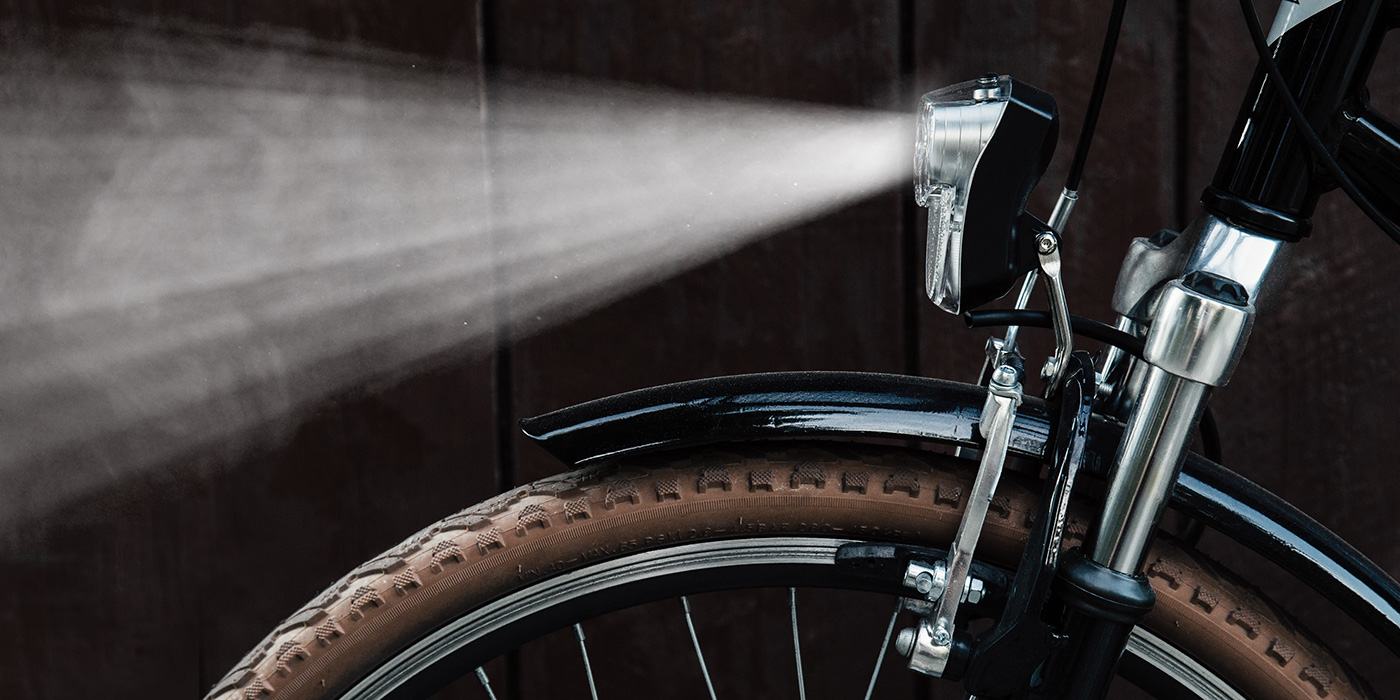 I’ve always thought of culture and sport as very separate entities. (Although I know the government would beg to differ with their department combining them). At my school people were either arty or sporty – rarely both. So I have to say I’d never thought about theatre and cycling in the same sentence. That is until we met Amy and Vanessa from Croydon Bicycle Theatre.

Croydonist: Which part of the borough do you call home?

Amy: Now, South Norwood, but my parents are still in the same house I grew up in in Coulsdon so I definitely feel I’ve started to get to know the different sides of the borough a lot better!

Vanessa: We both grew up in in the south of the borough and met at school. I live in Bermondsey, but my family and most of my friends are in Croydon. I wanted to come back because I missed it, so I was really pleased when Amy suggested we start CBT together!

Amy: Yes and no. Both cycling and the theatre are about journeys, new experiences and being asked to look at the world around you from a new perspective. The only difference between our work and a ‘static’ theatrical show is that we literally take you on a journey.

Croydon is amazing in that it has such a varied and diverse community with some beautiful open spaces to explore. Anyone who comes on a ride with us will see a new side of Croydon whilst learning something unique and exciting about our hometown. 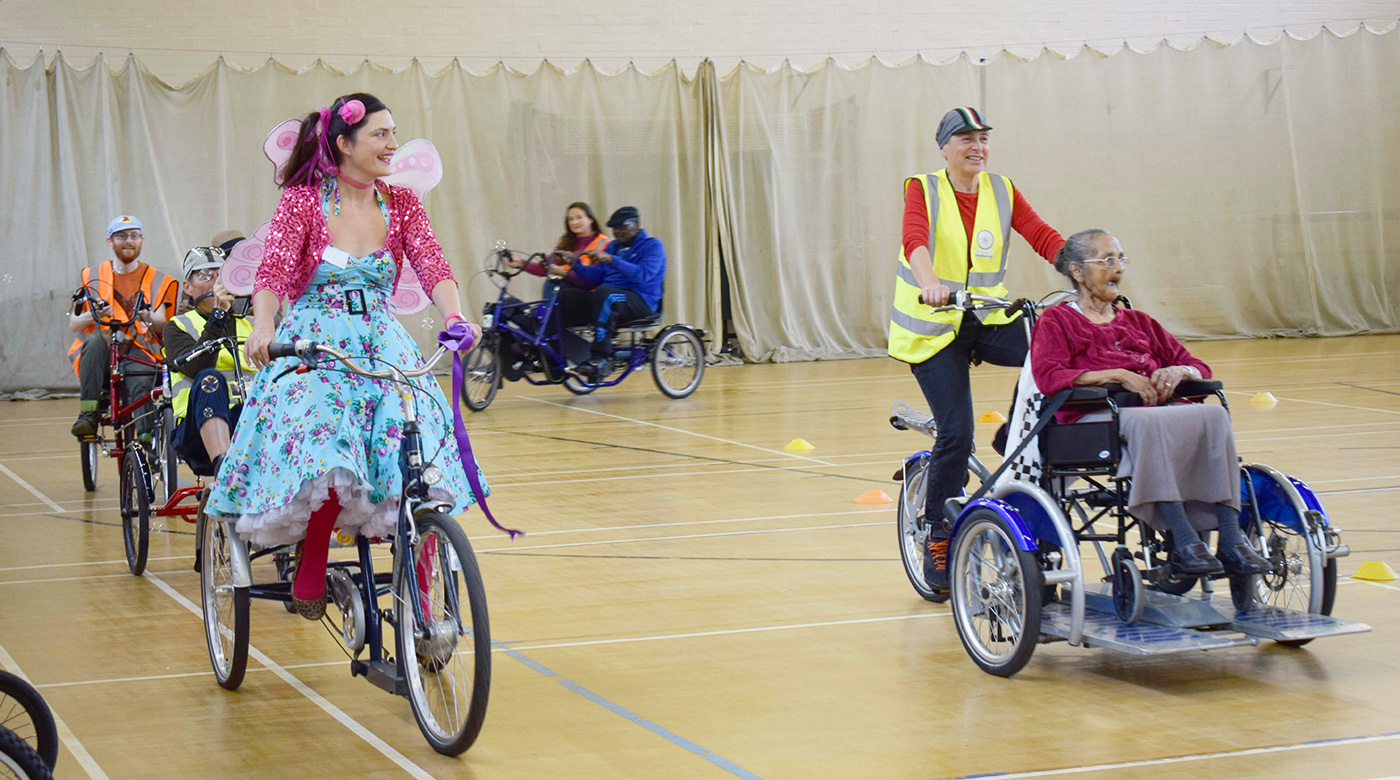 Vanessa performing at the Wheels for Wellbeing Birthday

Croydonist: Who are Croydon Bicycle Theatre?

Vanessa: We, Amy Foster and Vanessa Hammick are the core, but our shows are very much collaborative. Anthony Lewis, a performer and film-maker is one of our regular collaborators, as is writer and storyteller Miranda Roszkowski and are very much looking to work with other Croydon based artists and performers in the future.

Equally, the support we’ve received from the London Cycling Campaign and their incredible ride leaders has been crucial in making sure our rides are safe and successful.

Croydonist: We hear you recently completed a project in Arnhem, called #tandem2Arnhem – tell us more.

Amy: We hired a tandem bike in July and rode (with friends and family) to Arnhem, Croydon’s twin town.  It was a brilliant trip – because we had a great time – but also because it has really influenced what we want CBT to become and also as our most recent show was inspired by a story we heard on the trip.

For instance, we met a member of the Dutch Cyclists Union, who told us about how they’d used a choir as part of a pop-up bike lane protest. We’d love to think our work could lead to improvements to the cycling infrastructure in and around Croydon. So many of the people we meet are confident enough riding when they come out with us on a marshalled ride, but are simply too intimidated by Croydon’s roads to do it by themselves or with their families. 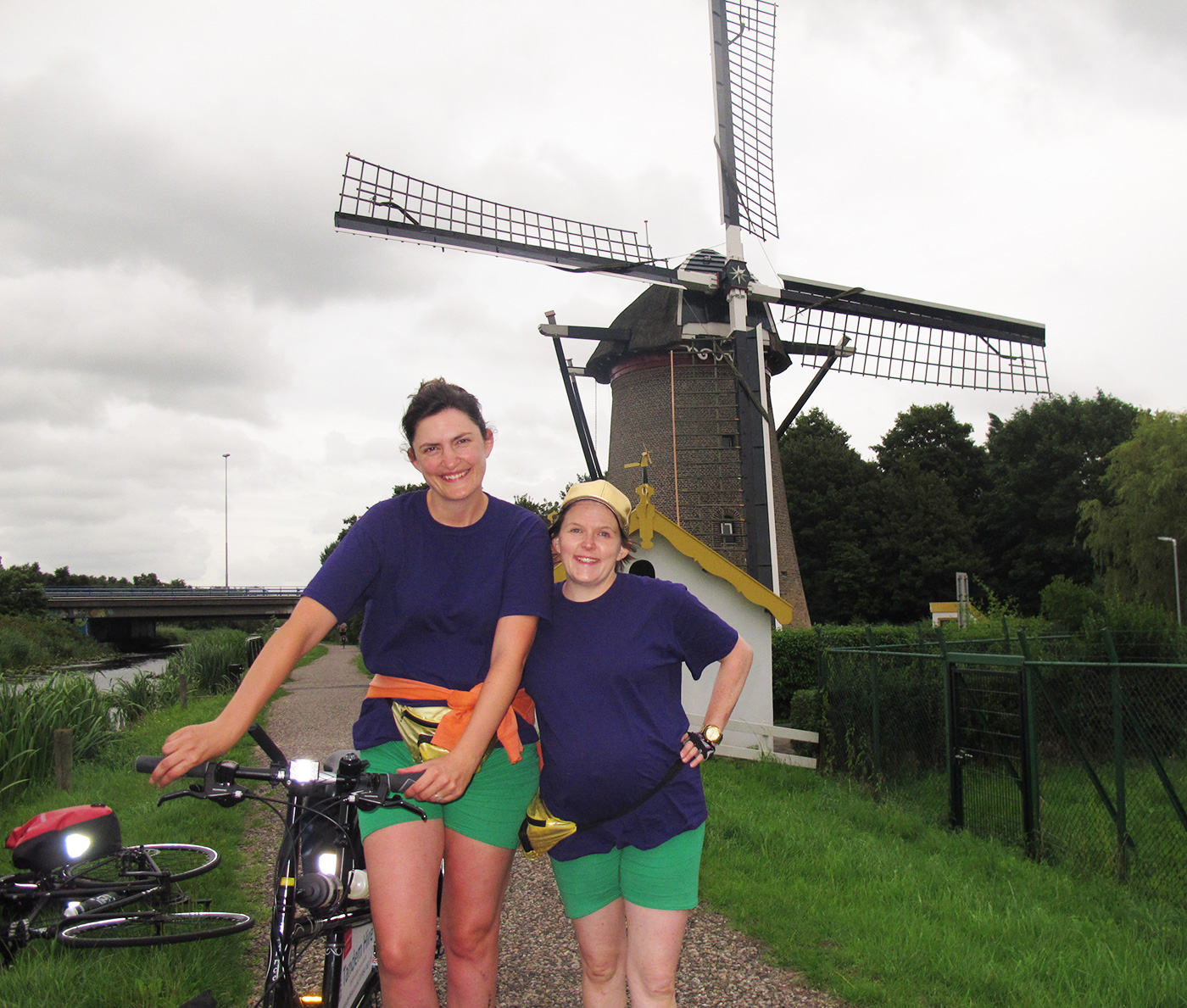 Vanessa and Amy on their trip to Arnhem

Croydonist: Where can we see you perform?

Vanessa: All over! We are currently trying to develop a regular annual programme so that people can really get our events in their diaries and look forward to them. Being bicycle based, our events will travel all over the borough, which we love. But lately we’ve also been doing indoor events, such as hosting Hackney new writing night There Goes the Neighbourhood at Boxpark, and a piece inspired by our trip to Arnhem as part of ZooCo’s Theatre On The Market on Surrey Street.

Croydonist: What are you working on at the moment – any exciting plans you’d like to share with us?

Amy: Being chosen as one of the five finalists for the Good Evening Croydon competition was absolutely fantastic. We’re crossing everything possible that we’ll be able to put our plans into action next year and are very much hoping that you’ll be hearing more about our dubsteb and Classical Croydon music tours over the next six months!

Vanessa: We’re also very much aiming to support the Borough of Culture bid. We wouldn’t be where we are today without the cultural and artistic opportunities we had available growing up in Croydon. The Croydon Clocktower will forever hold its place in my heart – it is such a beautiful building, and when we were teenagers it was the first place we ever took ourselves to see theatre. It was where I formed my identity as someone who enjoys culture as a leisure pursuit. We couldn’t have done that at such a young age if it wasn’t so local and so cheap. For us when we grew up Croydon had this very cultural centre and we want to do all we can to ensure that Croydon’s young people grow up with the same rich cultural life made available for them to access. 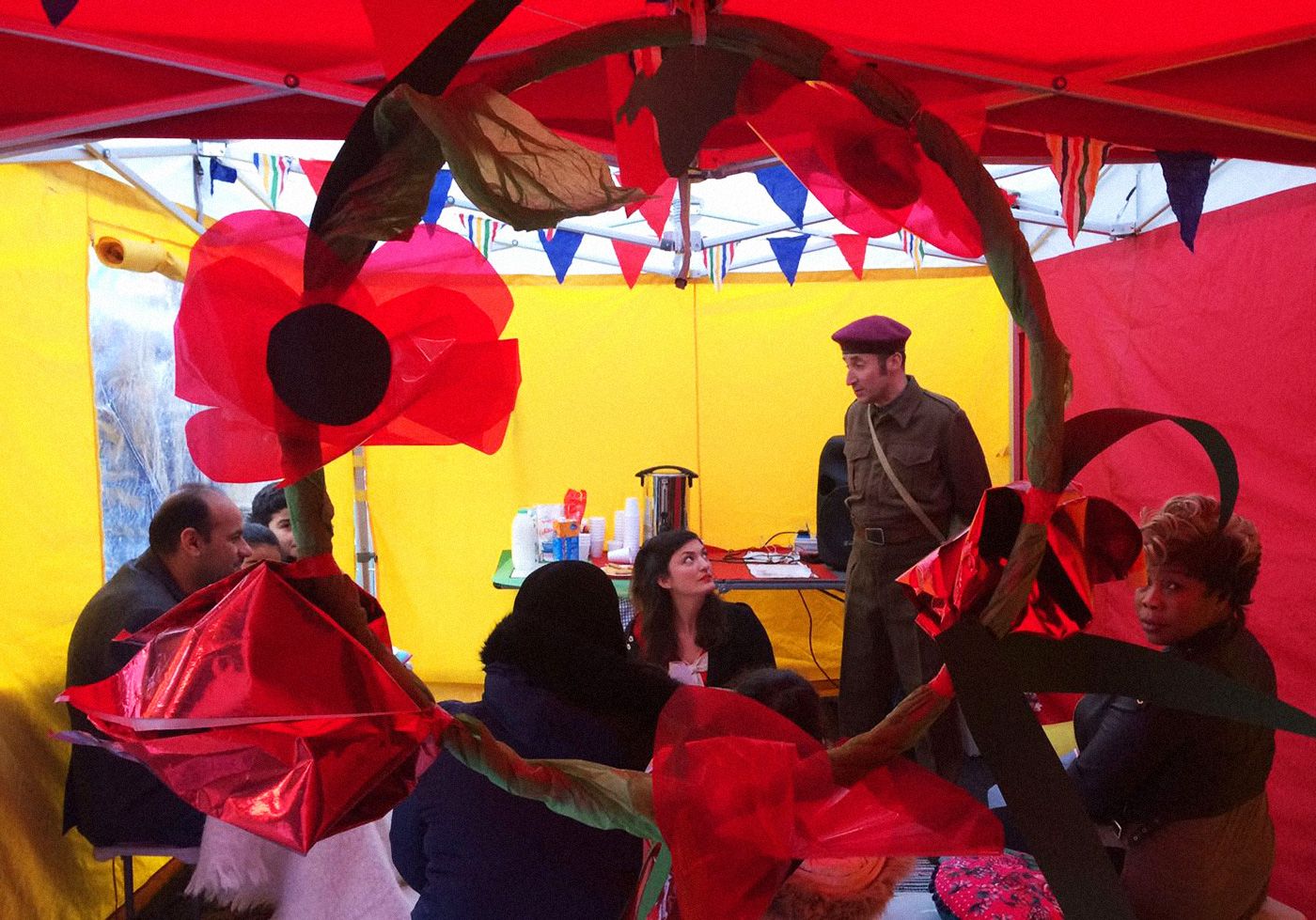 A Peculiar Kind of Twin, Theatre on the Market

Amy: The best aspect of a bike is that it solves so many of the major problems facing our government – obesity, pollution, congestion, climate change – it’s a wonder vehicle!

The worst aspect of bikes is the lack of safe space for cyclists. We’re really passionate about working to change this – it would be our dream for Croydon to get a world class cycling infrastructure that makes us the envy and inspiration of other towns.

Vanessa: The best aspect of theatre is its endless adaptability. There is so much variety out there – you could go to the theatre every night and feel like each time you’d done a completely different activity – it’s so incredibly varied. The worst aspect is those moments when you go to the theatre and it is really expensive and you feel like it is an elite and exclusive place with a narrow demographic. No one wants it to be like that.

Croydonist: Best and worst aspects of bikes and theatre combined?

Vanessa: The best thing is the possibilities, which are endless. The fun and the freedom of doing something really unusual is also great, as is the feeling of unity that comes from cycling together. The worst bit is the logistics, and what is so great for our audiences is that we do all of that for you! You just have to turn up and join in! I love doing rides that are led by other people – knowing I can just follow the crowd and not worry about directions is so liberating! 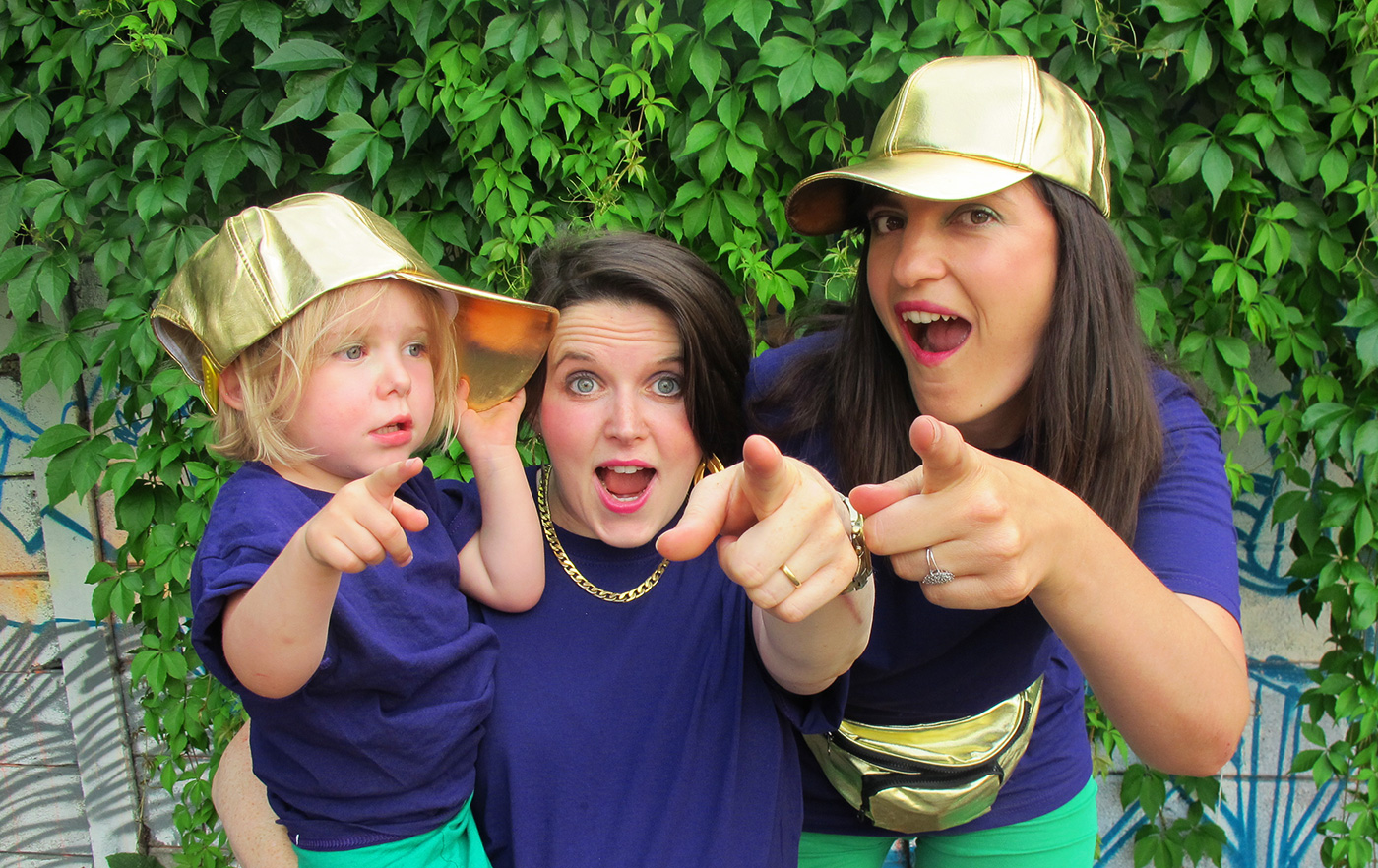 Amy and Vanessa with Edith (their Arnhem trip mascot)

Favourite spot for a coffee/glass of wine?
Amy and Vanessa: We’re very much into coffee and cake these days, after too many years spent sampling the delights of Croydon’s nightlife!
Coffee Craft in SE25 is gorgeous and we both love BYTE café at TMRW.  Their cake is very hard to resist and they are very tolerant of the amount of meetings we have there! On Sundays the craft market on Surrey Street Market does the most amazing coffee and food- and it is really good value.

Croydonist: Favourite gallery for inspiration?
Amy and Vanessa: Rise Gallery for all the amazing street art they have brought to Croydon. We absolutely love it.

Croydonist: Favourite cinema to get lost in a movie?
Amy and Vanessa: The Lost Format Society is amazing for its atmosphere – the flashing lights from the train tracks really added something quite special to our experience watching Mad Max there! But the David Lean will always have a place in our hearts for introducing us to so many wonderful films as a teenager and their programming is still really eclectic and the best way of seeing foreign films in Croydon.

Croydonist: Favourite place for an evening’s entertainment?
Amy and Vanessa: Theatre Utopia is very dear to us, but there are so many amazing new arts groups and experiences happening right across the borough. Though having to think about babysitting means we’re particularly into anything family friendly…

Croydonist: Favourite spot in Croydon to daydream?
Amy and Vanessa: Public transport! Growing up, it would have been the bus heading along the Brighton Road into town, now, definitely the tram.

Croydonist: Favourite greenspace for a wander?
Amy and Vanessa: Definitely Heathfield, where the Croydon Ecology Centre is. Lorraine who runs the Ecology centre is a living legend and her volunteers do such a good job at keeping the place running. But the Country Park in Norwood is also quite beautiful, and the walk through Farthing Downs to Chaldon Church is well worth making the trip out to zone 6 for. That’s what makes Croydon so fantastic – urban variety alongside rural diversity… it’s such an incredibly diverse place – definitely best explored by bike!

Thank you to Amy and Vanessa for chatting to the Croydonist.