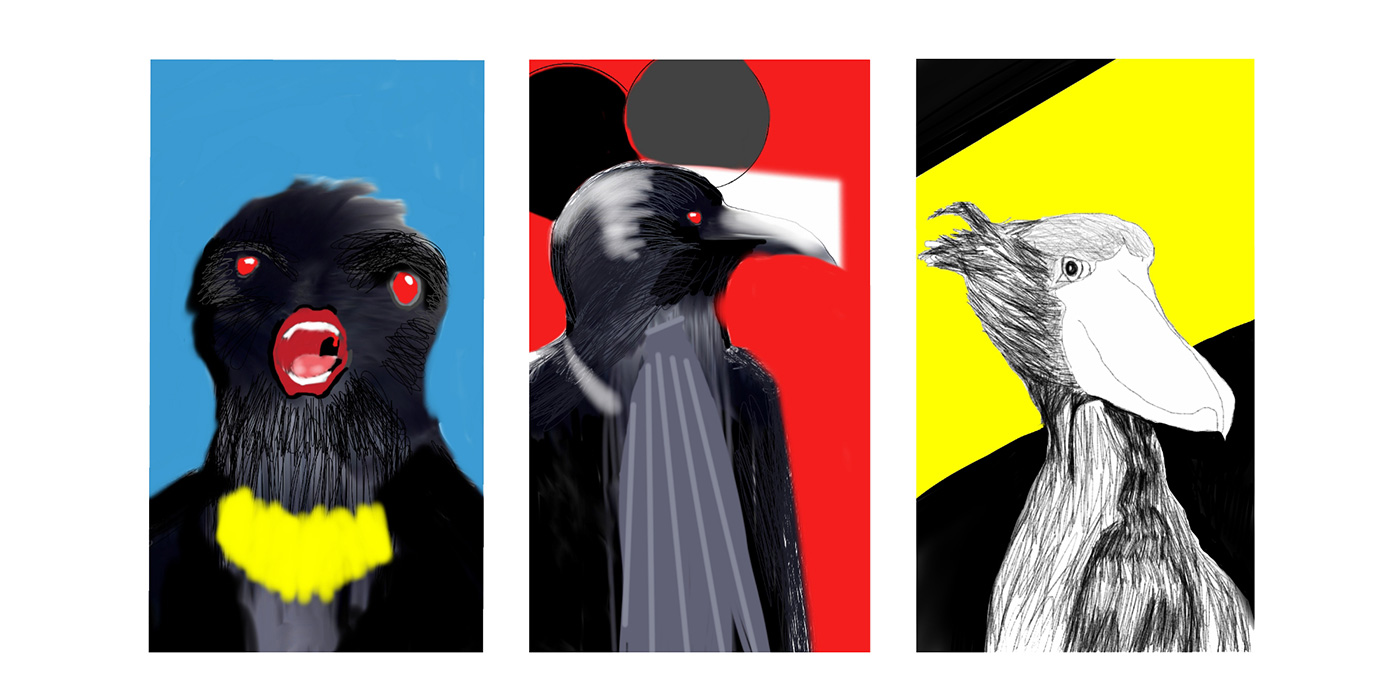 I very much look forward to posts from Angela Crow on Instagram. The vibrant diversity of her art often combining pattern, landscape and the human figure (with the occasional animal) lights up my feed, surprising me on a regular basis. You’ll recognise her work from our current social media headers (and indeed our header above), which showcase her triptych ‘odd birds’, exuding an oxymoron quality of being both sinister and joyful to look at – I love how she depicts the world in her art.

Crow cites some of her influences as African fabric and sculpture as well as 1940-1970’s modernism and African American artists of the 1960-1990s. We caught up with the artist for a chat about how she’s also inspired by our borough of opposites… 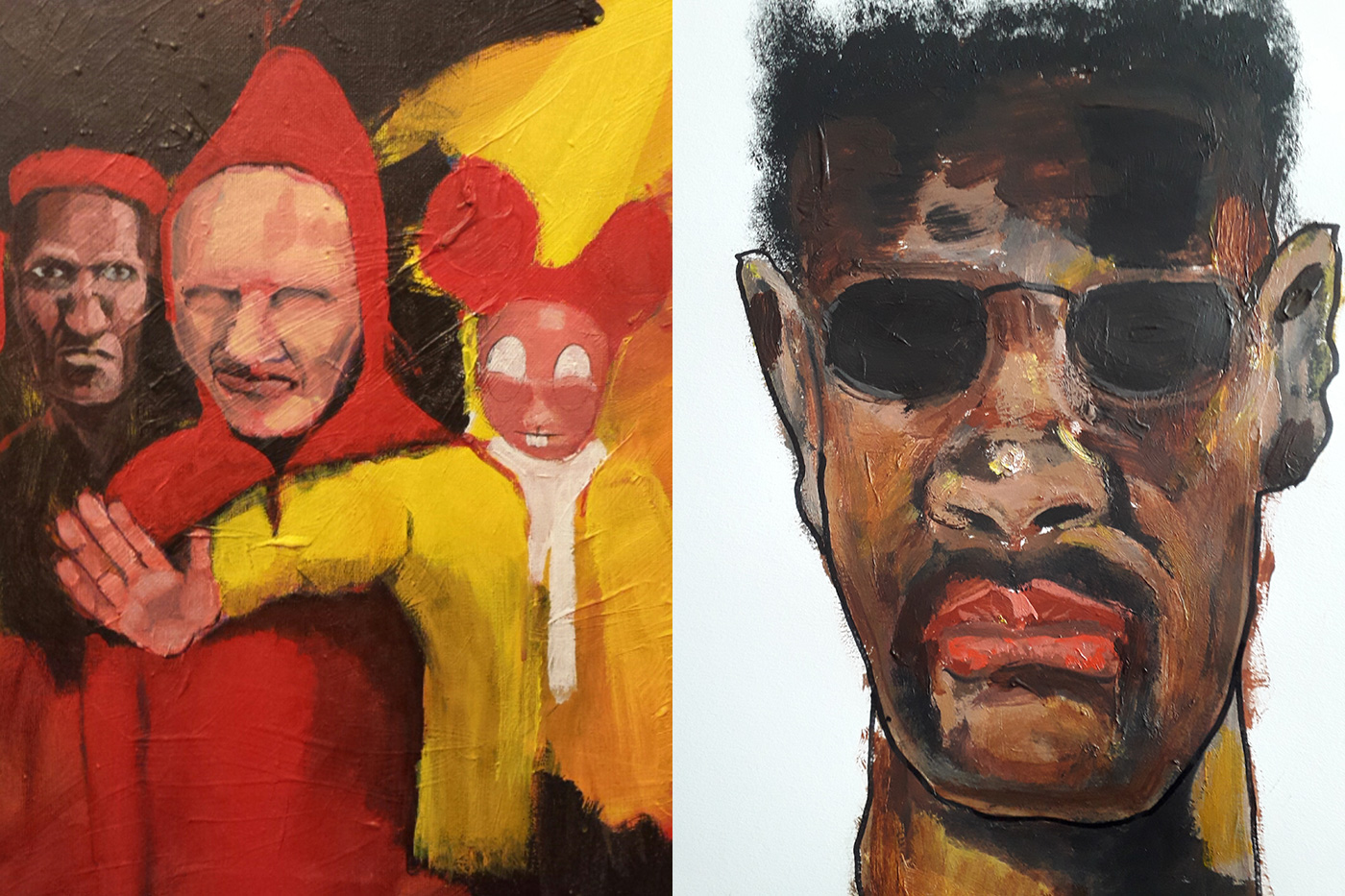 Angela: Although I was born in central London I have made my home in Woodside which is nice and convenient for Croydon, London and all points South.

Croydonist: Where might our readers have seen your work in the past year or so?

Angela: I’ve exhibited in The Whitgift Centre, where I completed a residency at a pop-up business school and I also had a few pieces in a group show at the Elizabeth James Gallery on Portland Road. I have Twitter and Instagram accounts which I post to a couple of times a week.

Croydonist: You describe yourself as a mixed media artist interested in pattern, landscape and the human figure. How did you get to where you are today?

Angela: I completed an art course when I was in my twenties and didn’t really do much art after that – life took over. Then about 5 years ago I did a couple of painting classes in Croydon which sparked my interest again. That is when I started making abstract pieces and collages.

Croydonist: You have a very versatile style – where does inspiration come from?

Angela: If you look at my Insta page from the beginning it does seem as if I have a lot of styles, but many are development pieces really. My main painting style now, in acrylic on canvas, is inspired by abstracts, urban skyline, the human form, nature, art exhibitions and the countryside. I also like using a digital colour box which inspires me to create odd works I might not have done on paper or canvas. 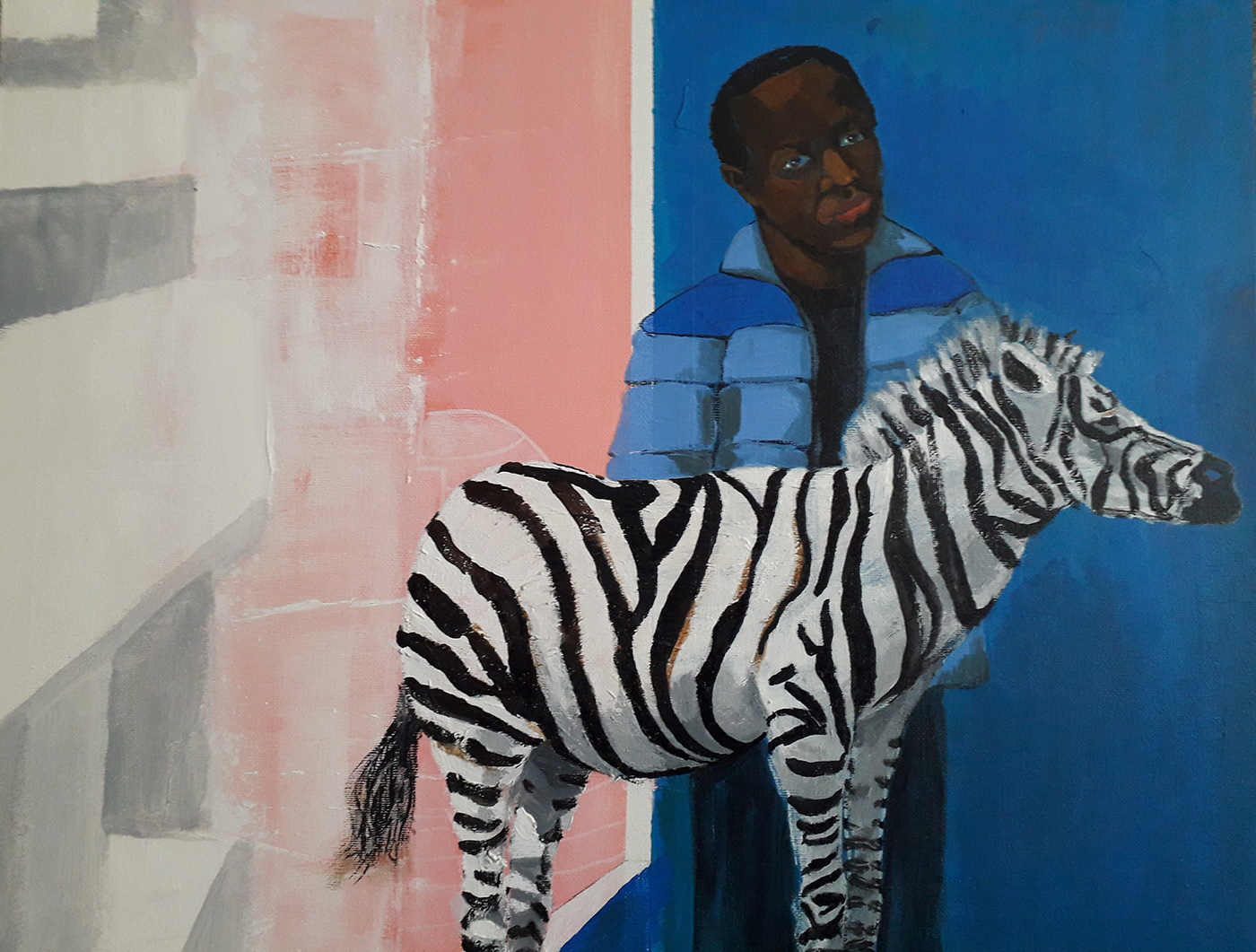 Croydonist: Where do you create your work?

Angela: I work mostly in my front room. It can be a little cramped, so when the need arises I take advantage of First Floor Space in the Whitgift Centre. It is an amazing resource to have in Croydon and has helped a lot of creatives and art groups flourish in the borough.

Croydonist: What’s been your most challenging artwork to date?

Angela: I started painting a multiple figure work 8 months ago. It’s on a large canvas I found propped up against the temporary fence around the bridge renovations at Black Horse Lane. It’s about half the size of my sitting room and continues to be a challenge just painting on it. I’ve not given up on it yet, but it is taking some time to complete!

Croydonist: How long does a piece usually take you?

Notwithstanding oversized canvases, an acrylic piece normally takes between 4 and 7 days to finish.

Croydonist: Do you have a typical process when creating your art?

Angela: With acrylic paintings I usually do an abstract design first and see if it suggests anything to me. Then I will complete a few sketches which I use to paint the finished work. With the digital pieces sometimes I may work from graphite or charcoal works on paper and ‘colourise’ them with doodles. I still do collages from magazine photos but at present I don’t exhibit these – they are helpful in developing other works. 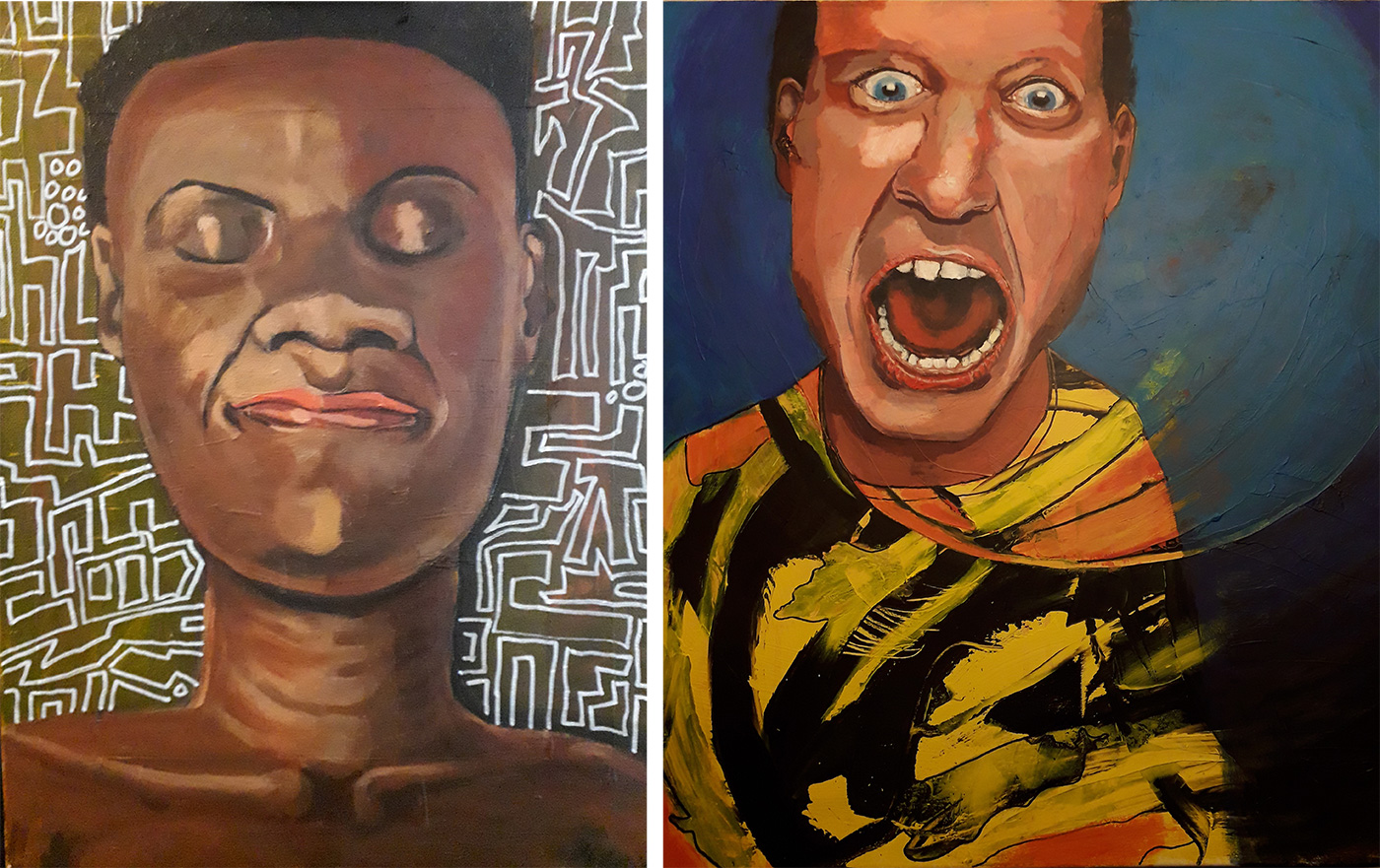 Croydonist: What part of Croydon helps you as an artist?

Angela: The great thing about Croydon is its duality of landscape. You can walk from urban to country to urban and park in the same afternoon. At present nature informs my abstracts, but the urban skyline is suggested and present in the final piece. The diversity of people and cultures in the borough is wonderful and I like to capture this in my work too.

Croydonist: Classic interview question – if you had to invite three artists or creatives over for dinner (dead or alive) who would they be and why?

Angela: Faith Ringgold, American artist most active in the 1960’s. Her American People series is astounding, mixing politics and pattern so powerfully. I’d probably pester her all evening trying to gain insights into how she created her pieces.

Jean-Michel Basquiat, also American who worked off the back of graffiti work in New York in the late 1970’s. I love his work because of all his influences on show in his work. Each piece is a deeply personal journey and I would have loved to ask him what all these thoughts meant to him.

Lastly, Caravaggio, because of his emotionally charged works and fantastic finish, but he had a reputation for hard drinking and fighting so I’m not sure I’d like to have met him!

Croydonist: What is coming up next?

Angela: I’ve been chosen to be in the First Floor Space group show in December. I’m on the lookout for a free or cheap studio too. 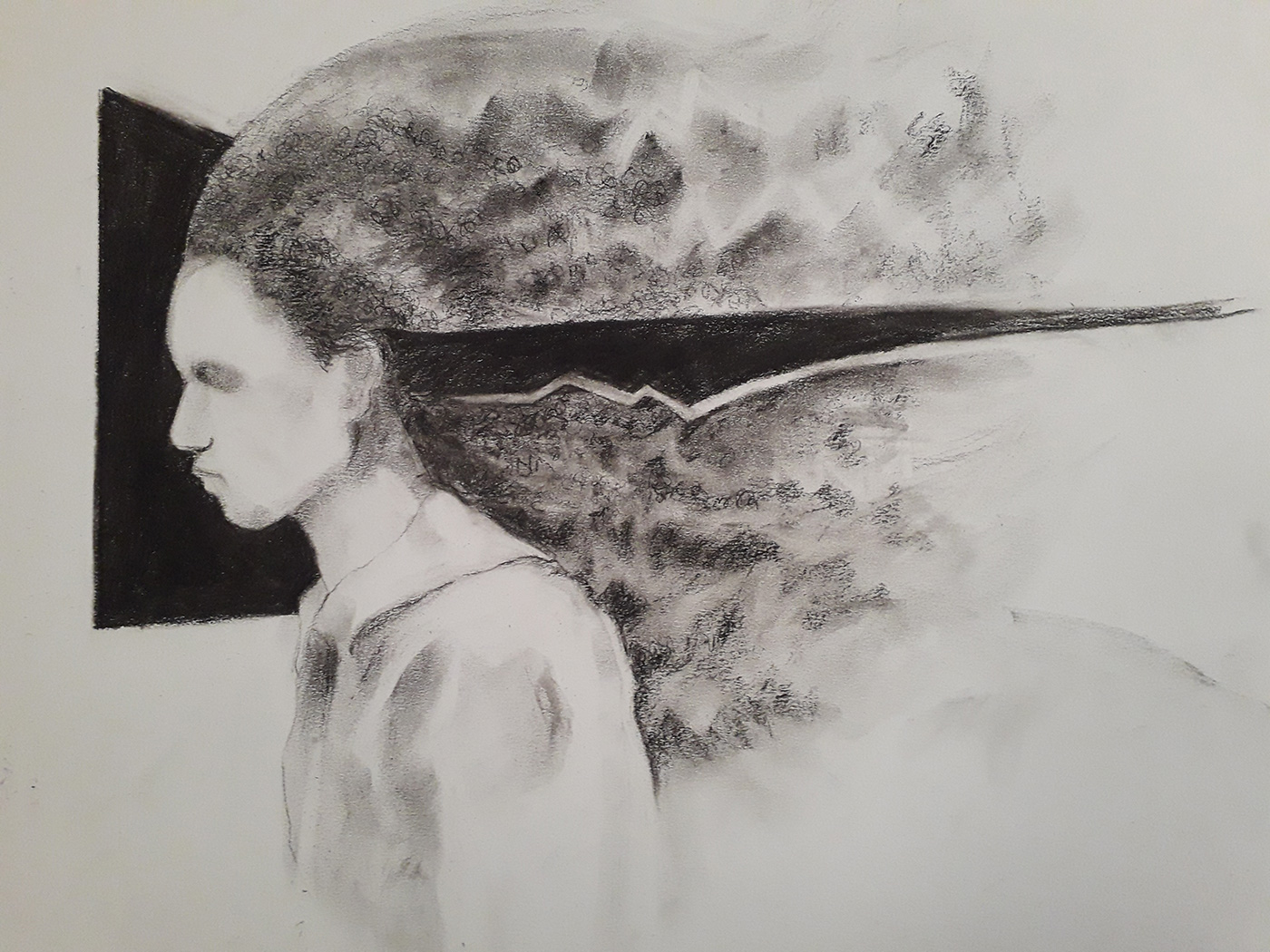 Thank you to Angela for chatting to us. Keep up-to-date with Angela’s work here, and be sure to see it in person be at First Floor Space from 12 December.

All images courtesy of the artist.