Last month we were invited along to the private view of ‘Laid Bare’ at Art Rebellion. There we met artist Bareface, the man behind the solo show. We were eager to find out more about his exuberant pop art style, so caught up for a chat.

Croydonist: Firstly, what’s your connection with Croydon and where are you based?

Bareface: it’s pretty deep rooted, I have lived in Thornton Heath for over 30 years.

Croydonist: We very much enjoyed your exhibition last month. Can you talk us through how you came to mix street art with pop art?

Bareface: As a child, I was obsessed with American pop culture. I spent countless hours in front of the TV watching American cartoons, action packed TV shows and reading comic books. My favourite movies, musical styles and pop stars were American and when I would role play with my action figures it would be in an American accent, so you could say I was americanised from a very young age. When I started to explore my artistic side in school, naturally it was influenced by these very things that sparked my creativity, so you could say I was always making pop art.

Through my americanisation, I discovered hip-hop and its many elements including graffiti which has now evolved somewhat with the explosion of street art creating a more fine art aesthetic. I always loved the look of the splatter and drips of spray cans and marker pens and it is something that I try to incorporate in every piece I do, tipping my cap to the style that I admire so much. 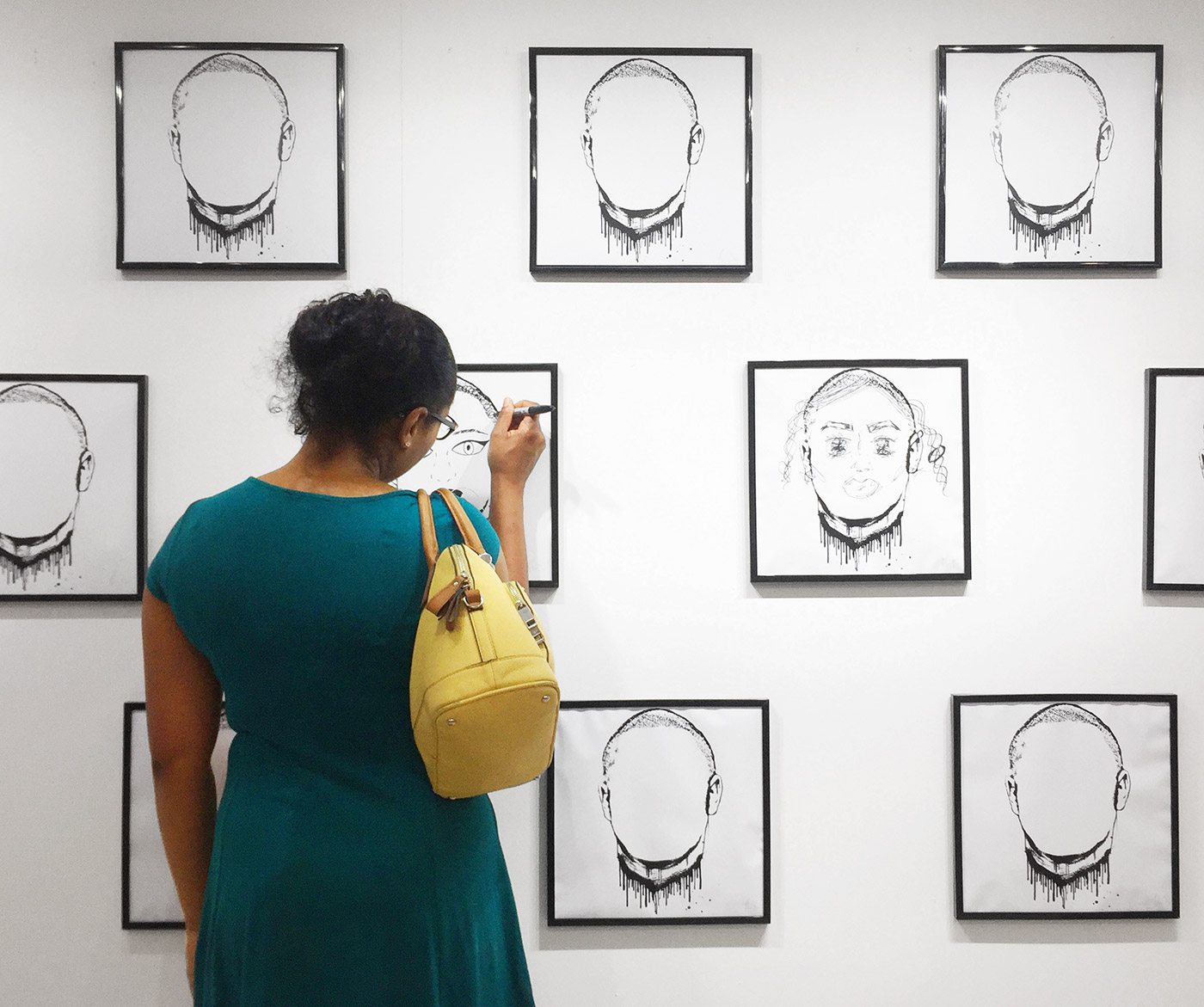 Croydonist: You had quite an extensive collection in your exhibition. How long has it taken to amass such an impressive amount of work?

Bareface: The show was part retrospective with a selection of current works. Some pieces go back as far as 2014 but the majority of the collection was created in the last year. I don’t sleep much(!) so I can see how I have managed to produce such a large amount of work. 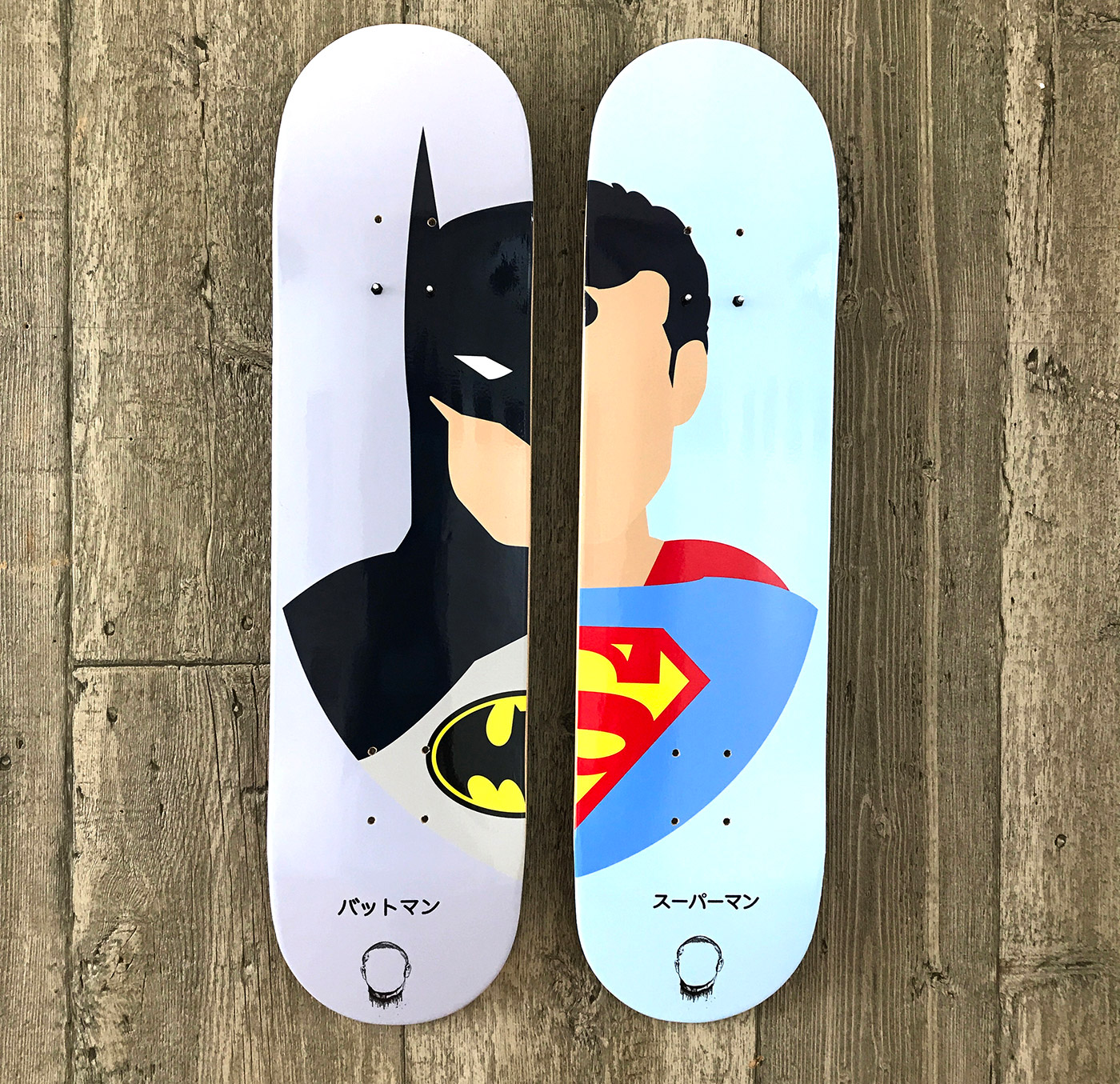 Croydonist: We hear you’re an avid screen printer – were you trained in the medium? And do you work more in analogue or digital processes?

Bareface: My work is primarily digital illustrations. I always admired the texture of prints that have been screen printed or letter pressed. I loved the fact that although each print in the edition is the same, each one has a subtle uniqueness to it because it was printed by a human, not a machine. In printmaking small imperfections are celebrated where as with digital work you feel you have to be pixel perfect. After months of research, I felt that screen printing was the best method to evolve my digital work. I enrolled on a course at Sonsoles print studio in Peckham last year and have been hooked ever since. I am quite methodical with my approach and screen printing fits that bill. The preparation process is quite meticulous, one wrong step and that will affect the outcome of your print. There are also a number of uncontrollable variables such as room humidity that could affect the speed at which inks dry up, so there is an unpredictability in every session that I love as you never know how it will go. Sometimes you win, sometimes you lose.

Croydonist: We particularly love your series Headlines & Deadlines, bringing superheroes into the realm of reality. Are all the news stories you choose real, and how do you decide on a cartoon character to pair them with?

Bareface: This series was inspired by the Marvel comic series “what if…” they published stories in an alternative reality and I wanted to explore what it would be like if superheroes were in our reality and unable to stop key real life historical events. I paired the specific disaster with a superhero to add more realism. For example, Spider-Man is a New Yorker so what if he was unable to stop the 9/11 terror attacks? Or what if Superman was unable to save President Kennedy from being assassinated? It humanises these superheroes because they fail just like we do. But it’s not all doom and gloom – I have Buzz Lightyear being the first man on the moon and Mickey Mouse reacting to Donald Trump being elected as president so I have thrown in some humour to the series too. 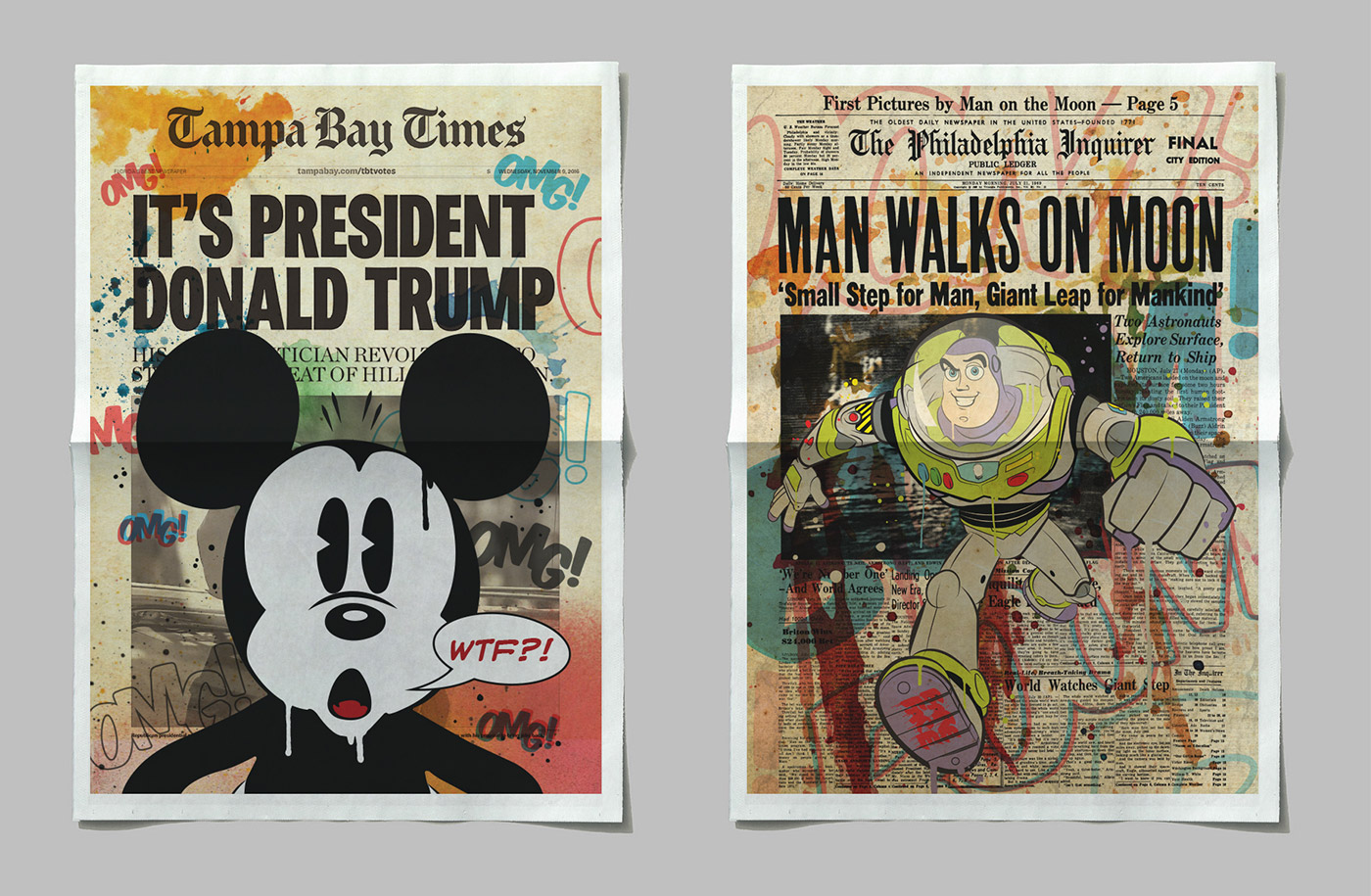 Croydonist: Any plans to extend the series?

Croydonist: You go by an unusual name – Bareface. Could you tell us a bit about this name and how it connects to your art?

Bareface: The people I was fanatic about growing up had an air of mystery about them, they had a sense of awe and wonder. Nowadays we live in a world where being accessible aids your success. We are in a sharing culture, putting everything out there for the world to see. I wanted to create an identity that was mysterious and made you question what it meant.

The logo is literally a bare face and they say that the face is the mirror to the soul, but in this “selfie” culture we live in are we really sharing our real selves? Or just what you want people to see? What’s interesting is that when I posted my logo on walls around London using a technique called Wheat pasting, where you create your own glue by mixing flour and boiling water, people would draw in them and send them back to me on social media so it’s also become a canvas for collaboration. These drawings became more of a true reflection of how they felt at that moment rather than a sultry selfie. Accidentally this became the true connection to my art, through collaboration. 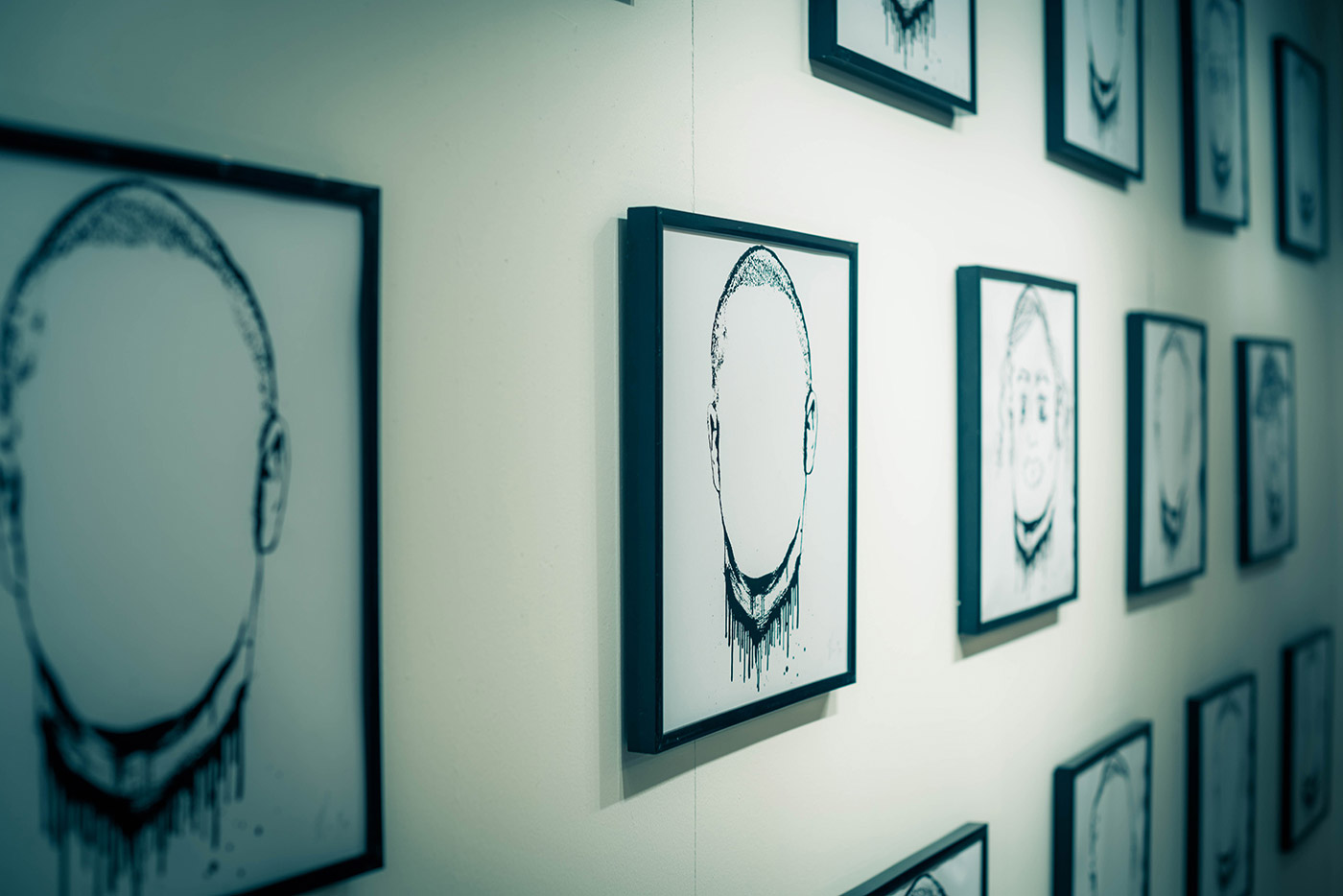 Croydonist: If we had to choose our fav piece of your work it would probably be ‘Under Attack’ which we’re currently showcasing on our social media headers. Could you tell us the story behind this artwork?

Bareface: Under Attack is a homage to my childhood. It’s about fantasy and role play. I would get a bunch of toys and use my over-active imagination to create a scene where the goodies go against the baddies. This piece harps back to that over-the-top playfulness I had as a kid. It features a lot of my favourite childhood characters too. 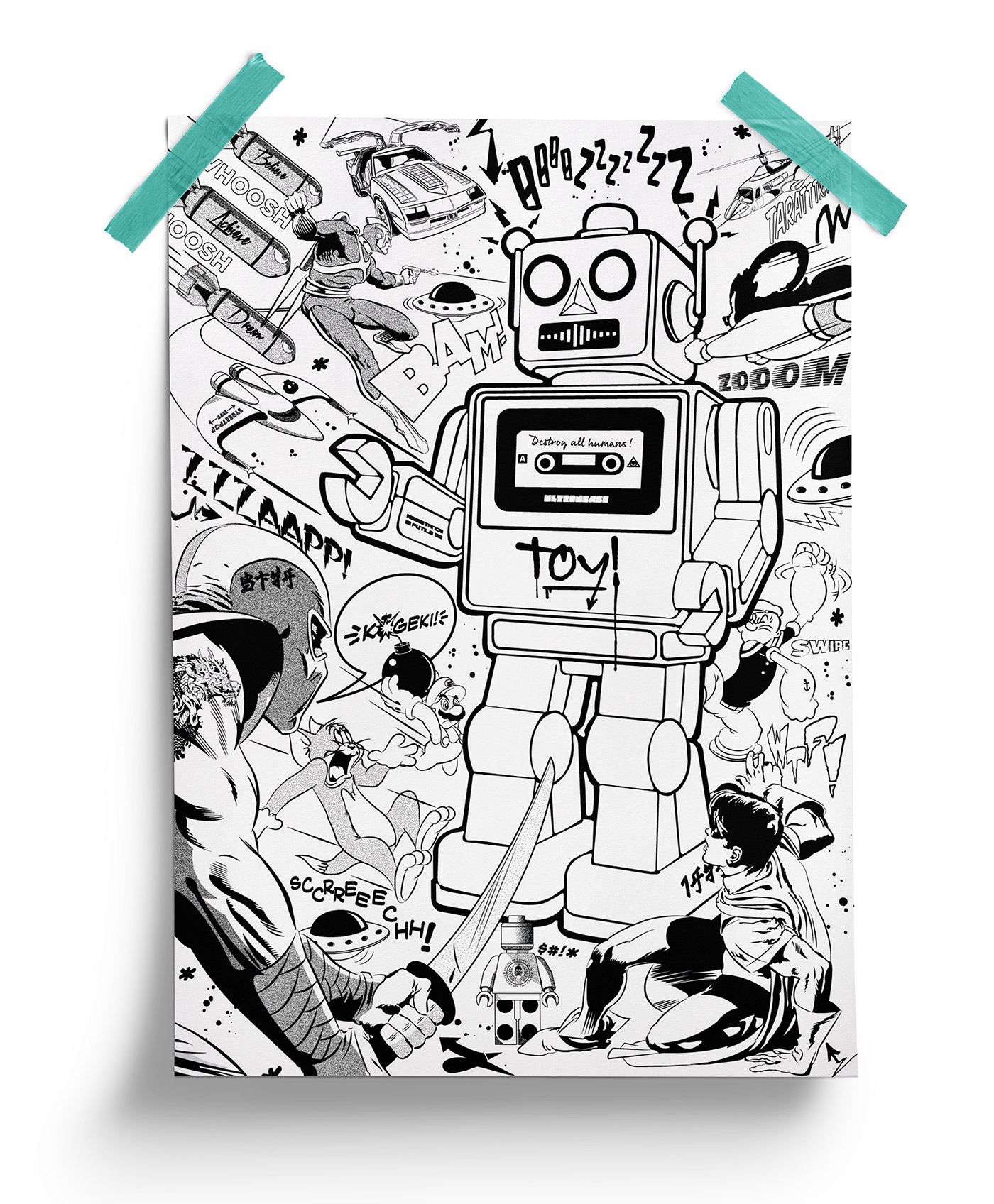 Croydonist: Do you have a favourite piece, and why?

Bareface: From my current collection, it’s definitely SURRENDER. It’s one of the most technical pieces I have made so it’s a bit of a personal achievement for me. It’s a 3D box print made from laser cut acrylic and a Giclee print underneath. The piece is about sexual tension and that moment when you are about to kiss someone and you surrender to the power that draws you into that person and you let go of all inhibitions and follow your primal instincts. 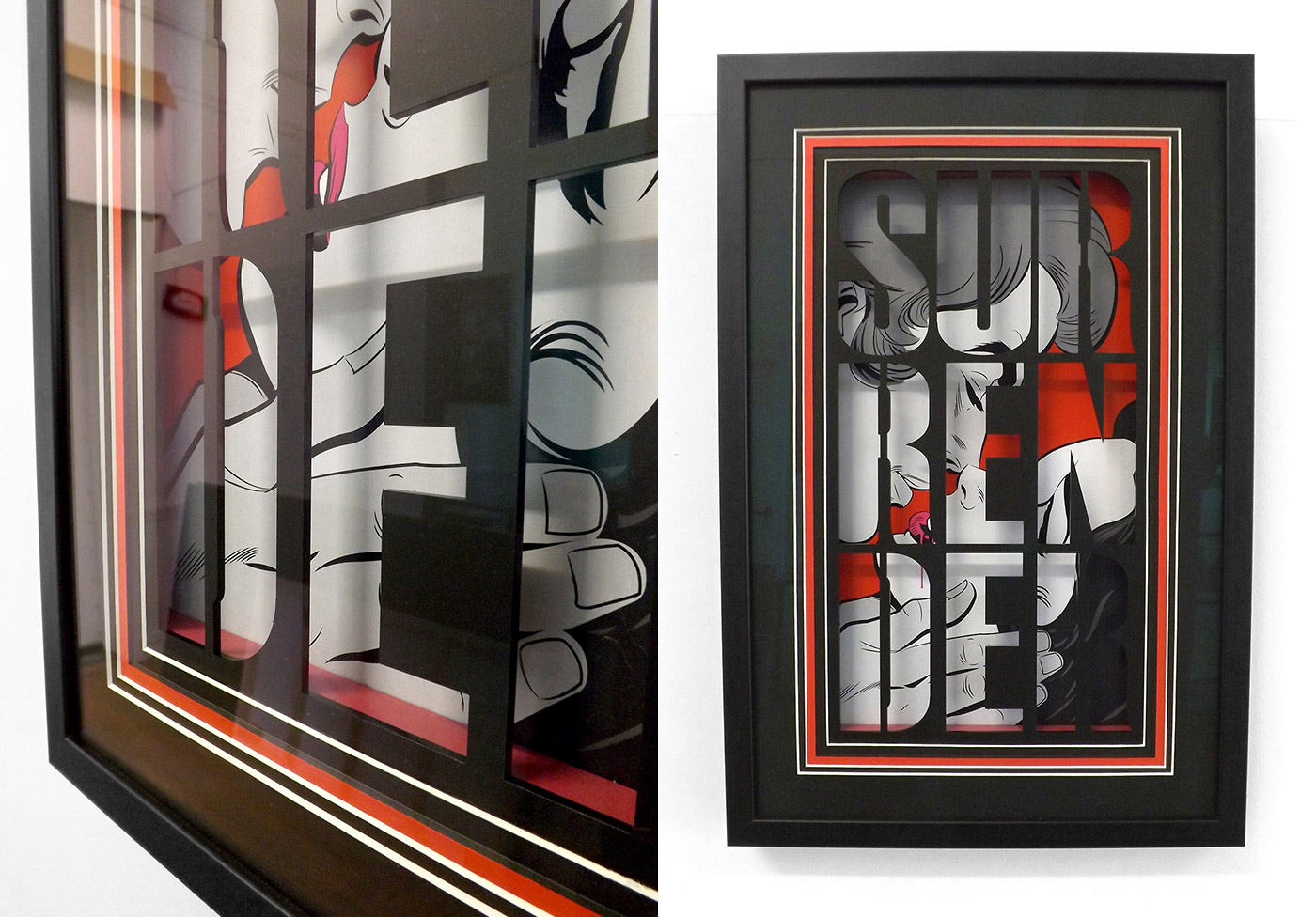 Croydonist: If you could go back in time when and where would you go and why?

Bareface: Oh, that’s easy the 80s! Everyone that knows me knows I am obsessed with 80s Pop culture, fashion, and technology. It was the decade I got my creative spark, it was the movies of that era that kicked the door to my imagination wide open, it was the mega pop stars that made you believe you could be anything you wanted to be. I would happily do it all over again, but I would go back as a teenager.

Croydonist: Just having finished a solo show, what’s next for you and will Croydon feature?

Bareface: I have recently taken part in the Croydon Street Art Jam put on by CDN Zine and RISE Gallery. The theme was Croydon musicians so I reproduced my Amy Winehouse piece as she was a Brit School alumni. I also have a very exciting project happening very soon with the Thornton Heath regeneration project where I will be producing a mural. I am really excited about this as it’s nice to make my mark literally on my doorstep.

Croydonist: We can’t wait to see it. Thank you to Bareface for chatting with us.

Images courtesy of Bareface (except girl drawing her portrait at Laid Bare exhibition, by the Croydonist)