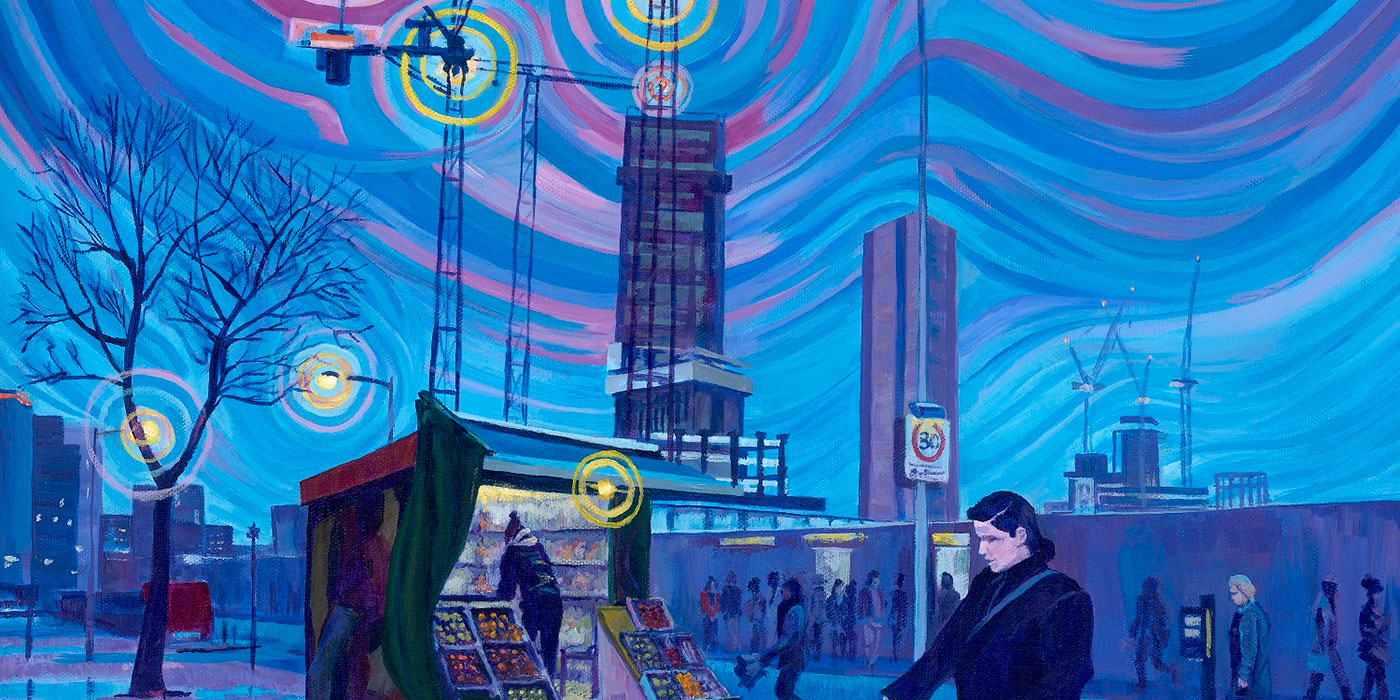 The clocks have changed folks. And we’re now into that autumn season. You know. One day it’s beautiful sunshine casting long shadows onto the pavements. Then the next, it’s umbrellas up to shield us from the hammering rain collecting in puddles across the tarmac. Why am I describing the weather? Well, we chatted to artist Bev Jones. Famous borough-wide and beyond for her depictions of everyday life, she captures Croydon in glorious technicolour, rain or shine.

Croydonist: First of all, what part of our borough do you hail from?

Bev: I live in Addiscombe, our road is part of the East India Conservation area although our block is not one of the reasons for that designation.

Croydonist: We hear you’re a Croydon convert, and originate from a small village in North Wales. How does Croydon compare, and how did you end up here?

Bev: Oh my word, I could write you a book on this question!

My parents moved out to North Wales from Nuneaton when I was just three months old. Back then North Wales was predominantly Welsh speaking especially in the small villages. So I grew up mostly speaking Welsh with my friends and at school, until going to secondary where there were more English speaking kids.

The landscape was never pretty but often awesome, there were hardly any trees and all the flowers were tiny and tough. You could hear the bus coming a mile away and every single car that moved in the village. It was very isolated. There was a post office at the far end of the village, nearly a mile away, the nearest pub was in a village about three miles away, the nearest proper book shop, cinema, theatre and railway station were in Bangor about 15 miles away. We made it there two or three times a year. I think there are probably more people living on my road today than lived within a mile of me back in the village.

Arriving in Croydon was a long and winding road! To shorten it enormously, I wound up going to St Andrews for university to study chemistry, but then took a gap year working with a charity for homeless people in London. I went back to uni but never really got back into the course and went off travelling afterwards. I bummed my way around most of Europe and a bit of the Middle East and celebrated the millenium in Sydney before heading back to London. At the time I thought I’d stay a few months but it didn’t work out that way. London caught me and I wound up living in a housing Coop in New Cross and working for a great little charity in Camberwell until 2008 when I fell in love with a lovely South African lady who happened to have a flat in Croydon. We were married back in 2011. 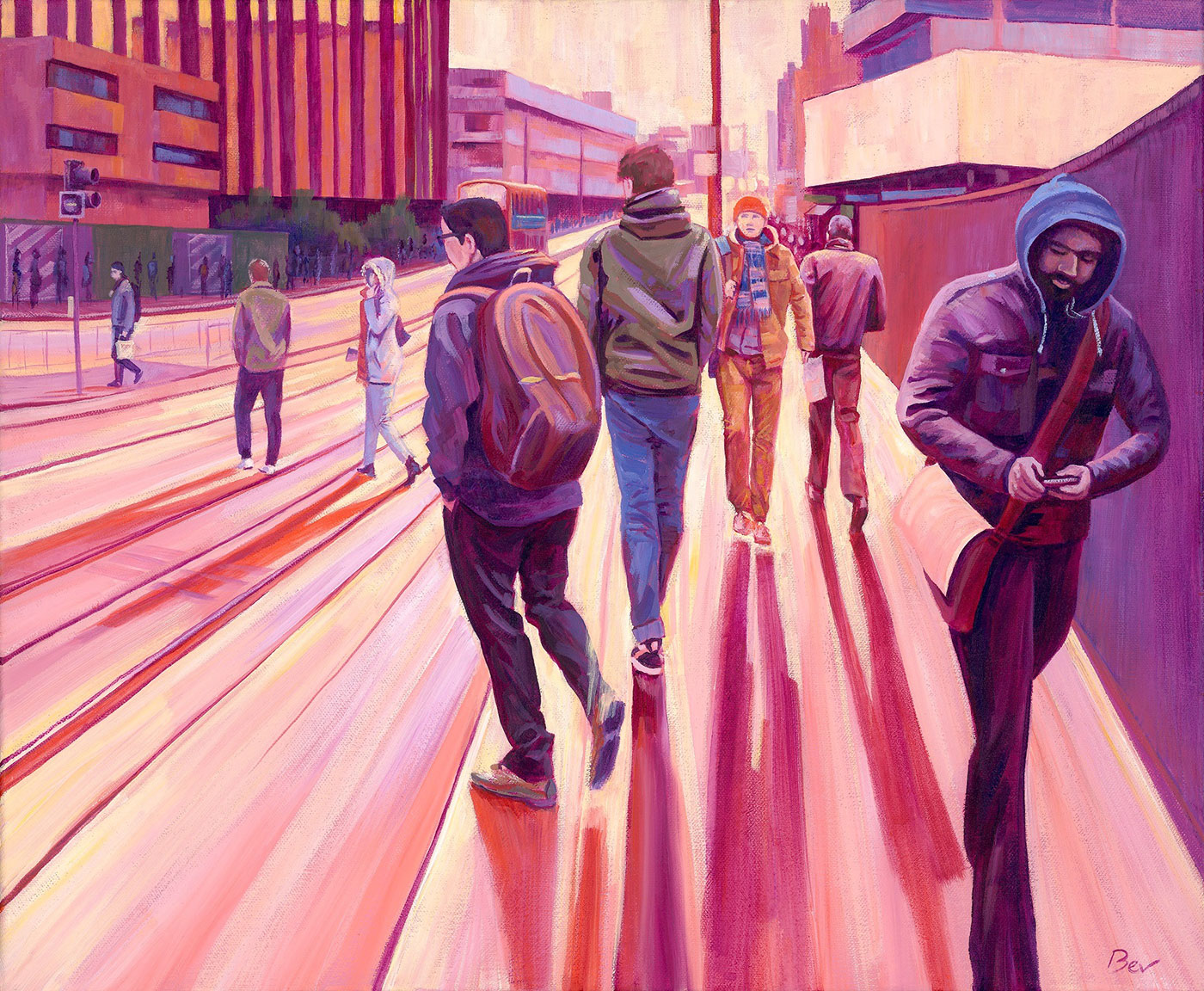 Croydonist: We think your Croydon street scenes are fantastic. Do you have a favourite piece of work to date?

Bev: That’s a difficult one, I generally love every painting until I’ve nearly finished it and then it suddenly becomes terrible and it feels like I don’t want to look at it ever again. Usually I come to appreciate them again after a while but it’s never as intense or satisfying a relationship as during the process of painting, and they all have different significances for me personally. Of the larger paintings I think perhaps ‘The Market in Sunshine’ is my current favourite as it was a coming into the light after quite a difficult period in my life, and I’m very fond of Surrey Street. I also have a soft spot for a few of the smaller paintings like ‘Bowls and Boxes’, ‘Carry Me Home’ and ‘Winter Rain’, I have a bit of a natural tendency towards making small paintings. 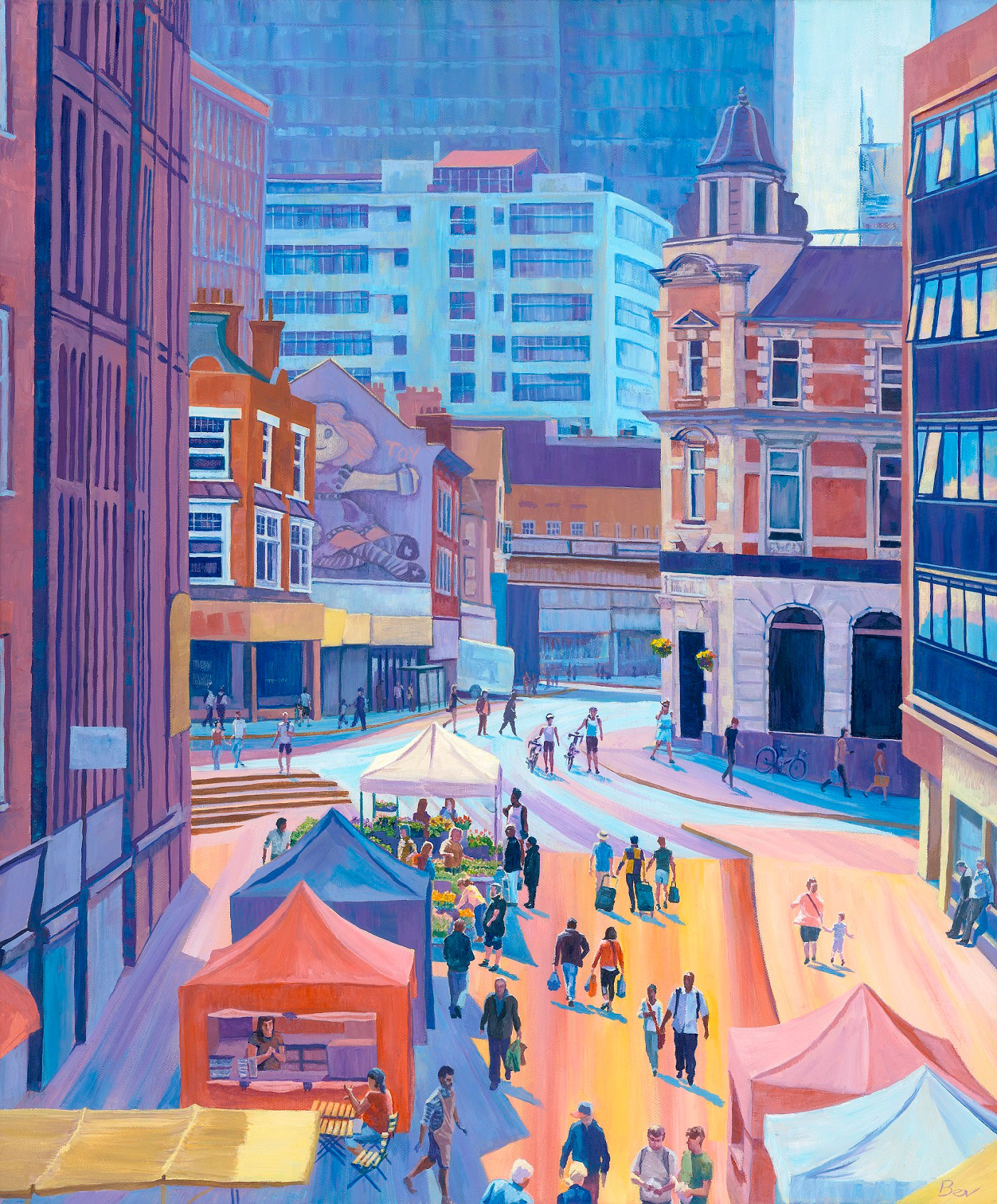 Market in the sunshine

Croydonist: How long does a piece like your Van Gogh inspired painting, Crane Lights take you to create?

Bev: A while! It varies and I don’t measure exactly but I do like detail and that adds time especially when I choose to paint crowds. Crane Lights was the first piece I produced at Stanley Halls and it took about three weeks to get it where I wanted it, but then it wasn’t one where I had to take a break and do something else in the middle so it came together quite quickly by my standards. 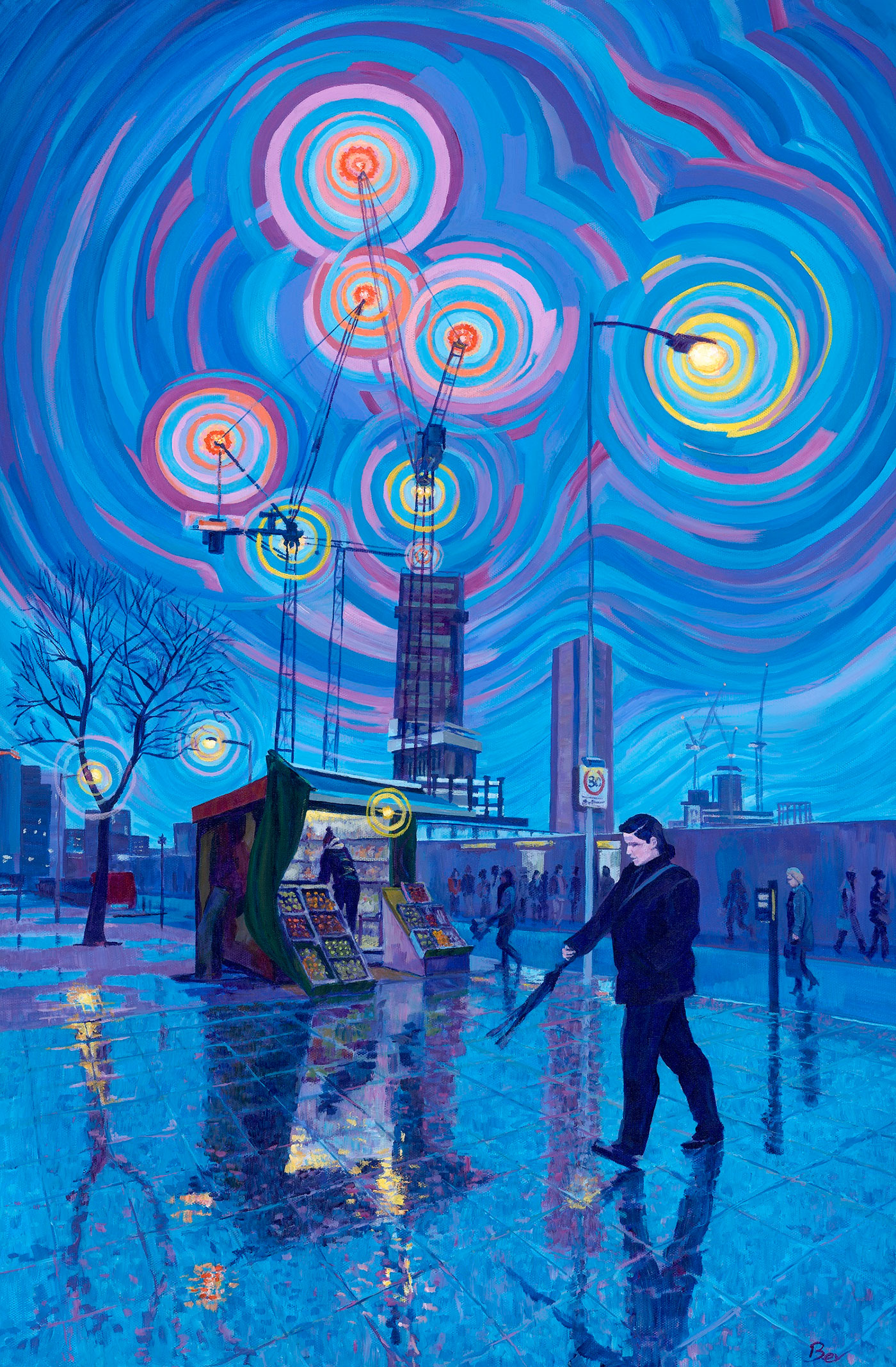 Bev: Several, the main one is Sandilands tram stop. It’s just at the top of our road and I’ve taken references there several times, but then the crash happened last year and that changes the associations around the place quite profoundly. I have loads of West Croydon references that I haven’t gotten round to working up yet too and then there is Norwood Junction and Selhurst. I’d love to do some from inside Selhurst Park on match day, more of the Wandle, more of Surrey Street, more evening paintings, more rain paintings, more of the bike race… So many wonderful local scenes to explore!

Croydonist: What has been your most interesting commission?

Bev: I’m just finishing one for a lady who does research into LGBT equality at work. It’s based on memories of the First Out Café and the poster by Tanya Chalkin of ‘The Kiss’ that was outside for a long time… It’s the one that said ‘We’re gay, get over it’ back when that was a radical thing to point out. The subject is quite different from anything else I’ve done so far and it’s been fun pulling in various cultural and personal references for it. 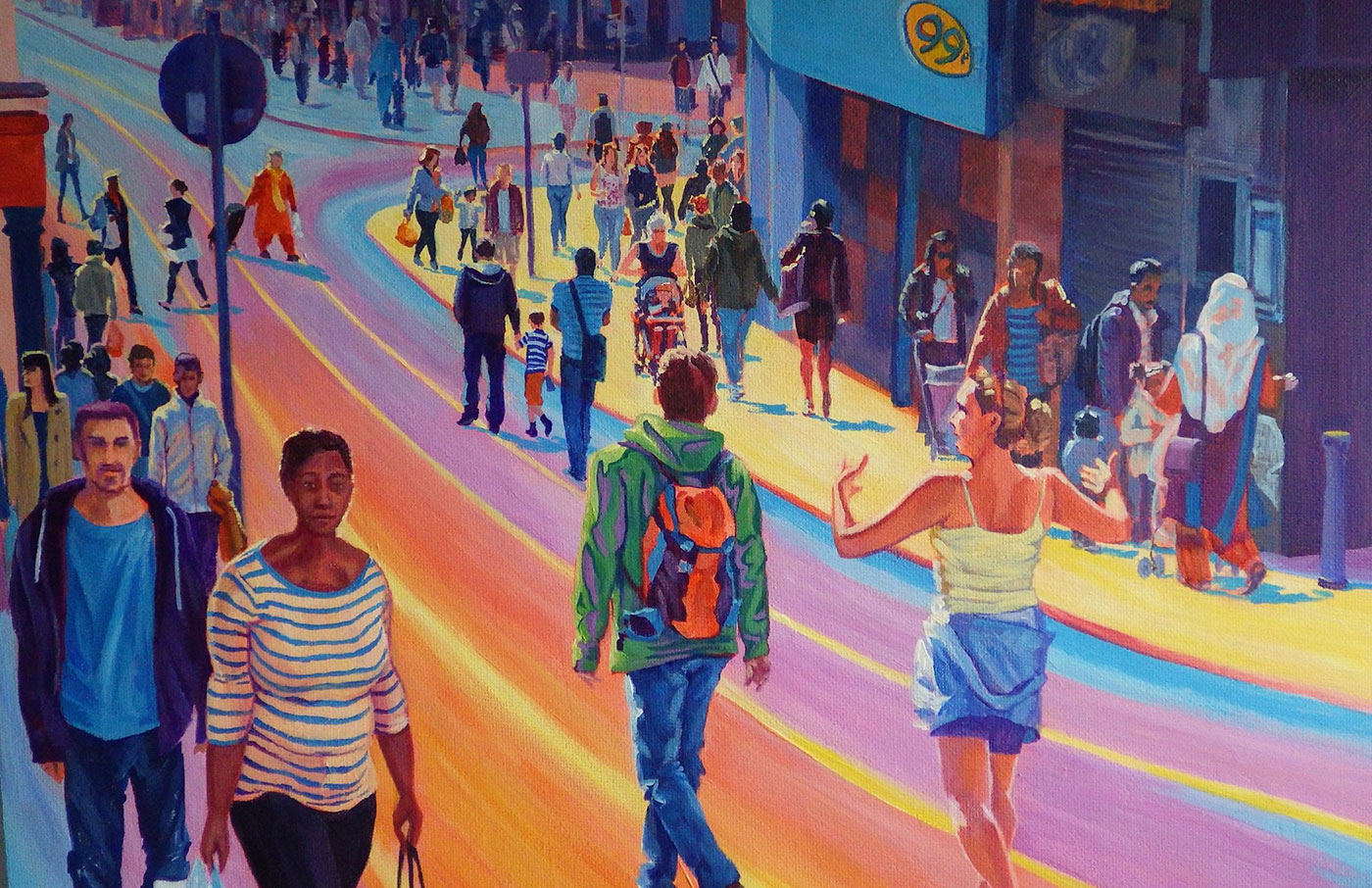 Croydonist: Random question time – which three artists would you invite to a dinner party and why?

Bev: I’d start with one of the monks who illustrated the book of Kells. We don’t know much about them as individuals, and the intensity of concentration needed to do that work with the tools available back then and in the conditions they lived in must have been astounding. I’d love to know more about the culture that lies behind all those patterns and motifs.

Van Gogh of course. If nothing else he’d appreciate a good meal and to know how much his work is respected these days. Plus, if his letters are anything to go by he’d be a pretty engaging guest. I wonder what he’d make of ‘Crane Lights’?

The last space goes to Wassily Kandinsky – he had some really interesting ideas about the relation between art and spirituality plus I’d love to know what he makes of where the abstract movement has now come to. 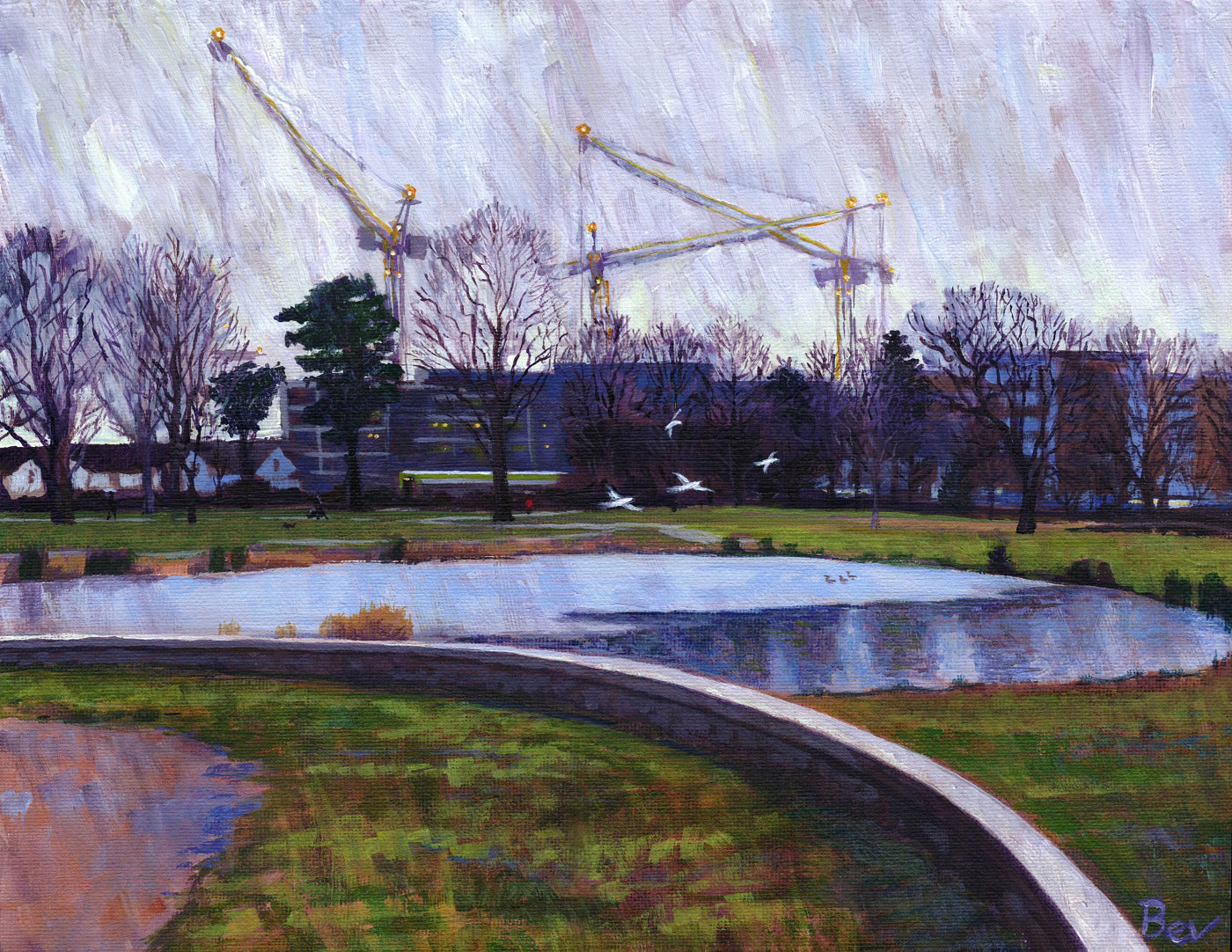 Croydonist: What have you got planned for the rest of the year and 2018?

Bev: My leaf paintings are out at the Paxton Centre until the end of October and at the Sustainability Centre in Petersfield until early 2018. For the city paintings I’m going to be out at Surrey Street for a time or three before Christmas but exact dates will depend on the weather, so watch out on Facebook. I’ll be with the ‘Handmade Palace’ folks on 9 December in the Crystal Palace Subway and hopefully the ‘Made in Croydon’ folks will announce a date or two that I can do for other local markets. Next February I’m due to be ‘Featured artist’ with the folks at ‘Studio Upstairs‘ on Park Street. 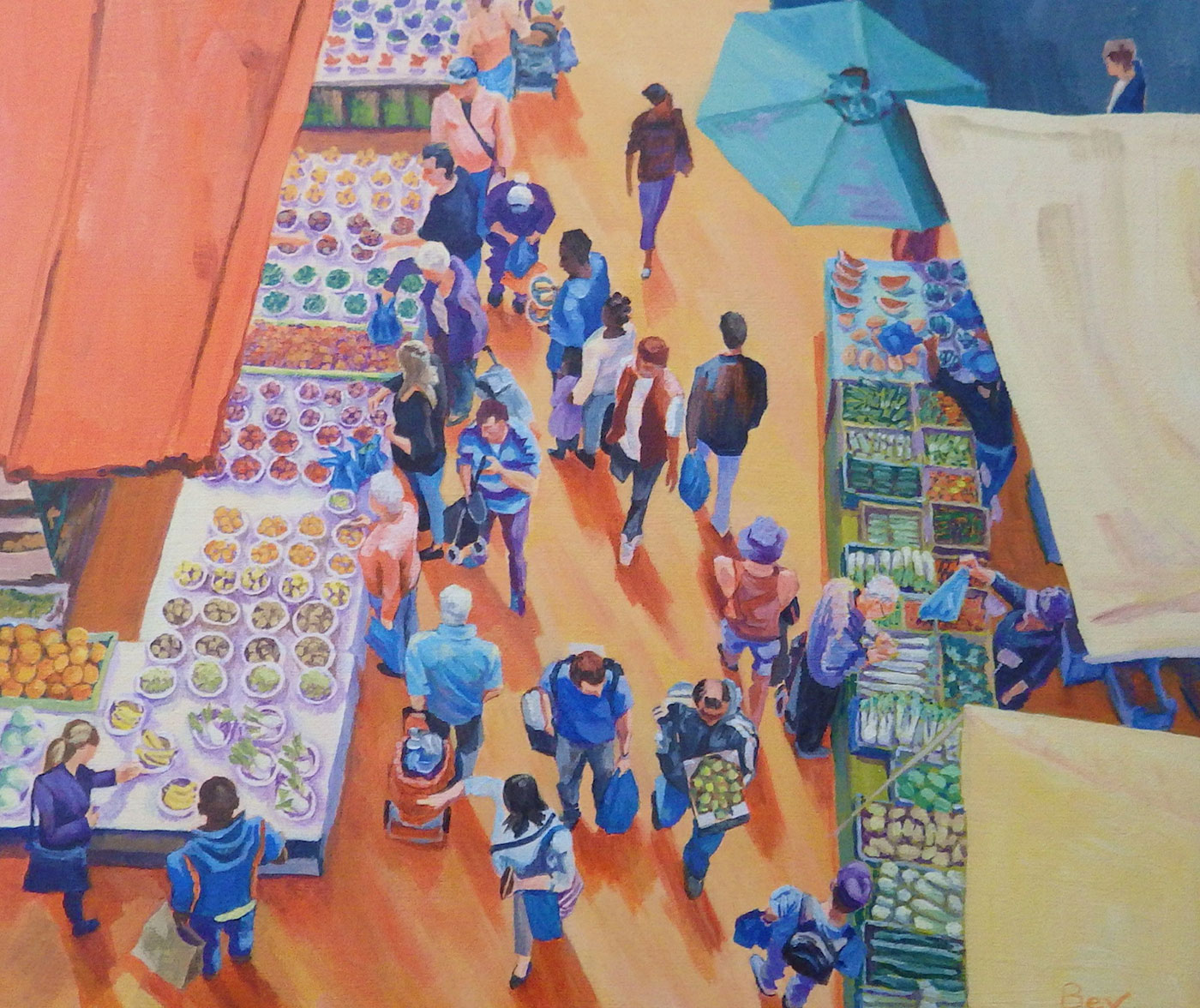 Croydonist: Favourite spot for a coffee?
Bev: In town I think Smooth Bean has the best coffee going. But they make a pretty mean cuppa at Coffee Craft in South Norwood too, and well Addiscombe has two great offerings in Adagio and The Tram Stop.

Croydonist: Favourite gallery for inspiration?
Bev: I’m not a massive fan of formal gallery spaces to be honest. For inspiration I’d much rather take myself off to sit and watch the crowds in a railway station or a market somewhere, or have a wonder down the river, perhaps listen to some music – something like that. On the whole I prefer spaces like Matthews Yard, The Paxton Centre or even the Clocktower Café, to more formal art settings. I just tend to experience most of those as unfriendly and exclusionary.

Croydonist: Favourite greenspace for a wander?
Bev: Gosh there are loads of great green spaces in Croydon – for times when I feel emotional I go down and walk the Wandle. Most of the time though my favourite walk is up through Lloyd Park with a link on through Addington Hills to Croham Hurst. It feels almost wild in places, plus it’s hilly and it has loads of trees and a great lunch stop at the Coach House Café.

Croydonist: Favourite area to shop?
Bev: Surrey Street. It’s the only part of town I go shopping in for fun and even when I’m not shopping I love walking round the market.

Croydonist: Favourite place for dinner?
Bev: It used to be ‘Sitar’ in Norwood Junction but for the last few years they only do take out, so we mostly go to ‘The White Bear’ out in Warlingham if we want to eat out… or to Nandos if Mel fancies a reminder of South Africa. 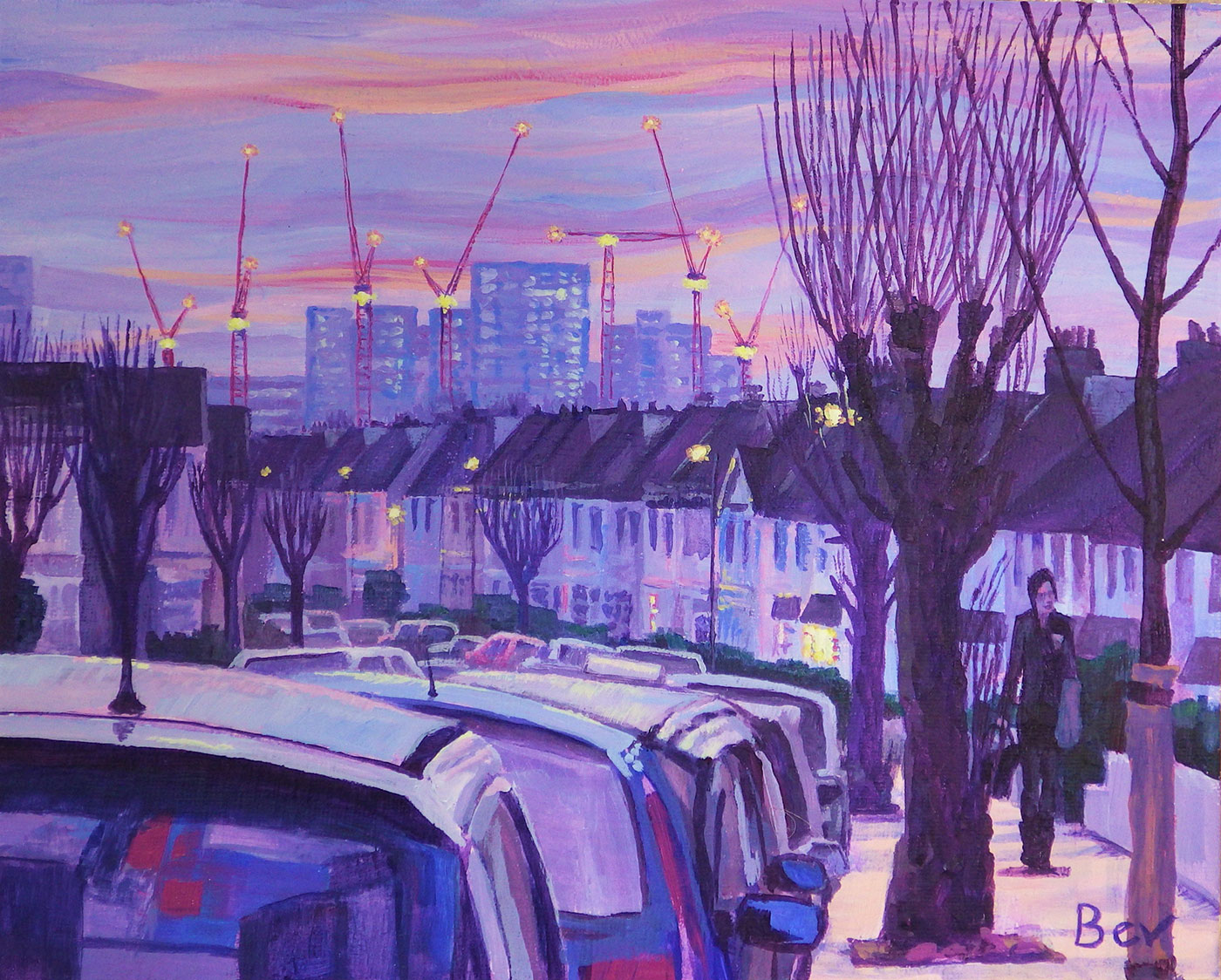 Thanks to Bev Jones for chatting to the Croydonist. You can see more of her work here.

All photos courtesy of Bev Jones.

Love your work Bev. If you ever feel like travelling north in the borough the Heath could do with a bit more culture, please!