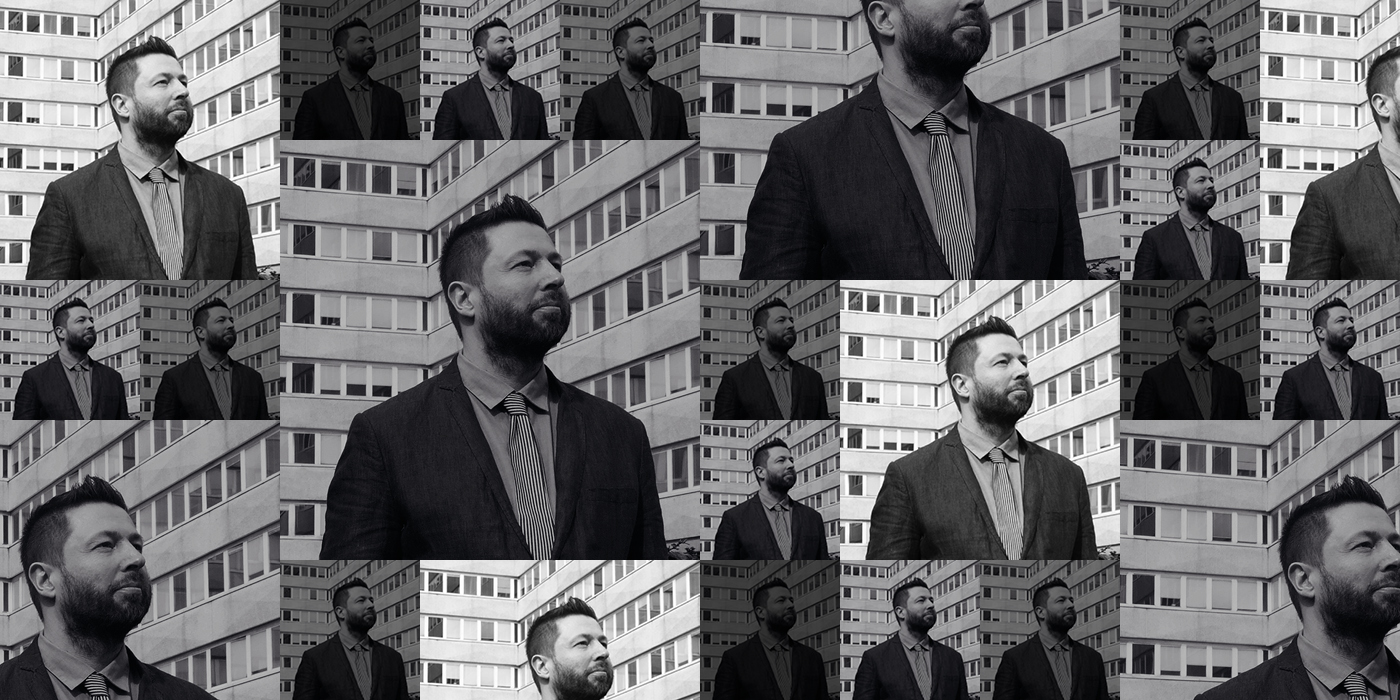 As you probably know by now, we at the Croydonist are massive fans of the concrete monoliths that soar over our town centre – I don’t think we’ll ever tire of their angular shapes creating Croydon’s skyline. Therefore I couldn’t have been more excited to chat to John Grindrod – one of our borough’s most famous living authors, and champion of Croydon’s architecture – as his new book ‘How To Love Brutalism’ is released this week.

Croydonist: You’ve been a busy man recently with ‘Outskirts: Living Life on the Edge of the Green Belt’ published last year and ‘How to love Brutalism’ coming out this week  – how long did each book take you to write?

John: ‘Outskirts’ was a labour of love, as it includes a lot about my family as well as the story of the green belt, so there was a lot to try and do justice to. That one took about 3 years to research and write, and I was lucky enough to be able to take 6 months off work to focus on the writing. It was lovely to spend time writing about my parents, as well as investigating lots of quirky stories about our green belts, from nuclear bunkers to ramblers. ‘How To Love Brutalism’ is a much shorter book and was much quicker to write – probably about 8 months. 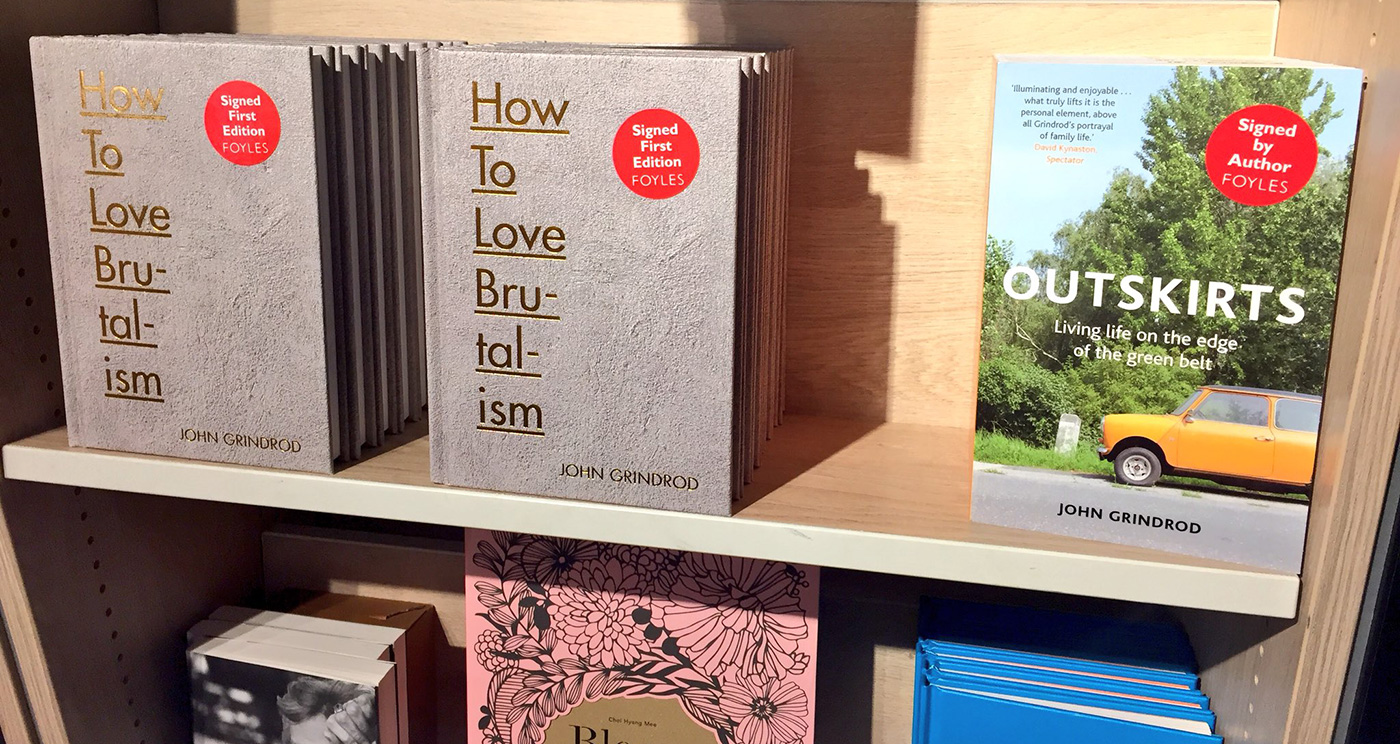 Croydonist: When you write, do you have a set structure or does it happen more organically?

John: Because I’ve always had 9–5 jobs I’m pretty disciplined about writing. I work 3 days a week now, and so on my 2 writing days I get up early, and try to work through as long as I can before my brain turns to mush. When I get bored or annoyed I take the laptop out and sit in a café or pub and write there. A change of scene does wonders.

Croydonist: We like to think of Croydon as a true mix of town and country. Growing up in New Addington – the housing estate on the edge of woodland – we imagine that you lived this Croydon half/half – how much do you think your childhood environment informed your career as a writer?

John: You’re right to think that living on the edge of the estate in New Addington helped inspire me to write. Not feeling part of the town or the country meant that my family felt a bit marooned there in the 70s, 80s and 90s. I was always a bit of a loner, and living on the outskirts meant it was easy to drift into a bit of a fantasy world. Like many people, it’s not till you move away from the place you grew up that you realise how strange it is. I was in my 30s when I left and thinking about how peculiar it had felt, living on the edge of a big council estate with the countryside at the end of the garden, was one of the reasons I took up researching and writing about Britain’s built environment. None of it made any sense!

Croydonist: Probably a bit of an open-ended question but do you think concrete and nature can live happily side by side?

John: Concrete and nature coexist happily all over the world. Whether it’s sea defences built to shore up fast-eroding coastline, zoo enclosures helping to protect endangered species, or housing projects like the Barbican filled with trees, people have used concrete imaginatively to create landscapes and buildings that sit in and alongside nature in surprising ways. In many ways our cities can be more biodiverse than the farmed countryside, because of the lack of pesticides and opportunities for plants and creatures to take advantage of our gardens, parks, railways embankments and neglected spaces.

Croydonist: Do you think New Addington has changed since you lived there?

John: I lived in New Addington from 1970 to the early 2000s, and it has definitely changed since then. Some things, like the trams, have been brilliant, and have made the estate feel less cut off from the rest of Croydon. The Pathfinders group has been a major help to lots of the residents, I know my brother has used it. Culturally it’s a bit more mixed now, too. There are things I miss, like the old library, and some of the long-standing shops, like Woolworths or the bakers. But generally the fabric of the place is remarkably similar to how it was back in the early noughties. A few new buildings, but for the most part, a bit of a time capsule, though definitely in need of looking after.

Croydonist: Loving a bit of twentieth century concrete architecture ourselves, we managed to get our hands on an advance copy of ‘How To Love Brutalism’ at RISE Gallery. I’m very much enjoying it so far, as well as appreciating the design. How did the pairing come about with the illustrator?

John: So, Carol, or The Brutal Artist as she is known, is a fantastic illustrator of modern buildings. I’d seen her drawings on Twitter and Instagram and loved them, and we’d become mates online. When I was asked to write this book the publishers were keen to have an illustrator involved, and I immediately suggested The Brutal Artist, because she has a great way of presenting these buildings in a warm, friendly and idiosyncratic way that suits the style I hope I write in.

Croydonist: I see from your website that the book is actually part of an architectural series published by Batsford going back to the 1930s. How did the idea for the book come about and what does it mean to you to be part of such a long-running series?

John: It’s amazing to be part of a series like this, a real bit of design heritage. When the series first started there were no brutalist buildings, so it’s funny to be writing a history book about a style of design that is younger than the book series… Batsford were keen to continue to publish new books in the series, and so given the interest in brutalism and modern architecture they were after a book to capture the good and bad of the style. I hope it’s a good introduction for anyone who was interested but didn’t know where to start. 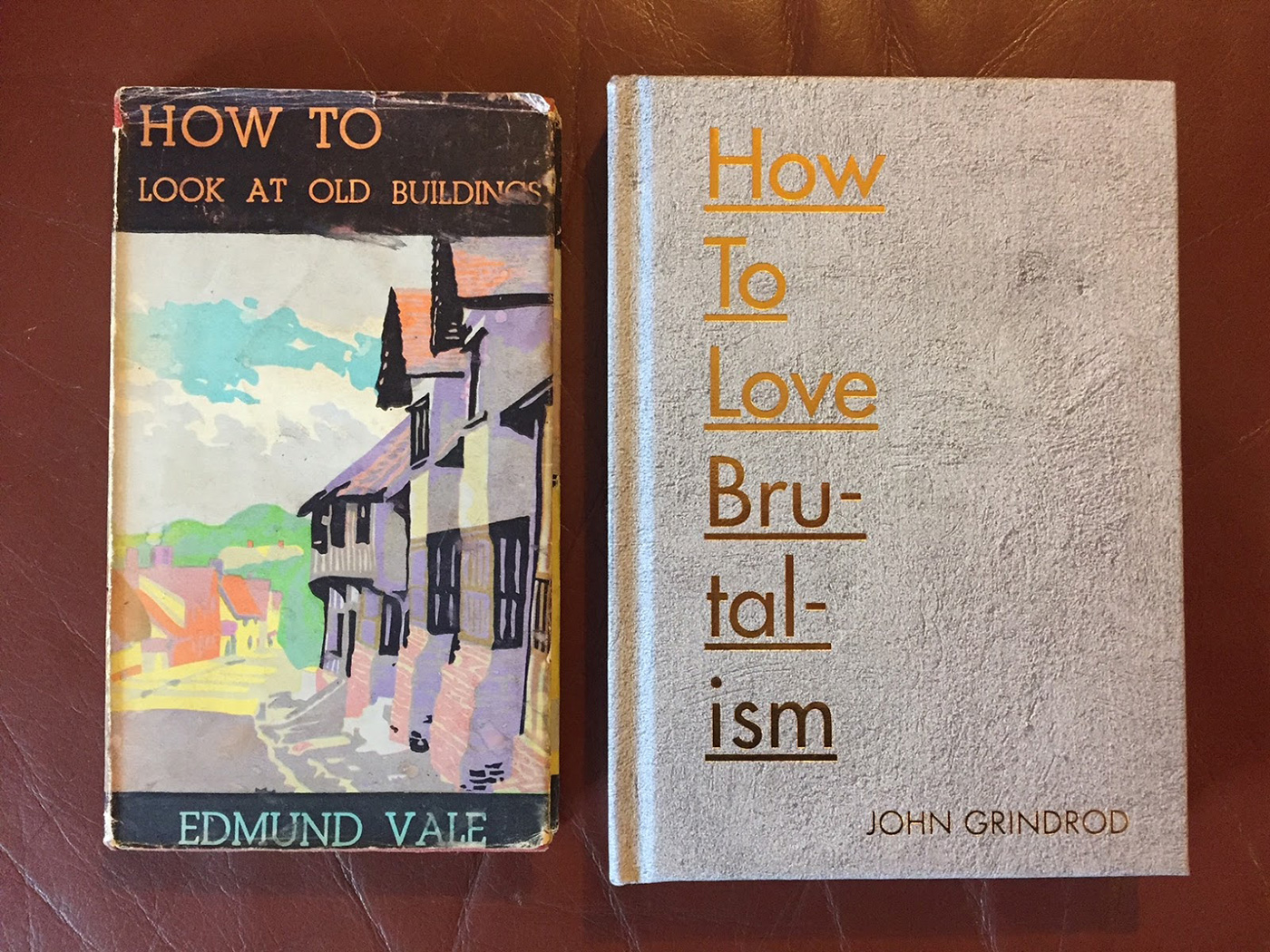 Croydonist: When did you start to love brutalism?

John: I loved modernism, concrete architecture and brutalism from the moment I started to visit Croydon town centre in the 1970s. Lots of those buildings, including the Whitgift Centre, have been altered and clad since then, but back in the day it was pure Thunderbirds!

Croydonist: Is there a truly brutalist building in Croydon?

John: Surprisingly, although there are lots of modernist buildings in Croydon, few of them are truly brutalist. You could make a claim for the Threepenny Bit, though it’s covered in tiles. Ryland House, the old telephone exchange, is a rough concrete brutalist classic. General Accident House at East Croydon (now an EasyHotel) is sculptural and rough concrete enough to be brutalist. Leon House too has a great deal of brutalist swagger to it, especially with its William Mitchell concrete sculpture. Croydon Art College, next to the Fairfield Halls, is due to be demolished. It’s a fantastic, historic brutalist building, both magnificent in design and important in national culture. Its loss will be an act of vandalism.

Croydonist: If you could live in any style of architecture what would it be and why?

John: I love modernist architecture in all its forms so it’s a tough choice. I guess I’m a sucker for that 50s Festival of Britain style, Scandinavian influenced, big windows, very mid century modern.

Croydonist: Classic interview question – dream dinner party time – if you had to invite three architects to dinner (dead or alive) who would they be and why?

John: Blimey. Architects can be a bit of a handful. Three at once would probably do me in. So why not go all the way, and have Erno Goldfinger, who was a genius but legendarily bad tempered (he once fired someone who didn’t even work for him); Alison Smithson, that pioneering brutalist, who would turn up in a crazy futuristic outfit she’d have made herself; and John Poulson, the corrupt architect who bribed his way to the top. He’d have a few stories… Mind you, I think they’d trash the place. And each-other.

Croydonist: What’s next for you after the launch of ‘How To Love Brutalism’?

John: I do have a talk coming up at Foyles on Charing Cross Road, and I’m hoping to do something with the new Croydon Modernist Society – more on them here.

Croydonist: Favourite spot for a coffee/glass of wine?
John:  I love Matthew’s Yard. Brilliant place. Hope it stays. And The Ship was always my pub of choice.

Croydonist: Favourite cinema to get lost in a movie?
John: The Clocktower was always my favourite, saw so many great films there.

Croydonist: Favourite place for an evening’s entertainment?
John: I cannot wait for the Fairfield Halls to re-open.

Croydonist: Favourite greenspace for a wander?
John: I took a National Trust film crew round Addington Hills recently. Not been there for ages, and the view was amazing. And not just of the doggers.

Croydonist: Favourite spot to daydream?
John: Croydon is full of great daydreaming spots, but since so many of the great modernist buildings are either under threat or have gone, St George’s Walk remains as a place full of ghosts of cafés, clothes shops, galleries and clubs that have long since disappeared. It does make me wish that Croydon Council valued its postwar heritage a bit more. Just as towns and cities all over the UK are rediscovering their 50s, 60s and 70s gems, Croydon is knocking them down and letting them fall to ruin. So I’d be daydreaming that Croydon could snap out of this endless state of self-harm and learn to love itself and its history a bit more. 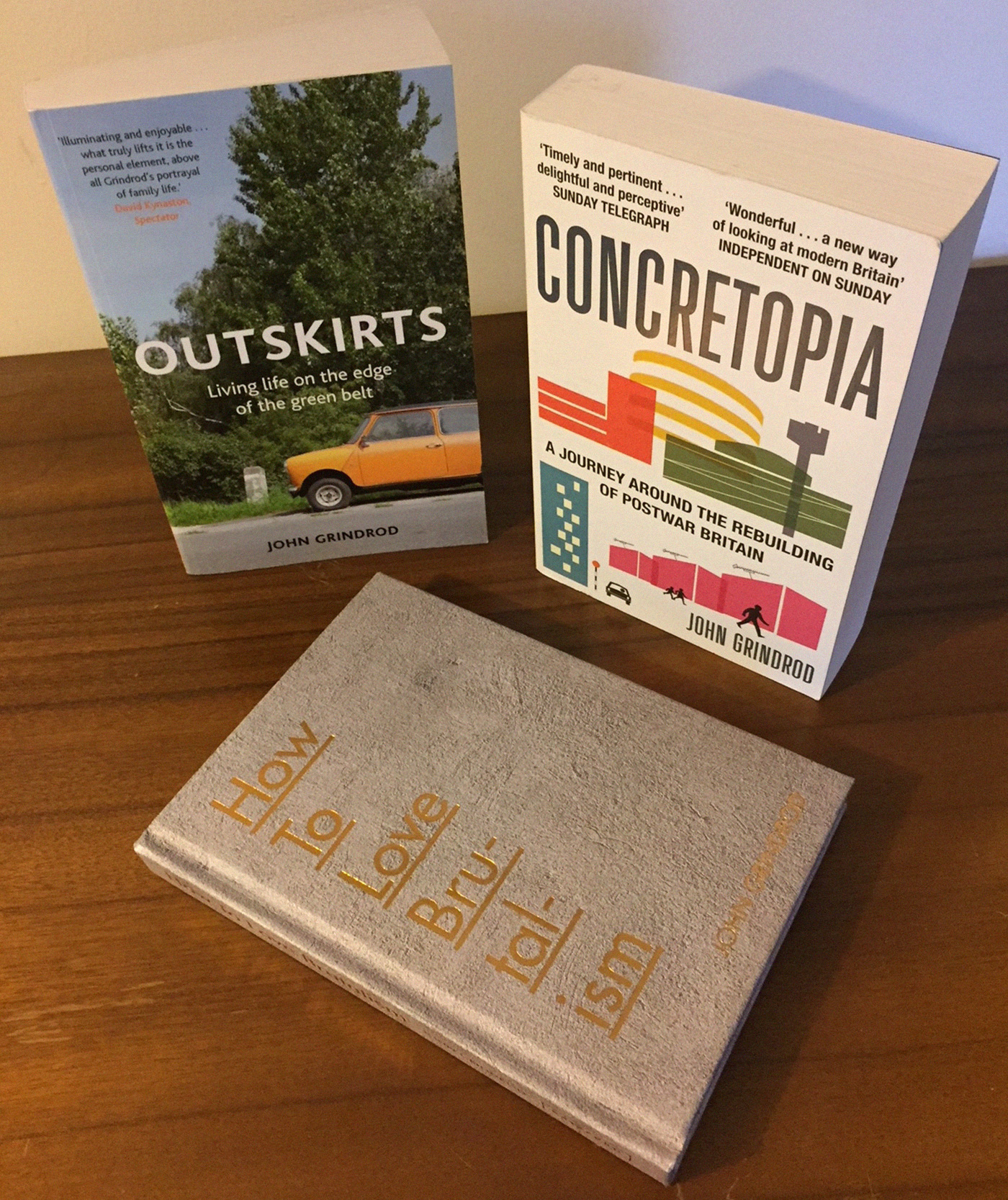 A huge thanks to John for chatting to the Croydonist. You can find out more about what’s he’s up to here. And you can buy ‘How To Love Brutalism’ in all good book stores, or online here.

If you don’t have a copy of John’s ‘Concretopia’ or ‘Outskirts’ on your bookshelf yet get them here and here.