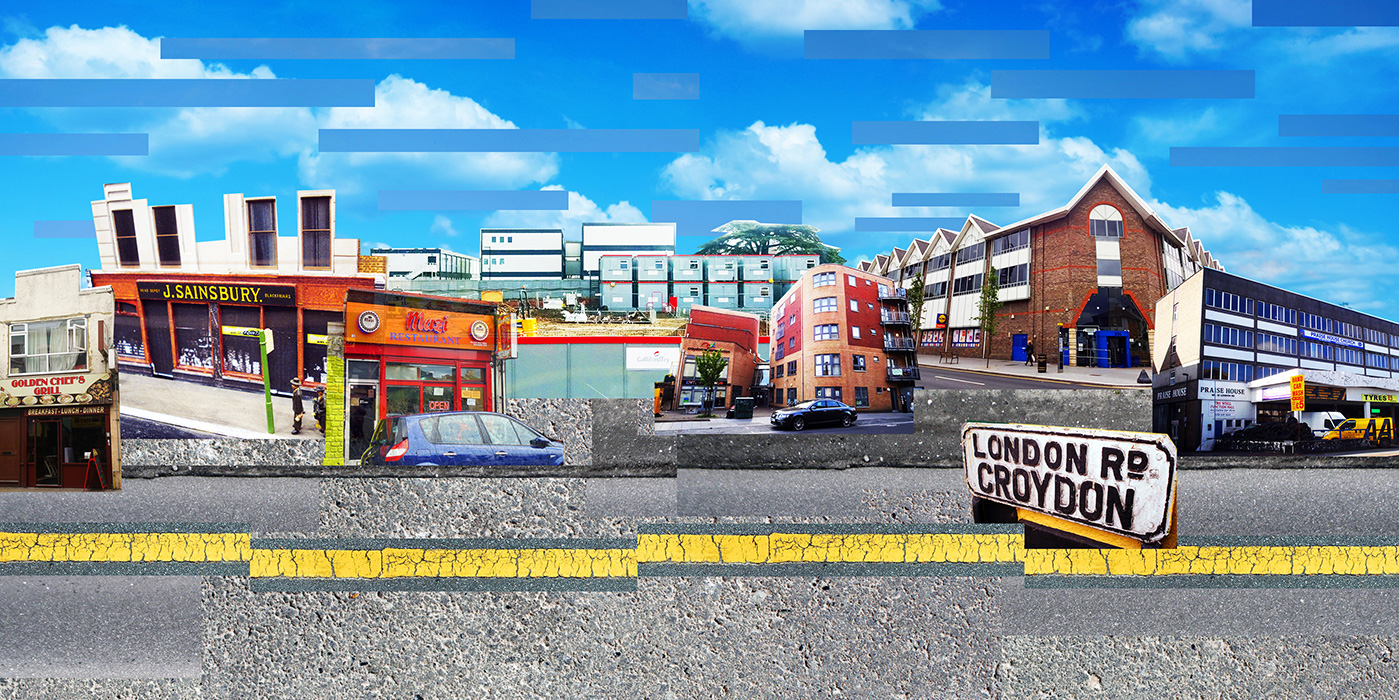 The other week I met up with Croydon resident, Kake, for a cuppa at the Golden Chef café, number 18 London Road. You may wonder why I’m telling you the exact address of the café. We thought it a fitting place to meet because Kake is documenting the history of each address on London Road in the popular blog, which started back in November 2012. With over 1500 addresses to research it may take 30 years to complete. But as Kake says, this is entirely plausible because ‘I love living in Croydon and intend to stay here for the rest of my life’. 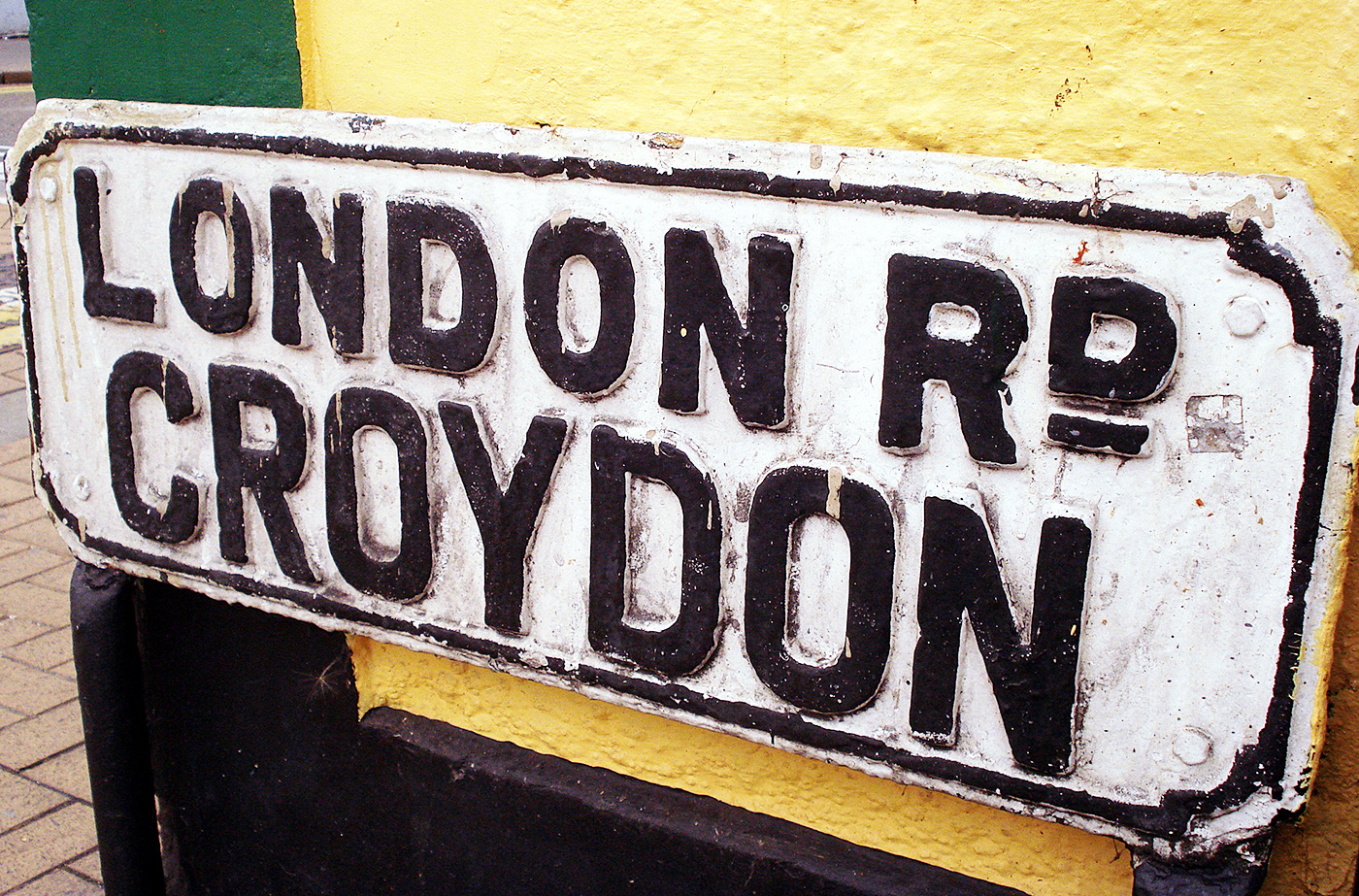 We chatted about the top five addresses Kake’s blogged about so far. Here they are in chronological order…

This address, opposite West Croydon Station, has yo-yo-ed back and forth as a Sainsbury’s since Victorian times. John Sainsbury bought the properties in this strip back in the 1880s, and fitted out number 11 as a new style of grocery shop. Who knew the turning point in Sainsbury’s history happened in West Croydon? It sounded a much fancier store back then than it is now – with wrought iron arches, stained glass, and marble pillars and counters – the first Sainsbury’s to be aimed at a wealthier class of customer, and a template for others to be rolled out across London. 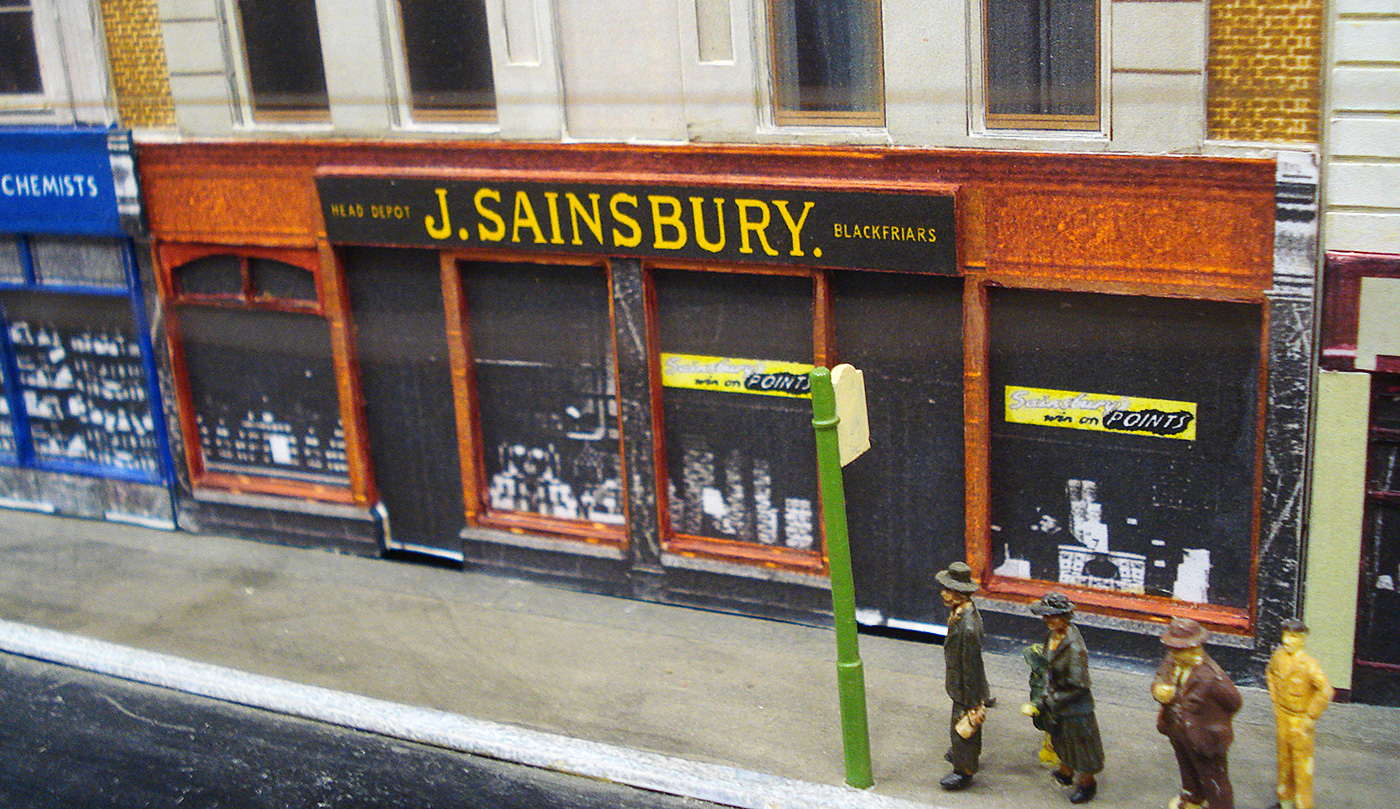 Fast forward sixty or so years, and John’s grandson Alan was in charge. He became fascinated by the idea of self-service retail after a trip to the States (you didn’t have to take items off supermarket shelves yourself before this time). So upon his return, they changed the West Croydon branch into their first self-service store, opening in 1950. The press of the time described quite unknown objects to the british housewife, such as ‘wire baskets’ and ‘two-tire wire trolleys’ in which you placed your groceries after selecting them from the shelves. I wonder what they would have made of today’s self-service check-outs? Bag your item please!

Mazi is a Turkish restaurant, and one of Kake’s favourites in Croydon. Before taking on its current purpose, this property has been through just about every guise you can think of since the 1890s. It started out as a fruit store, then became a hardware merchant, a shoe shop, a china and glass warehouse, a tailors, a radio rental store, a hairdressers, a sauna (not sure which variety), an employment agency, a car parts shop, then a travel agent. Phew. 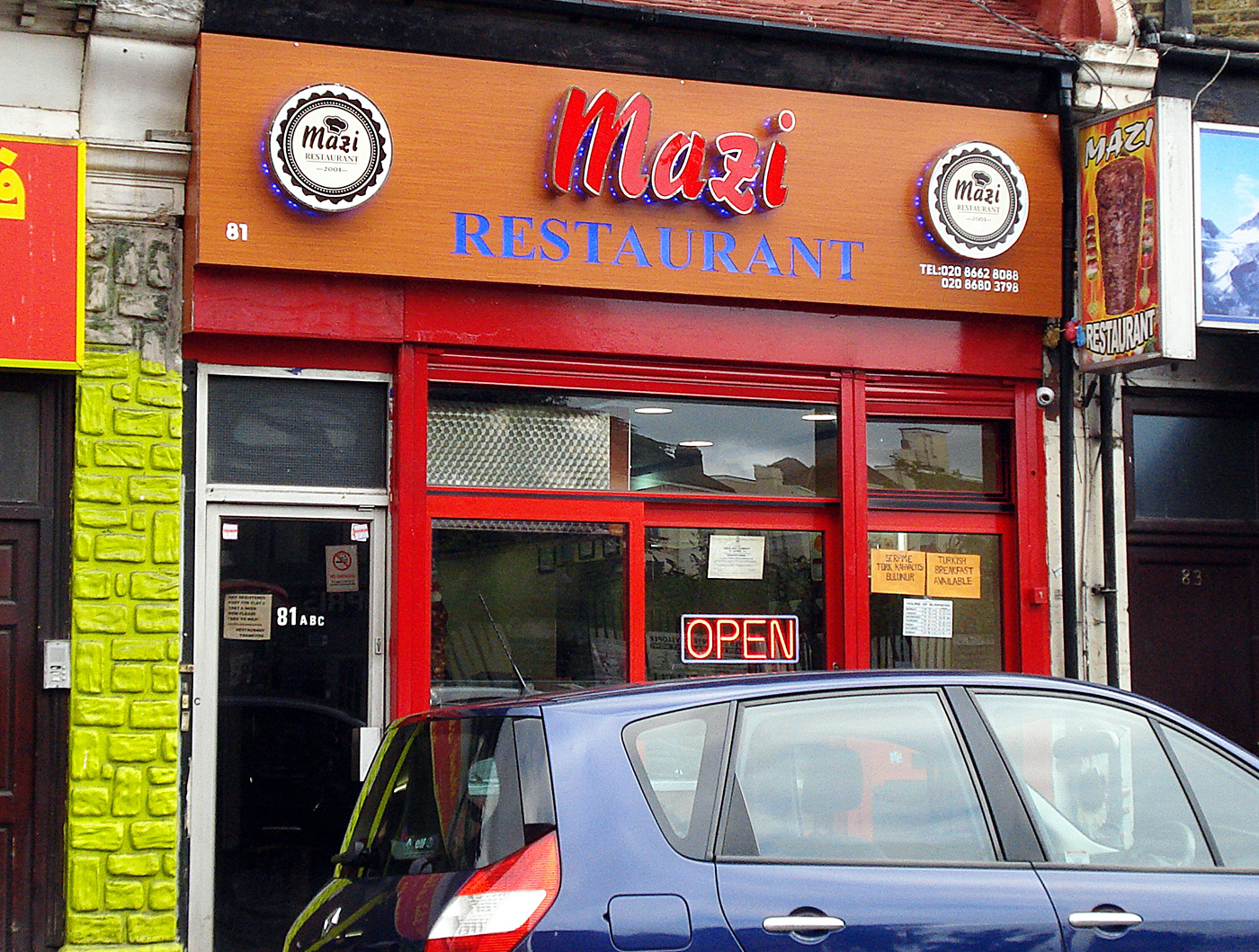 The most intriguing amongst that list for me is Charles Baber’s 1920’s shoe shop. Back in the days when ready-made shoes were seen as a bit sub-standard, Charles stocked a staggering 324 different sizes and fittings in at least 300 different styles, in order to please his customers – that’s what I call choice. Asos, eat your heart out.

This area was home to a big estate (in the posh sense) dating back to the 1500s called Oakfield. Various occupants lived in the grand lodge until the mid 1800s when parts of the grounds gradually started being sold off to developers. The last owner of Oakfield Lodge, Joseph Rickett, was persuaded to sell the property, and the building became Croydon General Hospital in the 1870s (Mayday up the road, came along a bit later). Now this was way before the advent of the NHS so there were various events held to raise funds for the hospital. Kake has found a great ad from the mid 40s promoting a hospital carnival in Wandle Park. 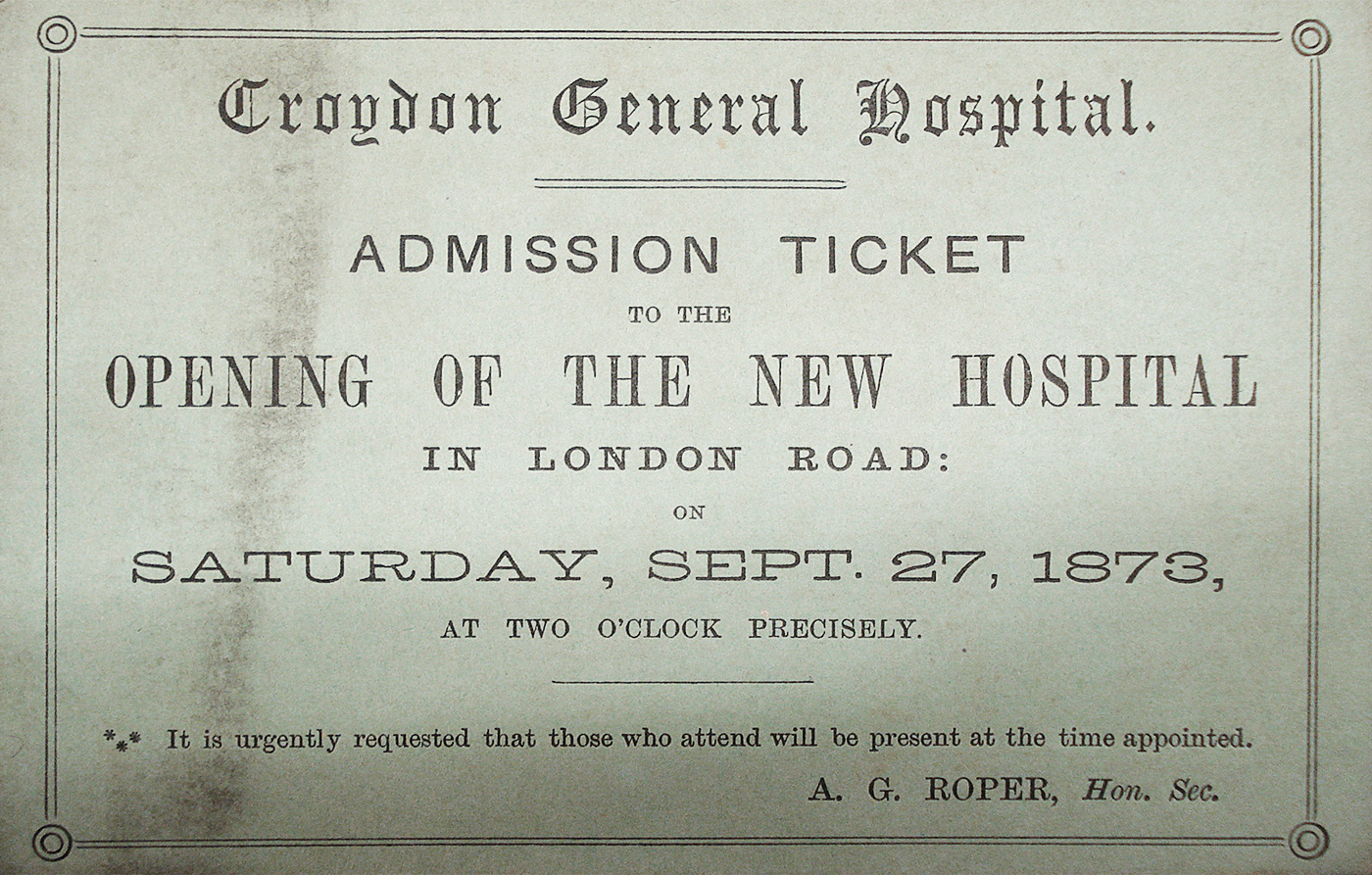 The Croydon General became part of the NHS in 1948 and the building hobbled along as part of the hospital in one form or another until the mid 90s, when it became no longer viable to modernise. It then stood empty and decaying until its demolition in 2004. A voluntary centre opened on part of the site and was joined by a secondary school housed in porter cabins in the grounds by 2014. The spangly new building to properly house the secondary school, Harris Invictus Academy is due to open its doors this September.

In the mid 1800s a row of houses were built on this site. There were various residents over the years, but the most notable would have been Samuel Lee Rymer who lived there in the 1870s. He was a dentist, who later went on to become a magistrate, one of the founders of the Croydon Guardian newspaper, and by the 1890s the Mayor of Croydon. That’s career progression for you. I guess you didn’t need to keep the law and the press separate in those times.

By the early 1900s the Co-operative Society had taken over a couple of the houses to convert into their new headquarters, and slowly expanded along the row over the following years. By the 50s it sounds like the Co-op was West Croydon’s very own Selfridges, as you could buy virtually anything there, from clothing and haberdashery to groceries and furniture. You could even get your eyes tested and teeth cleaned upstairs and visit Santa in his grotto at Christmas time. Unfortunately it started to struggle by the 80s (I guess everyone was shopping in the Whitgift Centre by then) and the old building was closed.

The administration decided to knock it down and built a more modern supermarket store, with a 500 space carpark, so the Co-op was reincarnated in the early 90s. They hung onto it until ‘99 when Lidl swept in from Germany to take over. It was badly damaged in the 2011 riots, and had to operate from temporary accommodation in the carpark for a while, but they refurbished and soldiered on and are still going strong today.

Praise House is currently a dual purpose building – with a Christian church upstairs, and a car business downstairs. A slightly random pairing, but this diversity is what makes London Road.

The site however started out as four houses. My favourite story of one of the occupants was Walter Wood, the widower of Victorian inventor Annie Wood. Annie came up with a great many inventions, but the most quirky has got to be the mechanical horse. This was basically a motorised vehicle in the shape of a horse. It was used to pull a carriage or cart, and thus designed so real horses wouldn’t be scared of it. There was a concern at the time you see, that horses would rear up at the site of the new motor-car. So what a brilliant solution. I wish we still travelled by mechanical horse! Walter lived with Annie up the road in Mitcham Common in a house she had designed for them. After she died in 1897 he married again and by 1903 was living with his new wife on London Road. 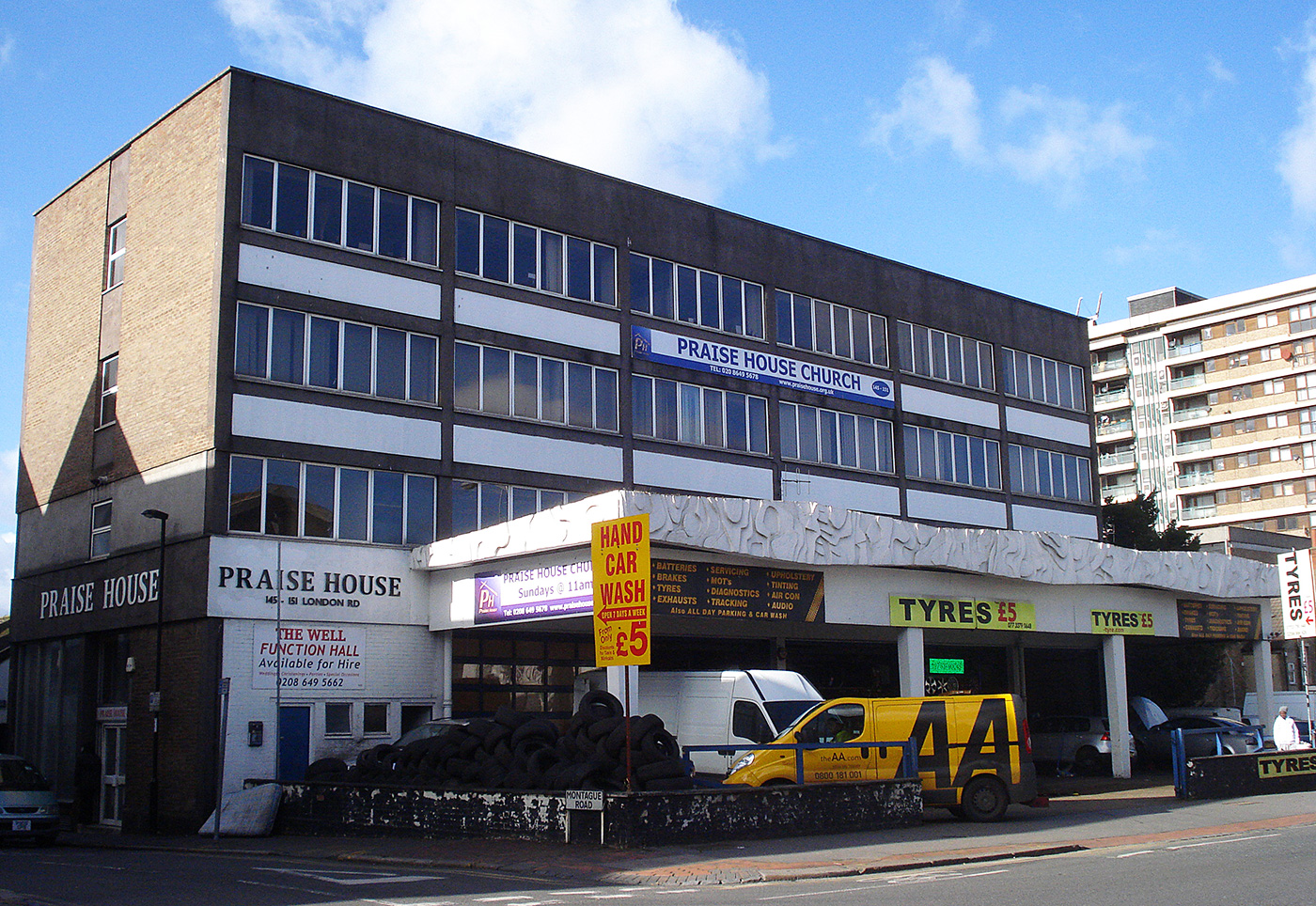 By the late 60s the houses had been demolished to make way for the building that’s there today. Various car businesses have occupied the ground floor garage space over the years. It sounds like the upstairs and basement areas have had various tenants, but in 2010 a church moved down from Brixton, and they have been renovating and expanding their facilities since then. Let’s hope they retain these rather crazy decorative mouldings in the entrance hall. 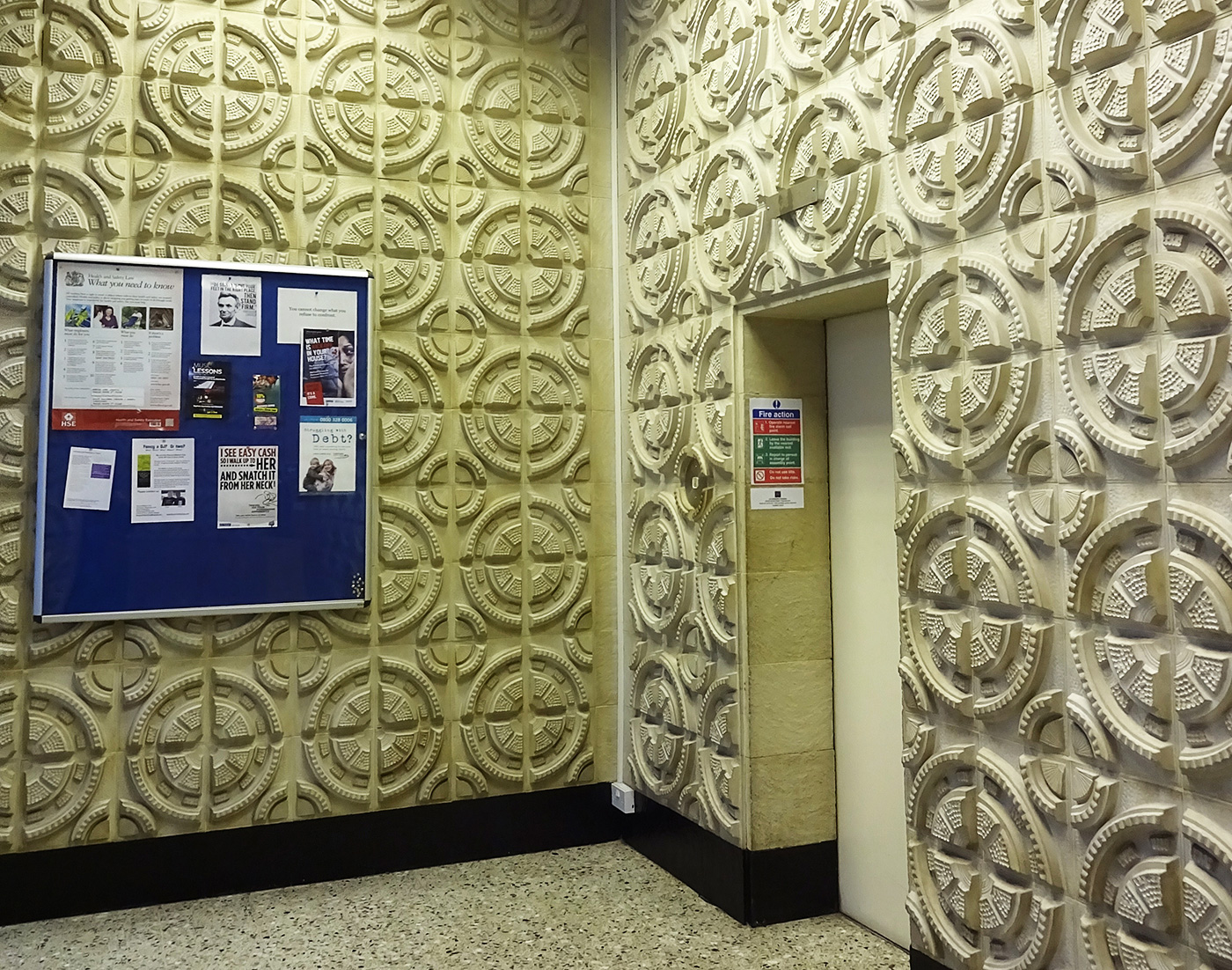 So there you have it, a whistlestop tour of some of London Road’s history, through Kake’s top five so far. We finished our chat in the Golden Chef with some more general Croydon questions…

Croydonist: An evening drink at Dog & Bull, The Spread Eagle, Royal Standard or Matthews Yard?
Kake: I’m most likely to end up at the Royal Standard, which was one of my favourite pubs even before I moved to Croydon. I love their good selection of Fuller’s ales and collection of traditional board games.

Croydonist: A walk in Wandle Park, Lloyd Park, Addington Hills or Park Hill?
Kake: Wandle Park’s the obvious one because it’s basically at the end of my road. The recent project to de-culvert the River Wandle and landscape the grounds has made such a difference, and I always enjoy seeing trams go past when I’m out for a walk. There’s also plenty for children to do – I’ve been taking my nephew there since he was a baby, and he can’t wait until he’s big enough to go on the rope climbs.

Croydonist: Take in some art at Click Clock, RISE, Turf, or Descart.es?
Kake: Click Clock is probably the one I spend most time at, because if I’m visiting the Museum of Croydon’s local archives I’ll usually have lunch in the café. I’m a big fan of Turf too, though; Alice, the owner, was one of the first people I met when I moved to Croydon. Turf runs regular events for children, and my nephew loves going to them and learning new ways to make art.

Croydonist: Travel by tram, train, bus, or by foot?
Kake: Walking is the right speed for me, since it lets me notice things in time to stop and take a photo. The top deck of a bus is useful though, as a lot of the interesting historical details are higher up.

Thanks to Kake for chatting to us about the London Road project.

All article photos by Kake, header image collage by the Croydonist using Kake’s images and textures.com

I love Kake’s articles. Having grown up in Croydon, I enjoy being reminded of the former shops and businesses along London Road and. The research and attention to detail is amazing. One of my fave blogs.

Aw, thanks Tim, what a lovely thing to say! Do drop me a line (kake@earth.li) if you’d like to share any of your London Road memories. I’m always keen to talk to people who might remember any of these shops as they were in the past.

What a fab write up! It’s great to see Kake’s meticulous labour of love get recognition. A fantastic and truly community focused project!

I was born in January 1941 in St Mary’s Maternity Hospital St James Rd, we lived to 1949 opposite St James Court St James Rd moving to New Addington. I joined the cubs attached to the Methodist church next to the Co-op store London Road. To the left of the church was a antique shop was owned by a Mrs Hatfield who lived in Sanderstead, she befriended my mother & invited the family to Sunday tea a few times. Wandle park was our play area messing around with the rowing boats & sliding on the coal heaps. We use to climb the wall overlooking Cuthberts Abattoir where the animals were kept for slaughter. A group of friends use to go to Thornton Heath Pond messing about in the water always wore Wellington boots because of the broken bottles in the pond, on hot days we use to go tram to Streatham Common & paddle in the upper & lower pools. Those were the days.

Thanks Edward, this is really interesting! I didn’t know about this antique shop before, and I can’t find it in phone books or directories — shops in the 1940s are quite tricky to research because Ward’s Croydon directories stopped publishing after 1939 and it was too early for most shops to have a phone. I’ve emailed the Museum of Croydon to ask if they have anything in their files.