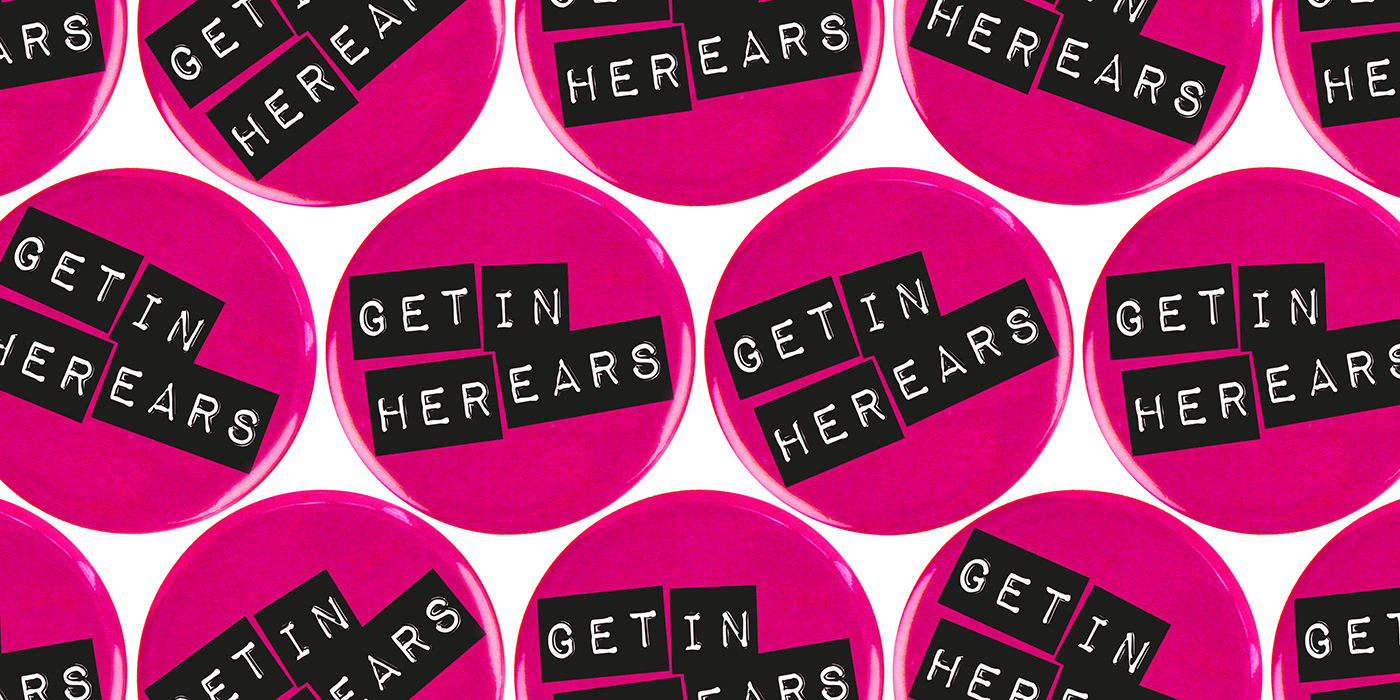 What do you get if you cross a DJ, a promoter and a music journalist? Mari Lane from Get In Her Ears of course! If you haven’t yet heard of Get In Her Ears, now’s the time to listen up (see what I did there) and, well, read on dear readers as we get the full lowdown from Mari herself.

Croydonist: First off Croydon native or convert and which area of the borough do you call home?

Mari: I have to say, I’m a Croydon convert. I moved here from Tooting last summer, and I’m loving it! I’m never quite sure what to call the area I live, I guess it would be North Croydon – not quite Thornton Heath, but not quite West Croydon… Either way, it’s a fab place to live.

Croydonist: You co-founded the music organisation Get In Her Ears. For our readers who haven’t come across you guys yet. How would you describe what you do?

Mari: Get In Her Ears is a website, radio show and live music night dedicated to supporting and promoting women and non binary people in music. We wanted to start Get In Her Ears as, though some of our favourite bands may be cis white men in rock, we just felt there’s so much more to music than just those guys, and – with the industry’s ongoing ingrained sexism and underrepresentation of women/non-binary artists – we didn’t feel the world needed another organisation dedicated to promoting these kinds of bands. Our general aim is to promote new music from all genders and genres, with a focus on supporting women in the industry.

We’ve been hosting monthly gigs at The Finsbury for two and a half years now, and last summer started hosting occasional nights at Notting Hill Arts Club.

On our website you’ll find all sorts of new music reviews and features including Tracks Of The Day, EP and album reviews, interviews and premieres, and you can hear some of our favourite new tracks on our radio show every Thursday night on Hoxton Radio.

Croydonist: You created Get In Her Ears with Tash Walker and Kate Crudgington. How did it happen?

Mari: Get In Her Ears initially started just as a radio show over four years ago with me and Tash Walker, when I was editor at the music blog Gigslutz. We then joined forces with Kate who was writing at Gigslutz. I started organising gigs in October 2016, and then we all put together the website in October 2017. We started the platform as we wanted to dedicate a specific space for promoting women and non binary people in new music; we wanted to be free to do this on our own terms and on a platform we felt reflected our beliefs.

Croydonist: You run a weekly show on Hoxton Radio – how do you get into the zone each week?

Mari: I must admit, I’m getting a bit slack with the radio show in my old age, getting to East London after a full day’s work can be quite tiring for me, being Croydon based (and working in Epsom)! But, luckily, trusty Tash and Kate generally have it under control. They’re pros.

On the weeks I am on air, it’s generally a great antidote to the day’s worries – just being able to play awesome tunes and talk about music that I’m passionate about. When we first started the show, I would get pretty nervous about talking on air… But these days, I’m more confident and don’t hate the sound of my own voice quite so much! We’re also are lucky enough to have some fantastic guests come in for chats and acoustic sessions on the show, so it’s normally pretty exciting.

Croydonist: What the most quirky interview you’ve ever done?

Mari: Hmm, I’m not sure about quirky… sure there’s been a few! One that sticks in my mind is when I had amazing feminist punk witches Dream Nails as guests on the radio show a few years back. It was my first time hosting the show solo, and I had no idea what I was doing technically. Luckily, being so incredible, they still managed to give a great interview – talking eloquently about their beliefs and ethos as a band, despite me pressing the wrong buttons numerous times and sweating like a pig with nerves! They even managed to fit in an exclusive acoustic version of one of their tracks.

Croydonist: What bands have you been listening to this month?

Witching Waves – they have a new album, Persistence, out on 5th April, and from what I’ve heard of it so far, it’s a perfectly infectious post-punk record.

Mammoth Penguins – I just love their dreamy indie-pop sounds. They have a new album, There’s No Fight We Both Can’t Win, out on 26th April, and they’re also playing for us at The Finsbury on 12th April. I can’t wait!

Our Girl – I saw them at The Southbank Centre earlier this month, and they completely blew me away with their lush, fuzzed-out sounds.

Chorusgirl – They’ve been firm favourites of mine for a few years now. Their latest album, Shimmer and Spin, is just pure indie-pop perfection (especially the track ‘Stuck’- gets me every time), and I can’t wait to see them again at Cro Cro Land!

Mari: Due to health issues, I haven’t been to as many gigs as usual over the last couple of months, but have managed a couple. As well as the lovely Our Girl at Southbank Centre, I also hosted a pretty fantastic gig at The Finsbury for International Women’s Day on 8th March (without meaning to blow my own trumpet!). ARXX headlined, and their seething punk-infused anthems and phenomenal stage presence just completely blow my mind every time – you’re in for a treat at Cro Cro Land! Also playing were The Baby Seals with their empowering punk-pop, South London duo Scrounge, who create a truly immense sound, and the twinkling Riot Grrrl-inspired soundscapes of Rainbow Corp. Our brilliant photographer Jon Mo was also there selling prints of some of our favourite bands to raise money for The Outside Project – an LGBTIQ+ community shelter. Altogether, a pretty wonderful night celebrating wonderful womxn!

Croydonist: If you could pick any three artists (dead or alive) to perform at a gig night who would they be?

Mari: Kathleen Hanna – She is my biggest hero. Riot Grrrl pioneer and founder of Bikini Kill, Le Tigre and The Julie Ruin, she never fails to inspire and motivate. I’ve seen The Julie Ruin live a couple of times live, and on both occasions I’ve just been so overcome with sheer joy, and I’m beyond words excited to see Bikini Kill reunited live this May at Brixton Academy!

Portishead (Beth Gibbons) – Portishead’s Dummy is probably my favourite album of all time; I have many memories of listening to it on cassette in the car with my dad, and I still find its immense beauty super cathartic. I’ve never seen Portishead live, and think they would be pretty breathtaking.

Aretha Franklin – How amazing would it have been to see the queen live?! She just embodied female power, and her incredible voice and empowering anthems would have made for an amazing live experience I’m sure. I still keep forgetting she’s gone, her music is so present.

Croydonist: What are you most looking forward to about Cro Cro Land?

Mari: Everything really! So many fantastic bands playing together in one space, and the fact that that space is in Croydon is pretty amazing. I’m looking forward to coming together with all the musicians, fans and musically-minded people who’ll be attending, and the welcoming sense of community that will no doubt be felt by all. It’s just so wonderful to be a part of an event championing gender balance in the music industry, and promoting local and upcoming bands; I’m quite sure it will pave the way for many more events of its kind happening in the local area, which is really exciting. Well done Angela and Julia!

Croydonist: After Cro Cro Land, what have you got coming up next?

Mari: The week after Cro Cro Land we have our next gig at The Finsbury on Friday 12th April, with Mammoth Penguins headlining, along with support from Duck, Death Of The Maiden and Winter Gardens. It will, as always, be free – so do come along! We’ll then be continuing with our monthly Finsbury dates throughout the year, on the second Friday of every month (with the exception of August, as I’ll be busy getting hitched). We also have our next gig at Notting Hill Arts Club on 22nd June – details tba.

Needless to say, we are huge fans of Get In Her Ears. If you’re ever stuck for your daily soundtrack, just listen back to their show on mixcloud. Superb taste in music both new and old, catch the team DJing at Cro Cro Land Festival. In the meantime, pop over to their site and have a nosy.

Images courtesy of Get In Her Ears