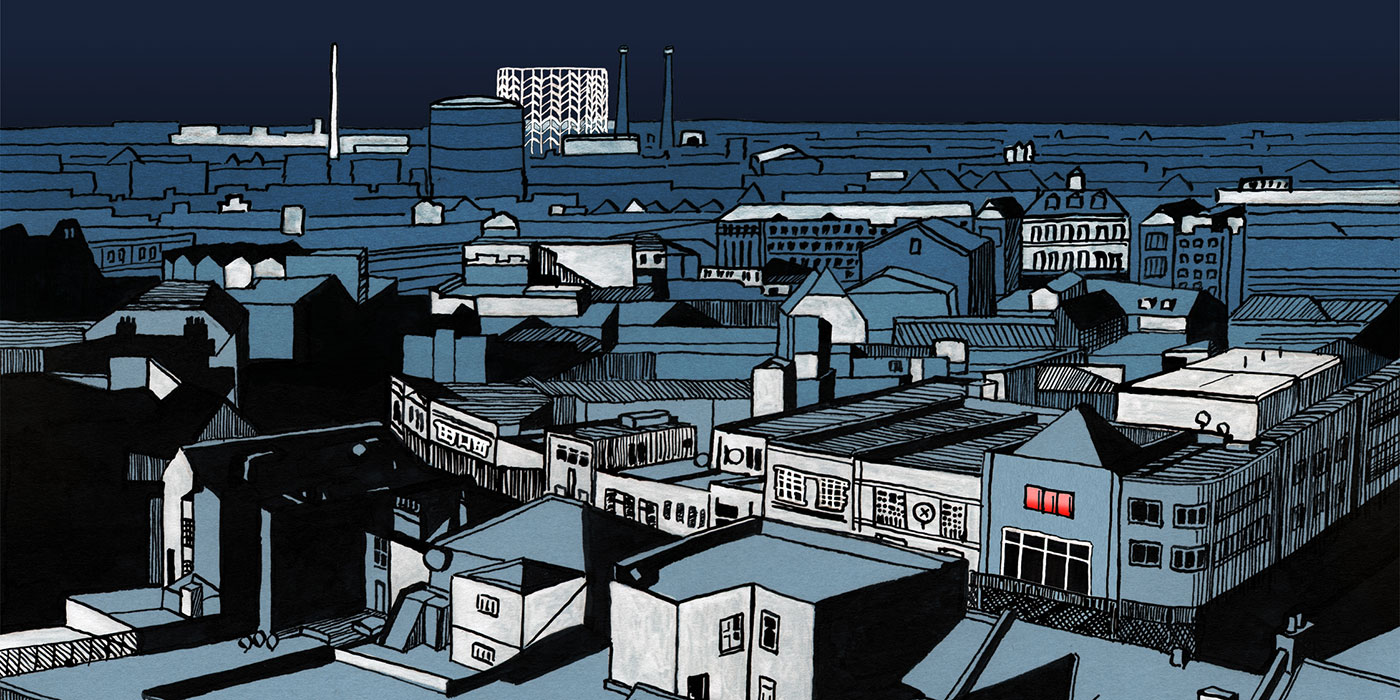 Matt Bannister is an illustrator who loves depicting the people and places of the Cronx. Living in nearby Wallington he’s regularly in our hood, searching for his next scene. We tracked Matt down to chat about people, pavements and… power cuts.

Croydonist: You’ve got a fair few pictures of Croydon in your portfolio. What inspires you to depict our lovely borough?

Matt: It’s the architecture, I think. Just like central London, Croydon has an eclectic mixture of styles and eras all rubbing alongside each other. From Victorian civic buildings, and 400 year old almshouses to 60’s concrete subways and 21st century towers, all in one place. If you add to that all the people, the grit and the sparks, it’s a great source of ideas for me.

Croydonist: If we had to pick a favourite image of yours it would have to be the Ikea view entitled Mystery Power Cut, that we showcased on our social media headers last year (detail shown at the top of this post). Is there a story behind this illustration?

Matt: Ha, well I probably should write one to go with the picture, shouldn’t I? There isn’t a tale as such. I just wanted to create one of those night time city scenes when you notice a solitary light on somewhere and you realise that you’re not the only one awake. To add a bit of interest, I thought I’d make it because of a power cut. The question is: why is that solitary room the only one that still seems to have electricity?

Croydonist: We can only imagine – perhaps it’s the home of a serial killer who has sabotaged the town’s electricity for some sinister ulterior motive (although maybe we’ve been watching too much Dexter – yes we know we’re late discovering this series).

Buildings or people – which do you prefer to draw?

Matt: I tend not to have one without the other, to be honest. I always want to add a little figure on a corner if I can. Alternatively, my drawings of people always work better for me if I can add some pavement or a skyline behind them.

Croydonist: The people in your scenes are always very characterful (Particularly your series of square Croydon street scenes). Do you get people to model for your pictures specifically?

Matt: No, but that would be amazing. I’m more shy and retiring about preparing my work. I tend to snap away quick photos on my phone when I’m out, almost at random. Later on, I’ll look through them and pick out characters that could work in a street scene I’ve already chosen. For the recent series that you’re referring to, I can assure you that every person featured is inspired by a real Croydonian out doing their shopping! 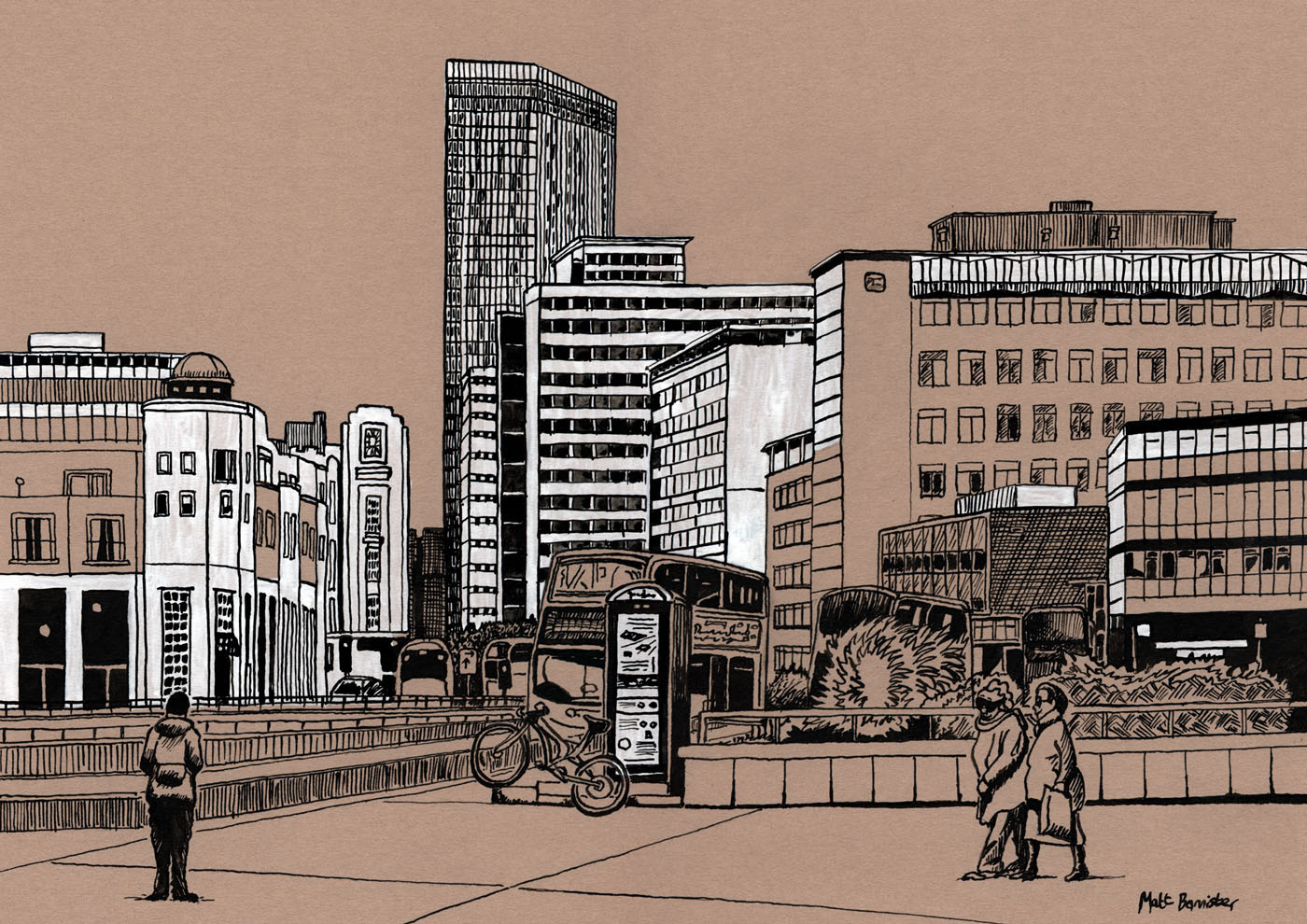 Croydonist: We love your ‘ink on board’ illustrations of Wellesley Road, the High Street and South End. How long does an illustration like that take, and do you do it in situ or back at your studio?

Matt: I find it hard to do stuff like that in situ. It’s a real skill drawing outside, and I’ve been less than happy with my efforts in the past. Usually this is because I think the best view is the one seen for two seconds from the middle of a pedestrian crossing. In other words, there’s nowhere safe to sit and sketch it from. I now grab my iPhone and take photos instead to work with later. The pics of South End, etc. were actually quite fast for me and took about a day to complete (once I’m back indoors).

Croydonist: What’s been your craziest commission?

Matt: I designed and painted two mini Routemaster buses, a couple of years ago, for the Croydon leg of the TFL Year of the Bus sculpture trail. There was one on display in Matthews Yard (inspired by Surrey Street Market) and one in Mint Walk (inspired by all the layers of Croydon architecture). I didn’t have much time to complete them, so artistically it was very satisfying, but physically it nearly killed me! It was also great to see them when they were put on show up at the Olympic Park, with all the other London bus sculptures.

Matt: I’d love to do some more rooftop views of the place; if anyone reading this is able to get me to the top of either Saffron Tower, Number One Croydon or the Nestlé Building please get in touch.

Croydonist: After a busy 2016 with three shows, including a solo exhibition at Addiscombe’s Café Adagio, what’s planned for 2017?

Matt: Well, given that I’m talking to you in January, the calendar has lots of room at the moment, but my notebook is always full of ideas. I’d love to build on what happened last year with more displays in different venues, if I can. I’m planning a series of pieces inspired by the riverside, bridges and beaches of the Thames and as I’ve just said, some brand new rooftop work of Croydon is something I’d love to pursue.

Croydonist: A drink in the Dog & Bull, Matthews Yard, Shelverdine Goathouse or Boxpark?
Matt: I know it’s still shiny and new, but I’m a big fan of The Cronx Bar at Boxpark.

Croydonist: A wander round a gallery – Turf, Descart.es, Click Clock Gallery or RISE?
Matt: RISE for me.

Croydonist: A film at David Lean, Purley Way, Grants, or Stanley Halls?
Matt: For art-house: it’s David Lean. A blockbuster during the daytime: Grants. I’d like to try Stanley Halls one day, though, as I’ve heard good things.

Croydonist: A walk in Lloyd Park, Wandle Park, South Norwood Country Park or Happy Valley?
Matt: The Happy Valley/Farthing Downs area is lovely and SO close to Croydon it’s a perfect antidote to the tarmac if you need it.

Croydonist: Shopping on Surrey Street, Purley Way, Whitgift or Crystal Palace Triangle?
Matt: Can I have all of them? Depending what you’re after, they are all great for something. Obviously Purley Way is only good if you can hide in a car.

Croydonist: Travel by train, tram, bus, bike or Uber?
Matt: I’m a fan of buses as they are great for spotting buildings and people from.

Thanks to Matt for chatting to the Croydonist. You can see more of his work here, and purchase some here.

All images courtesy of Matt Bannister.