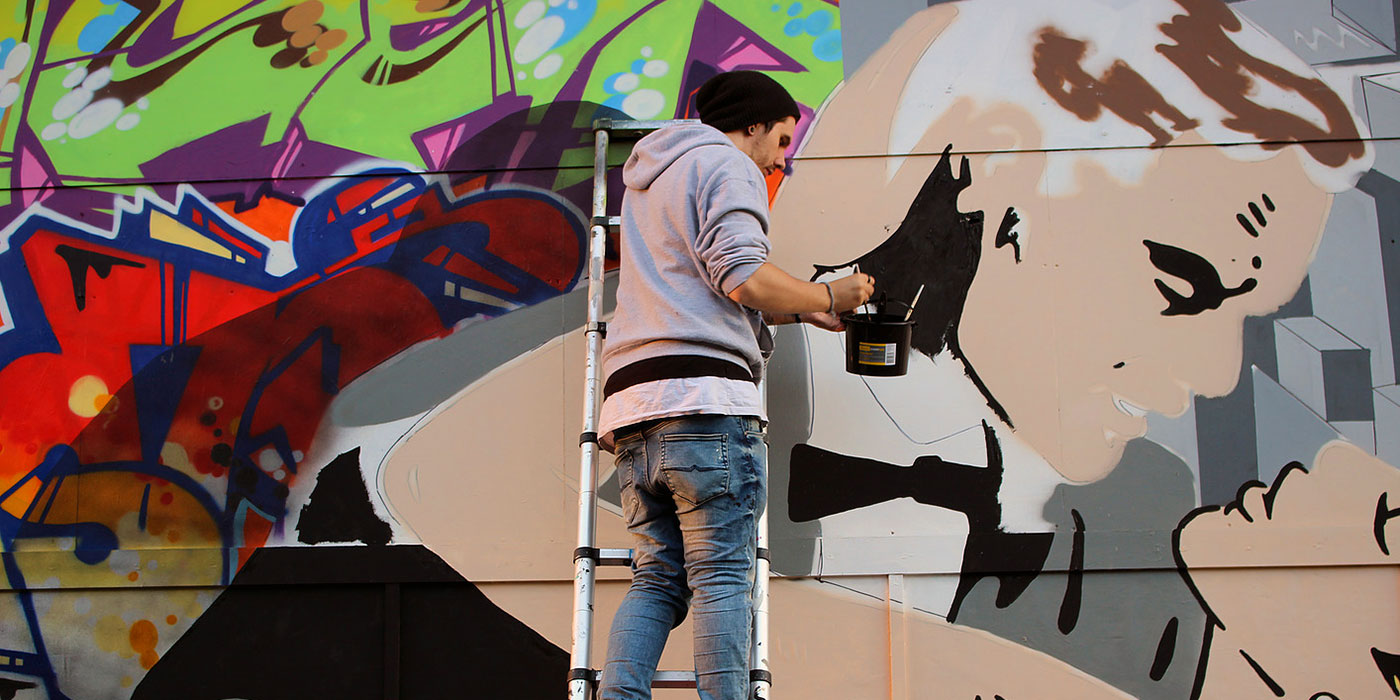 Croydon is big on art and even bigger on street art. Rich Simmons is an artist who is at the heart of our art scene – even if you don’t know his name I bet you’ve seen his art. From Princess Di on Exchange Square to his Warhol inspired work currently watching over the flyover, we wanted to find out more about Rich’s world of art. 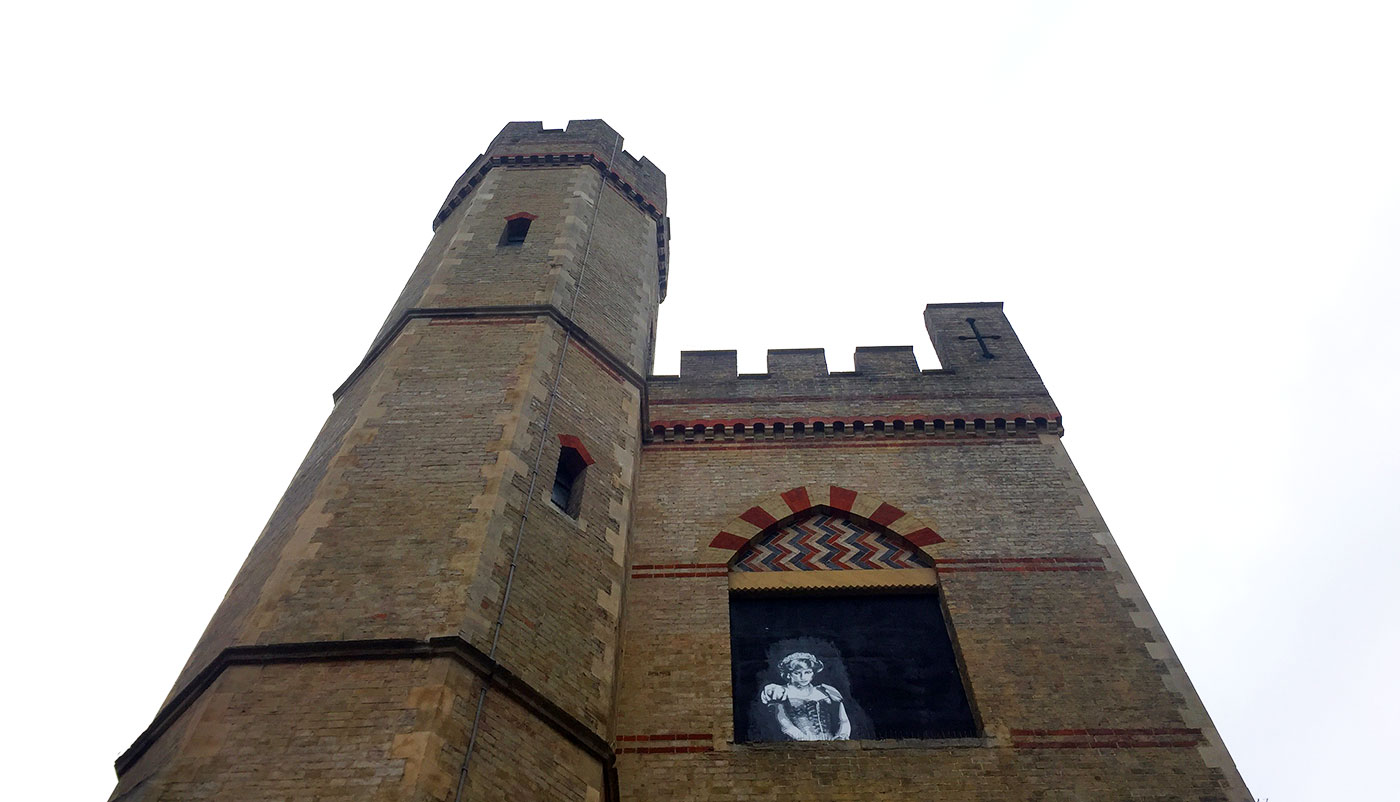 Croydonist: First of all, let’s get the big questions out of the way. Croydon native or convert? And how did you get to where you are today with your art?

Rich: I’m a convert – I moved to the Croydon area 7 years ago and it feels like home here now. I moved from Peterborough because I wanted to be closer to London to pursue my art career and found a warehouse space I could live and work from, and now I have my new studio in the heart of the arts quarter in central Croydon. 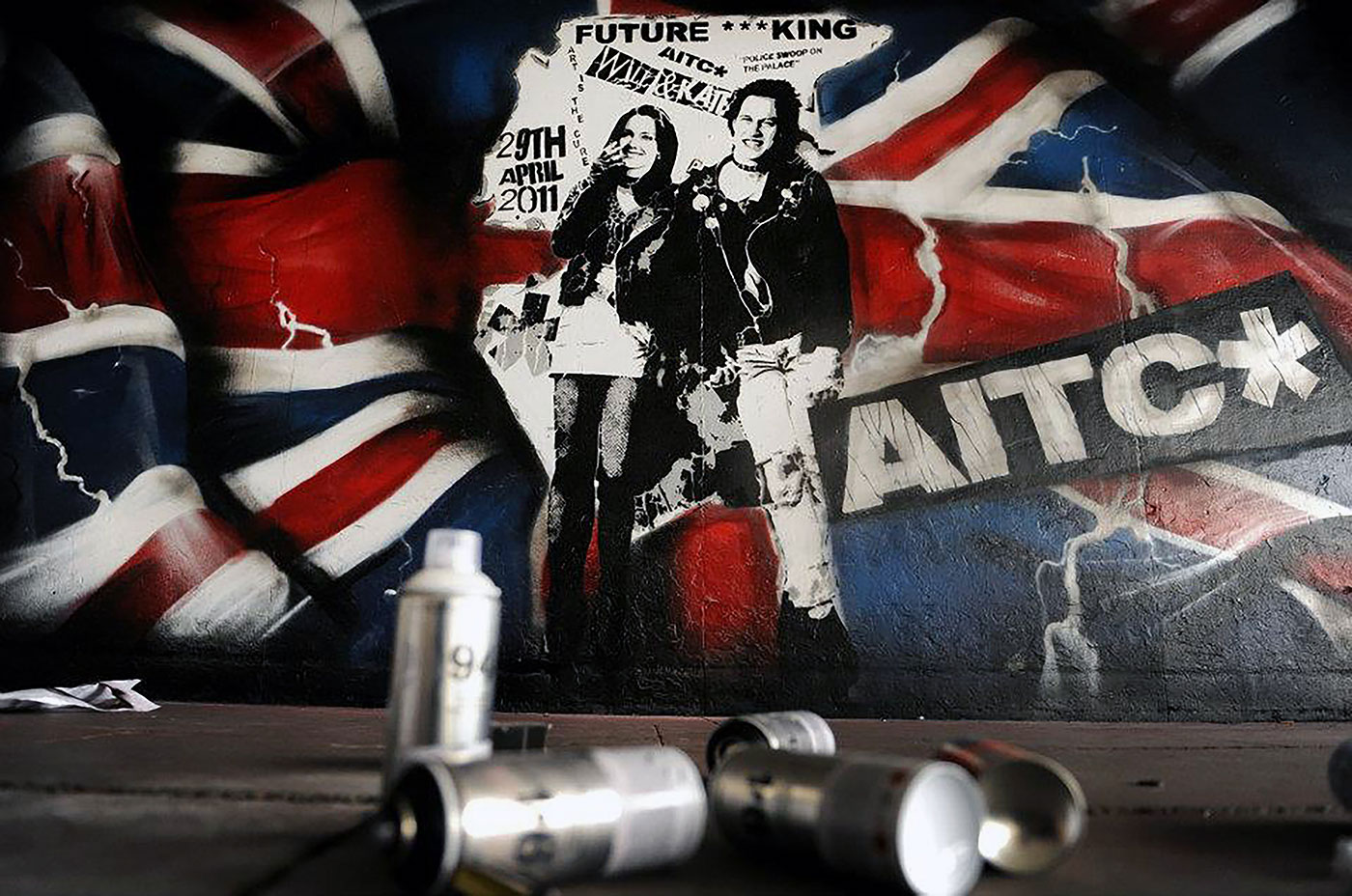 Croydonist: You rose to fame with your Will and Kate piece before the royal wedding back in 2011. Can you tell us more about this?

Rich: I was messing around on photoshop one day and thought it would be funny to see how Will and Kate looked as punk rockers, and that evolved into using the famous photo of Sid and Nancy with Will and Kate in it. I showed a few friends and they said I should paint it life size for a laugh, so I did it at Southbank skatepark and it blew up and got a lot of attention. Something I thought would be a bit of a joke for a few people to smile at turned into a career in art and the rest is history. 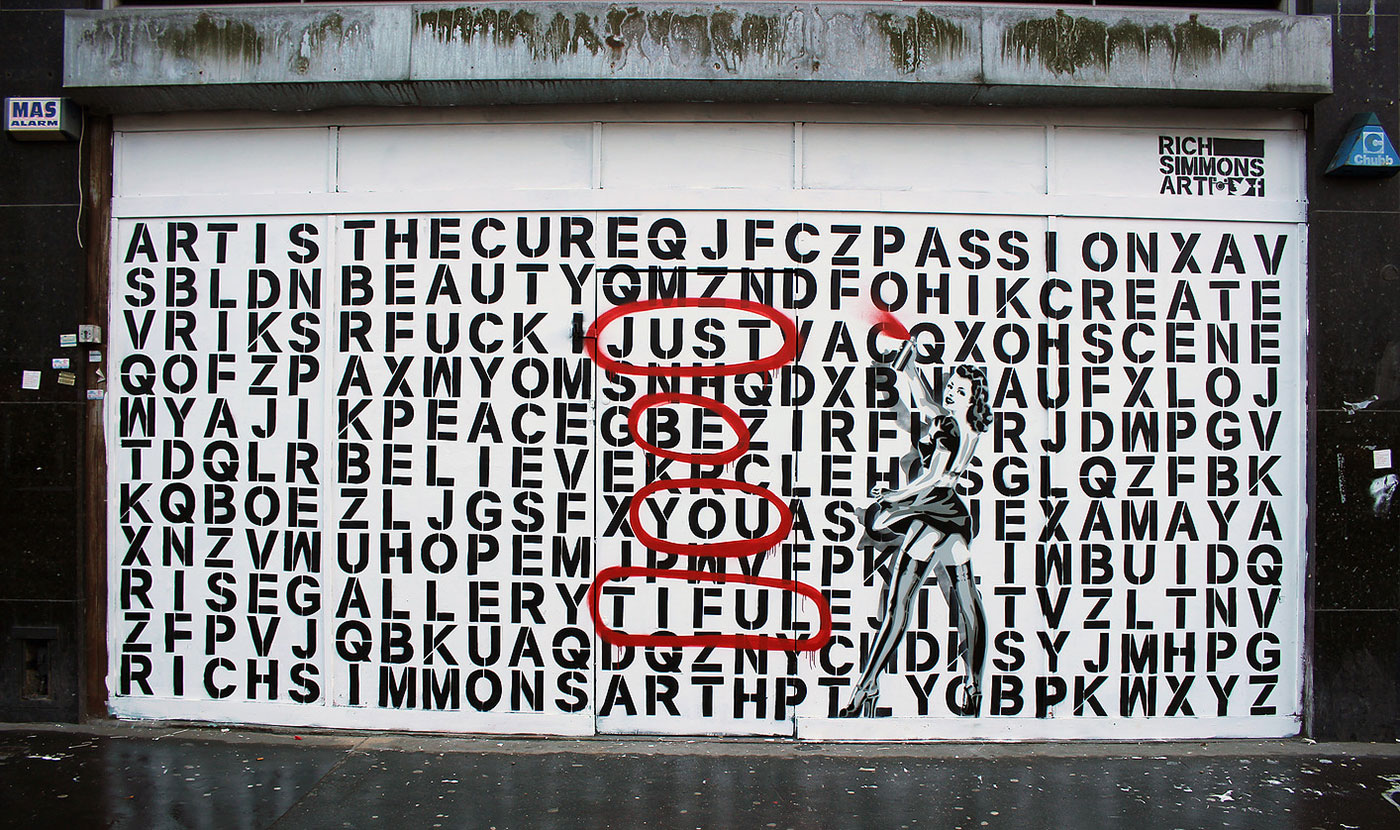 Croydonist: If we had to pick a favourite piece of yours it would probably be your wordsearch piece – although wait, there’s the men kissing that you painted on Surrey Street to celebrate Croydon Pride this year, which we also love. Do you have a favourite piece of work to date, and why?

Rich: My favourite is probably the reflections piece with the girl crying over superman kissing batman. It was a piece that combined both a narrative, a controversial issue (with superman kissing batman) and a cinematic composition and it just worked on a lot of levels. That piece also got me a lot of attention including Warner Bros, who loved it so much that I got to go to the Suicide Squad film and after party where I got to meet Batfleck and Henry Cavill. I did a huge version of it in Croydon on Park street too which was the biggest piece I’d ever attempted at that point so it has a lot of special memories attached to it.

Croydonist: Quite a lot of your work is topical. What would you say is your most controversial artwork?

Rich: Probably the superman kissing batman piece. I did it before gay marriage was legalised in the US and it struck a chord with a lot of people on a number of levels. I painted it in Croydon, New York and Los Angeles and it went viral and became a symbol of gay equality for a lot of people which was awesome. 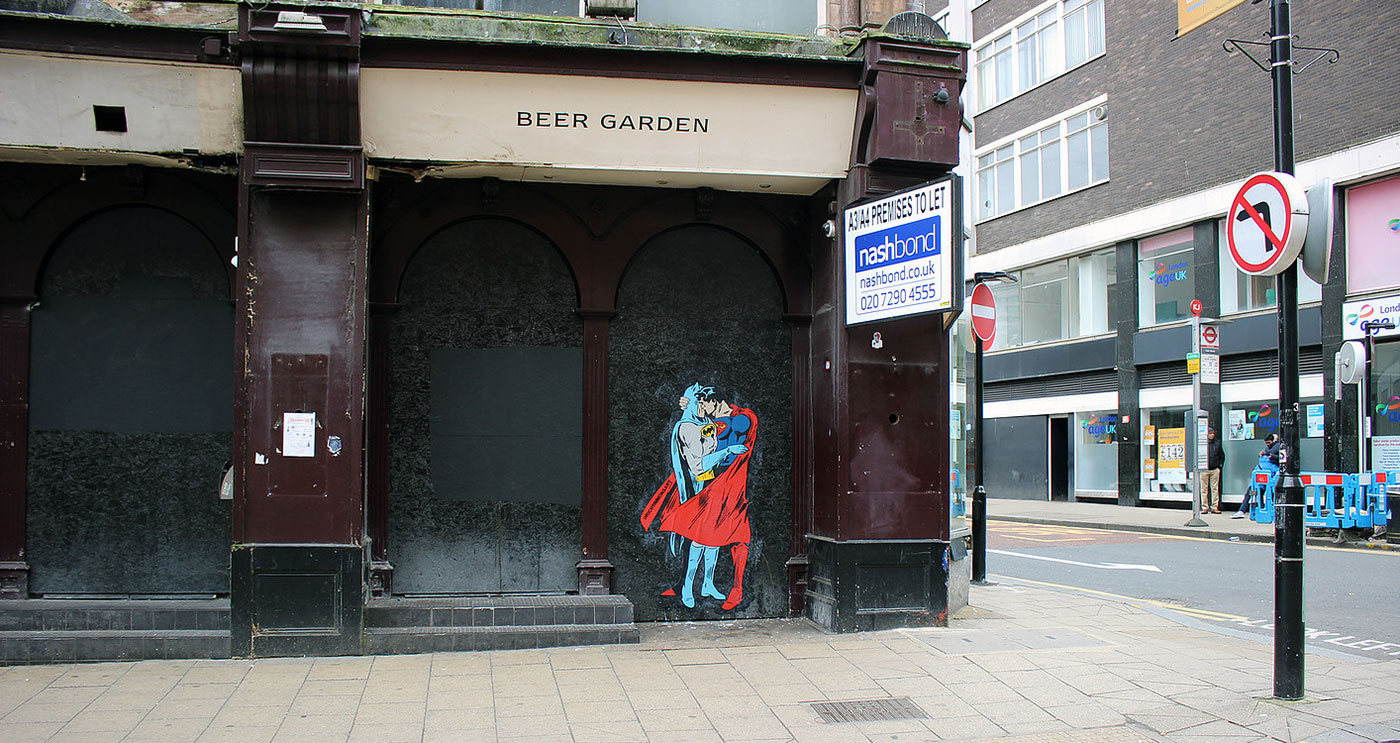 Croydonist: Superheroes feature a lot for you. What’s their significance?

Rich: I love comic books and superheroes represent a lot of different things to me. I like to explore things deeper and use characters people know and love by putting them in scenarios and positions you’d never see them in to tell a story, express an idea or create discussion about an issue. By using a character you already have an emotional relationship with, you have an instant engagement with the viewer to tell the story and create the emotional reaction that gives the painting more power.

Croydonist: You’re a renowned street artist – if you could choose anywhere in the world to create a mural, where would it be?

Rich: I have spent a lot of time in New York over the last few years, exhibiting and living there but I’ve never had the opportunity to do a large scale mural there so I’d love to tick that box but my dream would be Tokyo. I fell in love with Japan when I went there last year and would love to go back and leave my mark on Tokyo with some of my art. 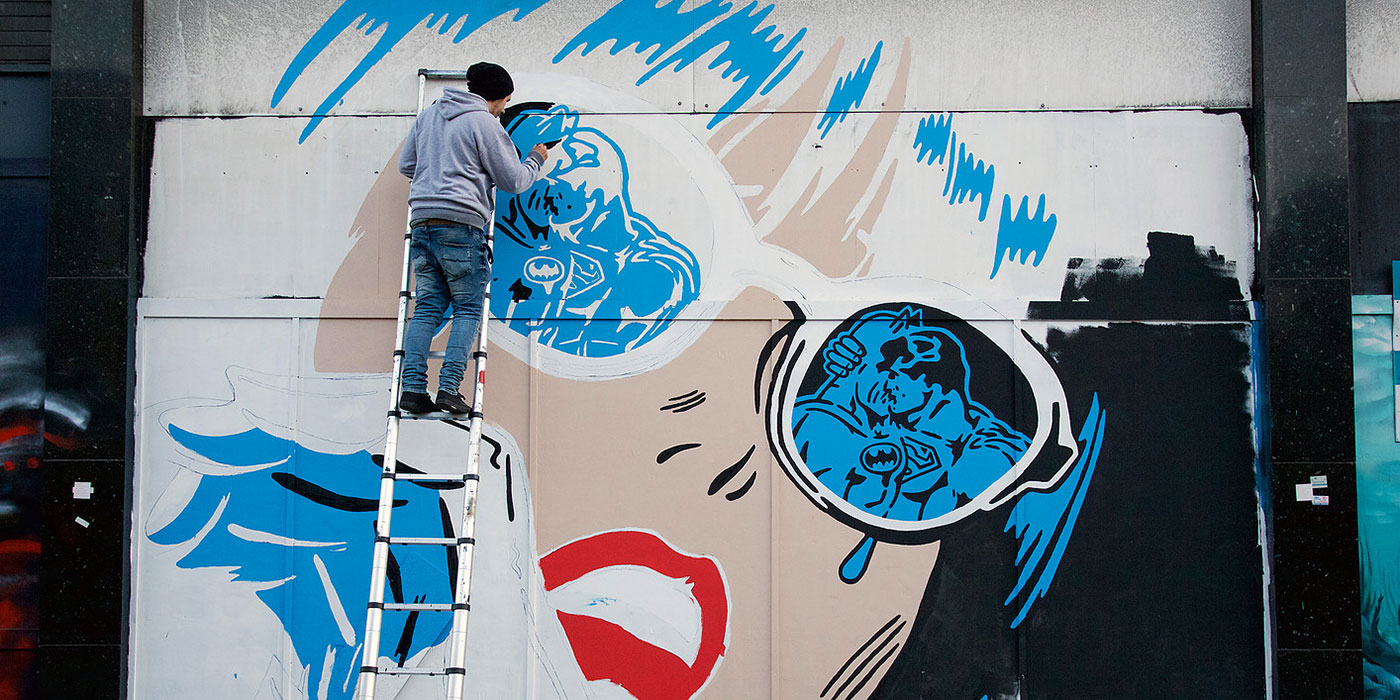 Croydonist: Working outside on a large scale must be difficult sometimes. What’s been your trickiest piece to create?

Rich: I have been getting more opportunities to go bigger and bigger with my art this year and it’s now at the point where I need cherry pickers to get high enough which is always an adrenaline rush. Being up that high, trying to keep my balance and painting at the same time is a challenge and gives you jelly legs for a couple of days but its a huge buzz to get opportunities to go big and push my limits, both artistically and personally. 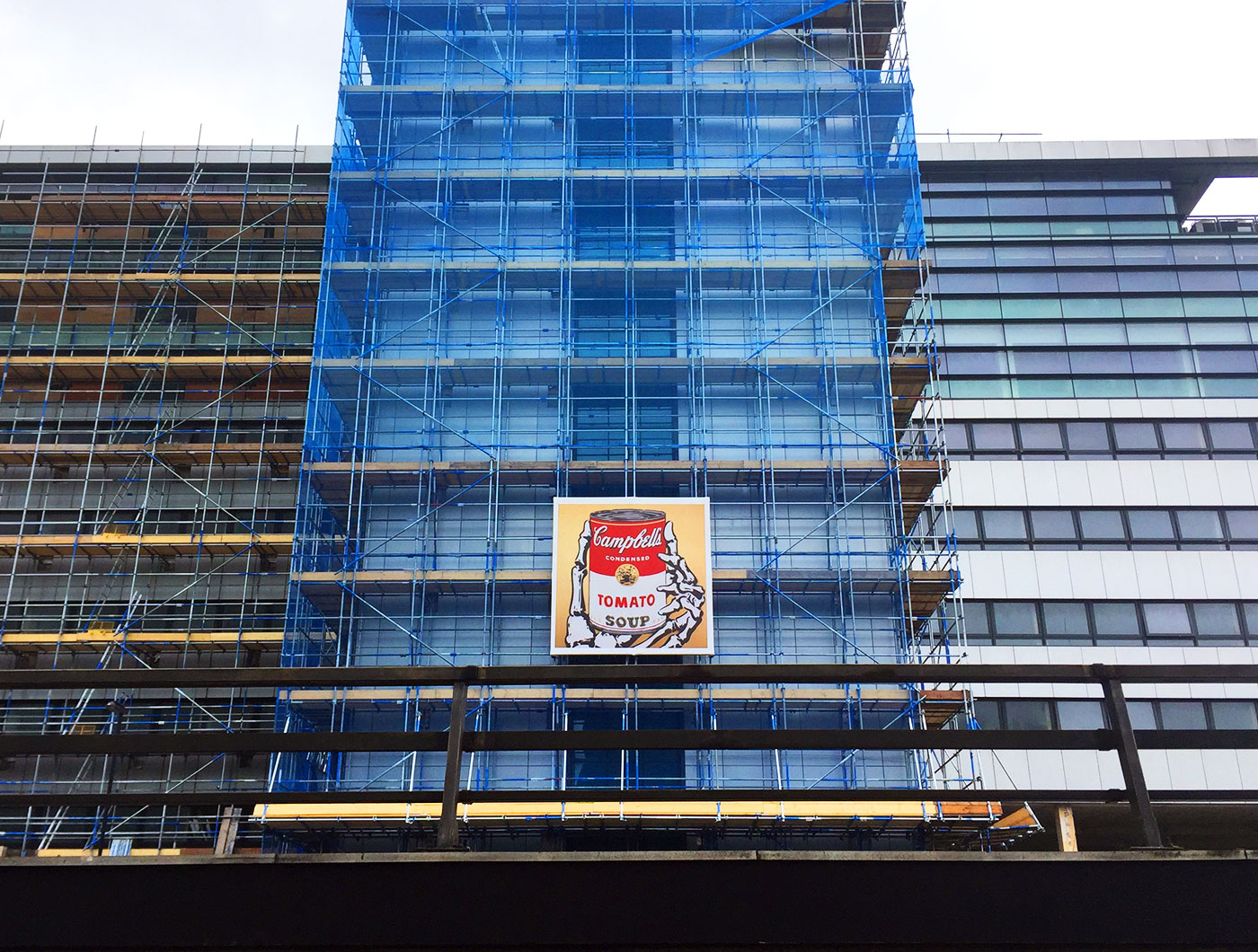 Croydonist: You were one of the artists chosen to create a piece of work for the Croydon Warhol Festival this month. How did you come up with the idea and what does Warhol mean to you?

Rich: I did a painting a few years ago with the skeleton hand holding a bottle of Chanel and the idea was that it’s a commentary on vanity and relinquishing your grip on material things that you can’t take to your grave. The Warhol soup can replaced the Chanel bottle and it’s my commentary on deceased artists still holding such a grip on the art market and how your value and fame goes up more when you’re dead, and you can’t then enjoy that part of the artistic career. It’s probably the only career you can have where you get more success in death than life and that’s pretty messed up. Warhol changed the way people see art in a lot of ways and pioneered a new genre. His efforts and vision continue to inspire and influence artists to this day and that’s the sign of a true master. 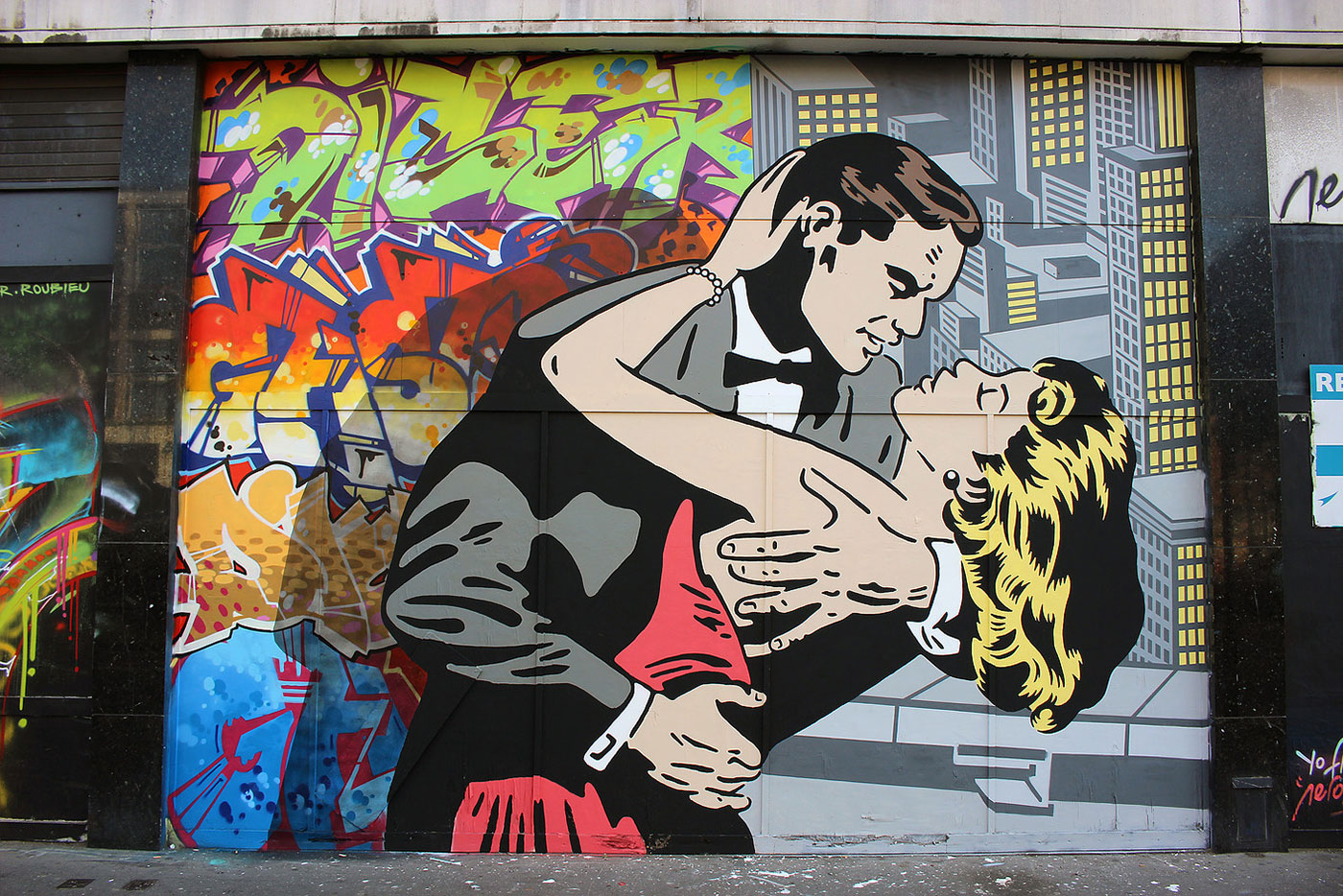 Croydonist: If you had to arrange a drinks party with famous artists (alive or dead) who would fill the top three places on your guest list and why?

Rich: Leonardo da Vinci is my hero so he would be first on the list. I love the way he was such a genius in so many fields and was the true renaissance man. I would invite Banksy so I can get to know the man behind the mystery and Salvador Dali because I think he was a mad genius and would be a laugh to hang out with. 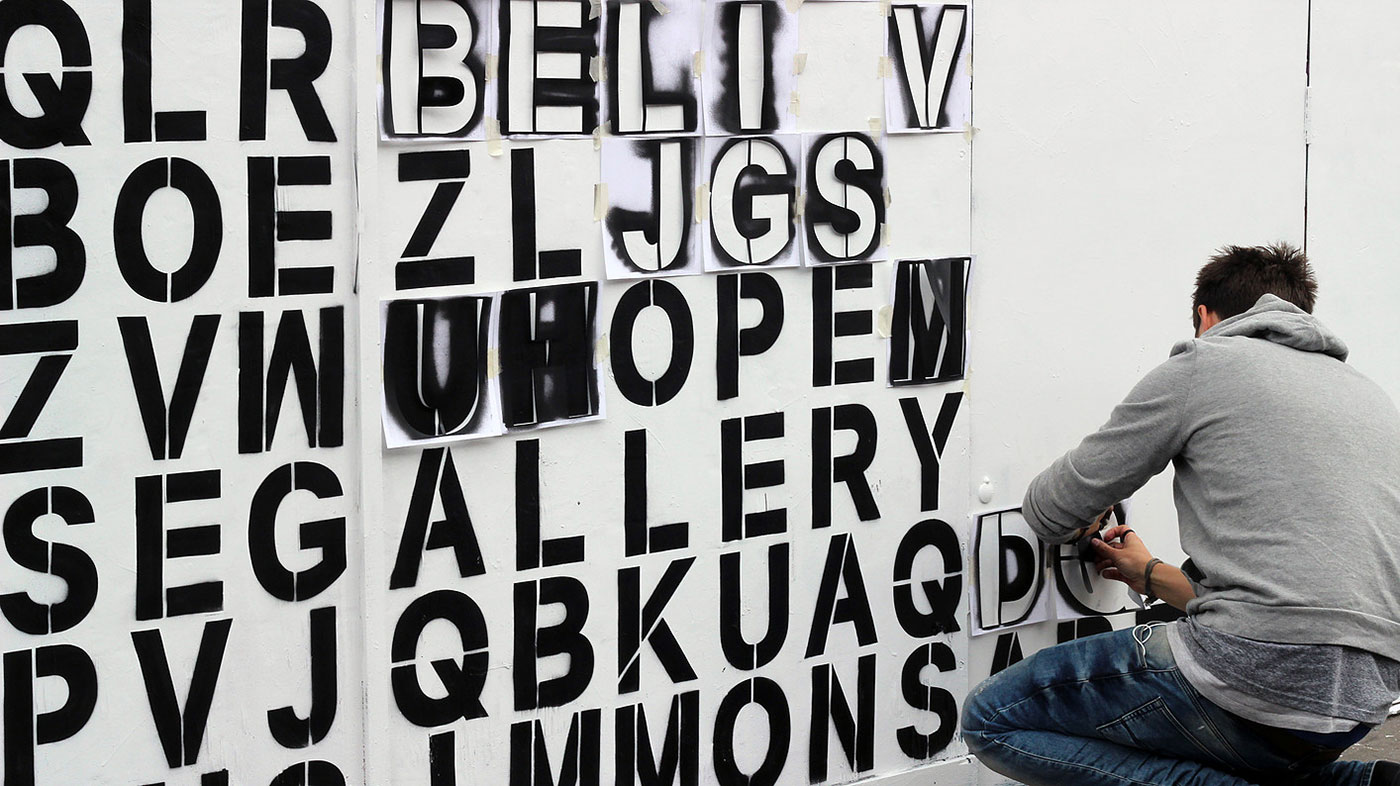 Croydonist: You’ve exhibited all over the world. This year you’ve set up studio in the centre of Croydon’s arts quarter. Why here?

Rich: Croydon is perfect for me right now. I spent a lot of time in New York and saw the impact art had on shaping the growth of parts of Brooklyn and I can see a similar thing happening in Croydon and I want to be part of that. Art can shape the growth of an area in a lot of ways and with it being so close to London, having a studio space in the heart of the arts quarter and a lot of friends in Croydon now, it feels right. I’m hoping Croydon continues to grow and my art can play a small part in encouraging more people to invest time and creativity here. 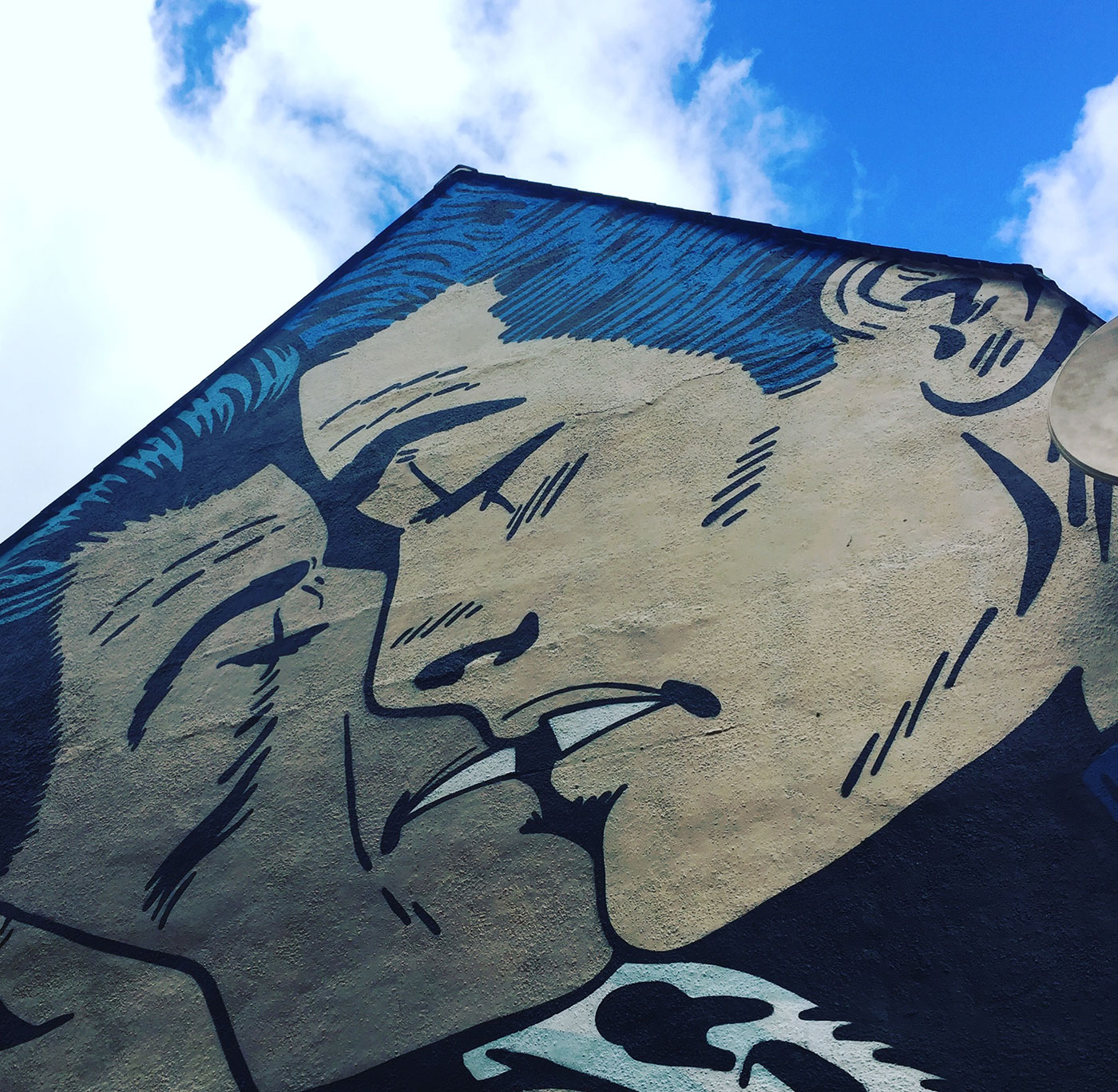 Croydonist: You’re an extremely busy artist. Can you tell us about your current project and what we’ll see next?

Rich: I’m getting ready for a new solo exhibition in New York in October which is very exciting and taking up a lot of my time. I have art in the RISEgallery Warhol month which is a huge honour. I’m very proud of Kev and the team for organising that and bringing something unique and special to Croydon. As soon as I get home from New York I will be spending the winter setting up a new company and planning some new artwork for 2018, and keep things moving in the right direction and having fun doing it.

Thanks to Rich for chatting to the Croydonist – if you haven’t already, check out his work as part of the Warhol month street exhibition tour here.

All photos (except Princess Di, Men kissing, and Skeleton Soup Can) courtesy of Rich Simmons.