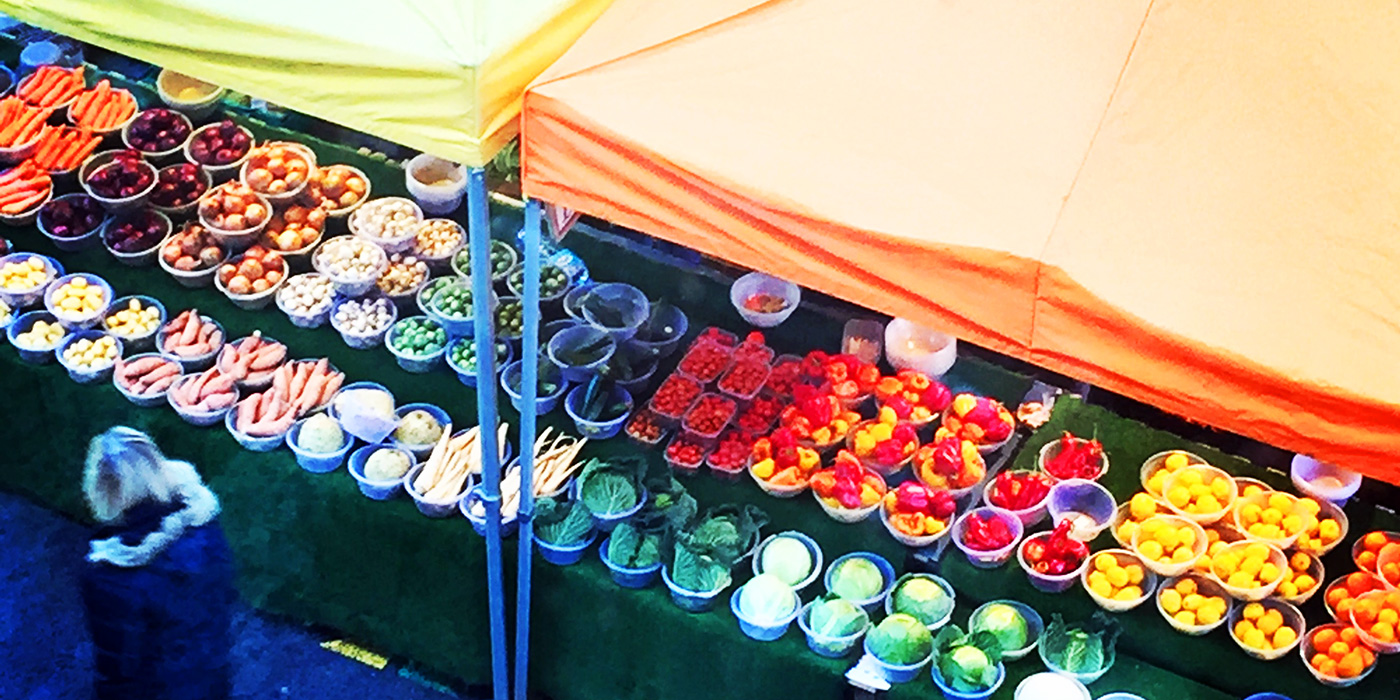 “Pound a bowl, pound a bowl!”, “cherry, cherry, cherry!”. Hear that? That’s the sound of Surrey Street Market, the largest and longest established market in the Croydon borough. Awash with colour, texture and scents, the market is a hive of abundance – no wonder the locals refer to it as the heart of Croydon.

It is alleged Surrey Street is the oldest street market in London, with records dating back to 1236. The medieval market was granted a charter by Robert Kilwardby, Archbishop of Canterbury, in 1276. The market has gone by different names; the Shambles, the Flesh Market, the Butcherie and Butcher Row. The slant of the road was conducive in allowing blood and other fluids to run away, making its past alias all the more graphic.

The outdoor bazaar has transformed over time; in 1314 it dealt in corn and cattle, then the range of merchandise was extended in 1343. In 1922 the market began to open daily. Now, on weekdays you can expect lots of fruit, veg and household items, and at the weekends more artisan wares and street food.

From aloe vera stems, handmade-sourdough and Thai orchids to exotic beads and Afghan eats, the thoroughfare boasts an array of produce unavailable in supermarkets, for just a fraction of the price. Friendly faces who never fail to say hello, a community of hardy vendors who sell whatever the weather and an eclectic mix of devoted buyers is what makes Surrey Street my favourite place in Croydon. Having shopped at the market for a few years now, I decided to find out a little more about the traders and their stalls…

Rosanna
Owner of Love It Nurseries 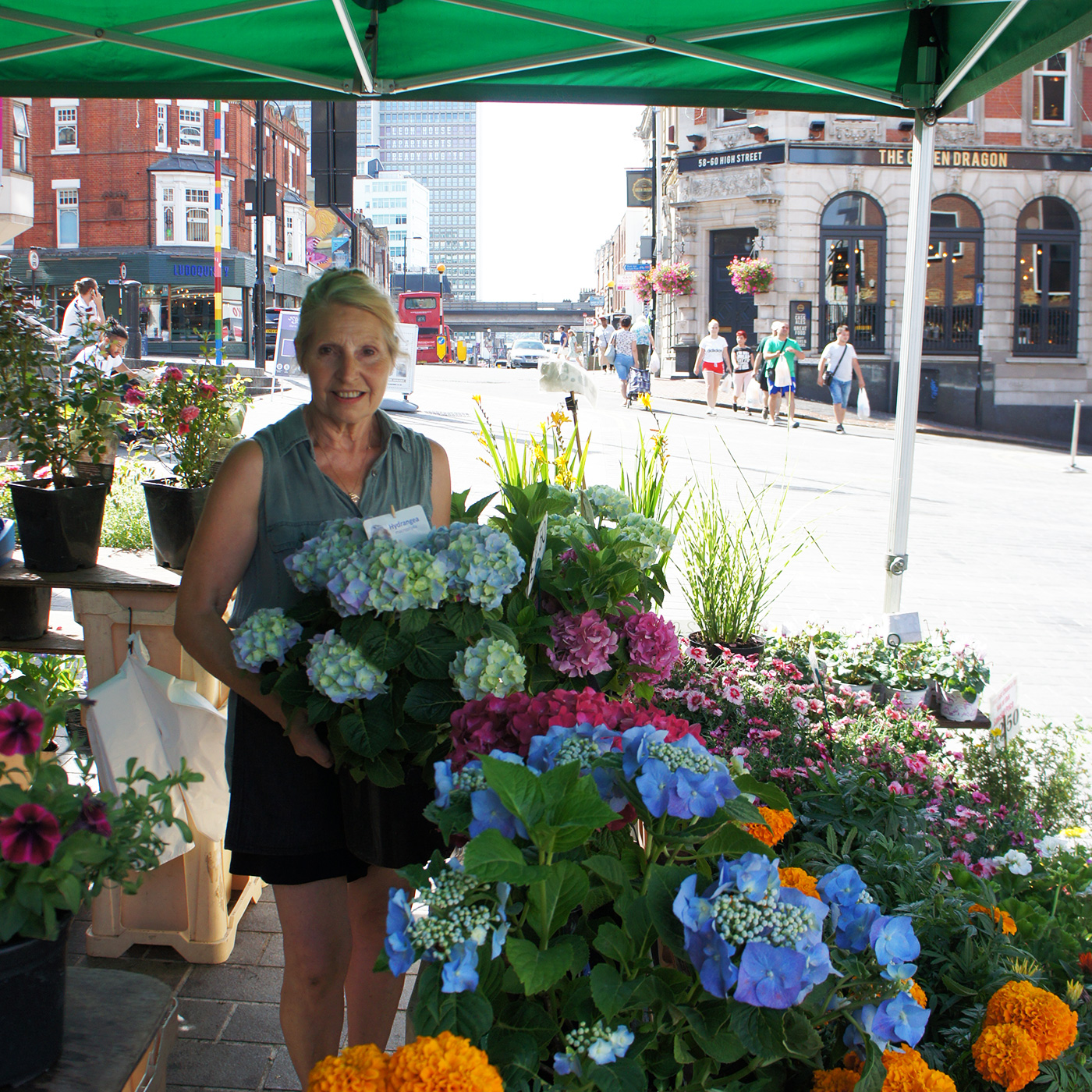 Rosanna: This business has been in the family since 1897, started by my great grandfather.

Grace: Who are your customers?

Rosanna: Locals, regulars, people coming from far and wide, from places like Brighton and the coast. Lots of young people come to the stall who’ve never had a garden and are excited. We advise them on what to plant first, then they come back for more. The supermarkets don’t do that.

Grace: How do you see the market in the future?

Rosanna: The market is a great starting place for small businesses and entrepreneurs. The market itself could die, but it could survive in a big way if it is advertised and presented differently. I think we should have a museum to educate people about the market’s rich and fascinating olden days, it would draw people in. There should be images relating to the market’s bygone era. It has a huge history, we are all history. 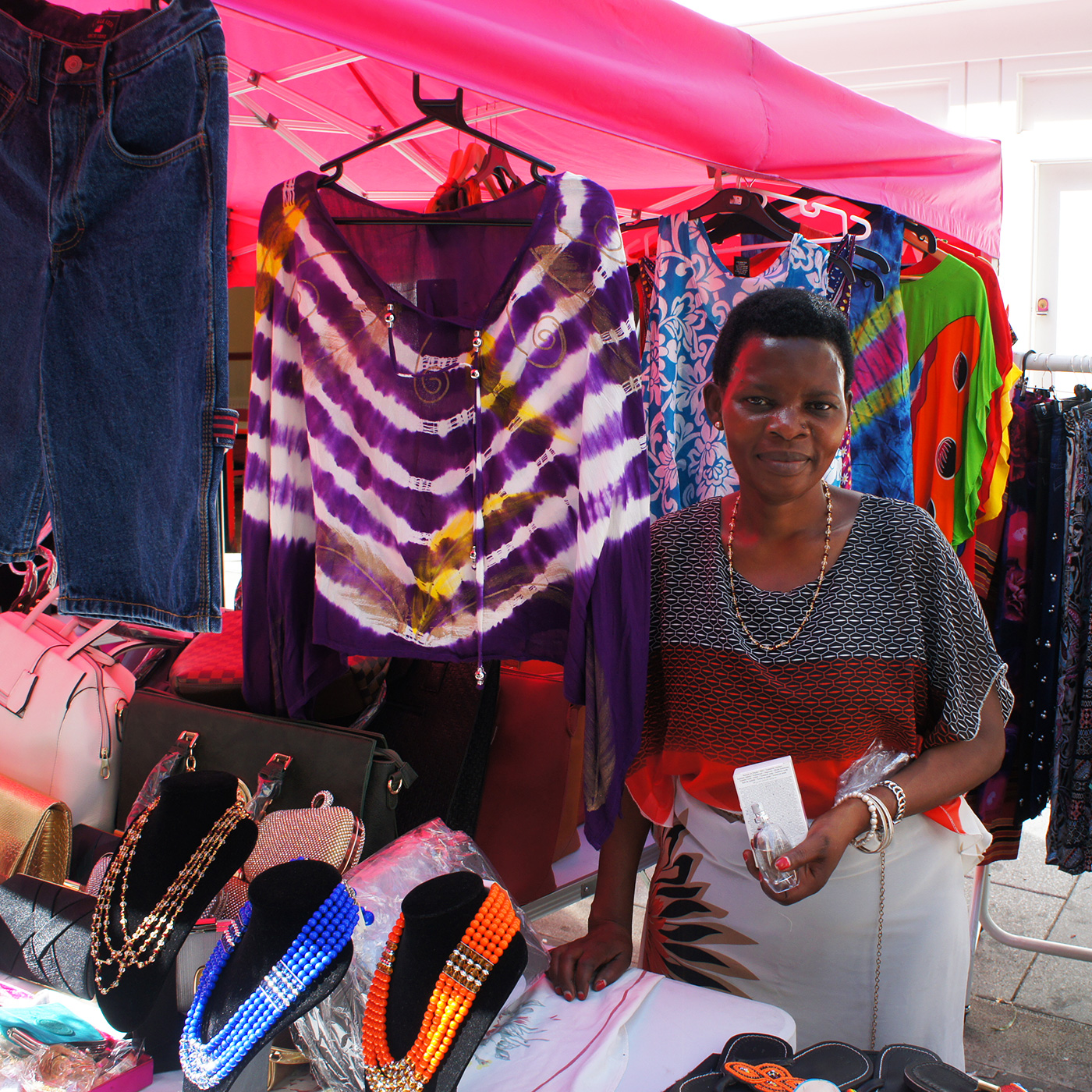 Edith: Seven months now, the market stall is an extension of my shop behind.

Grace: Why did you choose Surrey Street Market to run your business?

Edith: I was looking for a shop and a friend recommended I come here.

Grace: What’s the best thing about the market?

Edith: It’s the customers you get, the diversity and community.

Al: I sell what’s good, is in season and value for money. Today we have pomegranate, kiwi, Indian mangoes and sweetcorn. Also kohlrabi (German turnip or turnip cabbage) that you eat with salt, Chinese people like it.

Al: Fifteen years, though I’ve worked on markets for 35!

Al: A mixture, lots of regulars.

(Al is obviously a popular man on the market. He answers questions between laughing and chatting with his patrons. He thanks a customer in Mandarin who corrects him that she speaks Cantonese. She then teaches him thank you in her language and says she will check next time that he has remembered. Another lady retorts “He’s so funny, a very lovely guy.”)

Grace: How have you seen the market change?

Al: Twenty years ago, all the stall holders and customers were English. Now it’s very multicultural. 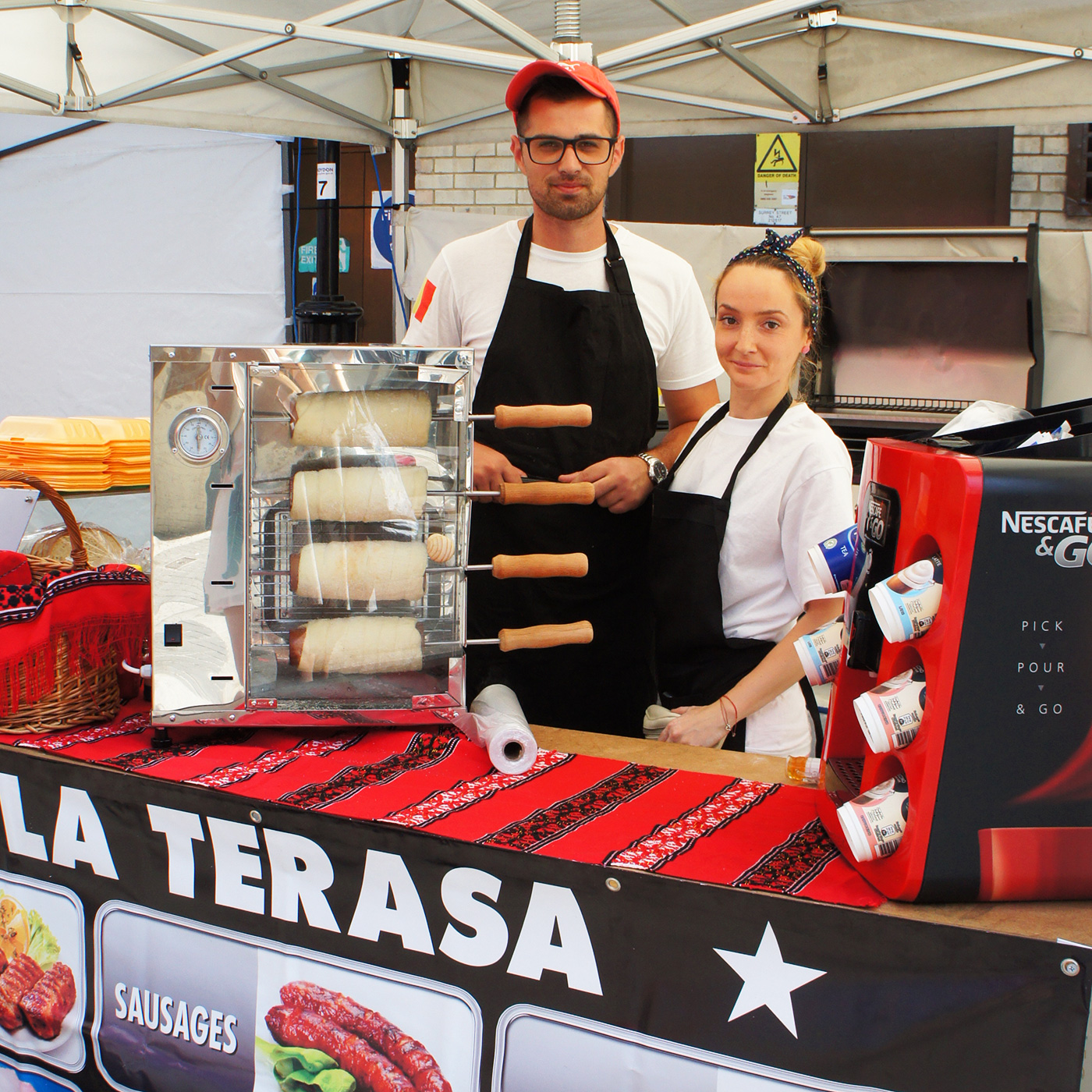 Alin and Maria: Traditional Romanian street food.  Made with herbs and lots of grilled meats, pork and beef mainly. We also do Hungarian kurtos or chimney cake, which is cooked on a hot cylinder. We have a seating area or you can buy to take away.

Alin and Maria: Just two months on a Saturday and Sunday.

Grace: Why did you choose Surrey Street Market to run your business?

Alin and Maria: There is a Facebook group, called Romanians in Croydon which has 7000 people in it. So, we noticed there is definitely a market out there for Romanian food.

Grace: How do you see the market in the future?

Alin and Maria: Growing with new people coming. Hopefully after two or three years, it will get known for its street food. Then people will choose it over going to McDonalds! 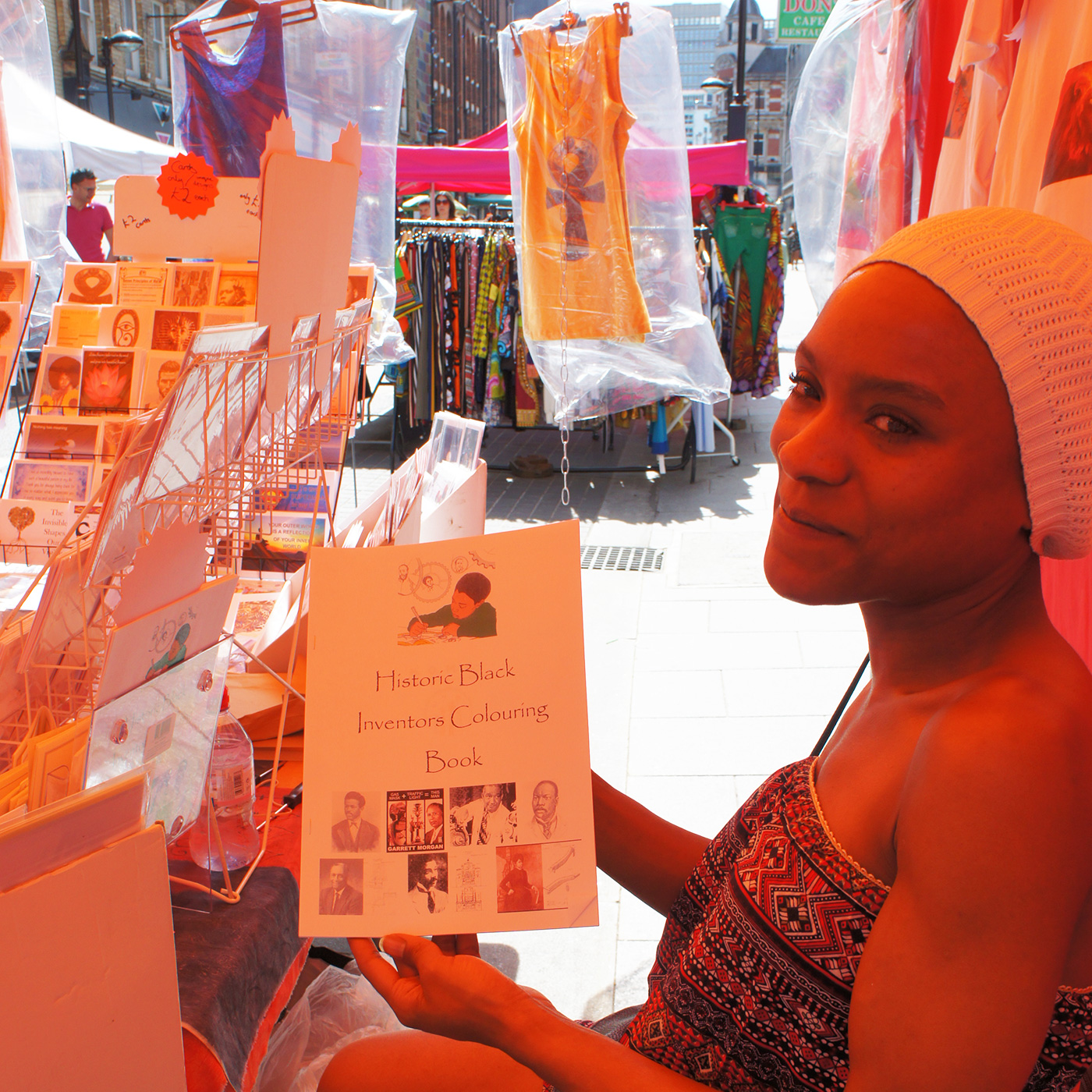 Isschara: Black and ethnic artwork, cards, books, T-shirts and prints. I create them using graphics, collage and adding words. Some of the designs have quotes or poems from famous black icons such as Maya Angelou, Malcolm X and Martin Luther King. I have also designed a black history colouring book.

I think there is a gap in the market for black and ethnic art. I am personally interested in black history and have done several courses in it. You can study it at Black History Studies, in North London or CSEP on Sydenham road.

Isschara: Two months now. I work at the council, but this is my passion.

Isschara: The diversity of people.

Thank you to Rosanna, Edith, Al, Alin and Maria, and Isschara for chatting to me about their businesses. Surrey Street Market has survived over 740 years by adapting to cater to its evolving audience. The impact more property development and a new mall in the town centre will have on the traditional market is debatable. However newcomers with fresh ideas for commerce and their respective emerging markets instil a confidence that Surrey Street’s longevity will endure for future generations.

Posted by guest writer Grace Robinson (all portraits by Grace, header image by the Croydonist)

Thank you. Very interesting and as a social part of the locality it brings people together to browse and chat. I hope it continues.

I use the market regularly. Nice to read a bit about the traders. Rosanna is a lovely and knowledgeable lady who sells good quality plants at very competitive prices.

Great article! So nice to learn more about the legendary Surrey’s Street stallholders!

I am trying to work out the location a 70’s photo that has an H Powis sack barrow in it. Does anyone know whereabouts their stall was ?

Eddie, Harry Powis had a fruit stall at the corner of Bell Hill. His twin brother, Ike, had a salad stall opposite.