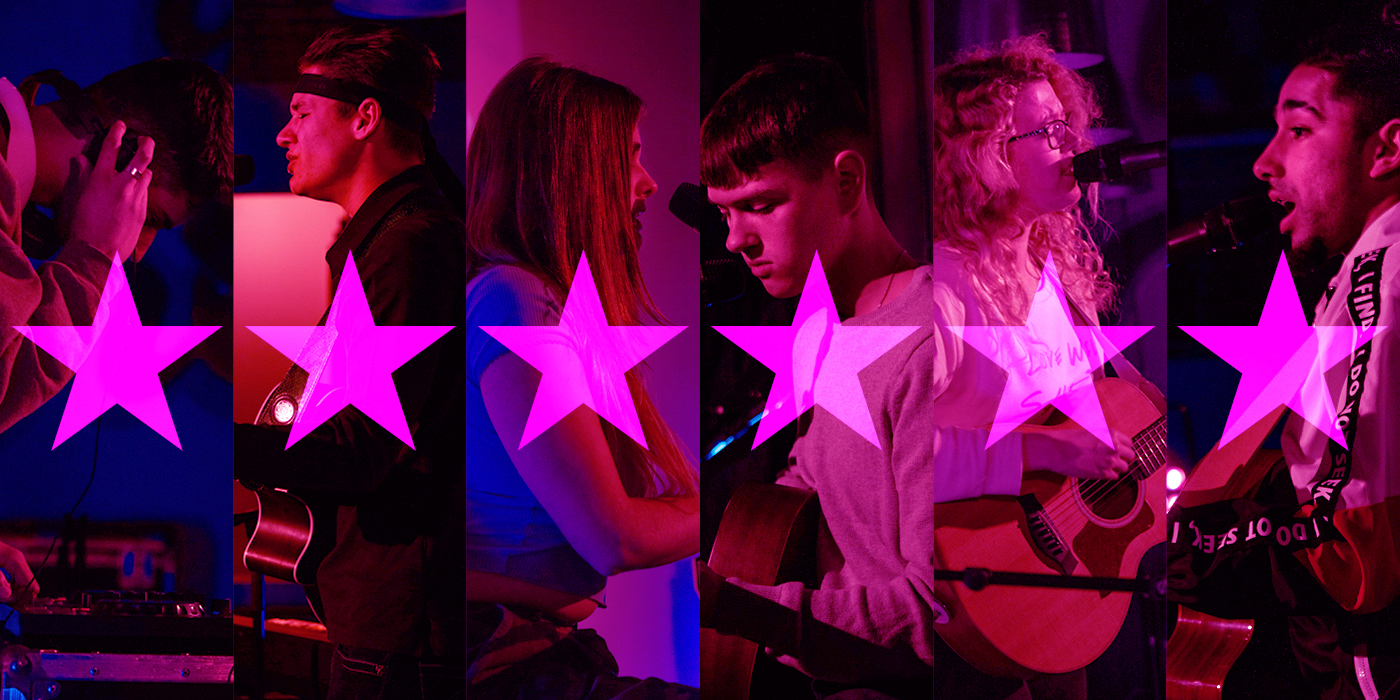 Earlier this month we headed down to the first TMRW Sessions – an evening featuring 6 emerging artists from Croydon’s BRIT School (you know, the place that has produced a HELLUVA lot of talent, including Amy Winehouse, Adele and Katie Melua), in their Yo Croydon space, set up to create a chilled vibe with sofas, chairs and even plants. All, for the bargain price of a fiver.

Our guest writer Rhiannon Cobb, a student at the BRIT School herself, reviewed the night for us, to whet our appetites for TMRW’s next sessions on Thursday 11 July. 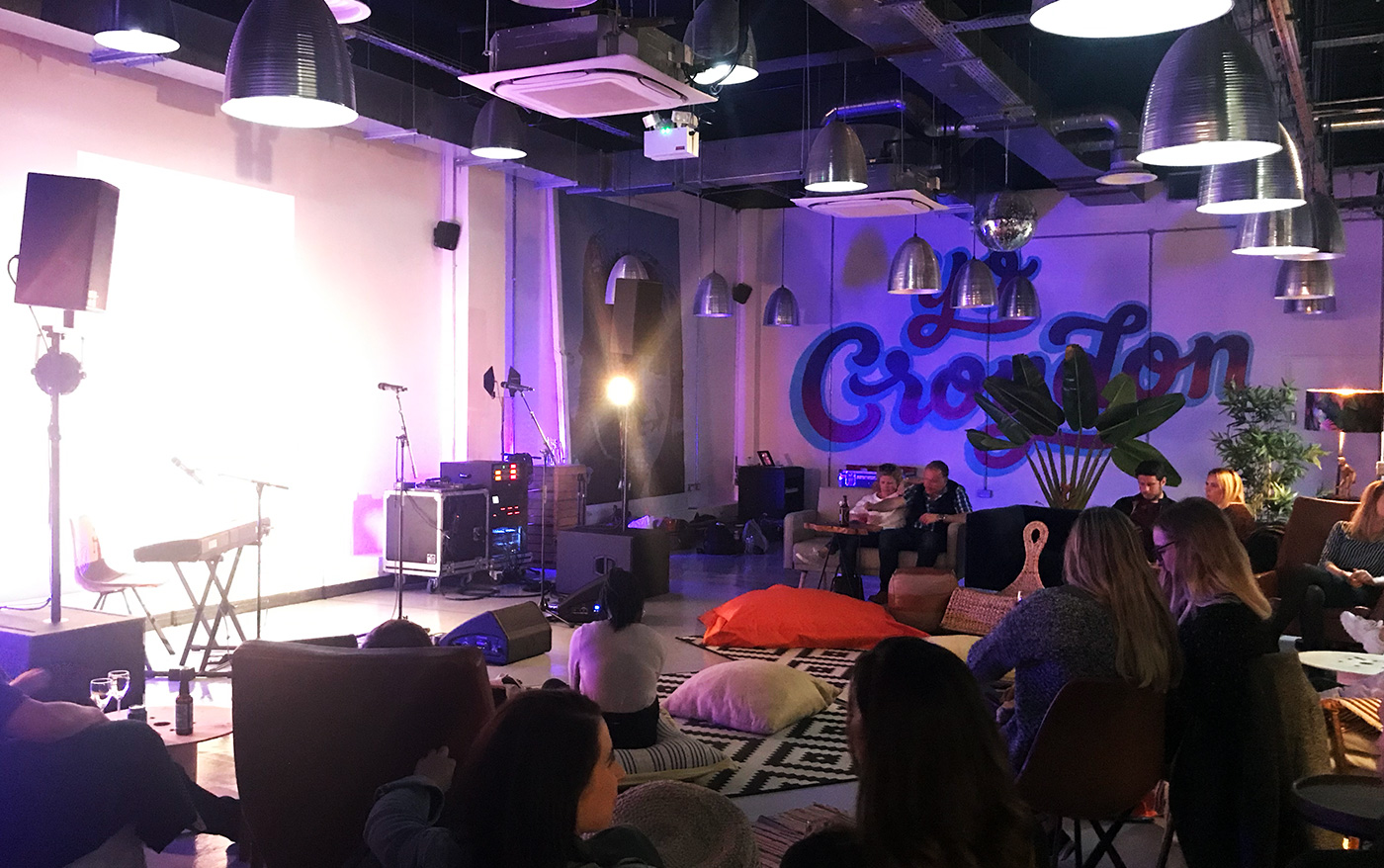 The TMRW hub is not only a beautiful set up but the largest coworking space that welcomes entrepreneurs and digital businesses in South London. A couple of week’s ago  the downstairs space was turned upside down to create an intimate venue, that showcased the next generation of upcoming BRIT school students.

The BRIT school was home to some of the most influential artists like Adele and Jessie J until they skyrocketed to fame in the years after their graduation. The TMRW hub organised a space to catch the aspiring artists before they shoot to stardom and it surely was an experience! The chilled atmosphere was comparable to that of Sofar Sounds and nesting the stage were comfy cushions and chairs. This ideal layout allowed the audience to close their eyes and fully focus on the music. Tom Stafford from Canning Town opened the stage wearing his signature black bandana. He played his own original songs and they were certainly a success with the audience. His whistled tune was extremely catchy and his voice had an earthy feel to it. Tom is hoping to go to a studio very soon to record his unique sound that was inspired by Bob Dylan. His drive and passion to succeed in the industry will definitely take him far. 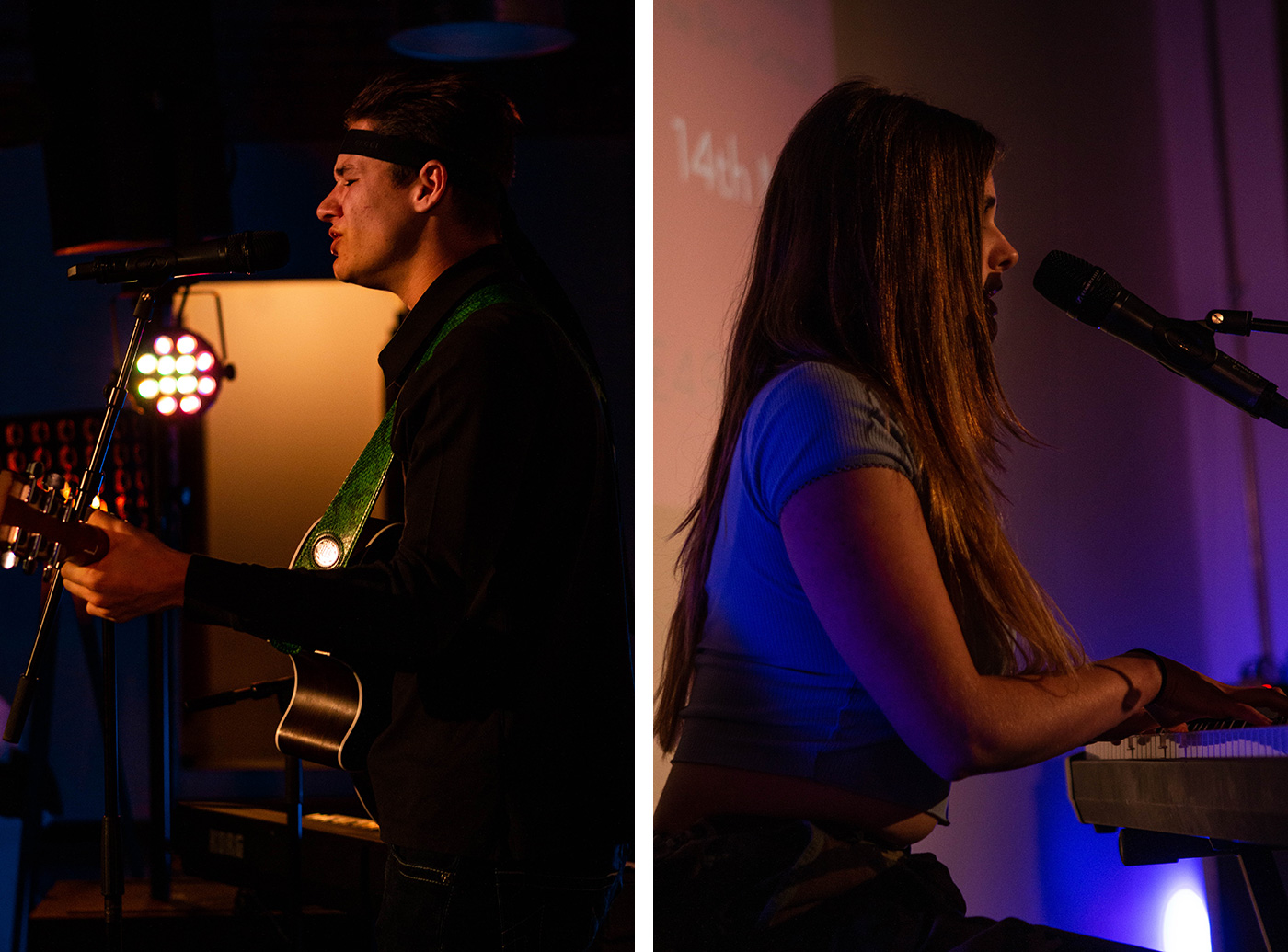 Amy Hardman was up next to the stage and blew the audience away with her song “Done it Again.” Her voice worked in hand with her piano skills and was completely effortless, she completely captivated the audience. Earlier on in the year, Amy worked on the music video for her song with film and media students who also attend the BRIT school. This gave her the opportunity to get a feeling of what it is like being the subject of the camera and lip syncing to the lyrics. It will not be a surprise that Amy will be the subject of many more music videos in the future. You can find and give Amy’s song a listen over on SoundCloud you will not be disappointed! 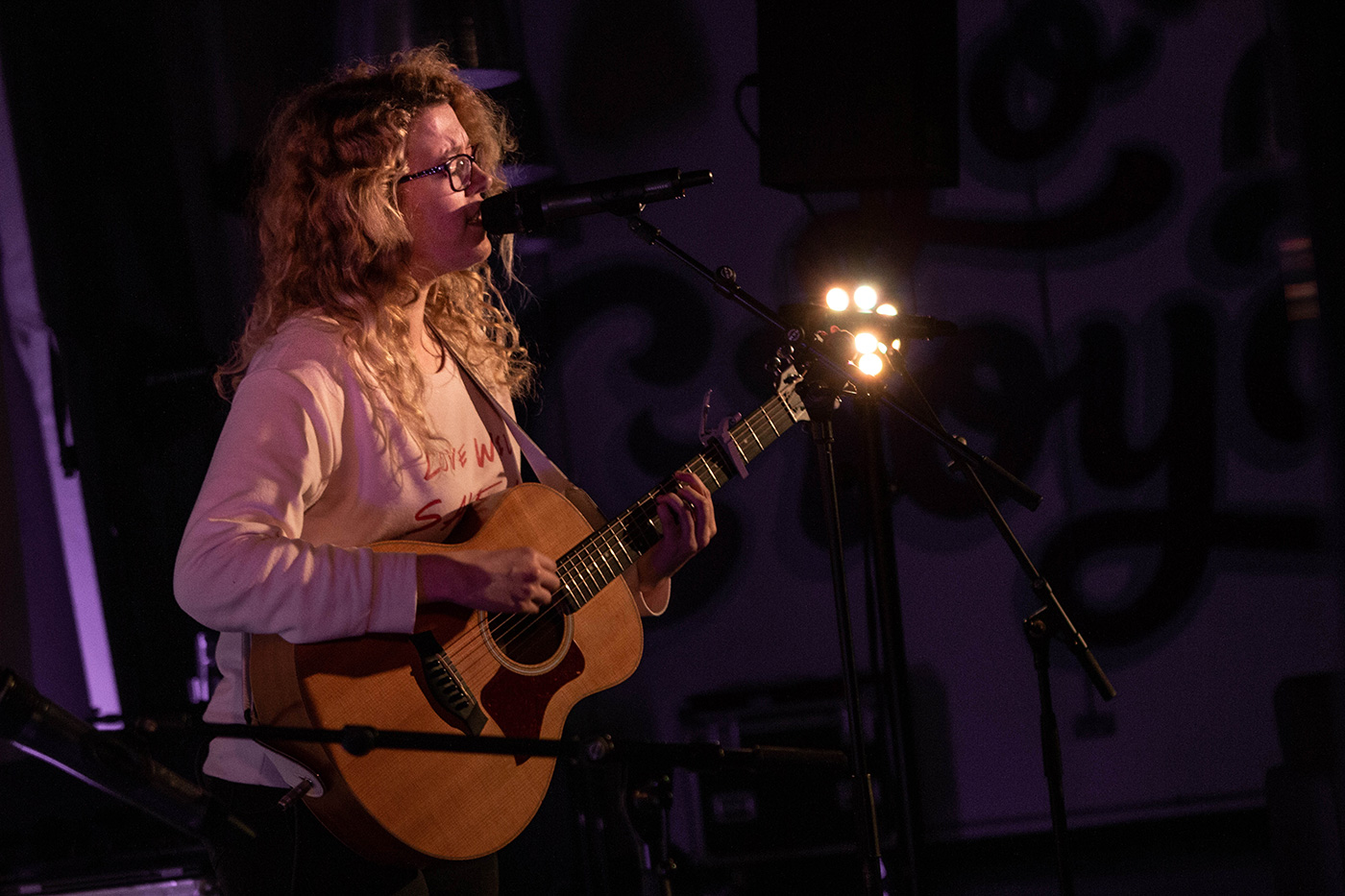 The third performance from Leah Haworth allowed the audience to really listen to personal and meaningful lyrics. It was a very special night for Leah as it was her last ever gig as a BRIT school student. Throughout her two years studying she has been able to produce and record her own EP “Midnight Loneliness” entirely by herself, which is a huge achievement. Her voice was delicate but powerful; her expertise in her song “Shining Morning” was spotted by Riverside Radio and was even awarded their track of the week.

After Leah’s outstanding performance there was a short interval where the audience was able to get some refreshments from the bar. There were even some vegan sausage rolls – delicious! Soon after, Zack Marshall took to the stage and certainly changed to tranquil atmosphere into a party with his drum and bass. The sixteen-year-old music producer and DJ from Sutton got the whole audience dancing along wishing they were at a festival! His new song “io” is currently out now on streaming platforms with Dee Mash. 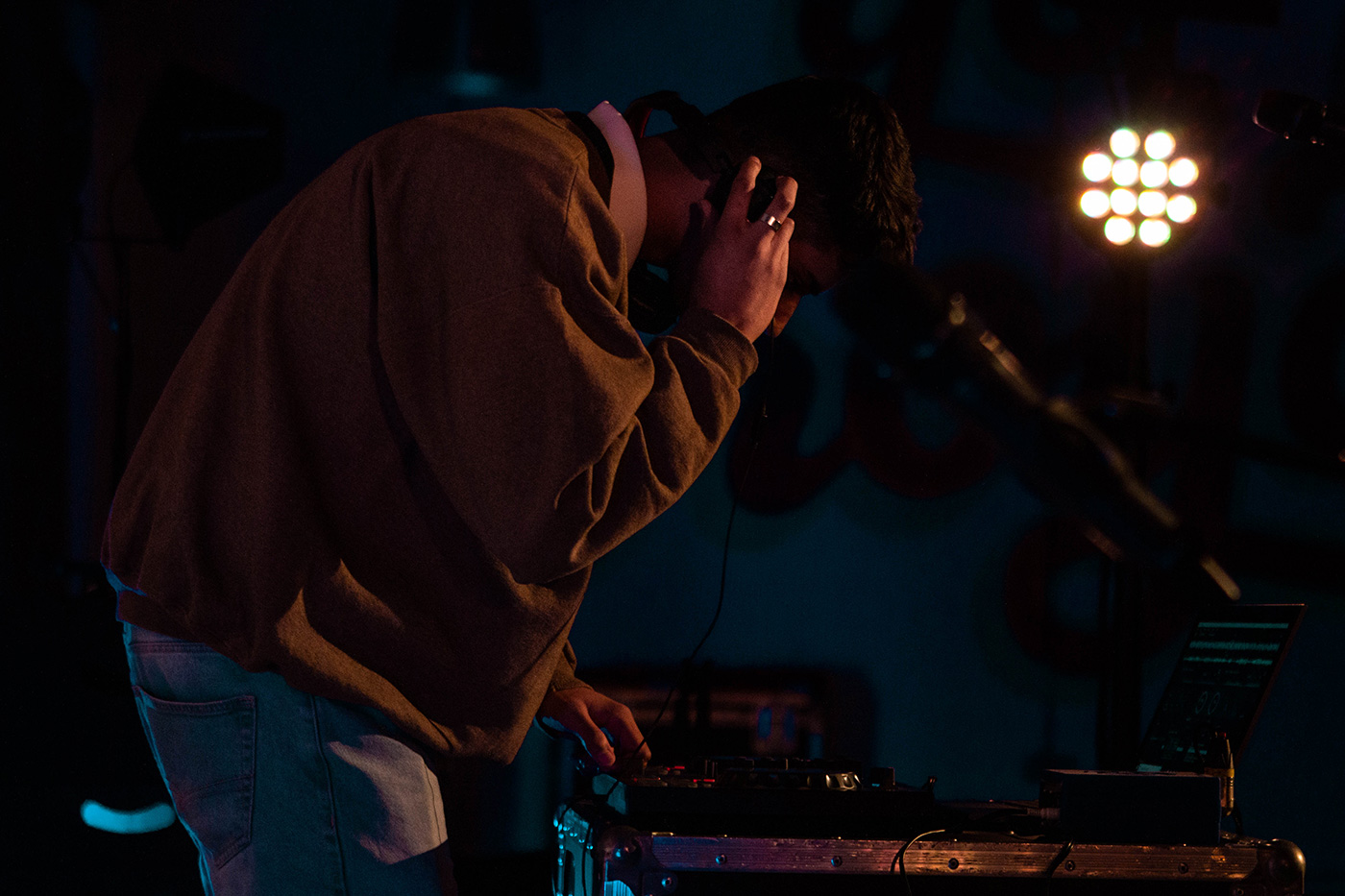 After the energetic mood that was set by Zack, Leon J Benson brought us back to the peaceful atmosphere and we were immersed in his music. Leon’s style is similar to that of Rex Orange county who also attended the BRIT school in his teenage years. His indie tunes have a jazzy feel and he usually performs with his band. The audience at TMRW was lucky enough to see a stripped back version of his songs with an acoustic guitar. You could really feel the emotion pulsating through his veins. He certainly has a future ahead of him. You can catch him at the Railway Tavern in Tulse Hill on 15 June. It is free entry so you will not want to miss out on his talent! 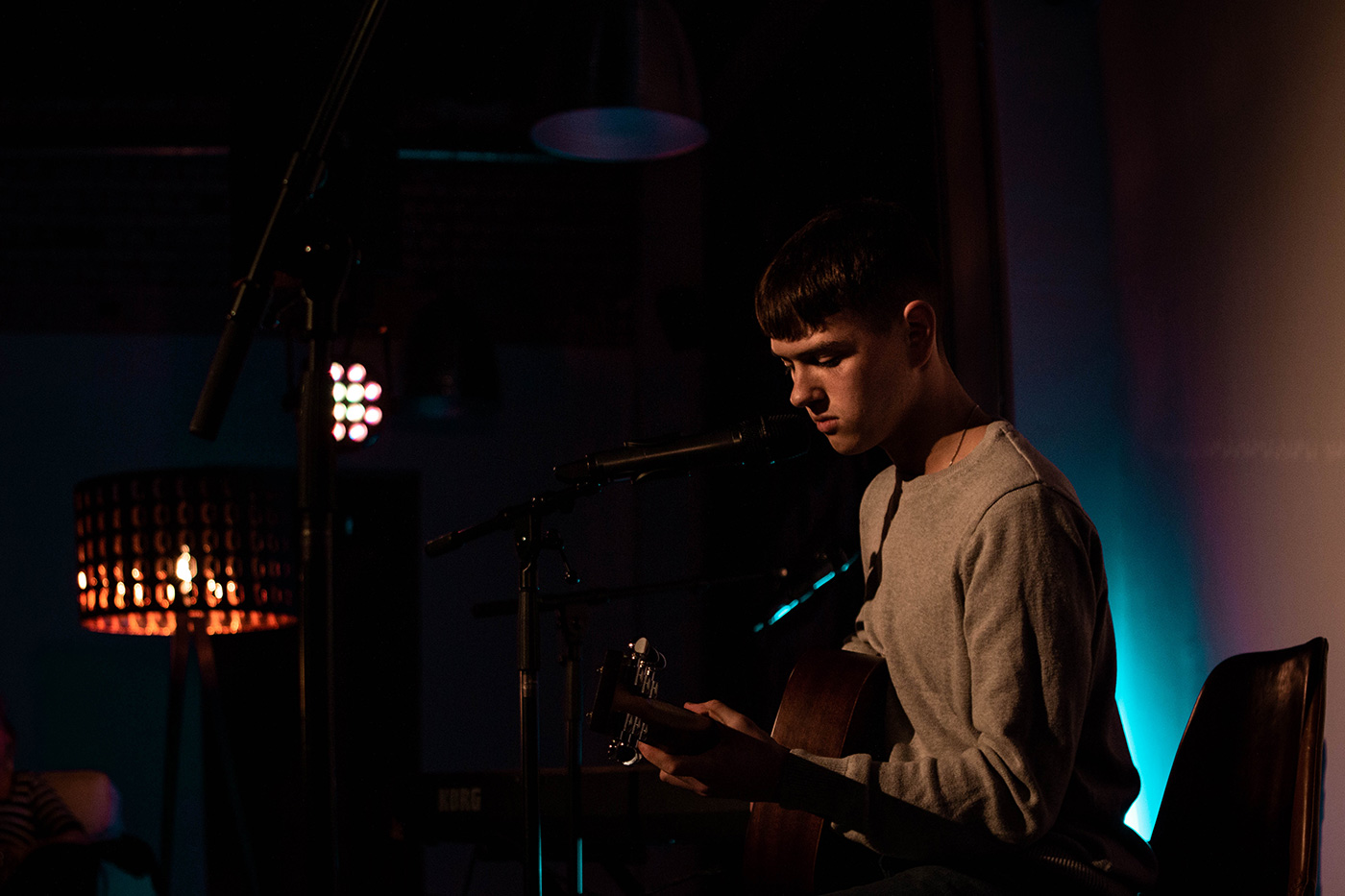 Latyno Bbi from Streatham is not only passionate about his music career but is heavily involved in fitness and living a healthy lifestyle. He closed the night with an energetic number and his cheeky and vibrant personality came across in his performance. The vibe of his music is familiar to Ed Sheeran and Craig David and his song “Love Game” demonstrates just this. His music is extremely popular with the ladies and he certainly can get a crowd to groove. 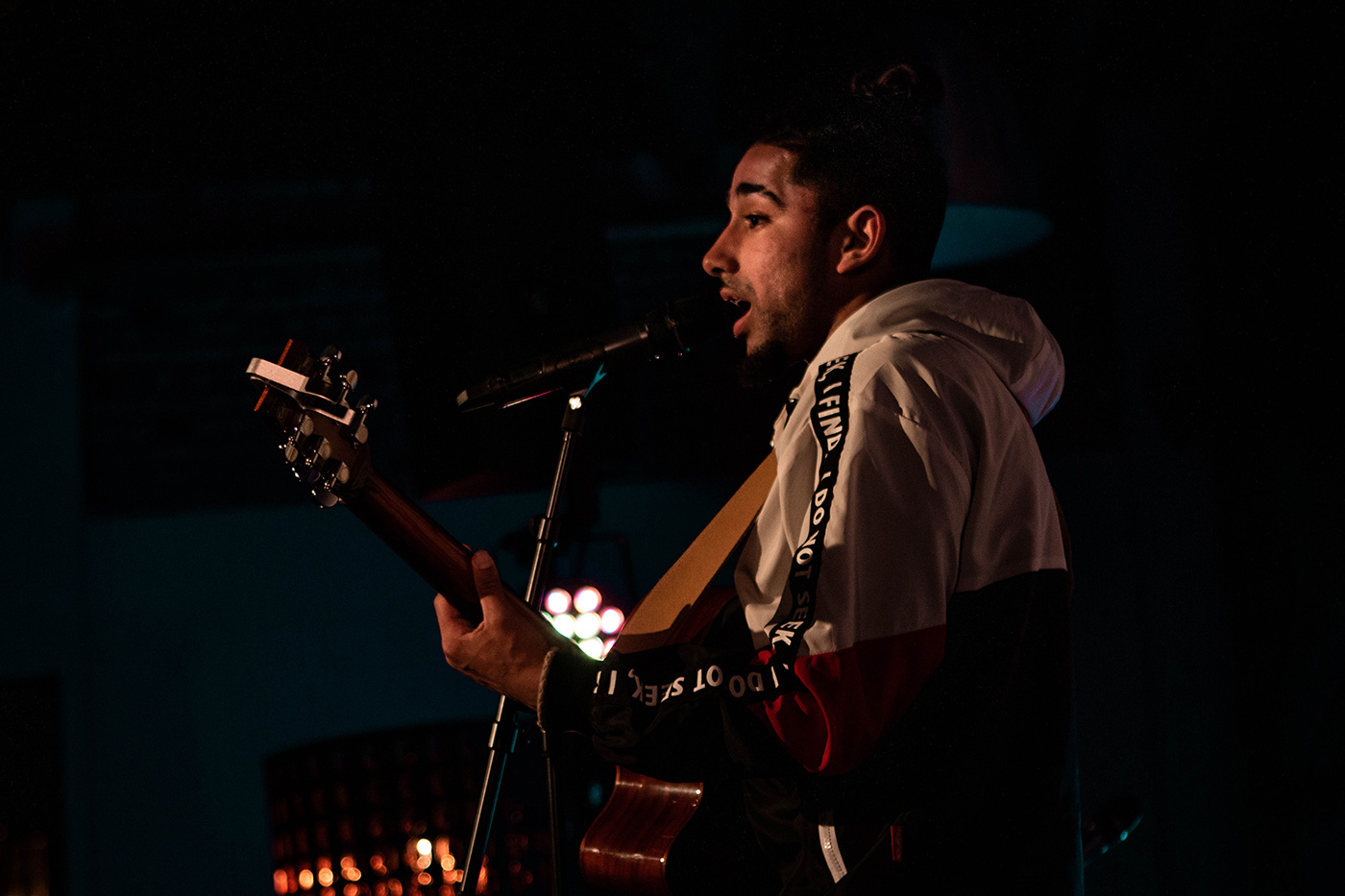 Overall, the outstanding performances and the intimate venue of TMRW were astonishing. It was truly an exceptional event with all the artists having their own original songs. They are unquestionably destined to have promising careers in the future. So keep up-to-date with these up-and-coming artists as they have big things coming. The gig was such a great success TMRW are hosting their second event with BRIT school students on 11 July so listen out for that!

Thanks to Rhiannon for the review. Grab your tickets to TMRW Sessions on 11 July here.

All photos by Rhiannon Cobb, except the ‘Yo Croydon’ photo, which is by the Croydonist

This sounds brilliant, Croydon = JOY’s on!
p.s. Rhiannon is also a multi talent for the future… well spotted again, Croydonist.