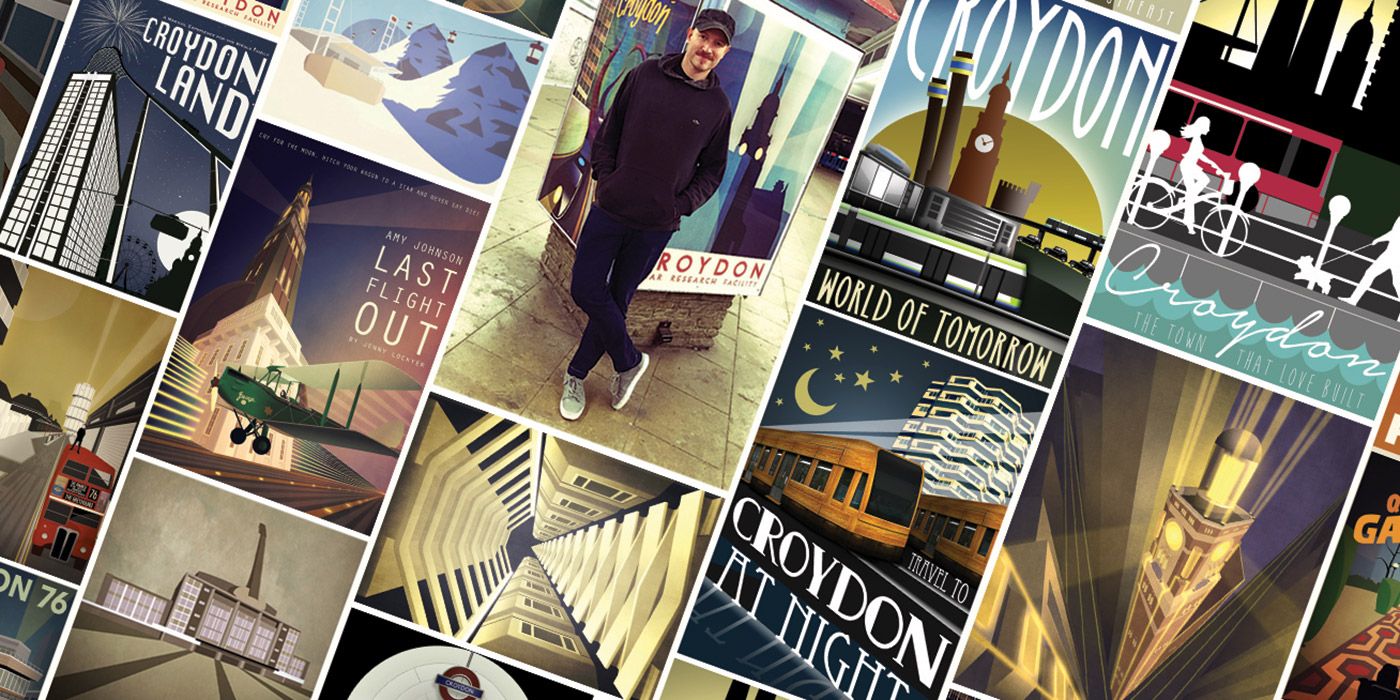 We first saw and fell in love with Gavin Kinch’s art in the ladies loo at the Oval a couple of years ago! Since then his mesmerising futuristic scenes have gained quite the presence in Croydon – with clients ranging from clubs and pubs to the council and the police, oh and just a few gargantuan banners at the entrance to St George’s Walk and an outdoor exhibition to go with it. We caught up with the man himself to hear more about his creations.

Croydonist: Firstly, what’s your connection with Croydon – native or convert?

Gavin: I’m originally from Addiscombe; we moved to my Nana’s house in West Wickham when I was young but I attended secondary school in Croydon so it felt like home in many ways. My earliest memories are the smell of the old milk factory at the end of my road, being pushed around the concrete spiral walkways in the Whitgift Centre and going to pick my brother up from Oval Road School. After university I returned to Croydon to work as a sound engineer and club promoter and it was there, by chance, that I would fall into graphic design. 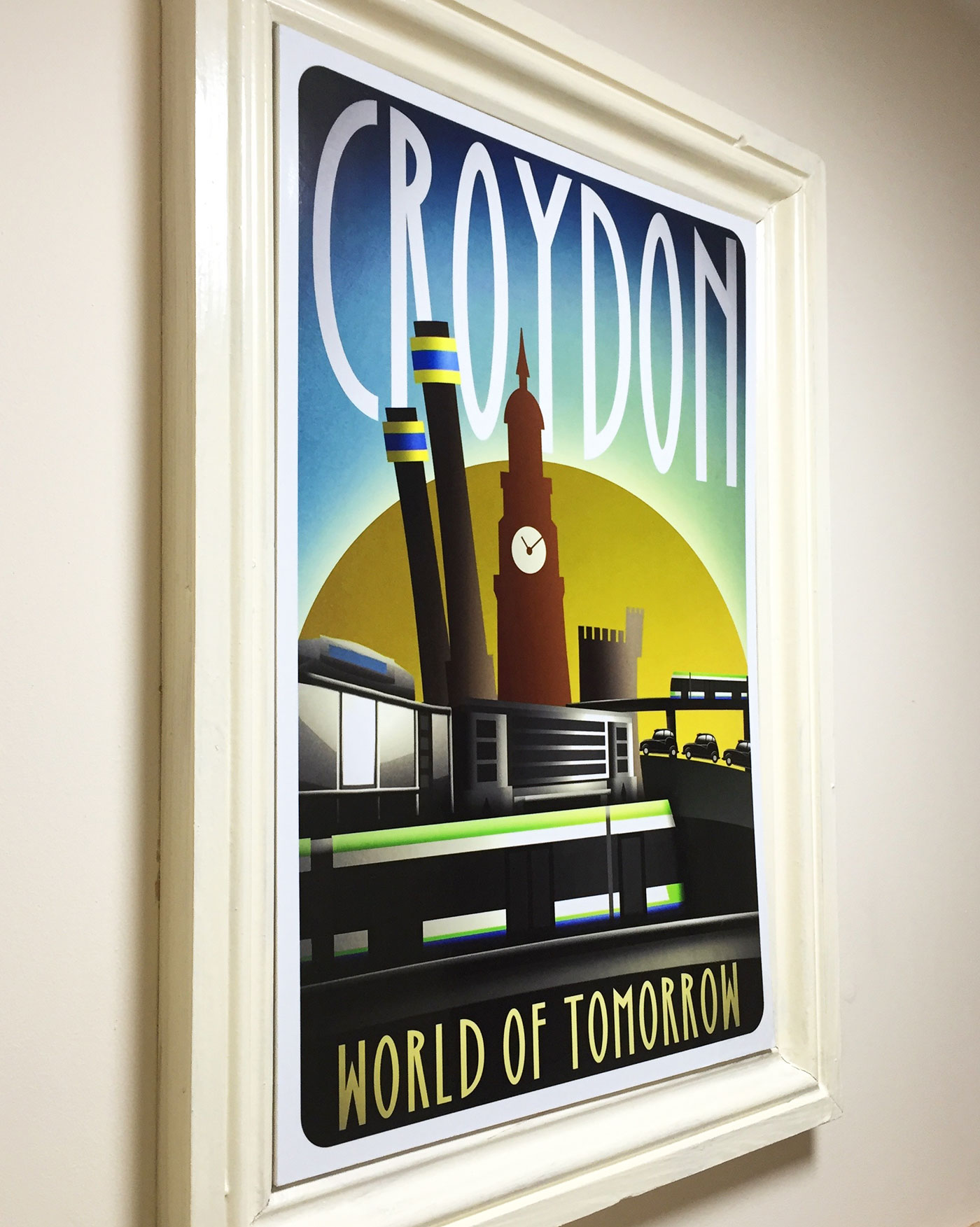 Croydonist: How did you come to create your sci-fi-esque style to depict our borough’s haunts?

Gavin: I was initially asked to come up with five posters – originally aimed as an affectionate lampooning of Croydon by presenting it as a 1950s holiday destination – to decorate the toilets at The Oval Tavern. Esther [The Oval’s landlady] and I soon bonded over our love of early 20th Century London Transport posters so we ran with this theme, largely as a loving satire by imposing vintage glamour to a town which – albeit unjustly – had a national reputation for the banal. At the time I was fascinated by the 1964 World’s Fair – with its gleaming and auspicious view of the future, as well as an obsession with Disneyland, so these were reflected in ‘Croydon: World of Tomorrow’ and ‘Croydonland’ respectively [shown in situ above and below]. 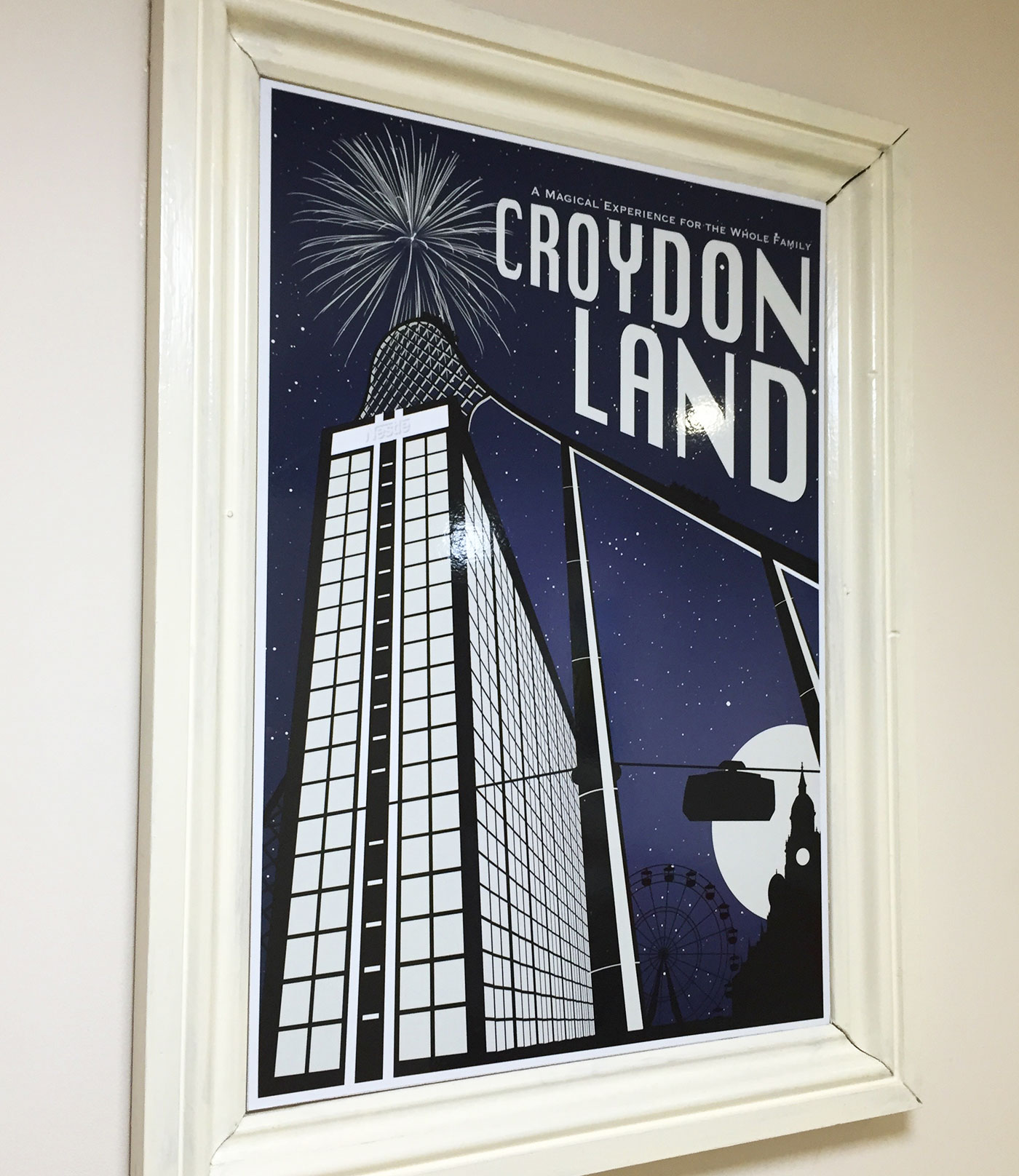 After the mild success of The Oval posters, I was asked by Jenny Lockyer to be the featured artist for one of her Number 59 nights, which combined food, live music and art in a living room. Rather than take the well-viewed toilet pictures to the gallery, I managed to pull together three new posters (I found some iPad graphics software that was half-price in the App Store so I could draw through the night). I was standing at the crossing outside the Quaker Halls one evening and looked over at Croydon Clocktower: it seemed to pierce the sky like a Jules Verne space rocket as it sliced through the sleek glass facade of Bernard Weatheril House. I took a photo and that night set to work. As time went on, everywhere I went I would see recurring space themes in Croydon’s brutalist architecture, particularly analogous to Stanley Kubrick’s sense of perspective and cold splendour. These pieces didn’t fit the vintage travel theme so I was convinced nobody would be interested and that the run of ten postcard sets I made for the event would be returned to my bag at the end of the night as I walked home with my tail between my legs. The three were ‘It Came From Croydon’, ‘Croydon: Lunar Research Project’ and ‘Park Hill’. A year and a half later, the lesson is to not be ruled by your fears. 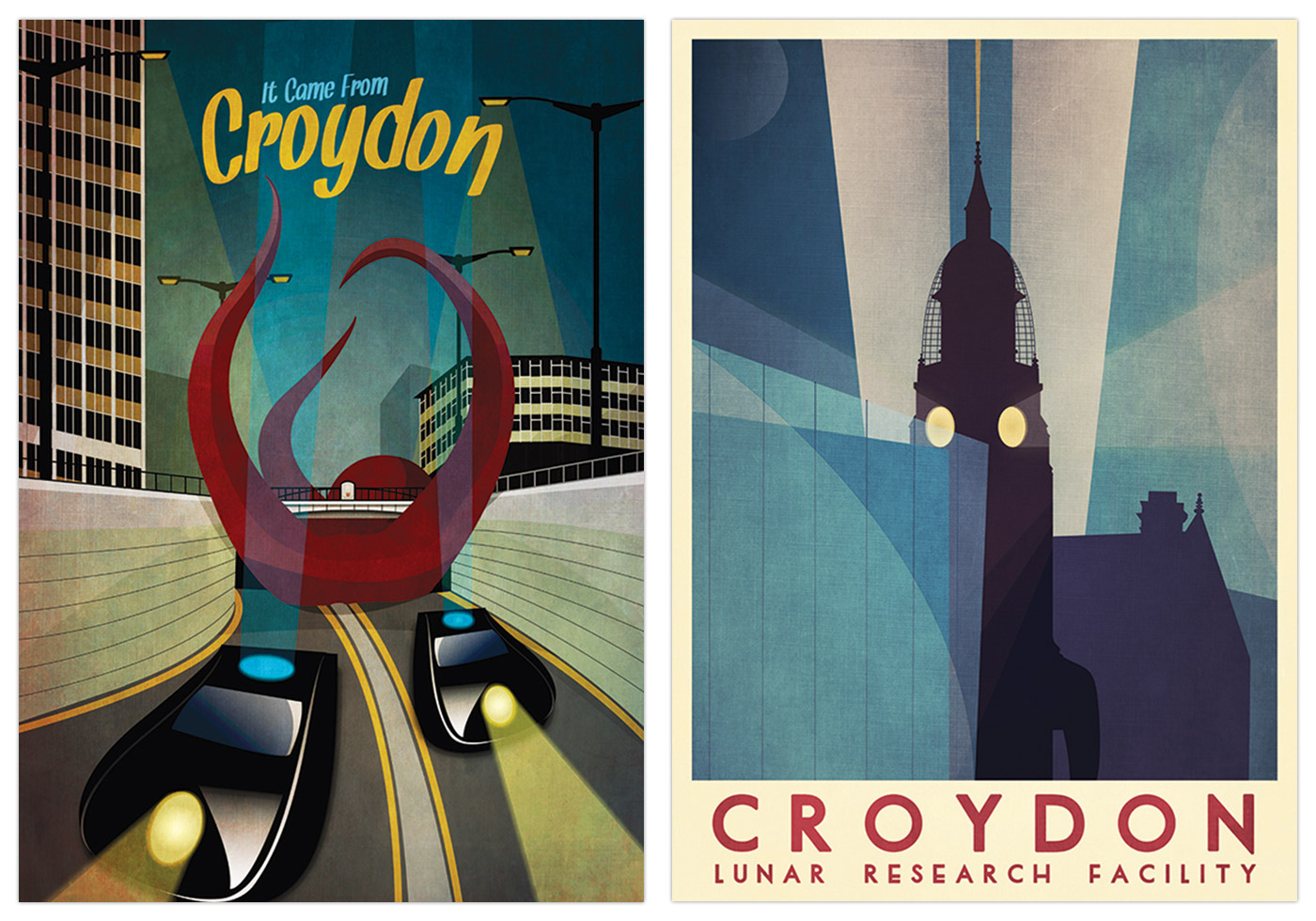 Croydonist: How long does each take you to create, and are you a digital or analogue creator?

Gavin: It really depends on how cool the idea is. A great idea will pull together really quickly but a confused or fragmented idea will keep leading you down dead-end streets before arriving at something reasonably cohesive. I’d say an average of two weeks from start to finish is normal, usually spread over a couple of hours every few nights with a bottle of wine and a space movie or two.

All of the drawing is done on the iPad and I move to my Mac for the text. Following the initial three pieces, I started coming up with more and more ideas as the iPad gave me the opportunity to work at any time; I often become anxious if I feel that I’m not doing something useful so I could now satisfy a creative need even when watching tv, on the plane, in bed, wherever. I don’t think it’s ever about what you use, it’s how it allows you to use it.

Croydonist: We’re getting deep now – do you see yourself as an artist or illustrator, or something else?

Croydonist: Good term – we may have to ‘borrow’ that one. 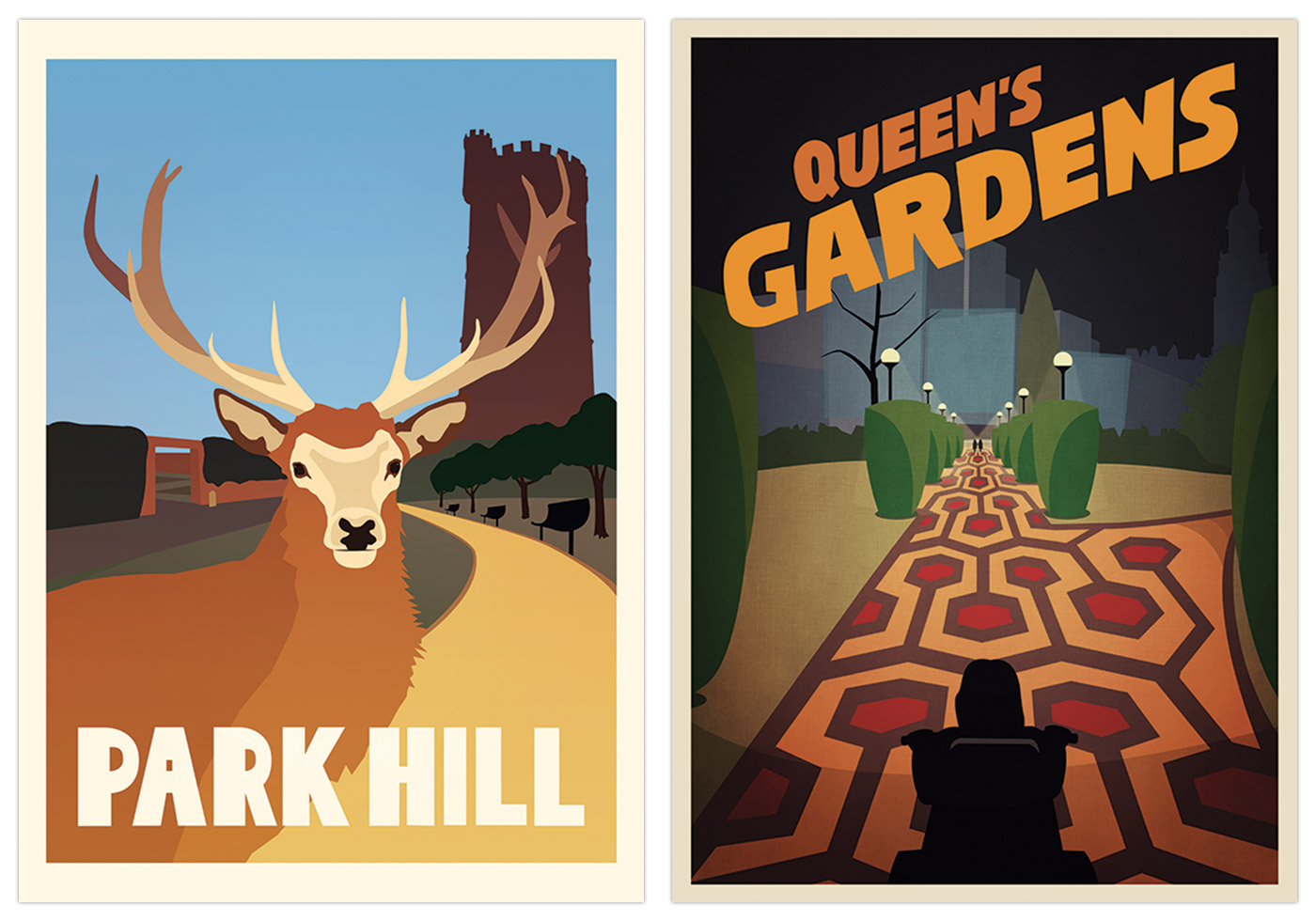 Croydonist: If we had to choose our fav piece of your work it would be a toss up between ‘Park Hill’ and ‘It Came From Croydon’ – no wait we love Croydonland too. Do you have a favourite and why?

Gavin: That’s a tough one – if it’s your own work then the connection is more about how you felt when you made it rather than a view of the finished outcome. If I were to choose a current favourite, it would probably be the cover for The Croydon Citizen earlier this year; I love building electronics so I got the chance to combine two passions. 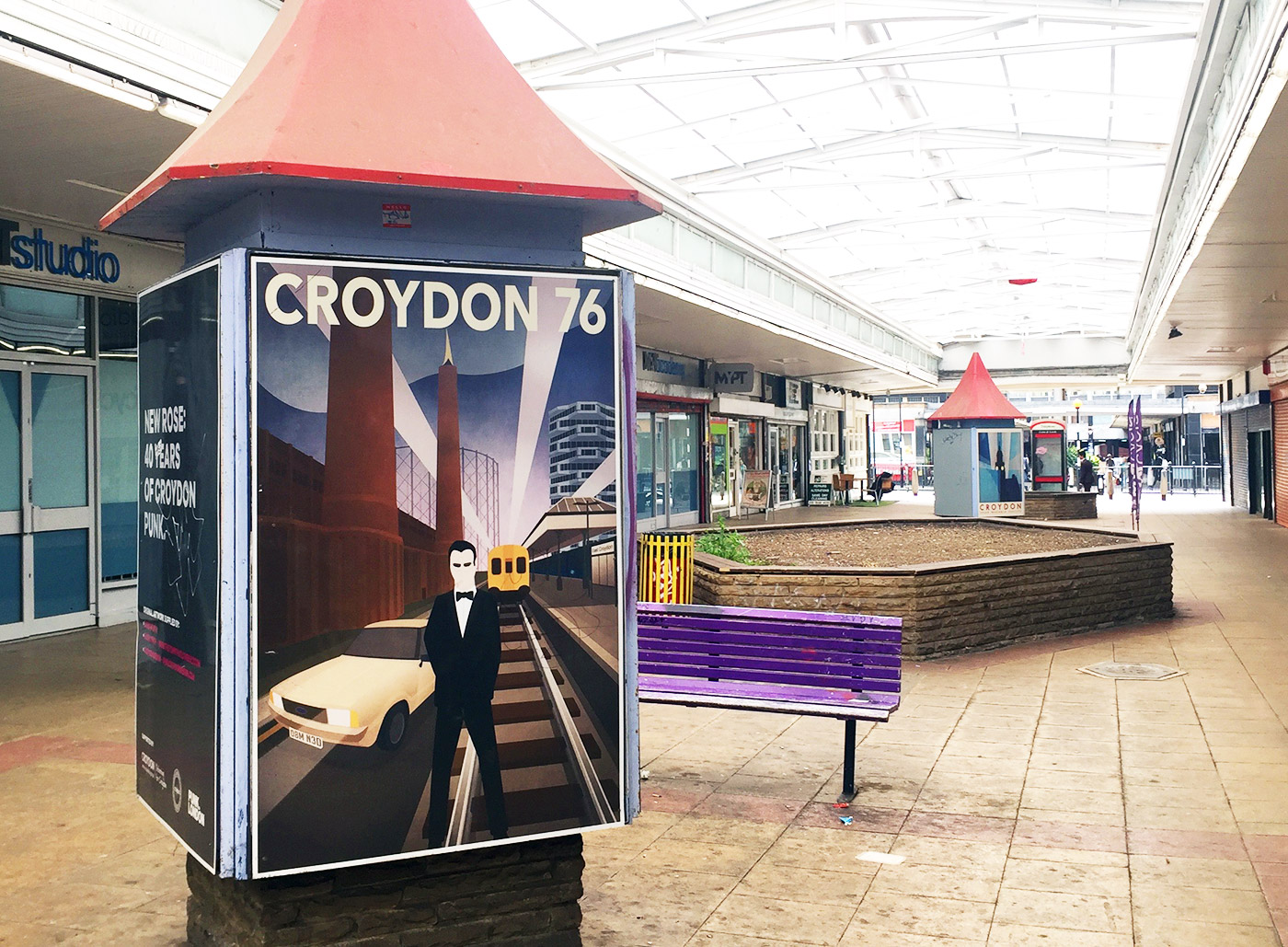 Croydonist: Your St George’s Walk work was commissioned to celebrate 40 years of punk last October. Can you tell us more about the project?

Gavin: I got a call from John Bownas at Croydon Council who, alongside Paula Murray, was conceiving a project to commemorate 40 years since the release of The Damned’s ‘New Rose’ – considered by many to be the first punk single – as well as celebrating the vital role The Greyhound played in galvanising the exploding scene at the time. I suggested he call Jamie Reid but I ended up with the gig, so I set about creating five big pieces featuring the band in a fantasy Croydon of 1976. I’ve toured across the world playing in punk bands like Snuff, Wonk Unit, jammed with Black Flag and even played keys for The Damned’s Captain Sensible, so I felt a sense of completion to be involved. 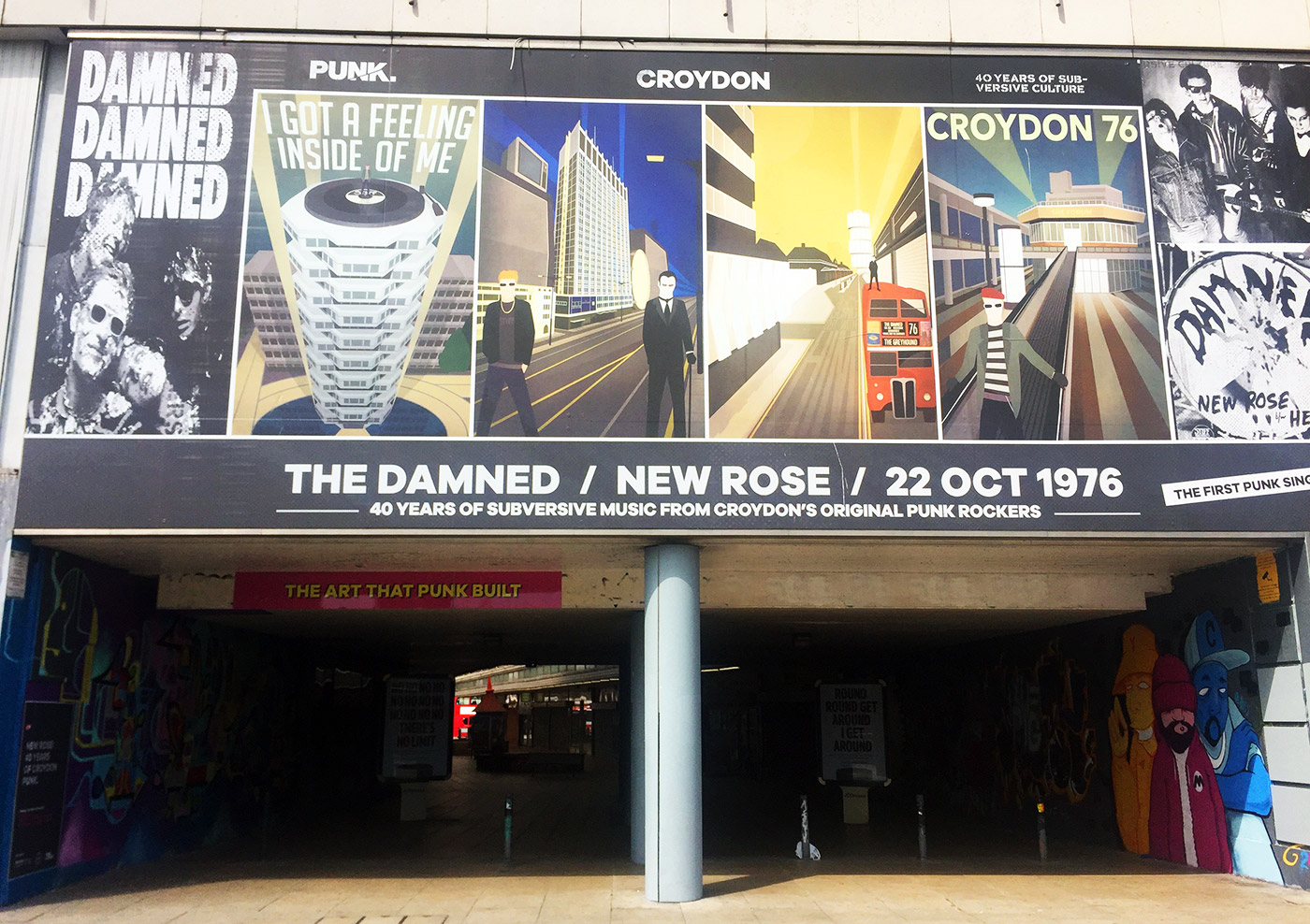 Croydonist: What’s been your quirkiest commission?

Gavin: I’ve worked a number of times for the police and the council, so anybody with a spaceship or kraken on their wall may be surprised to learn that it’s me telling them to guard their mobile phones or not to drink too much when they’re out on a Friday night.

Gavin: I have a folder full of half-completed, funny ideas – normally dreamed up in bed, so I’d like to see some of them find their way into people’s living rooms one day. I wanted to do Croydon Airport for ages but had no way in – you can’t satirise something that’s globally significant – until I was asked to create a piece for a play about pioneering aviator Amy Johnson, so I’m happy now.

Croydonist: What’s next for you and Croydon?

Gavin: I’m assuming Mayor; if not, a bronze statue would be fine? 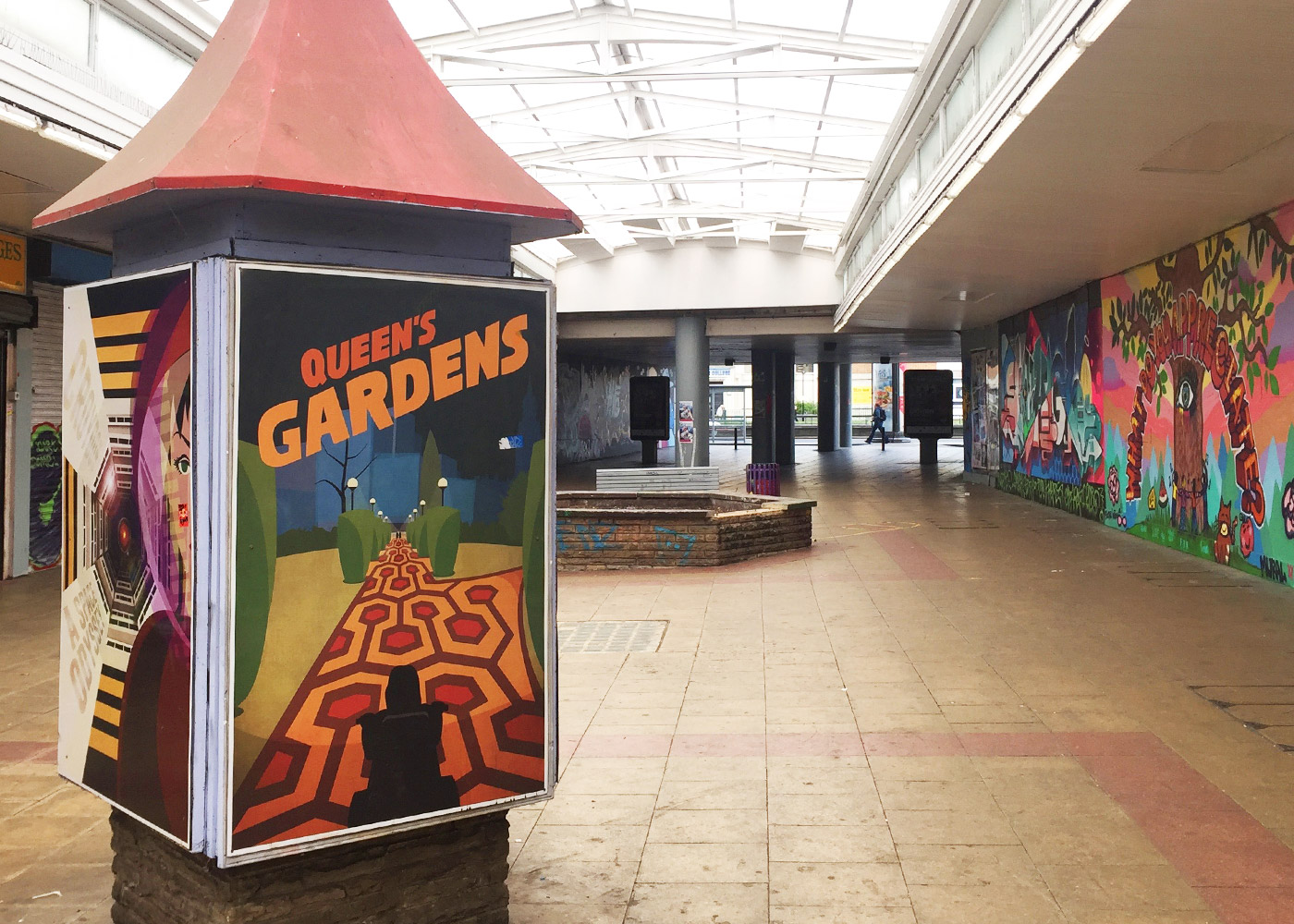 Croydonist: A drink in the Dog and Bull, Matthew’s Yard, The Oval, the Spread Eagle or Boxpark?
Gavin: They’re all fine joints but The Oval is where my heart lies. Bishops, however, is a rare fruit indeed.

Croydonist: A wander round a gallery – Turf, Descart.es, Click Clock Gallery or RISE?
Gavin: I’ll trade that for an afternoon wandering around Croydon charity shops. Top of the pack is the one next to the Buddhist Centre.

Croydonist: A walk in Lloyd Park, Wandle Park, South Norwood Country Park or Park Hill?
Gavin: At a loose end on a sunny afternoon I actually decided to walk to – and picnic in – as many Croydon parks and green spaces as I could, whilst documenting my adventure online. Starting at Waddon Ponds, I think I managed Wandle Park, Park Hill, Lloyd Park, Addington Hills, Heathfield and Coombe Gardens. Both Coombe Gardens and Park Hill are very special to me.

Croydonist: Shopping on Surrey Street, Purley Way, Whitgift or Crystal Palace Triangle?
Gavin: Surrey Street. Although I can spend hours in TK Maxx on Purley Way and not leave with anything, and people-watching in The Whitgift Centre is fantastic.

Thank you to Gavin for chatting to the Croydonist. You can check out more of his work here.

Images by the Croydonist and courtesy of Gavin Kinch