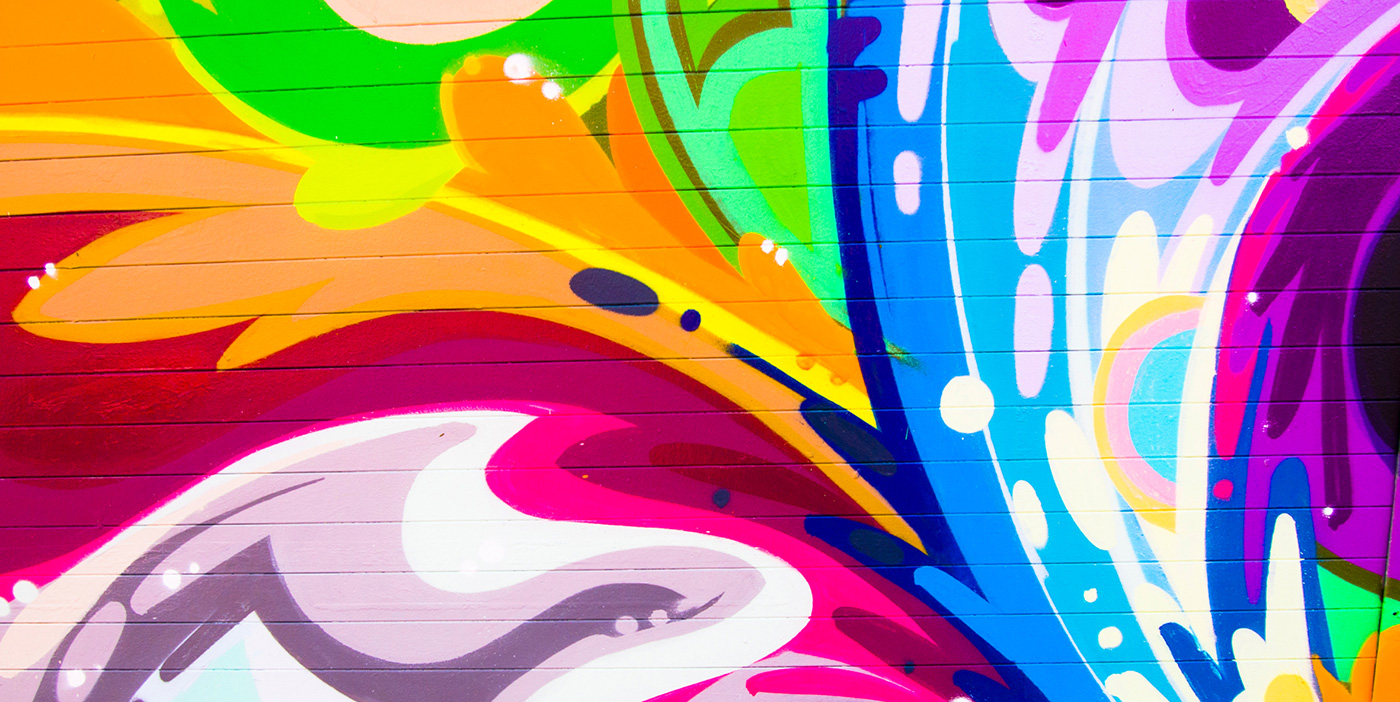 Characterised by his colourful undulating and free-flowing patterns, Morgan Davy is a prolific, full-time, spraypaint artist from Croydon who got into graffiti in early 2002. These days his improvisational street art can be seen not only all over the UK, but increasingly in key cultural cities worldwide, including his recent residency in Lebanon as part of RISE Gallery’s culture exchange. Let’s speak to the man… 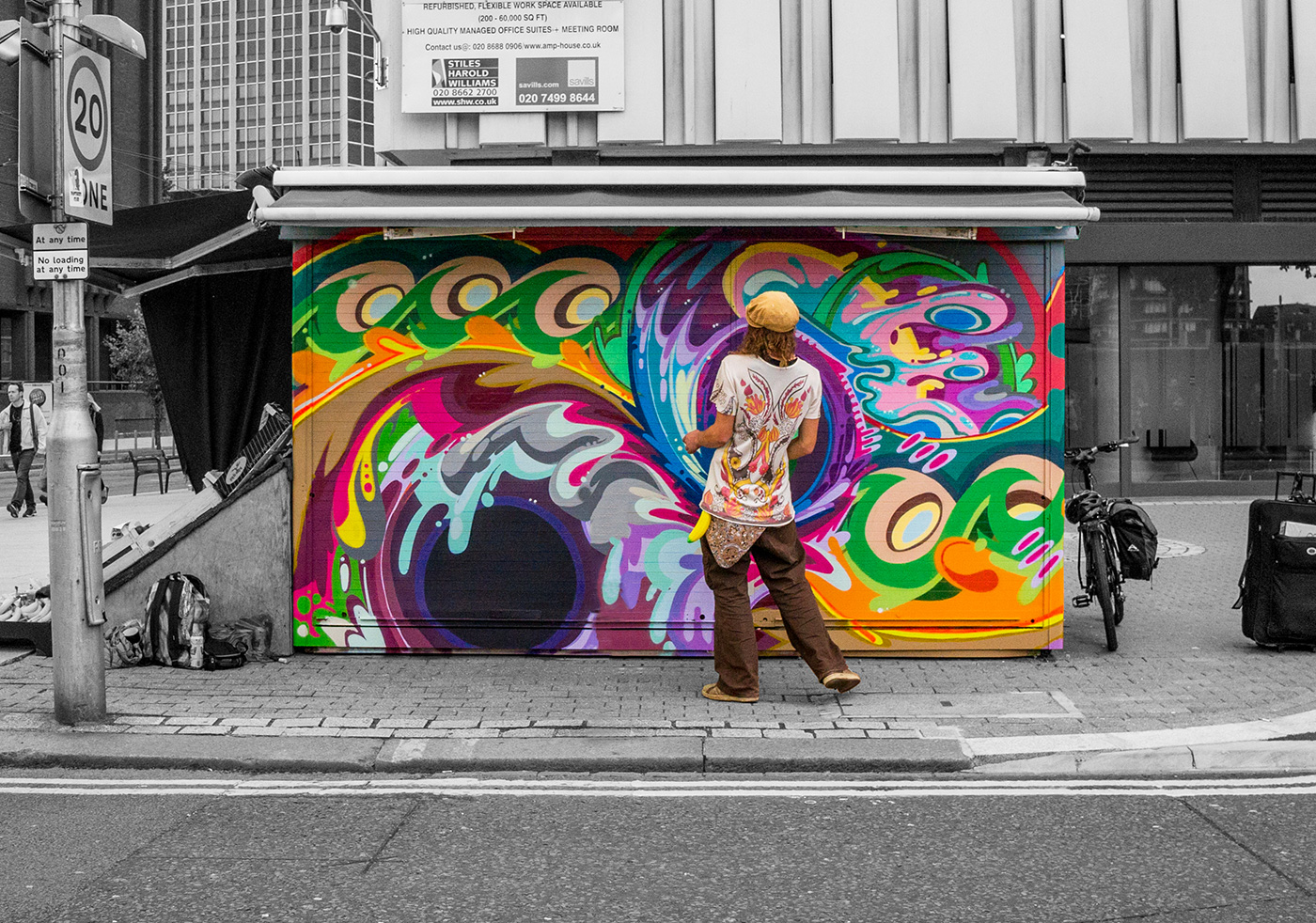 Croydonist: First of all, did you grow up in Croydon, and what part of the borough do you call home?

Morgan: I grew up in leafy old Warlingham, which has been ideal to equalise both urban and rural environmental balances suiting my wellbeing, plus I love the contrasting extremes of both words. Croydon has basically been my closest city,stomping ground, and meeting point to then venture. Home to me has always been where the art is, or wherever I lay my hat so to speak. If I’m far from ‘Home’, sometimes I’m prepared to sleep next to my art in the street just to get the work complete, and to also safeguard it from getting destroyed by local bombers etc.

Croydonist: How did you become a spraypaint artist?

Morgan: The influence of 90’s hip hop got me started as an early teen, and all the appealing elements built up around that culture. The first spraypaint I bought was from the FDC graffiti writer SER when he had a supply shop in Croydon’s in-shop. In those days I was a rep for Fairfield Halls skate, break and graff crew, FM. In the evenings lots of the Fairfield Massive would hang out out the Black Sheep Bar at a night called the Bangers hosted by Oliver Sudden. Here we had an open platform to come together and practise our element, be it the Art of Rapping, Breakdancing, Graffiti or Turntableism, it was all relevant to the arts in the street. I first started writing my name back in 2002, but the transition from painting letters to street art today was psy-decorating walls inside derelict buildings for the squat party scene and underground DIY cultures. It was here where I felt liberated enough to explore and discover my style independently free from any anxiety or pressures painting with territorial gangs or getting jumped by the old bill! 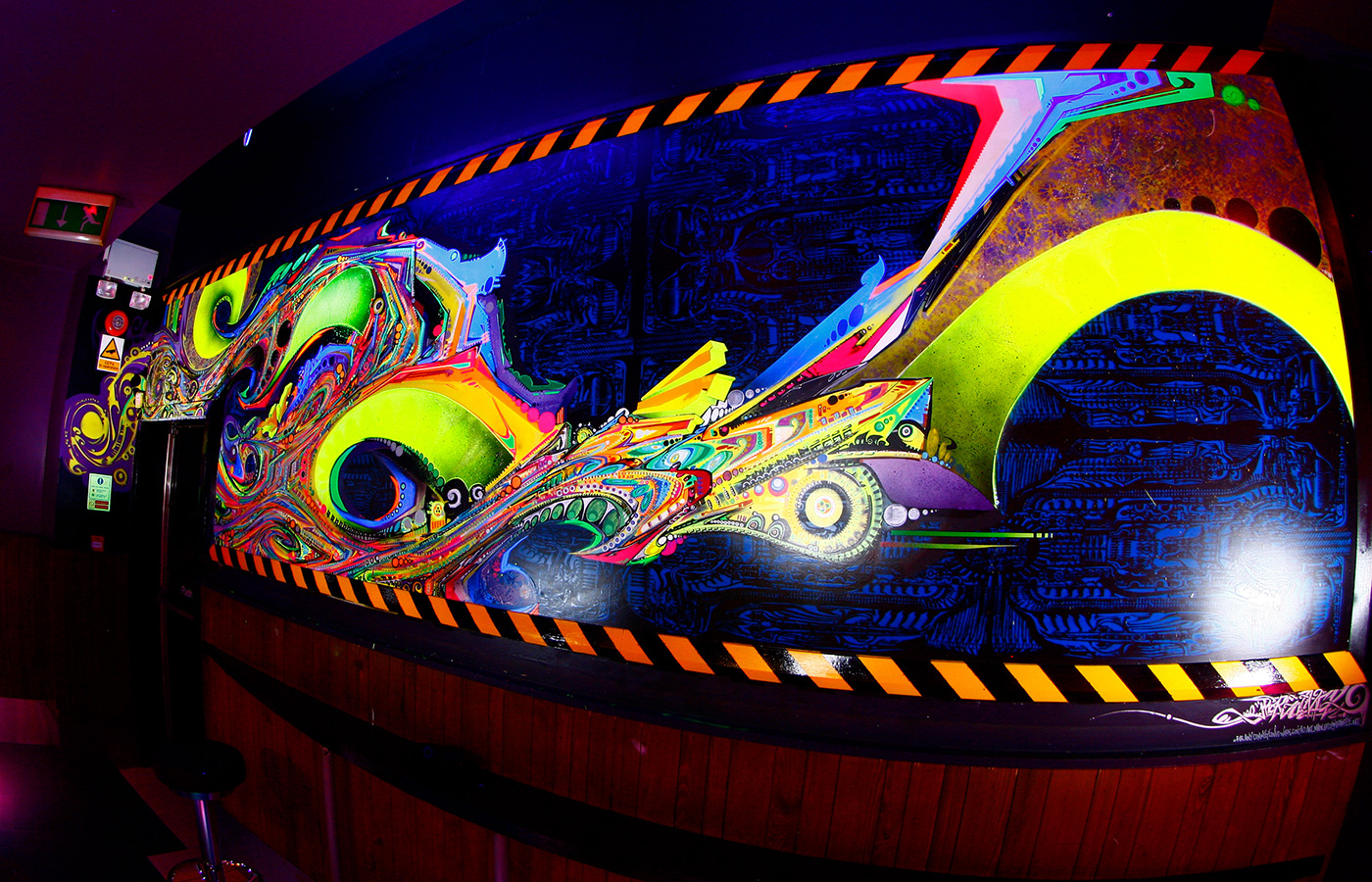 Croydonist: How do you approach a blank wall?

Morgan: My modus operandi is an honest improvised fashion, I freestyle within the momentum of the moment, and never from sketch. I enjoy a good paint jam and collaborational piece too!

Morgan: I use these aliases to portray a vast range of explorational mediums such as music, film, styling, illustration, performance, conceptual, sculpture & various printmaking studies.

Croydonist: You often work with other artists – do you think collaborations are important?

Morgan: I picture it like this; you wouldn’t go to see a live band witnessing all musicians play in separate rooms, you’re there to hear them resonating as a whole piece playing together in unison! Apart from the matter that it keeps things fresh, there is nothing worse than arriving at a paint jam to find out everyone is painting separately, but next to one another on the same wall without mixing things up. 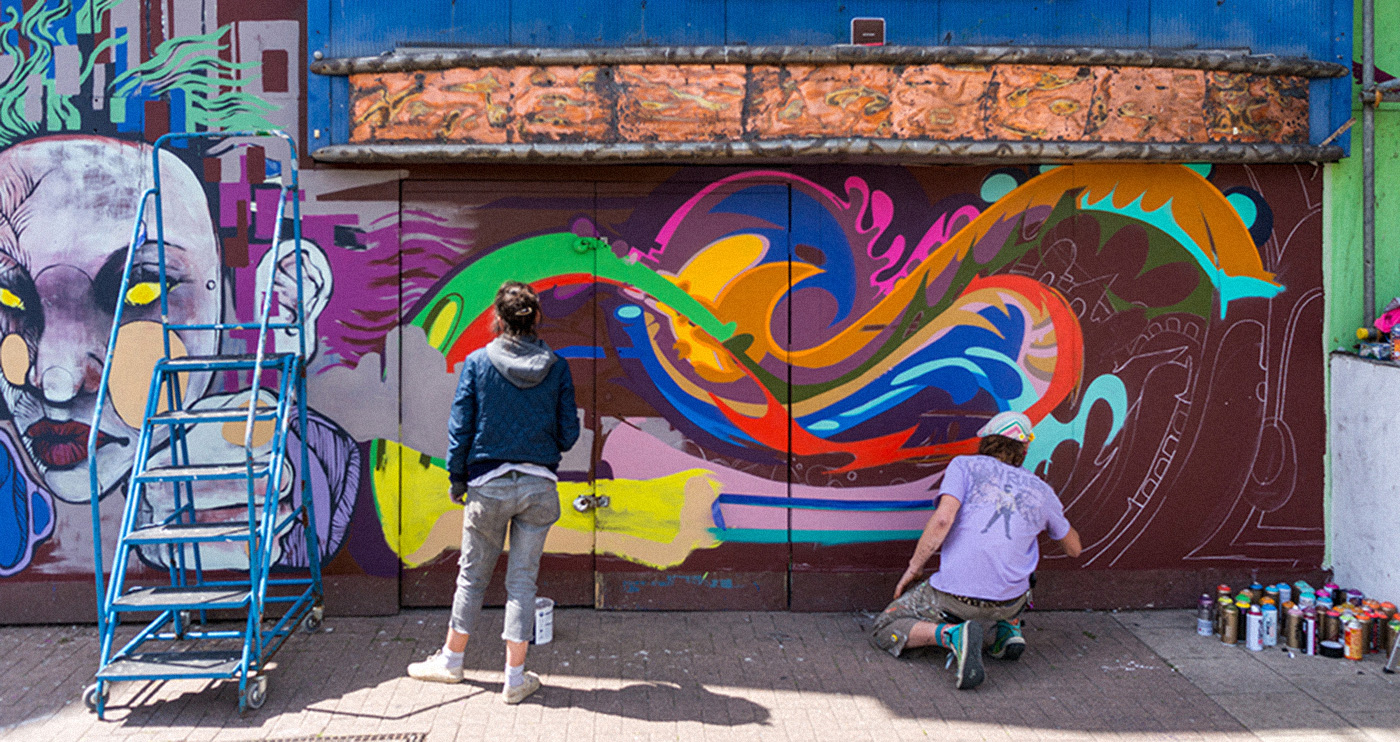 Croydonist: Are you currently part of any crews?

Morgan: Yes and no – these days I’m more in support of the collectives – Minesweeper Collective, Subpattern_LDN, and Temporary Autonomous Artists.

Croydonist: Where can our readers see some of your work locally?

Morgan: One of my latest pieces can be seen in a new venue called ‘Bar Bella’ in Crystal Palace. I will also be curating monthly shows here for exhibiting artists, musicians and performance artists. But I think you can still see the Subpattern_LDN production work down in Exchange Square, and I have some works in the #SprayExhibition20 street art takeover organised by Londoncalling blog all around Penge. 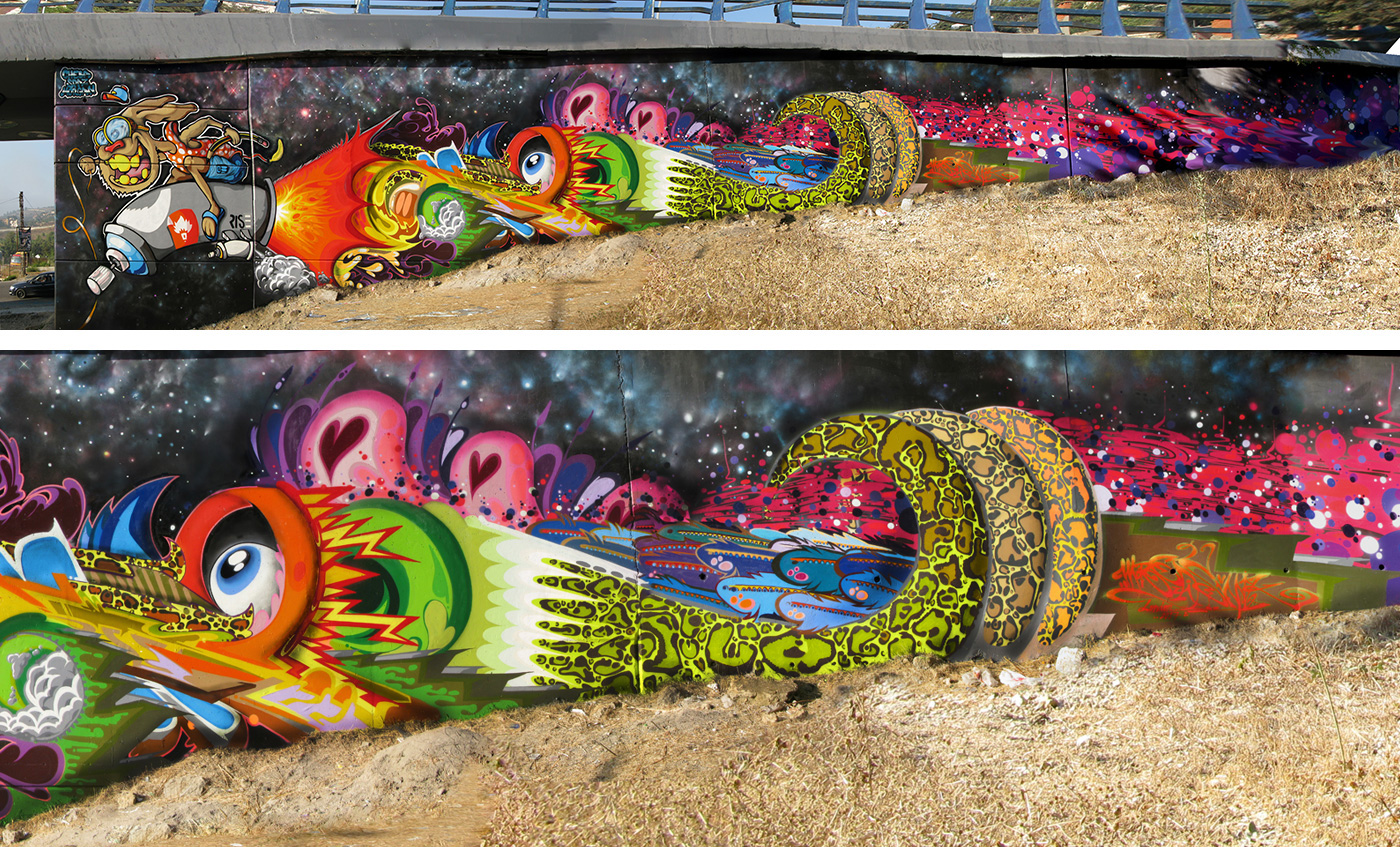 Croydonist: What was it like painting in Lebanon on RISE Gallery’s cultural exchange?

Morgan: Eye opening, groundbreaking and potentially life-changing, and I’m confident in saying I speak for all on this! Here in London we take for granted the abundance of culture that we have access to, and unfortunately miss a lot of it half the time. Give a slice of that cake to an underprivileged area and they shall cherish its real worth with longevity and inspiration.

Croydonist: Street art connoisseurs recognise your art straight away even without a signature  – how would you define your style (so our readers can look out for your work)?

Morgan: I have a distinctive use of colour palette, and a refined signature style – namely abstract qualities which are customarily tailored to exotic technicolored wave-like explosion, undulating in shape and form. ‘Neo-nouveau’, ‘Psy fi- delic’?! I don’t know! It just IS.

Croydonist: We know through your work you want to make art more inclusive, free and publicly accessible to wider audiences. Why is this important to you?

Morgan: I want my work to be a unique and personal experience to the viewer, stimulating new waves of thought patterns & imagination, inviting them to look within and awaken an inner depth of dormant senses, whilst breaking down conditioning and preconceived notions the viewer may have along the way. There is often a dull lack of honest creativity and colour usage in society’s day-to-day capital, so I am attempting to restore the imbalances by decorating urban grey matter with my rosy glow of positive colour vitality and free-flowing pattern undulation.

Croydonist: You have been an incredibly busy man, so far this year, having already painted at five festivals including Nomadic Gardens’ International Meeting Of Styles, exhibited at four exhibitions (two of which you curated), and painted for clients such as Sony, Swatch, Amy Winehouse Foundation, Lords Of The Underground, and Studio Valhalla. Where are you going to be painting next?

Morgan: I’ll be painting in Ibiza next week, then at Katharine House opposite Croydon library for The Next Croydon Facelift (5-12 September) organised by RISE Gallery.

Croydonist: We’d like to end with a quote by Nick Razzo, as we love how he describes your mural commissioned by the Black Sheep Bar:

“Like a sort of hypnagogic supernova all mixed up with Francis Bacon
and the brain scans of someone enjoying an orgasm.
At one point it seems like a sea of rare chemicals on a distant planet,
at another it resembles a monstrous bird.

The attention to detail is awesome,
ensuring that if you are examining it from three inches away or 10 feet,
you get a mighty jolt of aesthetic pleasure!
If this nature of art was a genre of music,
it could be found under a ‘psychedelic surf-funk’ section!”

We wish we’d seen it for real! 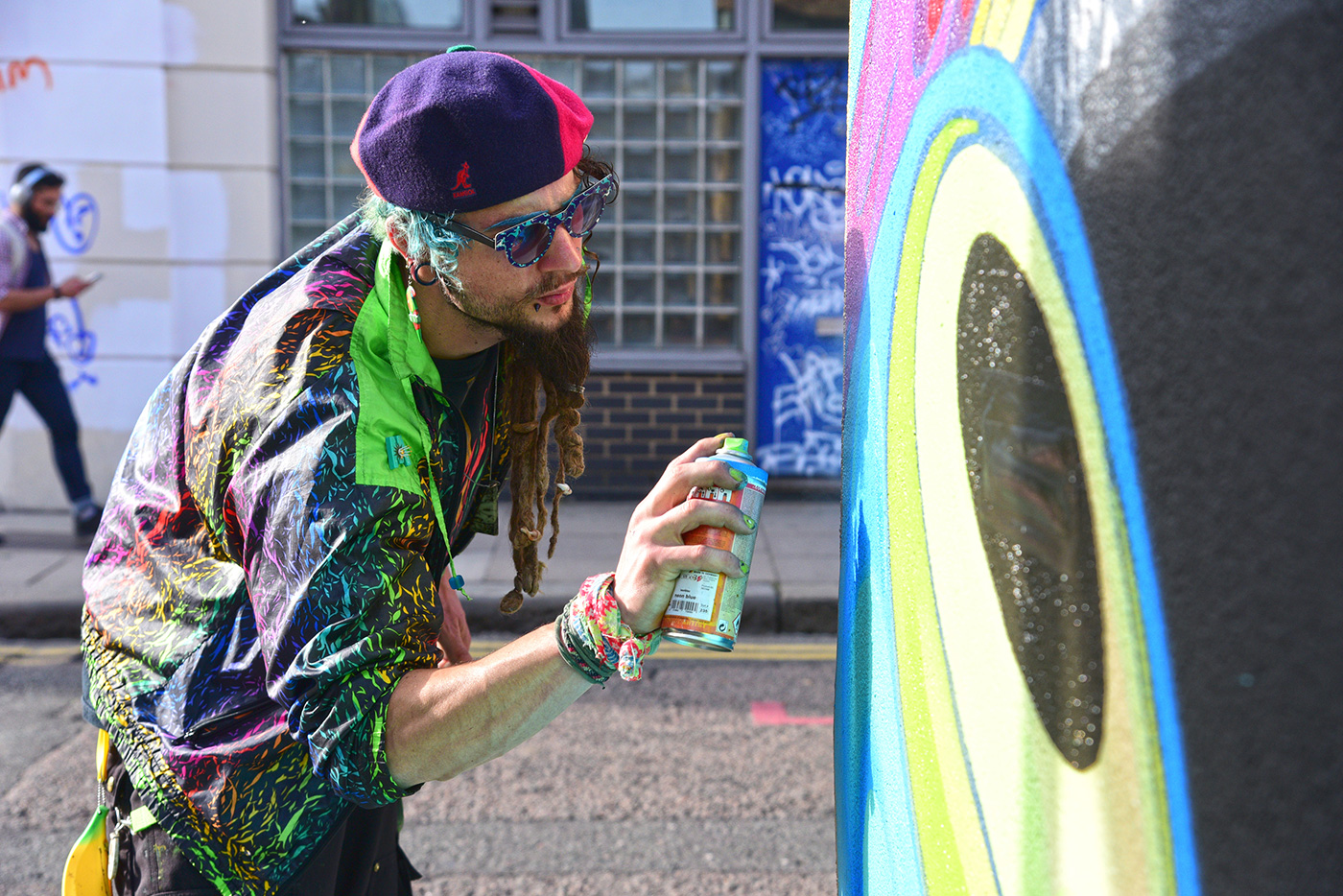 We look forward to more of your art hitting the Croydon streets in September – if you can’t wait until then, check out Morgan’s Behance and Instagram pages.

Big thanks to Morgan for chatting to the Croydonist.