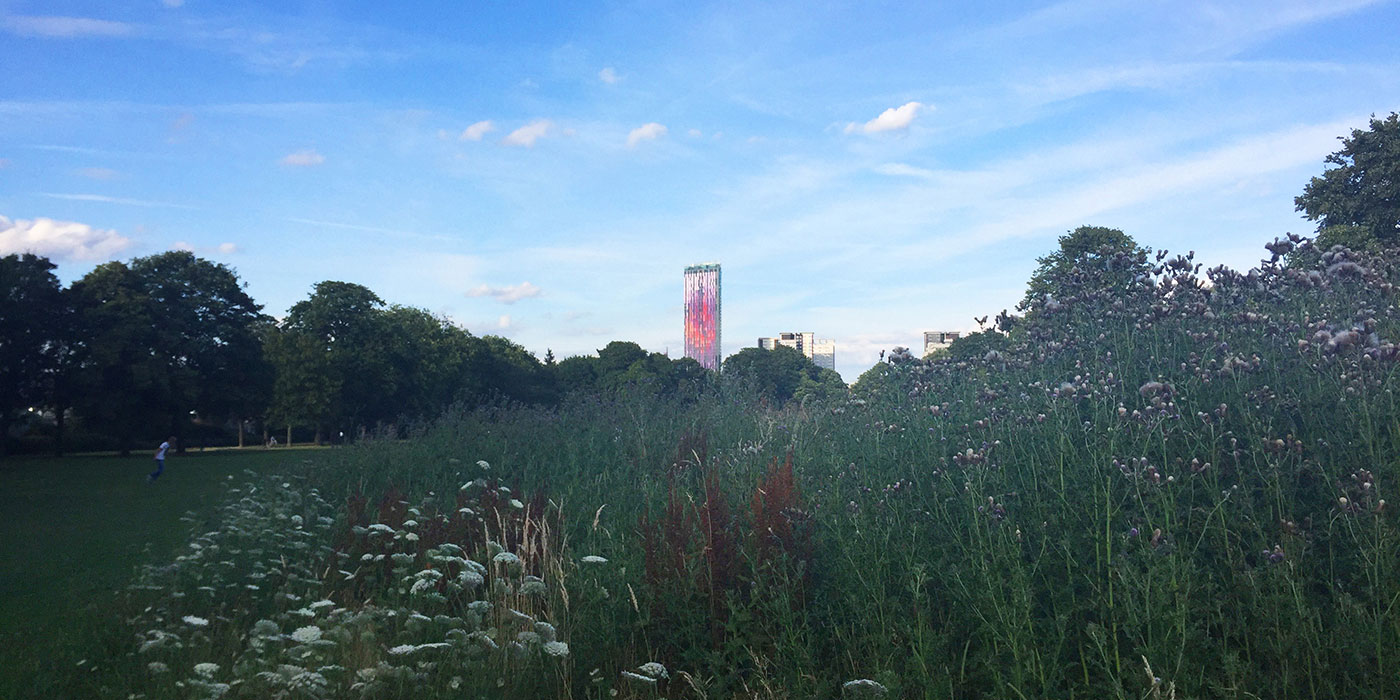 This summer I’ve rediscovered Wandle Park. I have vague memories of being dragged round its rather grotty grassy expanse by my parents in my tweenage years, before hitting the infinitely more exciting Whitgift Centre shops (my dad making use of the long-gone free parking under the flyover nearby).

I had no idea until I arrived at the park for one of the heritage walking tours back in June that it had been completely transformed. 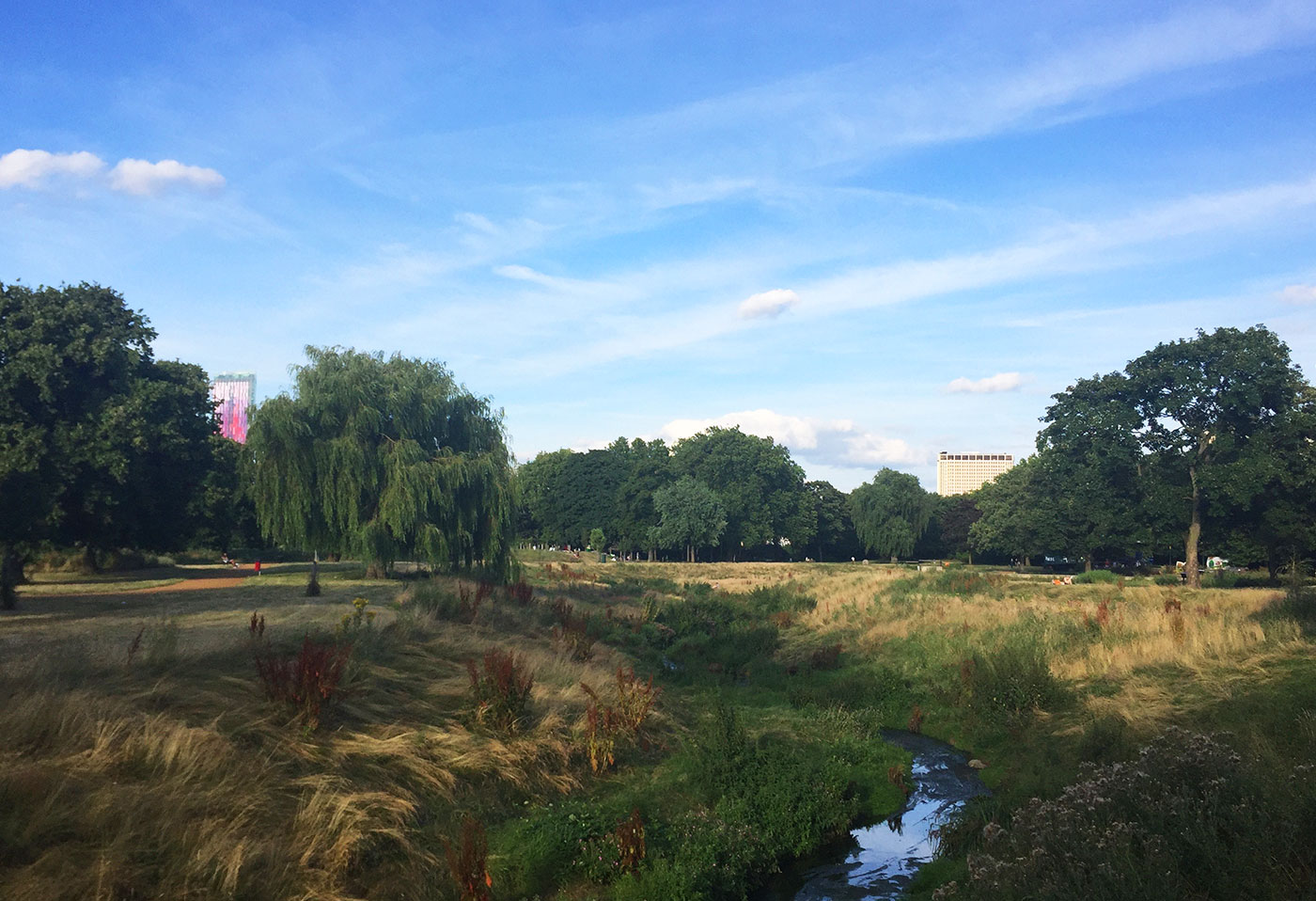 The area has been a park since the 1890s, and from all accounts it was a very fine Victorian one, complete with promenade, bandstand, island and boating lake with the River Wandle winding through it (the lake being used as an ice-rink by the winters of the 1930s).

In the late 60s the river was diverted underground and the lake (by then dried up) grassed over. So as a spotty 12-year old, I was completely unaware of how the park used to be.

The park’s transformation all happened unbeknownst to me between 2012 and 2013. The River Wandle has been brought back above ground where it belongs, and even a portion of the boating lake has been recreated, making a very fine pond and wildlife area, with a new bandstand nearby. 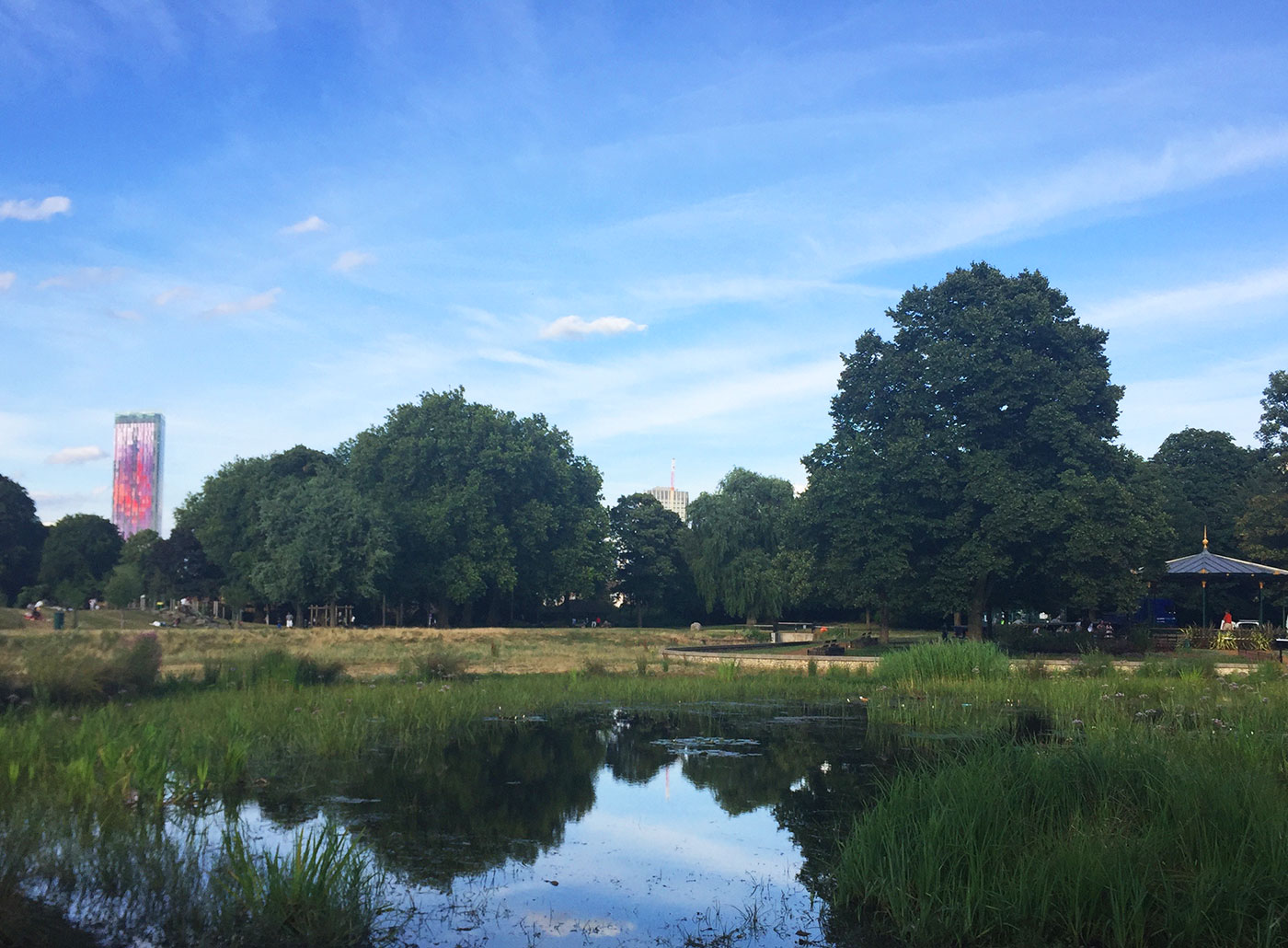 You can imagine my wonder when I entered the park to find this pretty picture of a bygone pleasure ground waiting to be explored. The park isn’t just a homage to the past, but has some fantastic modern amenities – a great café (open 7 days a week), a play area I would only been able to dream of aged 8, a trim trail for the grown-ups, sports courts, an updated skatepark (home to Croydon Concrete Collective), and a community garden (join the garden sessions on sunday mornings). 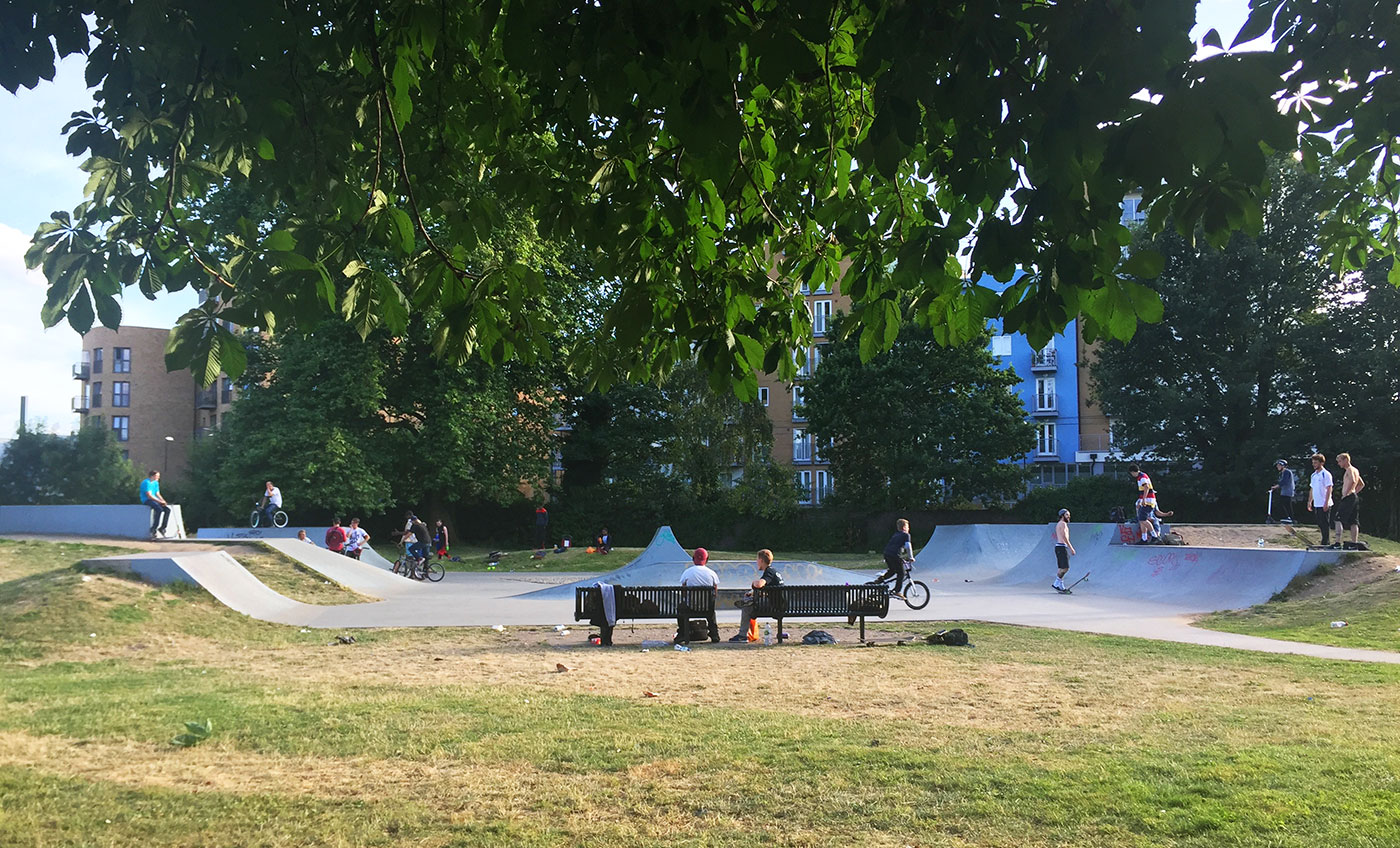 Wandle Park has become so much more than a park – it is the hub of a diverse and growing cultural programme. The café is the starting point for free guided walks which take place through the spring, summer and autumn months (so far I’ve been on the skyscrapers tour, and the wander down the Wandle – both excellent in completely different ways, and I have November 5th earmarked in my diary for Richard Neville’s infamous evening ghost walk).

The bandstand is now home to a variety of events – open-air theatre and cinema included. Much Ado About Nothing is coming this week, and there are film nights next month. And if contemporary art’s your thing, Turf Projects have an off-site poster project exhibited in the park. It’s worth keeping an eye on the park’s facebook page for upcoming activities, plus there is a handy leaflet you can pick up in the café. Did I mention there’s ping pong too? 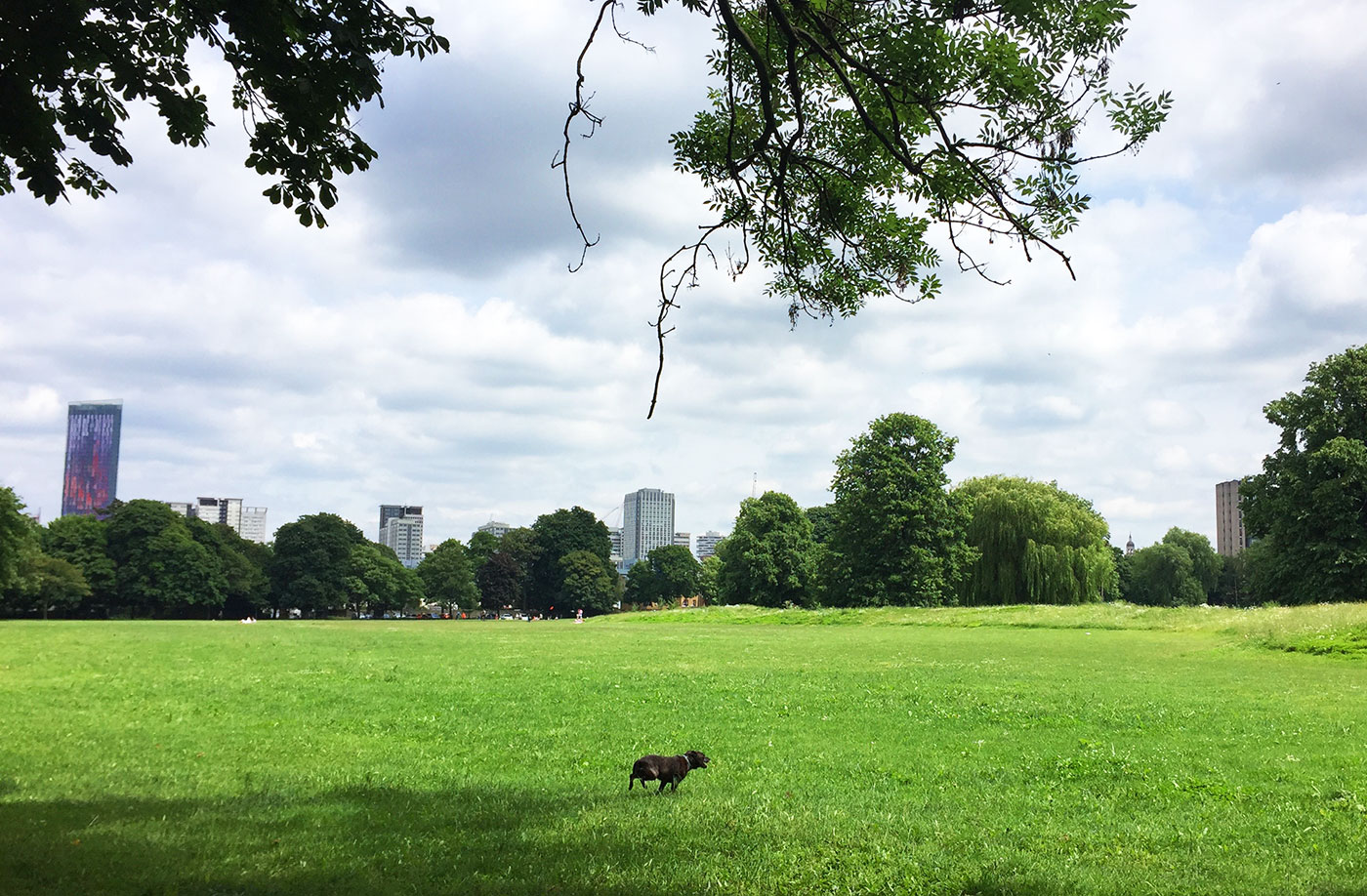 Wandle park is a wonderfully unexpected haven on the edge of the Purley Way, with its own tram stop (of the same name) only three stops from East Croydon station. It is fast becoming one of our regular haunts, especially as Lilly the dog enjoys a good run around the grassy meadow there.