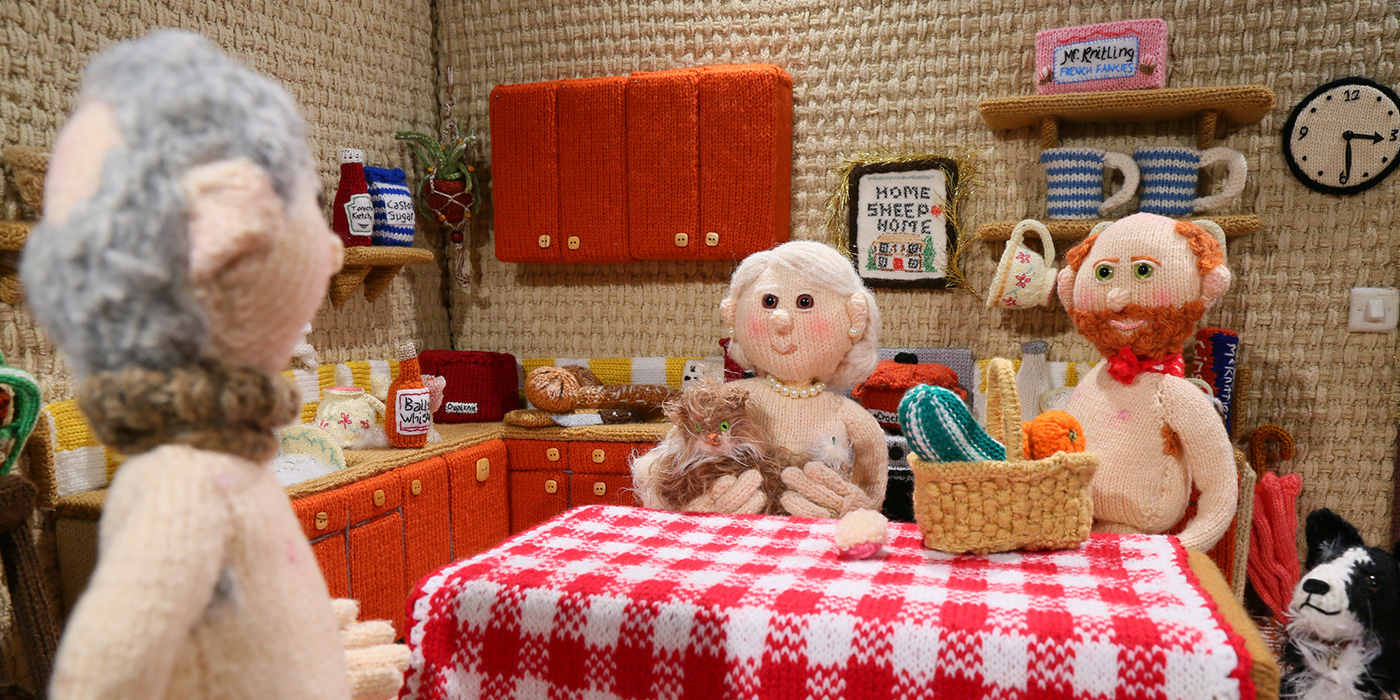 I didn’t realise until recently that tucked behind Factory Lane and a stone’s throw from Ikea, there are over a hundred studios for creatives in a development called Art House Studios in Grafton Quarter. Some of the artists and makers we were already familiar with, from urban sketcher Lis Watkins and one half of Scene In Croydon duo, Samantha Warren to two of our 2020 social media header artists, Bislacchi, and Eleanor Suess, but there is a diverse collection of talent working in this creative hub we hadn’t yet crossed paths with, including a stop-motion animation company with the wonderful name Woolly Vision.

When I heard about Woolly Vision I was rather excited, as I am a bit of a fan of stop-motion animation with a love of all things created by Nick Park (Shaun the Sheep being my favourite). Run by animator Ed Hartwell and writer and designer Sarah Simi, Woolly Vision’s award-winning animations, all created from wool, fabric or felt, have a retro charm about them with modern twists, and you’ll easily lose yourselves in the humour of their adults’ and children’s series’ alike. If you’re looking for a bit of escapism, I’d definitely recommend. We spoke to Sarah and Ed to find out more about their woolly workings. 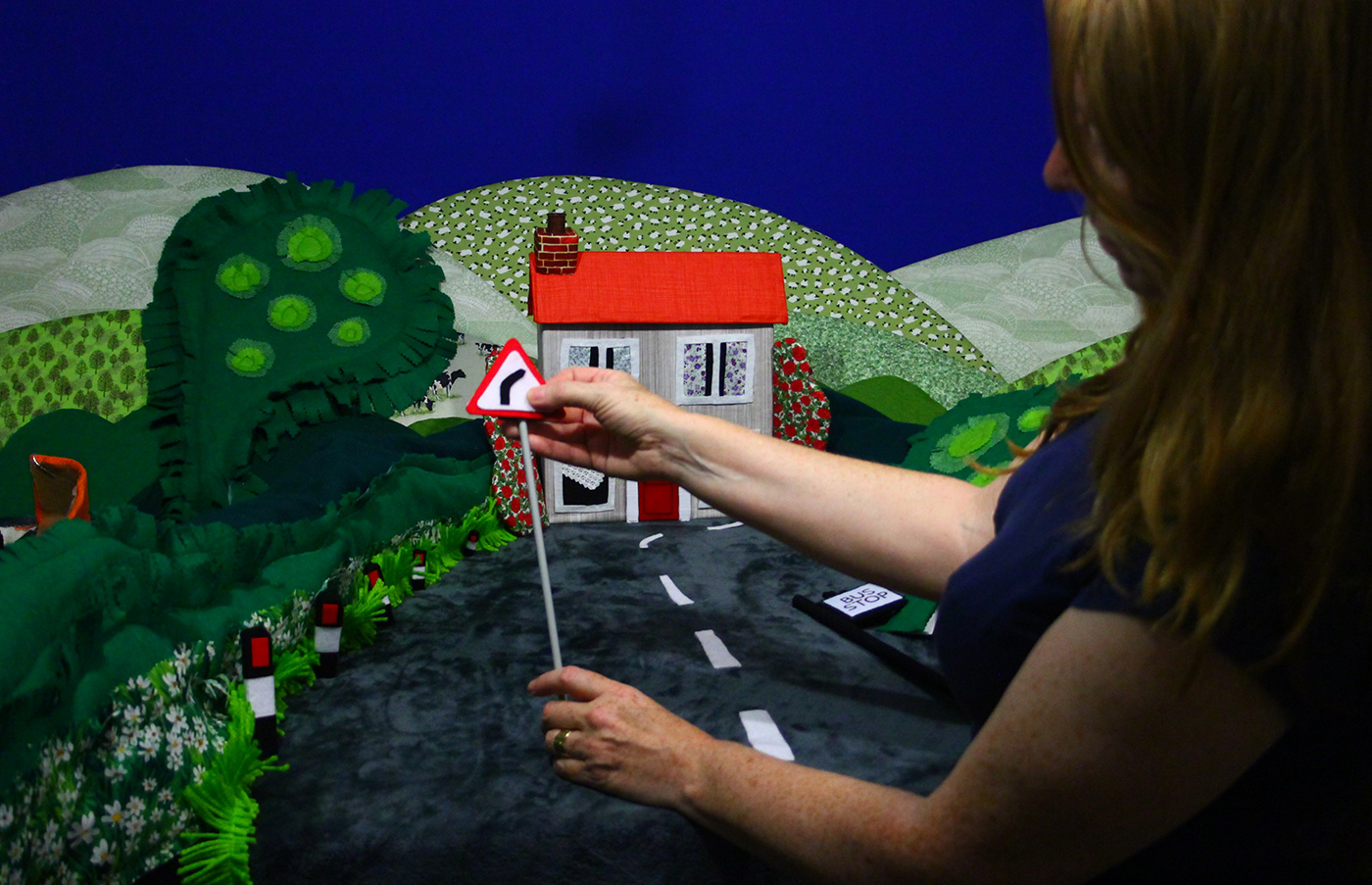 Croydonist: How long has Woolly Vision been based in Croydon?

Sarah: We have been in our studio here in Croydon for just over a year.

Croydonist: What area do you call home?

Sarah: I live way out in Kent now but am a Londoner at heart and an Essex girl by birth.

Croydonist: How did Woolly Vision come about?

Sarah: I came up with the idea of the characters of nudinits and thought they’d make a great animation. I found Ed who was already working as an animator and we made a pilot episode together. We entered a few film festivals, won a couple of awards and realised we were doing something right! nudinits became more successful, we made more films together and we started having lots of ideas for other projects so we decided to set up Woolly Vision together a few years ago.

Croydonist: What are your backgrounds?

Sarah: I was a writer and designer in various capacities and used to act a bit.

Ed: I have always been an animator and puppeteer. I studied Media Technology and Production at university and then set up my own business doing 2D motion graphics while making puppet films on the side. I then directed music videos and adverts and worked in the production of some TV and Film projects. I then set up my own stop-motion studio.

Croydonist: You create animations for adults and animations for children. You must need to get into very different mindsets for these two audiences. Is there one type you enjoy more?

Sarah: I probably prefer making the adult stuff but the process for me is the same regardless – you want to tell a story, for it to look great and I always like to make the audience laugh too.

Ed: Children’s films are like any other film, but just happen to be suitable for kids. We often look at the things we liked as kids as a starting point for both adult and kids content. nudinits has a lot of style references to the Trumptonshire series, and the knitted puppets are partly inspired by Clangers. I have always watched a lot of kids animation, initially as a child, then for working in TV and now I watch it with my daughter. The popular stuff is always entertaining for adults to watch as well as the kids, so the only real difference with making the adult content is that the jokes are ruder. The kids’ content doesn’t always have to be relentlessly funny to be engaging but we do always put visual jokes in to make kids laugh.

The animated nursery rhymes (Little Woolly Vision) involve a lot of songwriting, which is a fun process that gets missed with the adult stuff, while nudinits is more thinking up funny puns, but the animation process is no different. 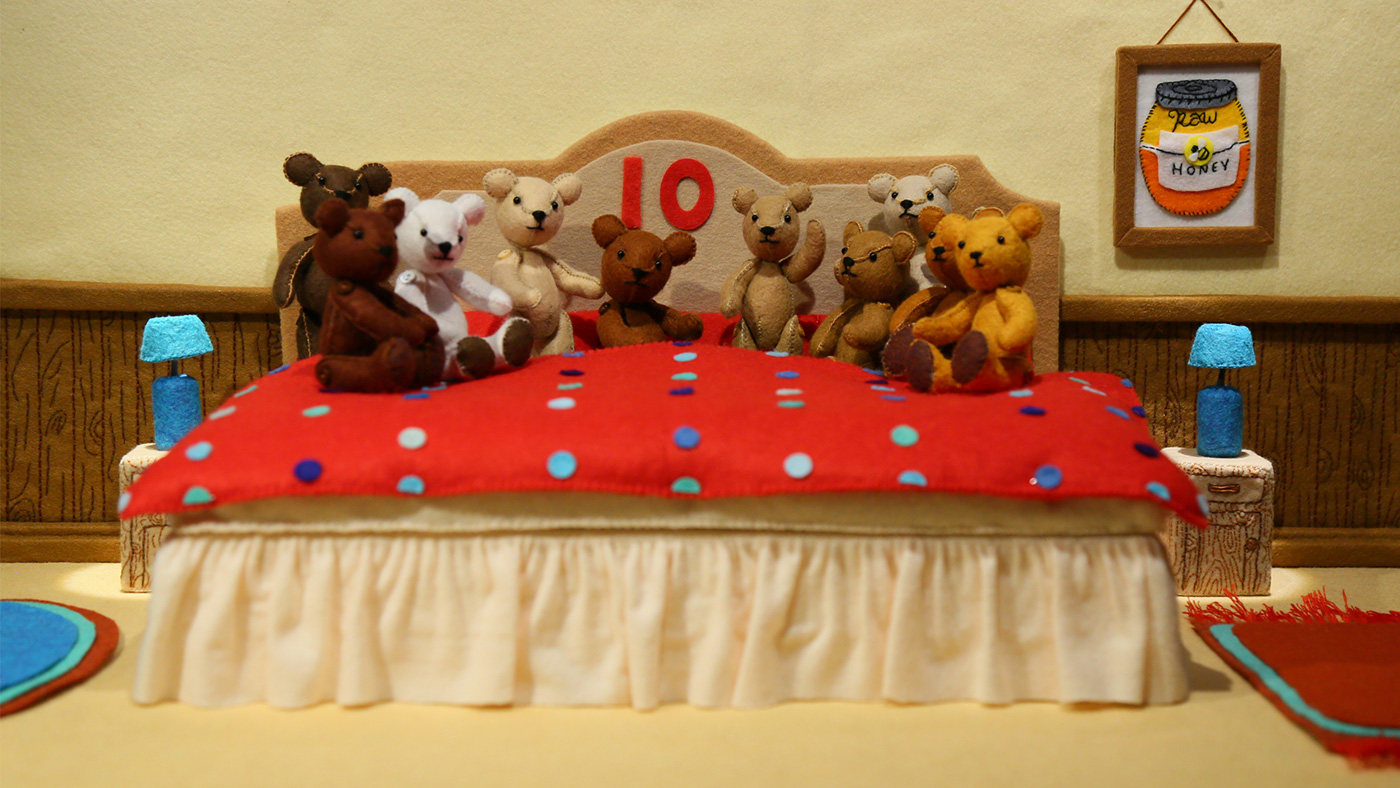 Croydonist: How do you come up with your plots?

Sarah: Normally one of us has an idea which the other either vetos or gets enthused about! We both keep making suggestions till it feels a complete thing, then usually just one of us writes it up into a script.

Ed: It often starts with a situation, and then we come up with the backstory to how the characters got into that situation. The idea for Woollyfoot clicked when I wanted him to dance, the story evolved from finding a way for him to find music to listen to when he lives in the wilderness. For nudinits, Sarah might think of a funny situation for the vicar to be in, and then work out how he got there.

Croydonist: Who does all the knitting?

Sarah: I make the knitted characters in nudinits but had enormous amounts of help from other knitters to make all the sets most especially Caroline Bletsis who has also written patterns for both the nudinit books we have out.

Croydonist: What’s been your most challenging character to create?

Sarah: In terms of actually making them, all of our characters hold challenges as they are made of wool or fabric but need a wire framework inside – you’re trying to make something look soft and squishy but be easily malleable and hold into all the positions needed for animation which is always tricky. I had many, many failed attempts at making the first nudinit puppets which all ended up in the bin! In terms of design I would say our Woollyfoot character was the most challenging – we just couldn’t get him looking right despite lots of tweaks. Then it all fell into place and he suddenly looked like a proper character.

Croydonist: What’s your process for creating an animation, and how long does one episode typically take you?

Ed: The process starts with a loose idea which we develop and script. Actors record voices to the script or in the case of nursery rhymes, the music has to be made first. Next comes storyboarding, the storyboards are then edited to the soundtrack to make a rough animation called an animatic. Once the sets and puppets are finished, the animatic scenes are replaced with the finished footage. Scheduling production of several projects at once and working around the availability of model makers, musicians, actors etc. means that even a very short film can take a year or more. But for tight deadlines the production time can be compressed into a couple of months. One set takes a few weeks to build, but often several are on the go at once. The actual shooting of the animation takes about a half day to build and light the set, and then around 20 seconds of footage can be shot in a day. Post production takes around 3 to 4 times as long as shooting. 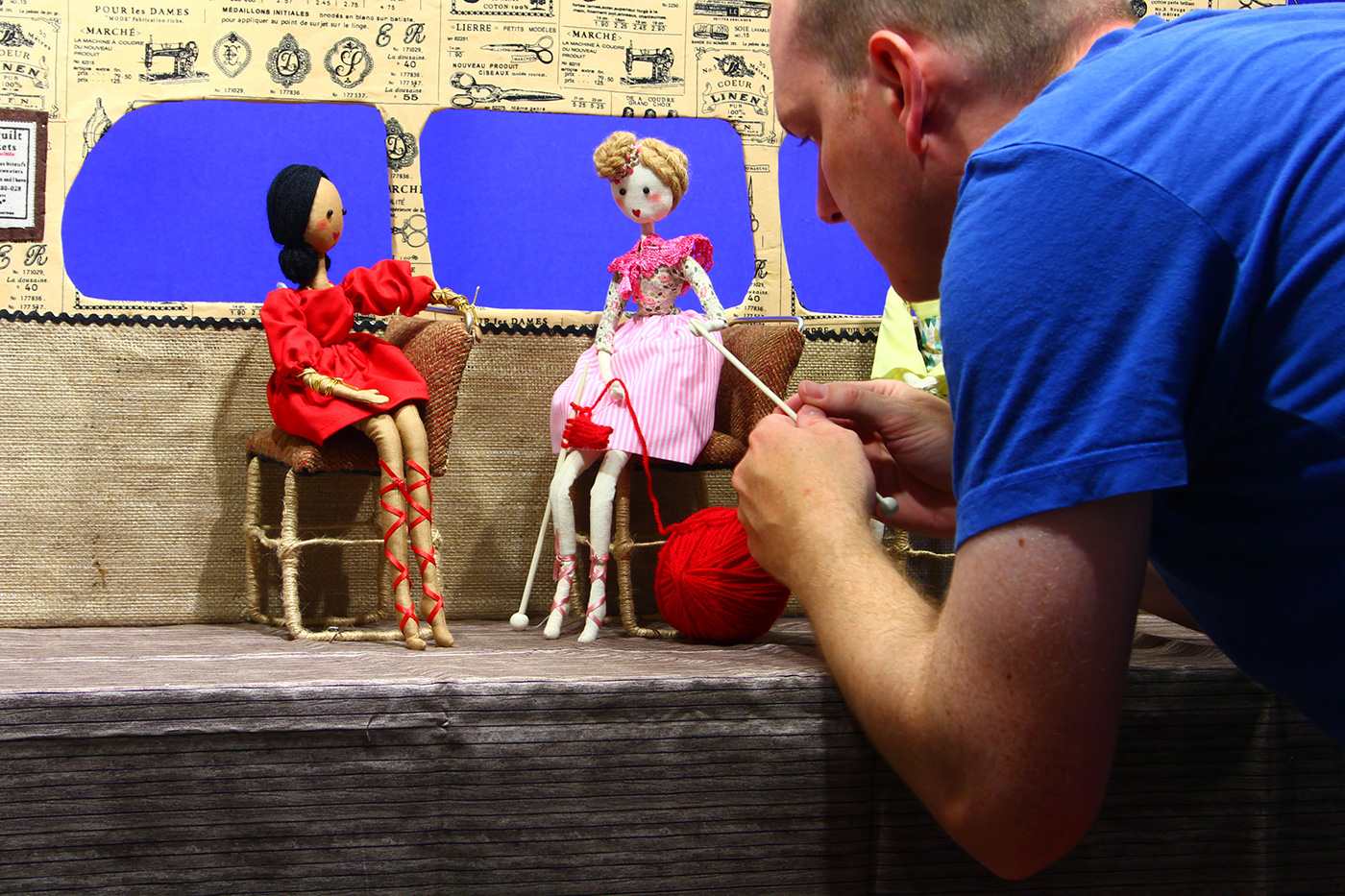 Croydonist: Is there somewhere you go in Croydon for inspiration?

Sarah: My drive into Croydon is often a time I think of ideas. I was idly staring out the car window the other day and saw a lady taking her macaw for a walk (fly?) at a busy roundabout, it’s an interesting place!

Ed: I have spent many shopping trips to Croydon in the past to get fabrics, and art materials to make puppets. But the most inspiring part of the trip is a visit to the cinema. I also like the tram, but there haven’t been any trams in our films yet…

Croydonist: Classic interview question now – if you had to invite three creatives over for dinner who would they be?

Sarah: I’d go with Victoria Wood (because she made me laugh till it hurt) David Hockney (as I could stare at one of his paintings for hours) and Alan Bennett (for being able to write such great characters). I would want advice from them all.

Ed: Jim Henson, Nick Park, John Lasseter.  Giants of animation and puppets. I grew up watching Henson films and TV shows like Fraggle Rock and Labyrinth. I have gone through Wallace and Gromit films frame by frame and read the storyboard books to see how they were made, and everyone loves at least one Pixar film. 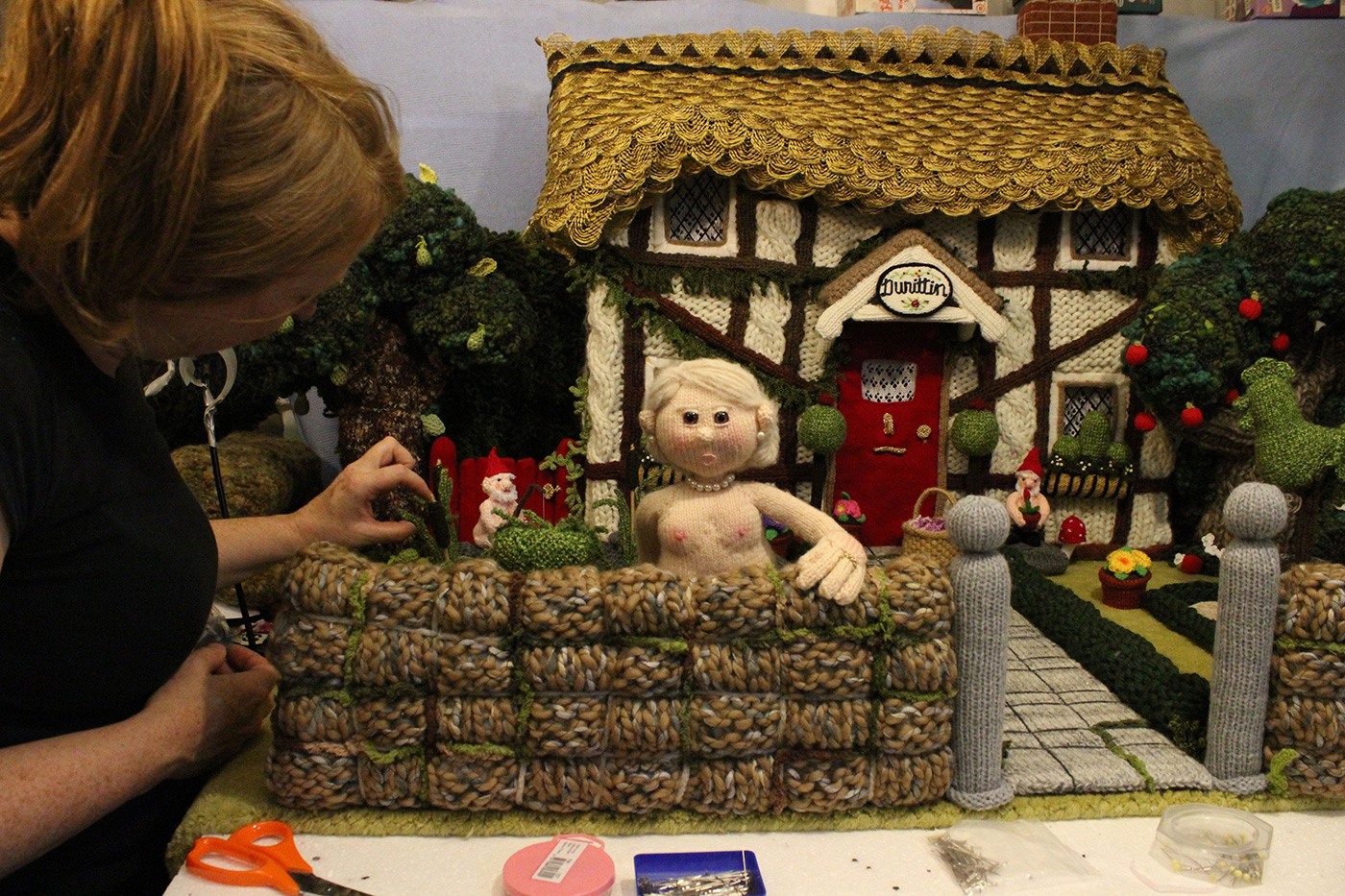 Croydonist: You’ve won many awards for your work, what’s next for you this year?

Sarah: We are setting up a youtube channel for pre-school children called Little Woolly Vision. This will be full of nursery rhymes and children’s songs and stories all made with felt and animated by hand.

All images courtesy of Woolly Vision.