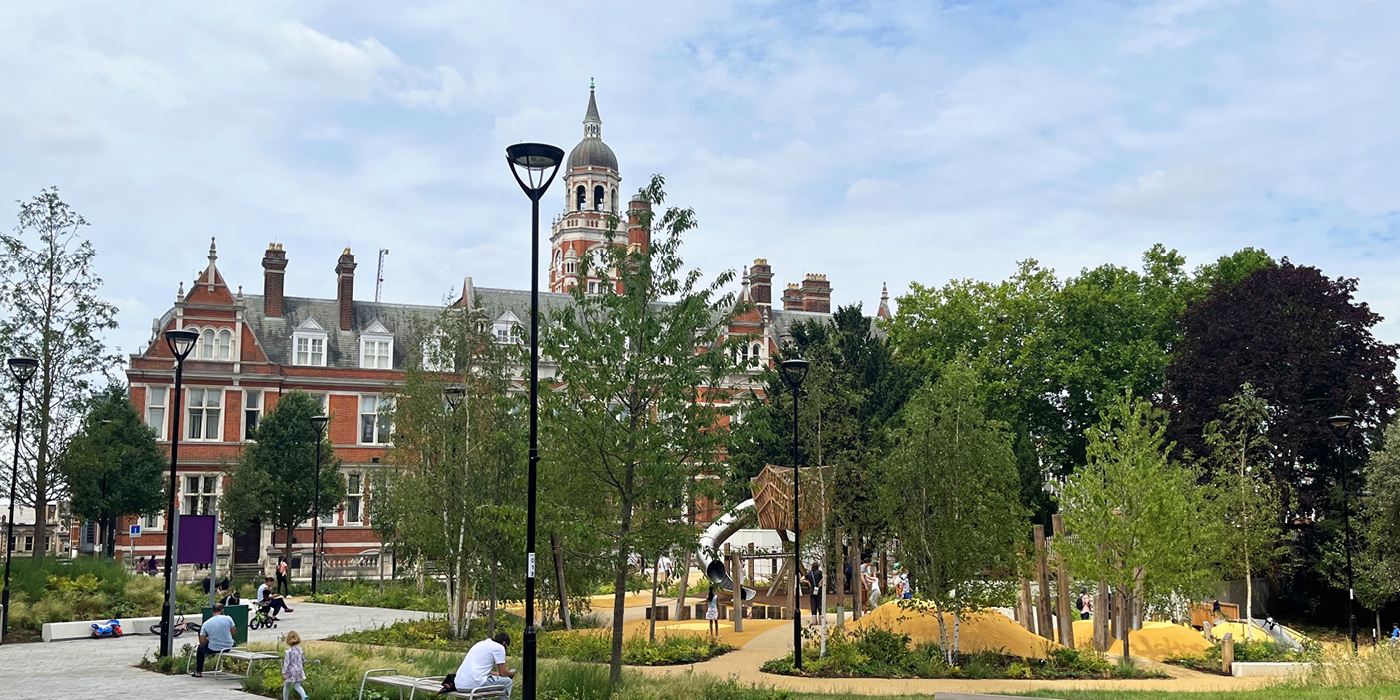 If you frequent the centre of Croydon I doubt it will have escaped your notice that we have a new park! Ok, not a ‘new’ new park. However The Queens Gardens (now with a new and improved design) has been officially reopened after its 2020 closure for the adjacent flats development.

My daughter and I were eager to get down there at the weekend for a picnic and try out the much anticipated playground. For a compact space, it packs in all the great elements of a park, from a modern and quirky play area for both little and bigger kids, to a wild meadow, lots of seating and even a water feature. I reckon The Queens Gardens will fast become a ‘destination’ for all local parents’ weekends.

Having been called The Queen’s Gardens since 1983, the park was previously known as the Town Hall Gardens which was opened in the space where Croydon Central Station once stood over 125 years ago. Our 2022 park still retains a lot of the historic layout, including the sunken garden where Victorians used to take a stroll.

Fast-forwarding to recent history, a lot of locals have a deep affection for The Queen’s Gardens, namely because of the community Saffron Farm which stood on part of the site from 2015. We caught up with the founder of the farm, Ally McKinlay, as well as his daughter Bonnie, to hear their views on the new park, and how they were involved in its redevelopment. 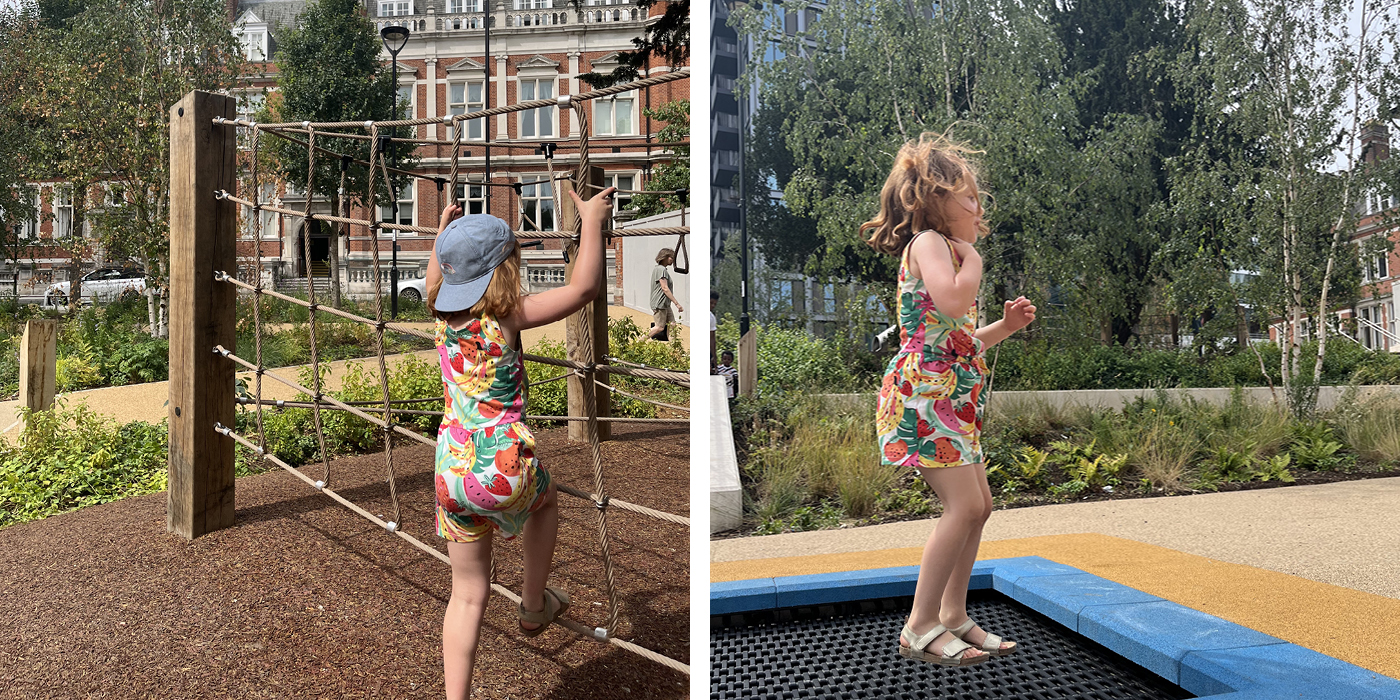 Croydonist: First of all, are you Croydon natives or converts, and where do you call home?

Ally: I was born in Mayday hospital in 1976 and grew up in Sanderstead. I then went to University in Worcester and travelled around Australia and South-East Asia. I call home ‘Waddon-on-Wandle’, which is where I’ve lived since 2001, but my parents are from Scotland so that’s also a home in my heart.

Bonnie: I was born in the lounge of our house in Croydon in 2009! My mum has a Scandinavian background of Swedish and Finnish. I call Croydon home but also Sweden and Åland in Finland. 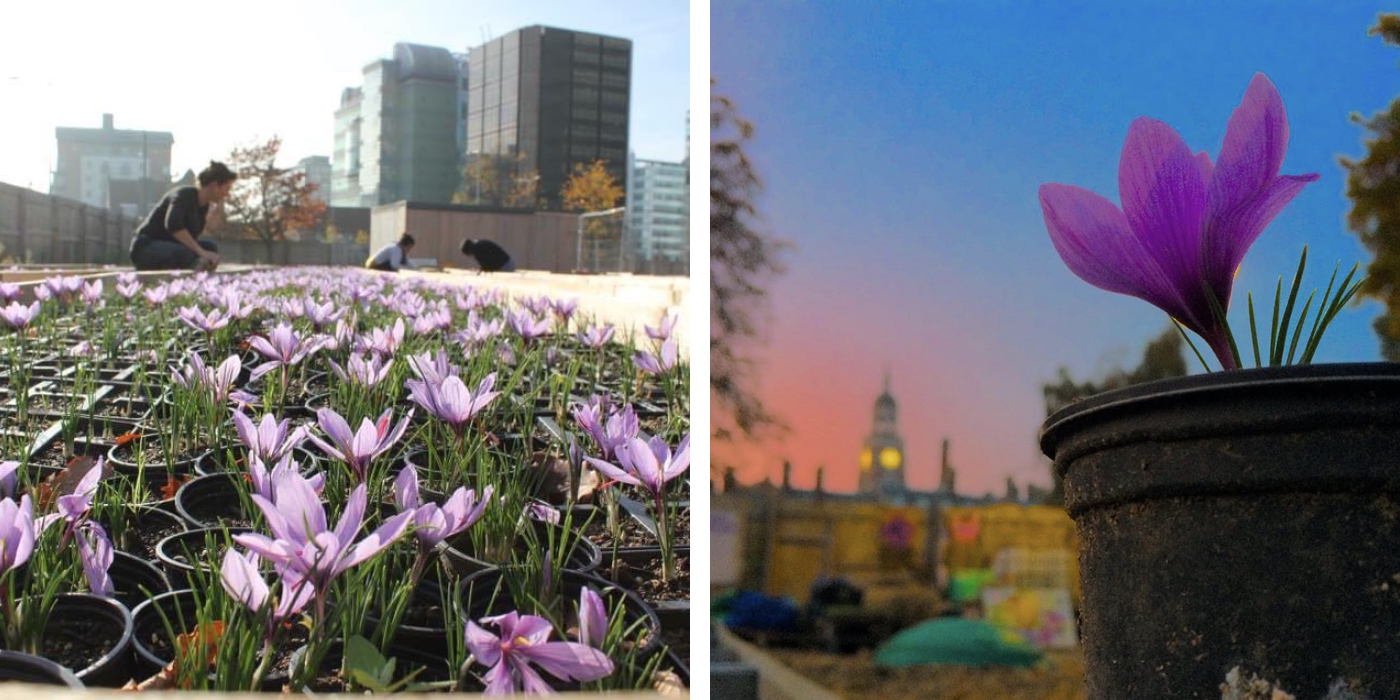 Croydonist: Ally, for readers who are new to the Croydonist, can you tell us about your history with The Queen’s Gardens.

Ally: In 2015 I had an idea to create a pop up Saffron farm on the demolished Taberner House site. I had a radio show on Croydon Radio called ‘Made In Croydon’ which had a feature called ‘Crocus watch’. The focus on the crocus was because some folk thought Croydon’s name had evolved from the Anglo-Saxon ‘Croh Denu’ which translates to ‘Crocus Valley’ or ‘Valley of the Crocuses’. There is a thought that the Romans may have farmed Saffron here. I’d grown some successfully at home the previous year and had a vision to fill the site with the Crocus Sativus and then share the plants throughout the valleys of Croydon!

The space became known as Croydon Saffron Central which was crowdfunded via Spacehive and supported by hundreds of people from the community. 20,000 corms were potted up with around 11,000 flowering, the Saffron was harvested using tweezers and in total produced 58 grams. Many of the plants were shared with community gardens and groups, schools etc, but we were given permission to stay on site for a longer period of time so we also tried to nurture the plants that remained too and bring a fresh focus whilst the corms lay dormant.

In 2016 Croydon Saffron Central (CSC) became a ‘Beehaven’ with beehives added to the space by Croydon Beekeepers Association and the planting of bee friendly flowers. People started painting flowers and bees on the inside of the hoardings and creating artistic installations. The Royal Horticultural Society (RHS) awarded the garden a Level 4 (Thriving) in the Community Garden Awards. CSC featured in the Croydon Heritage Festival, Open House London and a second Saffron harvest took place.

In its third year the space was turned into a giant rainbow flag in honour of Croydon Pride taking place in The Queen’s Gardens in 2017. There were 6 planting lanes so people donated plants that were the colours of the rainbow and more artworks appeared with a focus on hearts & rainbows. The space was really special for people to connect, socialise, be creative and learn about plants and nature, health and wellbeing.

Many of the supporters of CSC went on to get involved in the collaborative design with HUB for The Queen’s Gardens. I think around 1,800 people were consulted by Kaizen and there were 50+ people attending the planning sessions. When it was time to leave the site, the plants, pots and equipment were shared around various community groups of Croydon. It was sad to leave but a wonderful experience that benefited a lot of people and I’m truly grateful to everyone who supported this idea. 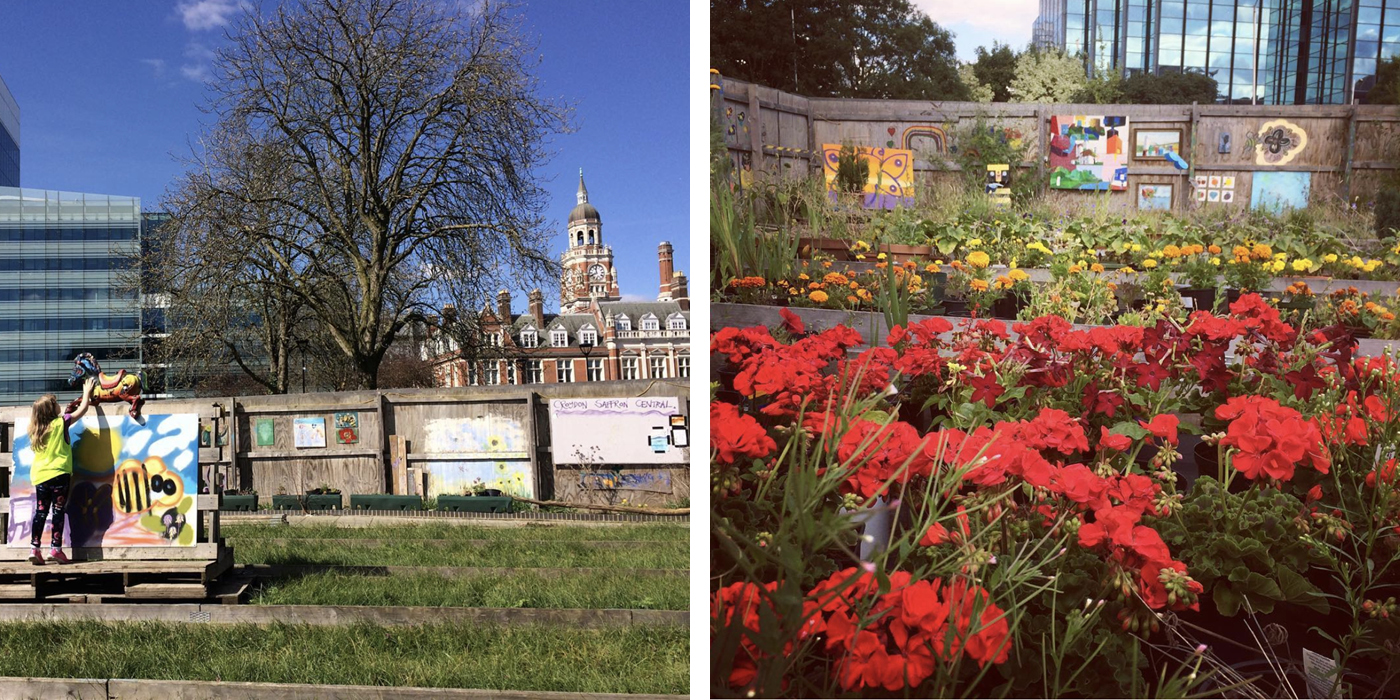 Croydonist: Do you have any plans to grow saffron again in Croydon?

Ally: Saffron has proved quite challenging to ensure it flowers each autumn so I think more research would need to be done for it to be an ongoing success. That said, CSC was a truly wonderful experience for me and so many people who supported it. I would absolutely love to develop a new space where people can grow plants and be creative in the town centre. Nature and creativity have always been precious in my mind and I think the recent years have shown how important they both are for our society and our planet.

I see empty plots of land or grim looking places and think ‘we can do something amazing with that space’. I have a lot of ideas about how we can engage the community in making positive decisions for our living environments and having a dedicated space that inspires everyone would be incredible.

I know that the Crocus connection with Croydon’s name is contested by some people which is fine. There was also a lot of confusion between the autumn flowering Crocus Sativus (the Saffron one) & those seen in the springtime. Whatever the view, I think that Crocus Sativus is a stunning flower and if Crocuses help give Croydon a shared identity then that’s great. The Croydon Girl Guides have had it as their logo and Sarah Jones MP mentioned CSC in her inaugural speech in the House of Commons. 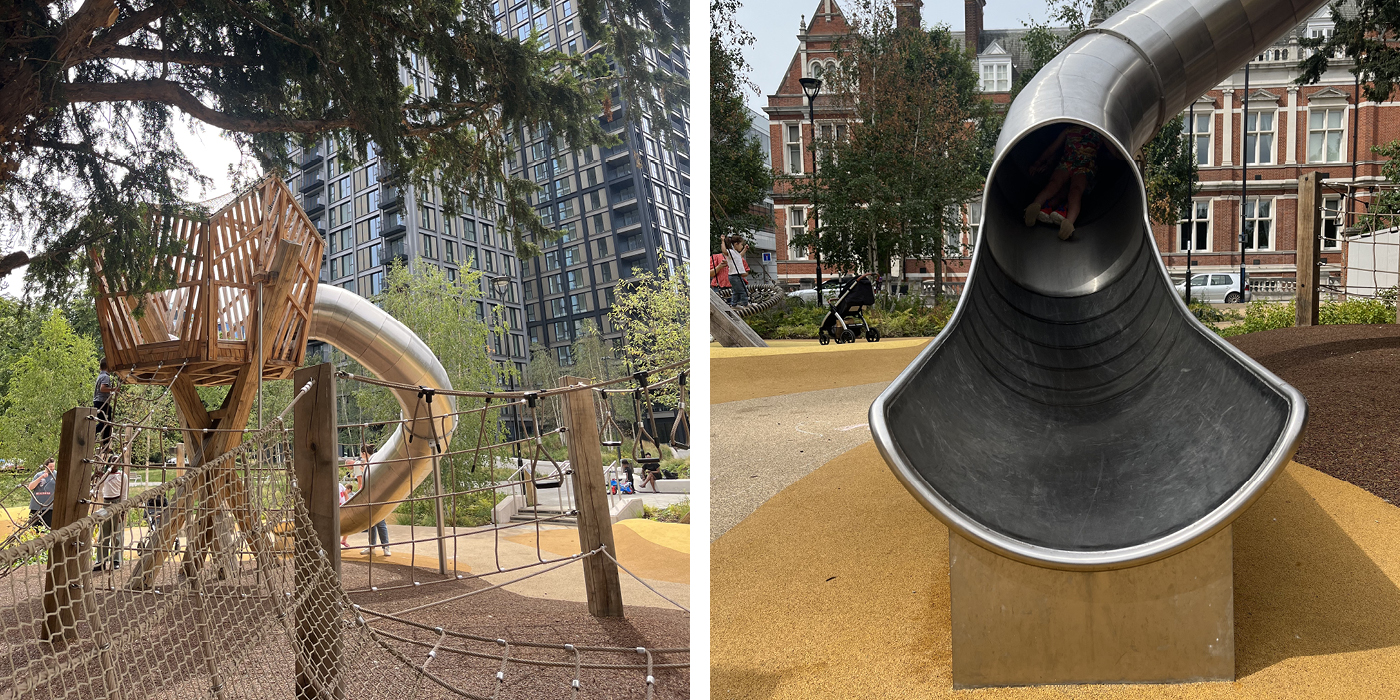 Croydonist: What are your favourite parts of the new Queen’s Gardens?

Bonnie: My favourite parts are the playground, I think that’s very nice for children and people to play. I also like the greenery places, it’s very nice if you want to sit down with friends and have a chat and it’s suitable for all ages.

Ally: Sorry but I’m not great with having favourites! I really love the play space and absolutely love the ‘Saffron slide’. I believe children should be seen and heard so it’s quite a statement for Croydon to have a fun space for young people next door to the Town Hall. The space in between the four buildings is substantial and allows a view of southern skies that wasn’t possible with Taberner House. It also includes a rare bit of water in the town centre which I again believe is really important for the wellbeing of our community. The sunken garden is a wonderful sun trap but I am concerned about access here after the café development hasn’t happened in the north-west corner and it seems you can only get down there via steps.

Croydonist: We hear Bonnie designed the new slide – can you tell us more about the inspiration for the design?

Ally: I was in the group that focused on the planting, so I didn’t know anything about the detail of the slide until after the planning sessions when we were shown some official plans! I was totally blown away that they took Bonnie’s idea seriously and then actioned it into a real thing!

Bonnie: With the design I wanted to incorporate what was there before, Croydon Saffron Central. The original design was that it would have 6 petals as with a Crocus Sativus and three slides to represent the Saffron stigmas. There must have been an issue with having three as they have only used one. The netting represents the leaves/stem to the plant and is used to climb up to the flower. You can then slide down a pole or use the ‘Saffron slide’. 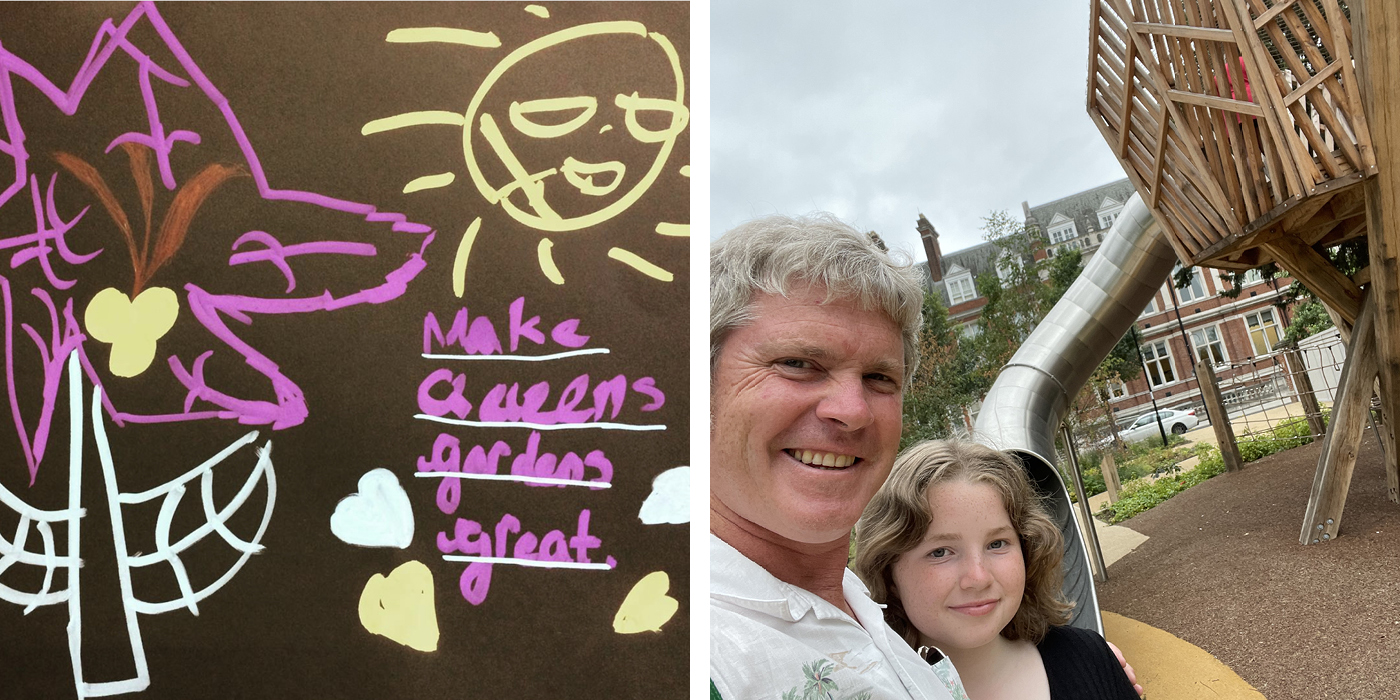 Croydonist: What was the process involved with the slide from design to production?

Bonnie: We did a brainstorm conversation which involved putting all our ideas together to think what would be best for the space. We split into three groups, one for the garden, one for the playground and one for the café. I chose to be in the playground group because that’s what I thought would apply best for me!

I was mainly thinking about what we could put in there and what would be good, what would make children want to use the space. We were asked to think about a section where slightly younger children can play and slightly older children or children who are a bit braver!

For the design, I sketched out a flower with stigmas going down and then I realised that would be a pretty good slide. I gave them my sketch and then they turned it into a proper plan for what has been built. I didn’t realise that it would actually be involved in the whole production until this point. My Dad informed me that he could see it being built and I was very happy and excited to see it finished. 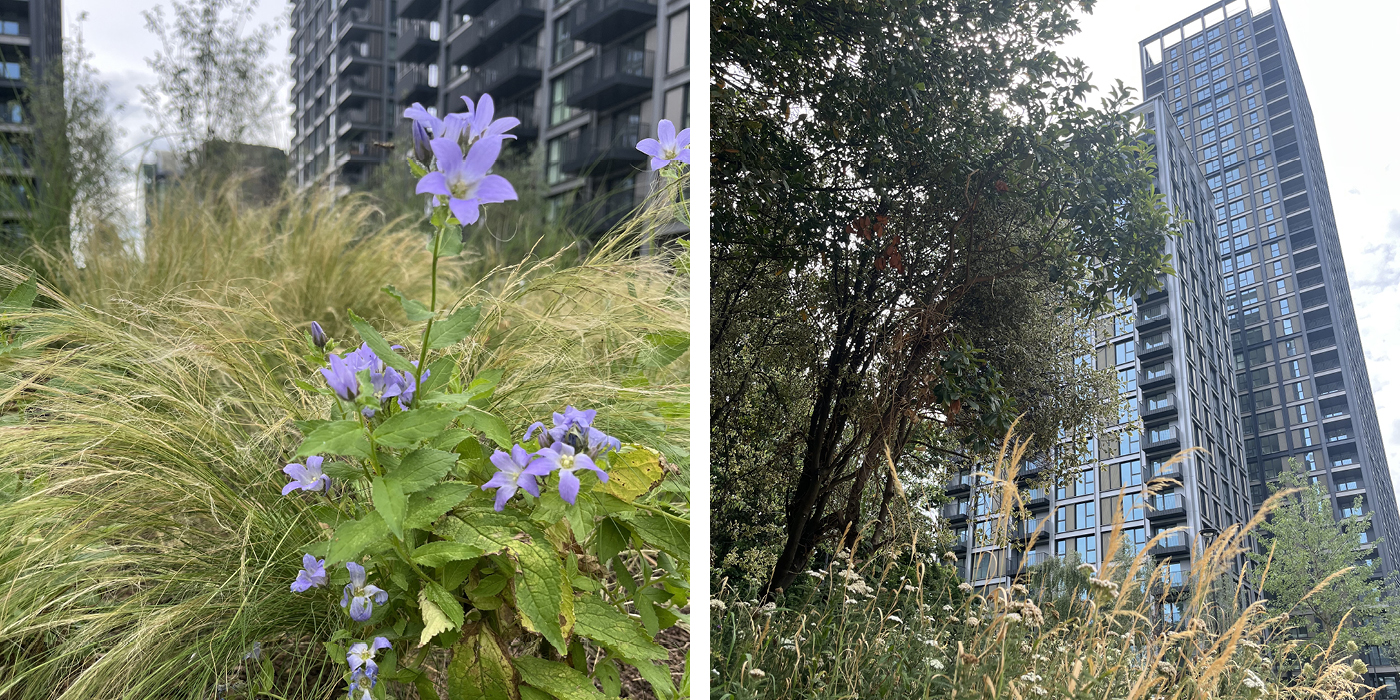 Croydonist: In addition to this new park (of course) which Croydon greenspace is your favourite, for a wander?

Bonnie: My favourite is The Queens Gardens and probably the places where I can sit with friends in greenery. I was with my friends in the gardens and they really enjoyed it. I think there needs to be more circular seating for people to socialise because I think that would make young people want to be in greenspaces more.

Ally: I see the greenspaces of Croydon as a multitude of therapeutic opportunities which can cater for a variety of needs. If I had to choose one I’d probably go with King’s Wood where I played a lot as a child. It’s a hearty woodland space that you just know has some ancient significance being so close to the highest point in Croydon (Sanderstead Plantation) and the junctions of Addington and Limpsfield Road. Who knows if the Romans grew Saffron on the north downs but I like to think that they might just have tried!

Thank you to Ally and Bonnie for chatting with me – I recommend you check out the new Queen’s Gardens if you haven’t already done so.

Such a pleasure to have news of Croydon gardens, woods, and playspace. Ally and Bonnie have the creative imagination to develop neglected spaces and recruit support.

Sue and I live in Salford. We often visit Croydon and know how much it has to offer. Much changed since 1975 but for the better. Great to have family there. London Mozart Players too!

Proud to have family making a positive impact on the community in which they live for the benefit of all residents in a green space.