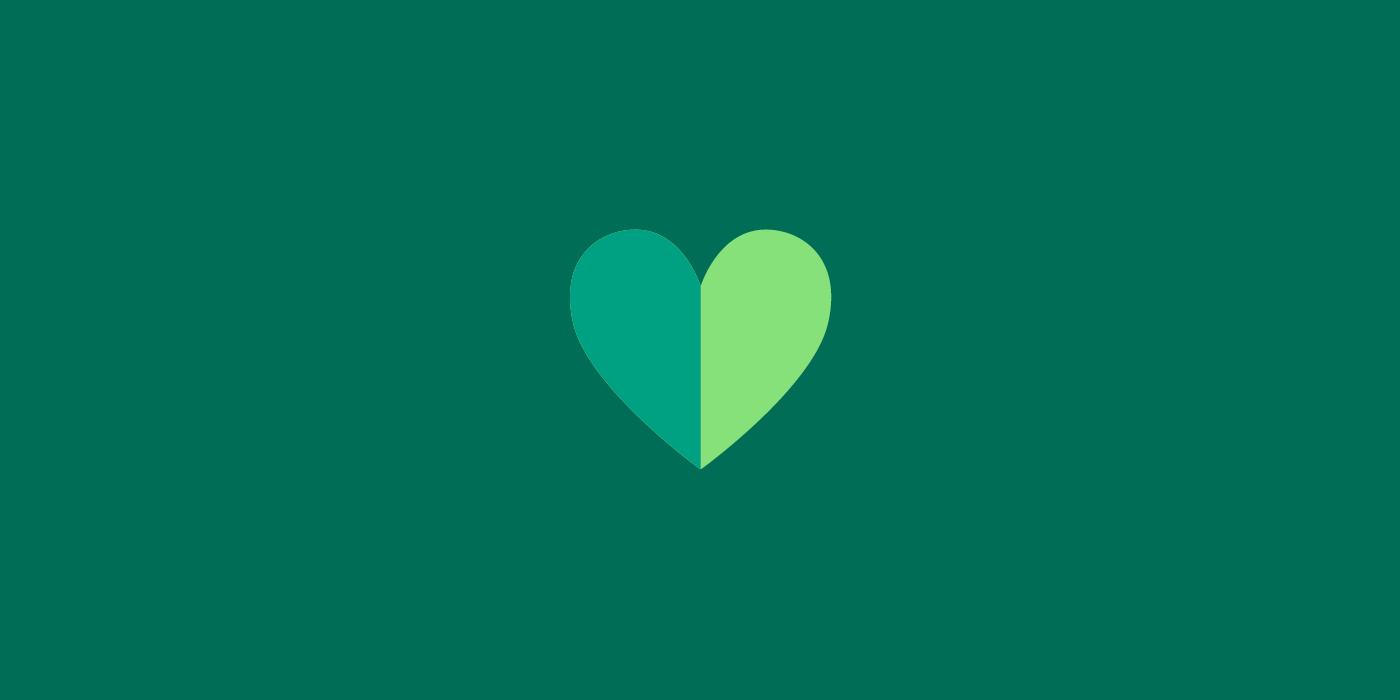 In our Croydonist climate series, we look at some of the things businesses and individuals do in Croydon to help combat the climate crisis.

The Great Big Green Week starts this Saturday (18th September). Run by The Climate Coalition this national campaign sees local communities across the UK creating thousands of events to raise awareness of climate change. This year it can’t be more crucial, with the UN Climate Change Conference being hosted in Glasgow in November.

Our borough’s very own Croydon Climate Action, which was set up to look for local solutions to the climate crisis, has organised a series of events for Croydon’s Great Big Green Week, including neighbourhood clean ups, author talks, conservation sessions, guided nature walks and a film screening, with the week culminating in a festival on Sunday 26th September. We catch up with the team behind Croydon Climate Action to find out more about the group and how we as Croydon residents can get involved. 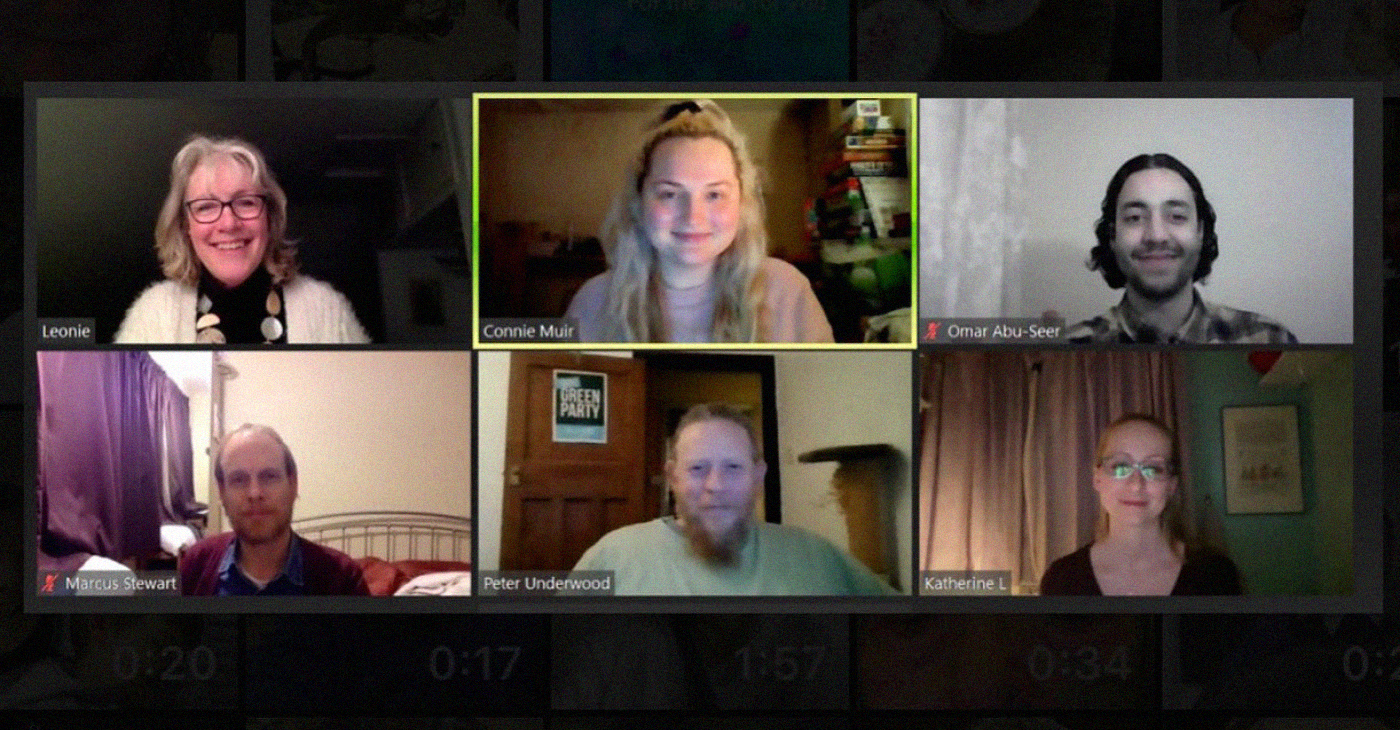 Croydonist: Who are the faces behind Croydon Climate Action?

CCA: Croydon Climate Action is run by 6 people – Katherine, Connie, Léonie, Anna, Omar and Marcus. We are all local people who love Croydon and genuinely want to inspire others to help create a greener and more sustainable future for the borough. We then have a large membership of enthusiastic people who engage with the group in different ways including coming to our monthly meetings online, our in person events, or in our WhatsApp group.

Croydonist: What does Croydon Climate Action do?

CCA: We work with everyone and anyone in our borough in a range of ways. One way is through lobbying the Council to ensure they have a practical, realistic and effective Climate Action plan for the borough. Another focus for us is to raise awareness of environmental issues, both those happening on a global scale and locally, and what we can actually do to help. Activism and staying up to date with the news can be really exhausting and demoralising, so we aim to provide a safe space to discuss matters openly and remind each other that we’re not alone. We are also in the process of setting up a green schools network, to engage young people and children in climate activism too.

Croydonist: How does the group link to Croydon Friends of the Earth? 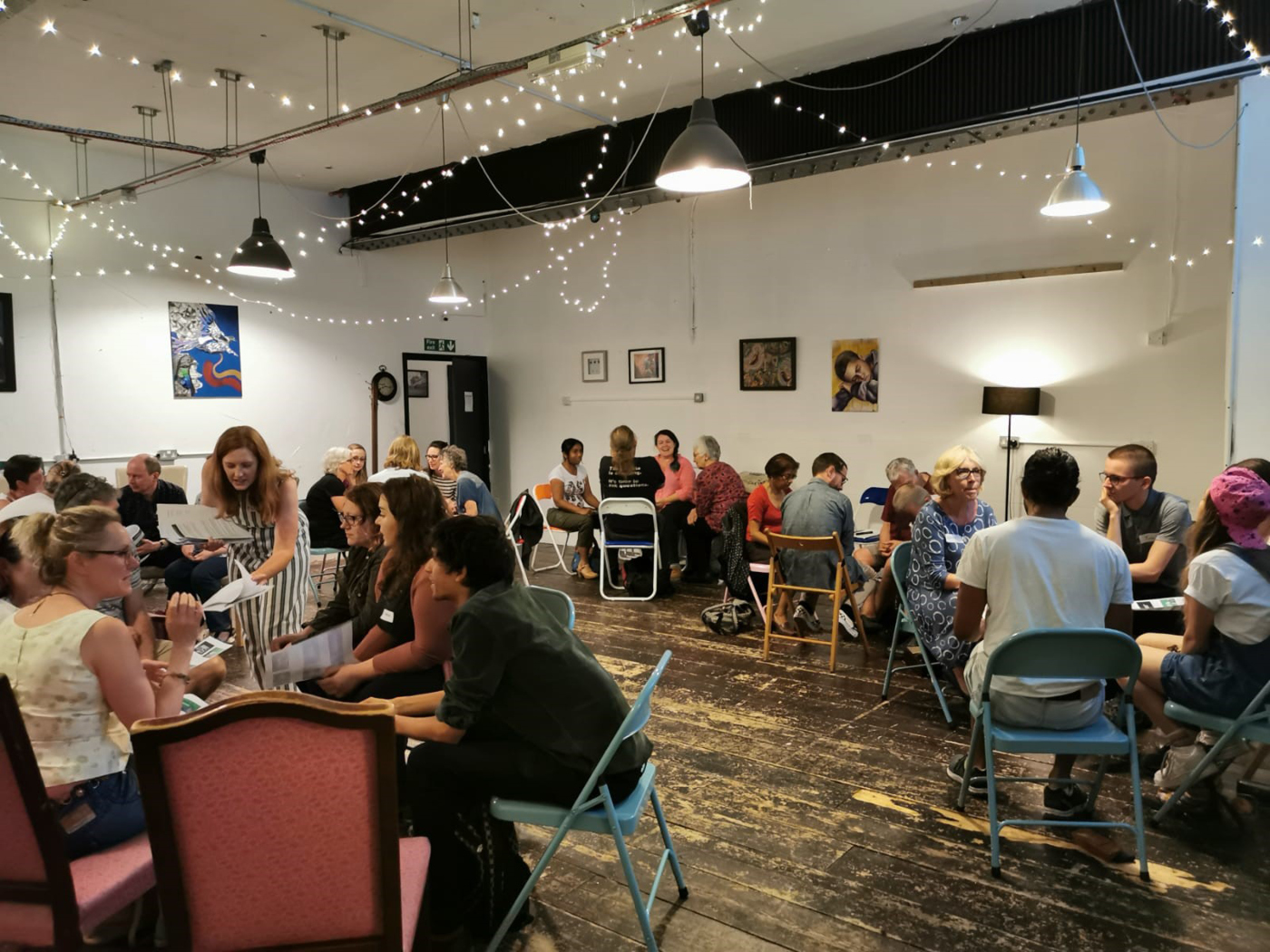 Croydonist: Can anyone get involved with the group?

CCA: Yes! Everyone is welcome, especially those who have never been involved with similar work before. We aim to work with as many people as possible and in collaboration with other groups across all sectors. We are aware that there are many communities who have been systematically excluded from these spaces and are actively trying to counteract this. We are a friendly and welcoming group who are open to all. How much you want to be involved is up to you – whether you have loads of free time or can only spare an hour a month to come to our meetings, it’s all great. We have meetings on the 2nd Wednesday of every month at 6:30pm via Zoom. We also have an active WhatsApp chat, mailing list and presence on most social media platforms (Facebook, Twitter, Instagram, LinkedIn and Nextdoor) so it’s incredibly easy to find out what’s going on with us.

CCA: This November the UK is hosting COP26 in Glasgow, a huge meeting of the world’s nations to discuss and decide how to tackle the climate crisis. It will be the biggest summit the UK has ever held and it’s crucial that impactful decisions are made and agreed upon during the summit – the UN itself has described it as “the world’s best, last chance at getting runaway climate change under control”. Croydon’s Great Big Green Week is part of a nationwide campaign by The Climate Coalition to raise awareness of the climate crisis but also to highlight the work that so many communities are already doing.

We want everyday people in Croydon and beyond to learn about the different ways the climate and environment benefit them and how they can help it in return. We hope Croydon’s Great Big Green Week will be a catalyst for ambitious action that will help to reduce our emissions and dependence on fossil fuels. Croydon Climate Action were lucky enough to secure some funding and we have loads of brilliant activities planned including neighbourhood clean ups, author talks, conservation sessions, guided nature walks, a film screening and more. We’re also hosting Croydon’s Great Big Green Festival (featuring different stalls from different organisations, many local) on Sunday 26th between 11am and 2pm outside Allders and we’d love to see you there. All events are listed on our website. 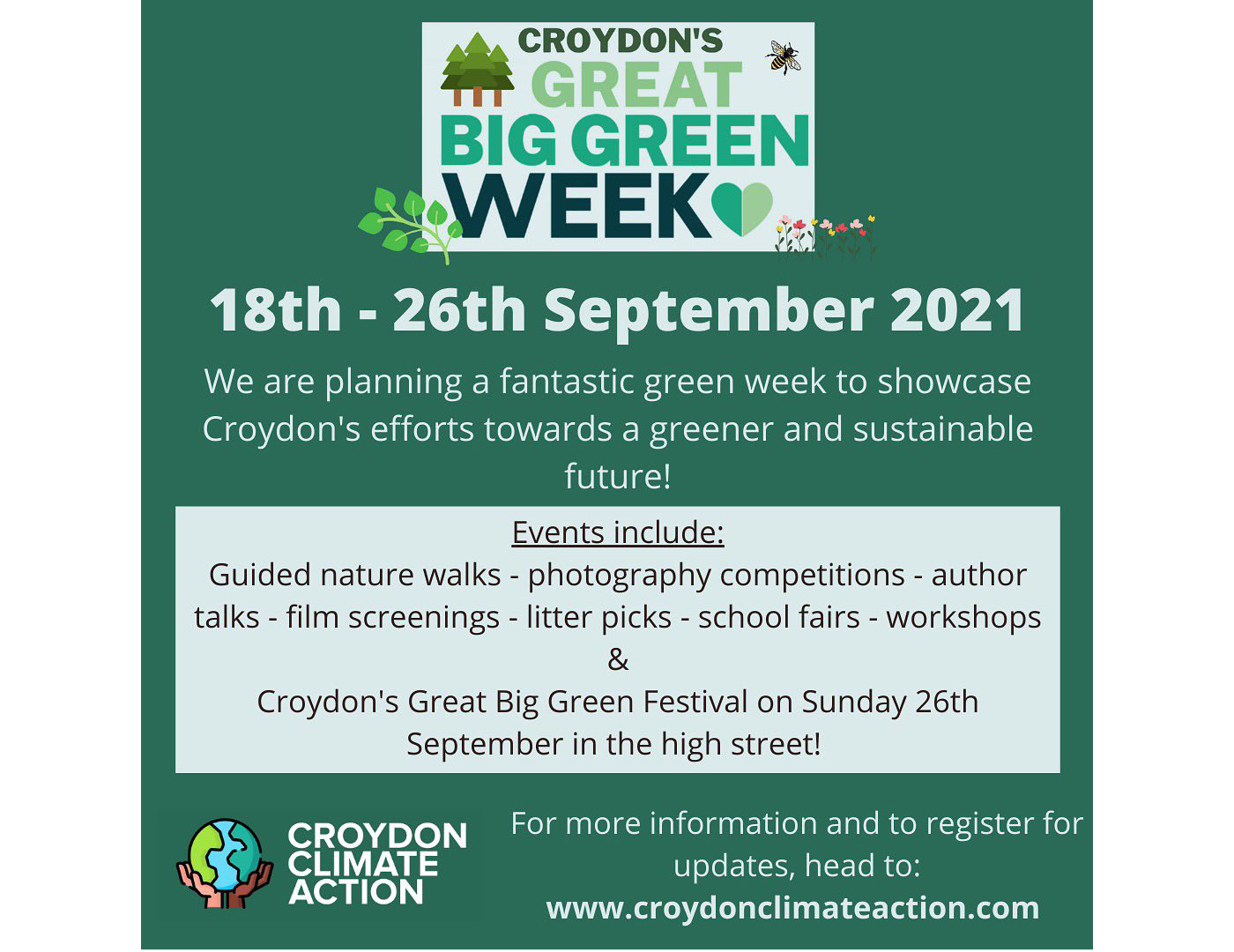 Croydonist: What can our readers do to help?

CCA: We appreciate that when thinking about the climate crisis, it can be really overwhelming and we frequently hear that many people don’t even know where to start. One easy thing you can do is to join groups like ours and just start talking and raising awareness of local environmental issues. Many people still don’t fully understand what’s happening, so this is a great time to teach them. We all share articles, tips and solutions all the time about what we can each do, and it really helps. To join us, you can get in touch via email, WhatsApp or any of our social media channels, and also subscribe to our mailing list via our website.

Croydonist: What other projects and campaigns are you working on?

CCA: Earlier this year, we met with and held a public hustings session with the Croydon & Sutton London Assembly candidates, in which we pressed them on environmental and ecological issues and asked them to sign our pledge to hold the Mayor to account when making environmental decisions. We are currently organising Croydon’s Great Big Green Week (more on that above!) and we are starting to plan some events in the runup to COP26. One campaign we’re looking at supporting is “Feed Our Future”, which aims to introduce more plant-based food onto school menus. We are really open to whatever our members want us to focus on, and support everyone’s projects in their own neighbourhoods too. 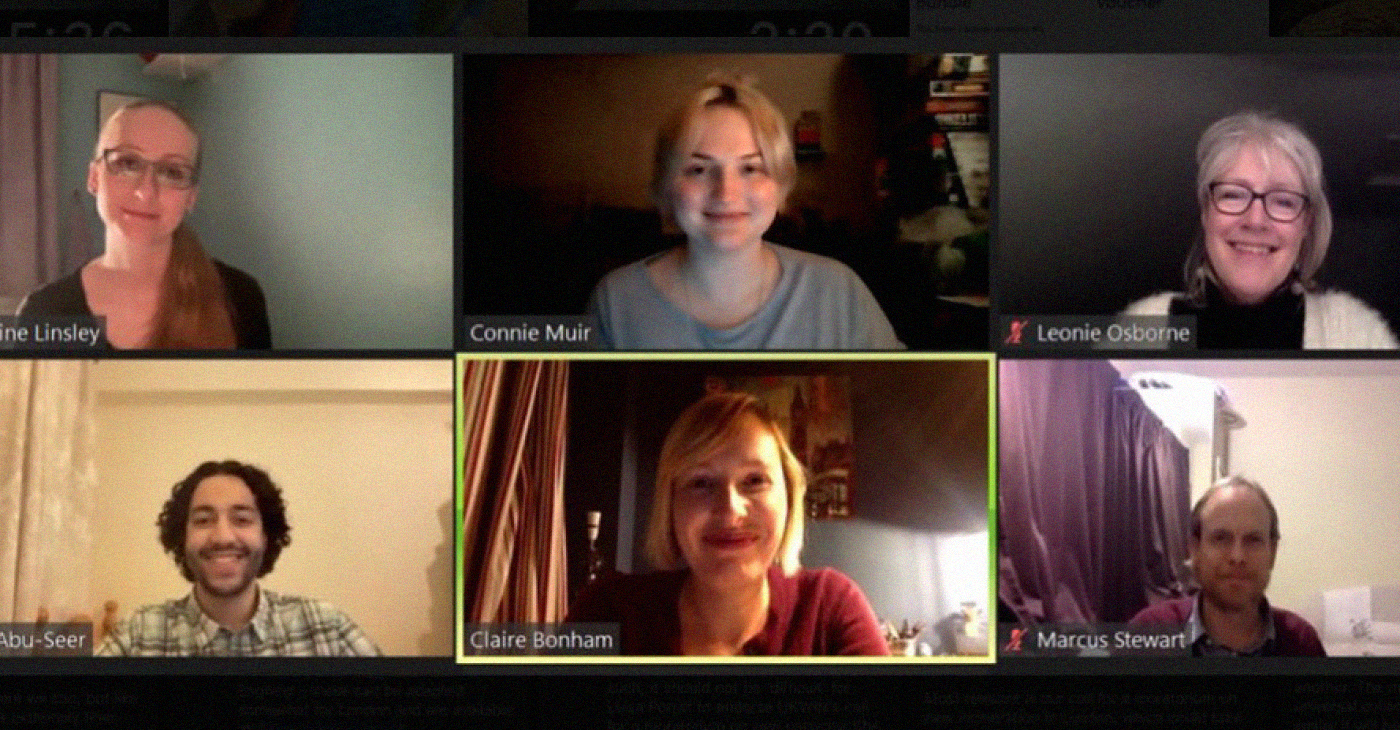 Croydonist: What three things would you encourage Croydon residents to do to help minimise their impact on the planet?

2. Get involved! Individual actions such as becoming plastic free, vegetarian/vegan etc. are not going to prevent climate breakdown. However, by working together we can create meaningful change and send a message to those at the top. It can be with our group or one of the other great groups in Croydon, and all sorts of skills are needed – from those who are keen on active events such as protests, to those who prefer to support on the organisational side of things. If you don’t have much spare time you can still make your voice heard by signing and sharing petitions, writing to your elected representatives, donating, voting and even retweeting articles and educational threads. All people and all skills are needed.

3. Move your money. It is highly likely that money in your savings, investments and your pension is being used to invest in industries that are deliberately harming people and the planet – everything from fossil fuels to weapons. Switching is relatively simple to do these days with several great independent websites that show you alternatives. Divesting (the process of moving your money away from such polluting industries) is one of the most important steps you can take. Research shows that simply moving your pension to an ethical and green scheme will reduce your carbon footprint 21 times more than giving up flying, becoming vegetarian and switching to a renewable energy provider combined.

Croydonist: Classic interview question – if you had to invite 3 notable people to a workshop to help solve the climate crisis who would they be?

Katherine: Ohhh that’s tricky! I think I’d like to invite 3 indigenous activists from around the world who have been on the front lines of the climate crisis for decades. I’d like them to be the driving force of a workshop with world leaders, heads of giant corporations, and fossil fuel companies. We as ordinary citizens only have so much power and every person on this planet needs governments and corporations to step up and take real meaningful action to reduce emissions right now – targets by a certain year are meaningless unless we start today. For that reason, I would invite geographer Hindou Oumarou Ibrahim from Chad, politician Sonia Guajajara from Brazil, and human rights activist Marinel Sumook Ubaldo from the Philippines. Look them up – they’ve done incredible work. 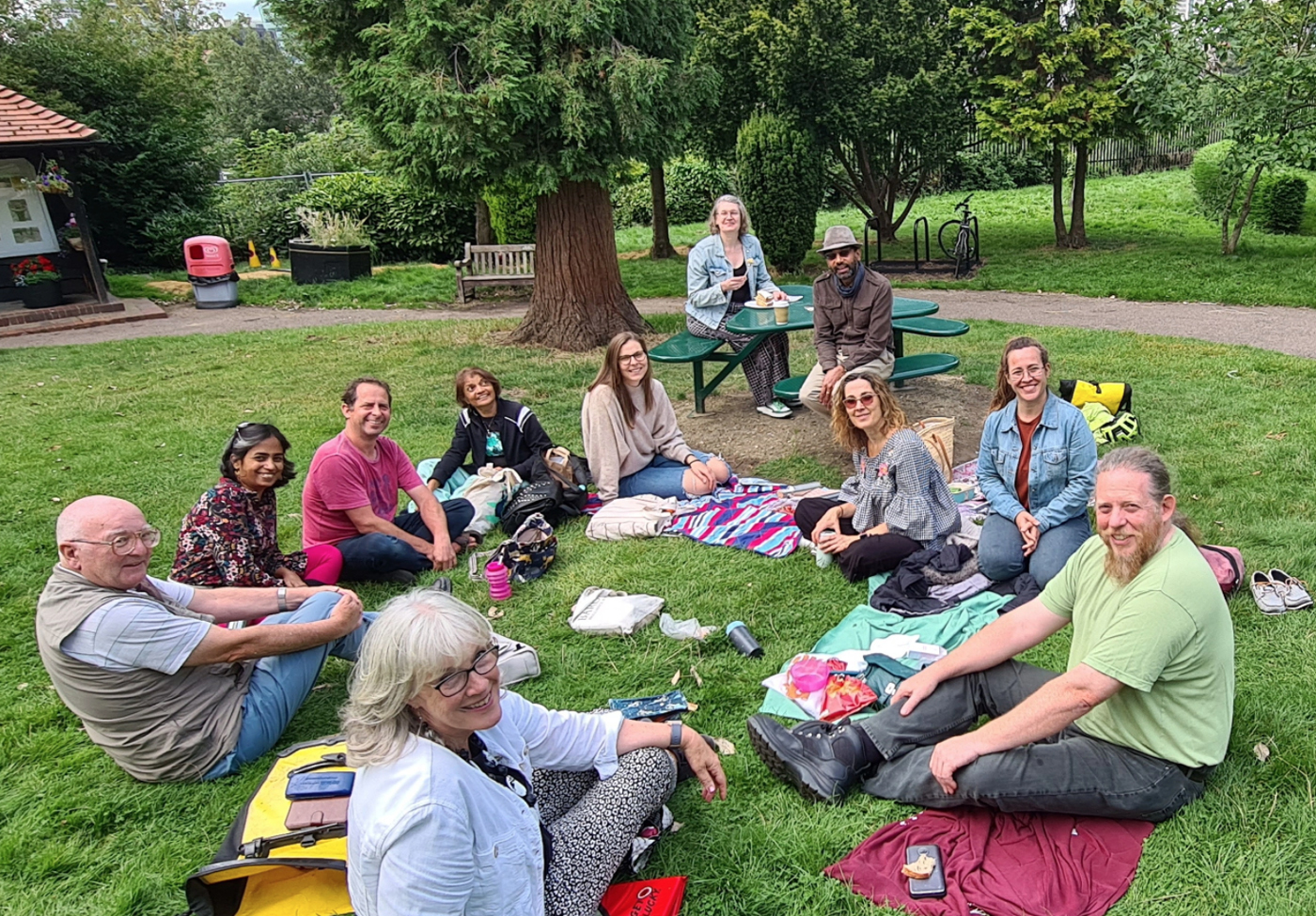 These are a few of our group members and Leonie is at the very front from our picnic last month – our first in person meeting in over a year!

Croydonist: What or where in Croydon inspires you?

Katherine: The people do! So often Croydon is written off in the press and the public consciousness but if you actually get involved there are so many people from all walks of life working incredibly hard to push for progress and improve people’s lives.

Connie: Something that has been amazing is running our photography competition and seeing the amazing talent and beauty that Croydon has to offer! We are incredibly lucky to have so much amazing green space, whilst having the amenities of a large town and it’s just a fabulous place to live. The diversity here means that we have so much culture, languages, food and more, which we find really inspiring.

Omar: I was lucky enough to do a traineeship with the London Wildlife Trust last year. I was based in Croydon a lot and was introduced to reserves and green spaces I either barely knew or hadn’t heard of at all. This was a turning point for me because, strangely, although I loved nature and Croydon, I prevented myself from visiting these wonderful places. Not deliberately, but due to a subconscious feeling that these places weren’t for me. I personally think there’s other people in Croydon who feel like that too, for whatever reason, and I really want Great Big Green Week to be what gets them connected with their local spaces and help them feel a sense of ownership. I’ve seen the coolest things in Croydon’s natural spaces – families of deer prancing around Dollypers Hill in Coulsdon, herds of cows quietly grazing in Riddlesdown, birds that have travelled all the way from Russia who have decided to chill in Upper Norwood, colonies of the UK’s smallest butterfly living their best lives in Hutchinson’s Bank in New Addington. Croydon to me is a reflection of the natural world with all its wonderful diversity, and vice versa. I think that’s inspiring. 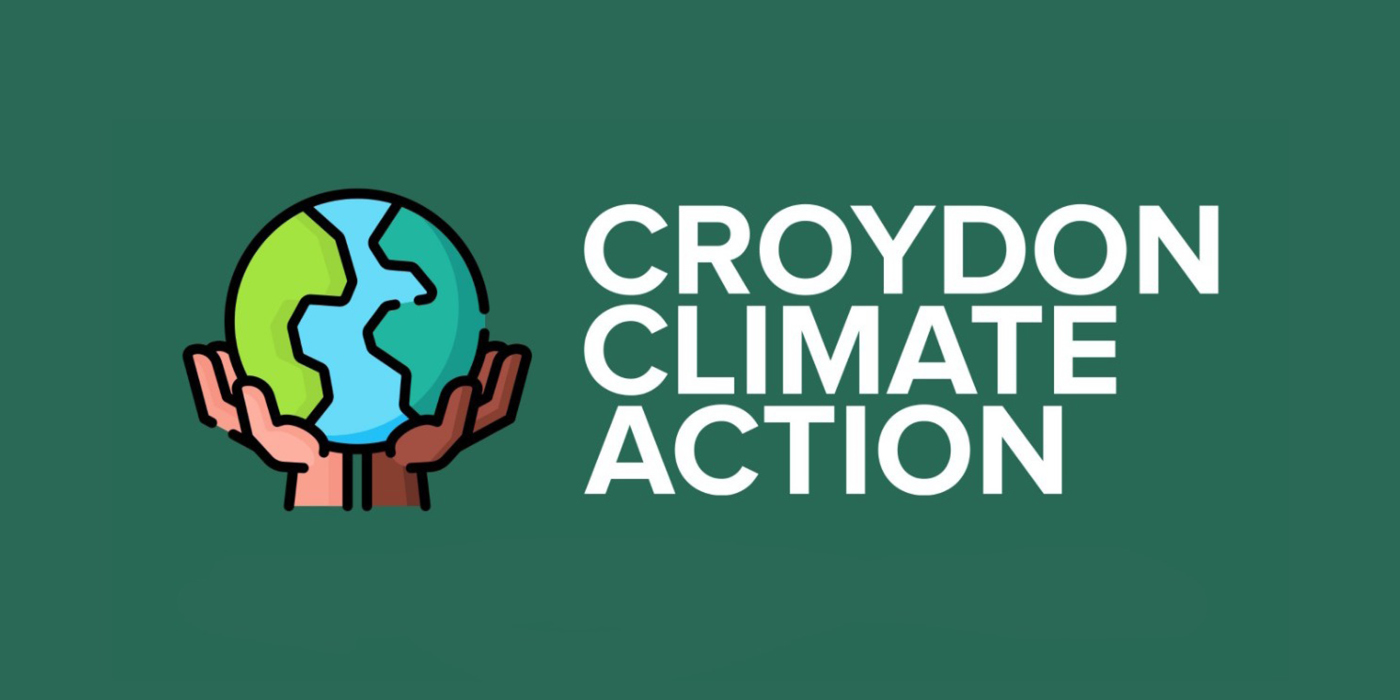 Images courtesy of Croydon Climate Action – header by the Croydonist.

If you missed the other features in our Croydonist climate series you can read them below.

Fourth in our Croydonist climate series was art, with Tina Crawford’s ‘What a Waste’ exhibition – read it again here.